Share
The number of orphan wells sites in B.C. is expected to increase by 300 to 400 this year, from facilities left behind by the bankrupt Ranch Energy. The site pictured is an orphaned and contaminated natural gas well site north of Fort Nelson, owned by the Shanghai Energy Corporation. Photo: Garth Lenz / The Narwhal
In-Depth

‘A limbo situation’: B.C. landowners owed more than half a million dollars after oil and gas company goes bankrupt

Three dozen landowners in the Peace region are left with orphan oil and gas wells on their properties from bankrupt Calgary-based Ranch Energy — a problem that could worsen as more companies become insolvent due to the economic fallout from novel coronavirus COVID-19
Sarah Cox
Mar 18, 2020
8 min read

The first real sign of trouble came in July 2018, when Arthur and Laurel Hadland opened an envelope with news about Ranch Energy, a company that owned two inactive wells on the family’s grain and seed farm in northeast British Columbia.

“I’ve got it right here,” Hadland says over the phone, “Ranch Energy notice and statement of receiver.”

He had heard Ranch Energy wasn’t doing well — “there were rumours … table talk,” he says — but now the company was officially in receivership and rental payments to Hadland’s 97-year-old father for surface leases had stopped.

“He has modest savings. We had set that aside to let him live out his years,” Arthur Hadland says in an interview. “I have a full-time caregiver that looks after him. His eyesight is gone, he’s blind … We’re really eating into his savings right now. This would have helped a lot.”

Hadland says his father, now 99, is mentally sharp and fully understands why he’s no longer getting rent payments for the wells on his farmland. 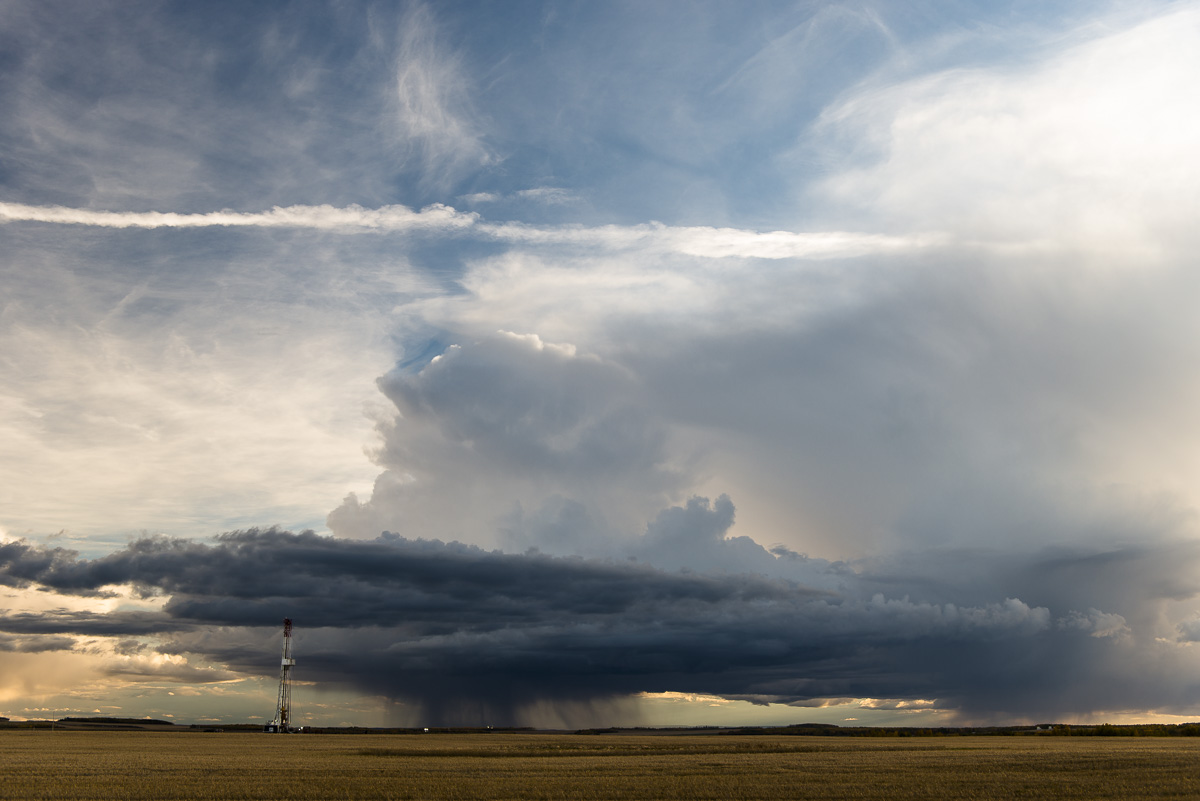 Surface rights board ‘can’t do a whole lot’

The Hadlands did what three dozen other Peace region landowners have done since Calgary-based Ranch Energy slipped into receivership, leaving 700 wells in B.C. and a large, leaking fracking pit with contaminated wastewater.

They filed a complaint with the Surface Rights Board of B.C., which deals with disputes between landowners and companies like Ranch that hold undersurface rights to oil, gas and minerals on private property.

“Unfortunately, the board can’t do a whole lot,” surface rights board chair Cheryl Vickers tells The Narwhal. “The board can make an order for payment, and if it is an operating well the board can suspend the right of entry.”

“But in the circumstances of Ranch, which is in receivership, the wells are not operating … so making an order to suspend the right of entry doesn’t put any pressure on the company to actually pay.”

“On paper there’s a process there to deal with the situation, but in reality it doesn’t provide much or any relief to landowners in this interim kind of period.”

As of February, Ranch Energy owed Austin Hadland $15,000 plus interest, according to orders from the surface rights board. By the end of next month, the company will owe Hadland another $9,600 — for a total of $24,600 plus interest.

To date, the board has ordered Ranch Energy to pay landowners a collective $520,000 plus interest, according to The Narwhal’s review of 89 Ranch surface board orders.

When almost two dozen surface board orders for Predator Oil BC Ltd., the company that sold Ranch the wells, are added in, landowners are owed an additional $87,000, according to board orders.

And those numbers are climbing all the time as rents come due on different dates and go unpaid.

Rent from wells is ‘missing out of our economy’

Les Willms roughly calculated, in an email to Goodings, that $828,000 is “missing out of our economy” due to unpaid rent to landowners.

“The orphan well fund should be making these payments before they get any further behind,” Willms said. “By next summer we will have a third year owed.”

The orphan site reclamation fund, run by B.C.’s Oil and Gas Commission, covers the cost of decommissioning and reclaiming oil and gas wells whose owners have gone bankrupt or can’t be found.

There are 346 orphan wells in B.C. — compared to just 45 four years ago — according to the commission, which is struggling to pay for costly cleanups that could ultimately be the responsibility of B.C. taxpayers.

In an email to The Narwhal, the commission said it has paid approximately $475,000 from the orphan fund to compensate landowners for unpaid rents.

But none of those payments went to landowners who are owed back rents from Ranch Energy, like the Willms and Hadlands.

Why? Because Ranch’s wells have not been designated orphan sites.

‘A limbo situation’ for landowners

Orphan well designations can only be made once bankruptcy proceedings are complete, according to the oil and gas commission, which estimates that 300 to 400 of Ranch’s wells will become orphans this year after others are sold by the company’s receiver, adding to the pile of sites the province is already responsible for cleaning up.

“It’s a limbo situation for the landowners,” Vickers says.

“This receivership has been going on now for a couple of years. The orders are piling up. There’s no ability for the landowners to get any kind of payment unless a well is sold and the new owner takes over and pays.”

Even more landowners are likely to be affected if companies go bankrupt due to a recession caused by the COVID-19 pandemic, Vickers says.

“I suspect there may be other companies that start to have financial difficulties and that are not paying their rent and then we will see more of these applications for unpaid rent,” she says.

“And we’ll just be making more orders for payment that, depending on whether the companies are in receivership or not, are just a piece of paper that says people are owed money.”

Then she received a letter from Paul Jeakins, the commissioner and CEO of the Oil and Gas Commission.

“ … The commission recognizes the challenges faced by some land owners and has been in regular contact with many of them,” Jeakins wrote.

The commission reiterated to The Narwhal that it can only use the orphan site reclamation fund for unpaid rent, including an amount for past losses, “after a site is designated as an orphan.”

Jeakins told Goodings that “there is an on-going bankruptcy proceeding [for Ranch Energy] that may conclude in early 2020 and it’s believed that will provide for a near term resolution on this matter.”

But that’s cold comfort for the Hadlands and Goodings, who say there is not enough money in the orphan site reclamation fund to pay out the landowners and reclaim the idle well sites on their land in a timely fashion.

“The funds to cover lack of lease payments and orphan wells will not be sufficient to do both,” Goodings said in an email to The Narwhal. “There may be a partial payment to the landowners.”

The commission plans to reclaim 15 orphan well sites this year and 25 next year, according to its annual service plan. It’s not known if any of them will be Ranch wells.

But with the commission anticipating a $36 million deficit this year in its orphan site reclamation fund, Arthur Hadland says he’s not holding out much hope his father will receive the money owed to him any time soon.

“I’ve pretty well thrown up my hands,” Hadland says. “The thing is hopeless.”

Getting the rent payment order is the easy part

Vickers says the process for getting an order from the surface rights board for unpaid rent is relatively fast and straightforward.

“There’s no big rigamarole,” she says. “It’s just a question of filling out a form [and] sending us the documentation to support the amount of rent that’s owed and when it’s due.”

The board then writes to Ranch’s receivers, Ernst & Young, who acknowledge the unpaid rents, Vickers says.

“Then we just turn around and issue an order. That part’s easy. Getting the payment is not easy. I know there’s landowners struggling as a result and there’s nothing we can really do to assist them.”

Vickers said the board receives about one application for unpaid rent a week, “sometimes two or three.”

“I’m churning out these orders weekly and until either some of the well sites are sold, or they’re declared orphan wells, that will continue.”

The number of orphan wells sites in B.C. is expected to increase by 300 to 400 this year, from facilities left behind by the bankrupt Ranch Energy. The site pictured is an orphaned and contaminated natural gas well site north of Fort Nelson, owned by the Shanghai Energy Corporation. Photo: Garth Lenz / The Narwhal
Published By

The man who took on the Irving Oil refinery and won

When it comes to those yawn-worthy, overly technical, bureaucratic reviews of major projects like refineries...

Owls, caribou and B.C. forests on the chopping block

With an eye toward the B.C. election, our latest newsletter examines how it seems to...

Serious geotechnical issues and the project's escalating cost make the dam uneconomical, according to two...