Our young Narwhal fans blew us away with their drawings of the famed unicorn of the sea. Here's a look at the stellar submissions
Arik Ligeti
Sep 17, 2020
9 min read

We asked, and boy, did our pod of readers ever deliver. From Qualicum Beach, B.C., to Halifax to south of the border in Boston, dozens of kids sent in superb drawings for our narwhal art contest. Many even took care to craft high tales of the deep seas: there’s Lola the music fan, Maya the speedster, singer-dancer-Santa helper Nora — and many more.

Below are all of the entries, starting with the three grand prize winners. Rest assured, every single artist will receive a Narwhal souvenir. Thanks for participating!

Beatrice Thomson, 11, from Gatineau, Que., submitted this drawing of Sandy and her little baby Narnia. Sandy made a sea cake for Narnia’s birthday and she is bringing it to the party on her tusk.

Ethan Ezekiel, 12, from Ajax, Ont., sent in this drawing. Here’s some background on his submission: “Ethan has always been incredibly passionate about marine animals. One of his absolute favourites are the unicorns of the sea! When I told him about this contest, he got all excited and asked me, ‘Did you know they have tusks that are about 10 feet long?!’ He told me how scientists still don’t know much about these elusive creatures, and that he hoped to learn more about them soon.”

Rebecca Harty, 5, from Bawlf, Alta., sent in this drawing of Narrel. “She is going down to the bottom depths of the ocean with Ariel the mermaid. They are going to find a gem of wisdom to keep the castle safe from falling.”

We couldn’t announce these winners without acknowledging the person that inspired us to launch this contest: Teddy Fribourg, 4, from Brooklyn, New York. Thanks, Teddy!

We also want to shout out these unique submissions:

Lena Desjardins, 10, of Ottawa sent in this submission. Lena also happens to be the daughter of our trusty developer, Chris, who designed The Narwhal’s logo. Talent runs in the family!

Ocea Goers, 9, from Victoria, drew this lively drawing of a narwhal sleepover. Ocea’s party of narwhals may be a reflection about how much these sea creatures are mentioned around the house — she’s the daughter of Narwhal Senior Editor Raina Delisle! 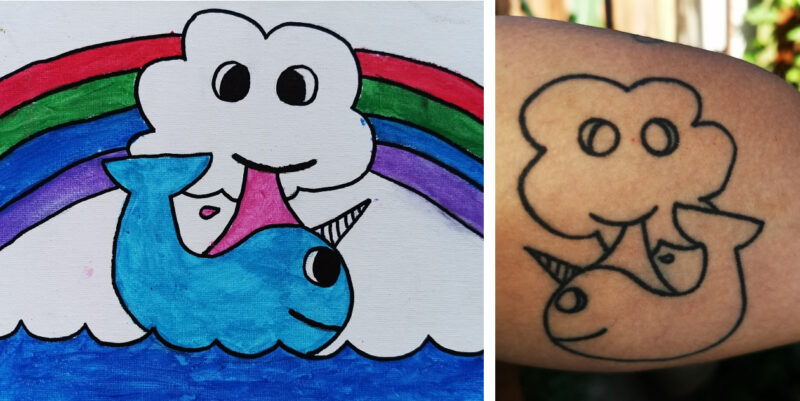 John de Groot’s daughter, Ella Rose, pained this narwhal drawing when she was 10. John liked it so much he got it tattooed on his arm!

This submission comes from Zorza Plachta, 8, near Haines, Alaska. Zorza, whose favourite book is The Animal Encyclopedia, says: “This is a picture of a pod of narwhals swimming around. Narwhals start out mostly blueish grey, and then when they get older they get more black parts, and really old narwhals are almost entirely white. They live up in the Arctic. The picture of these narwhals is of medium young narwhals. The narwhal horn spirals, like a unicorn horn.”

Wesley Audette-Longo, 4, from Ottawa, decided to take a closer look at a solo sea traveller after learning that narwhals sometimes get closed in by shifting ice.

Teegan Walshe, 13, from Qualicum Beach, B.C., sent in this piece of singer-dancer-Santa helper Nora The Narwhal.

Sophie Quinn, 5, of Burnaby, B.C., sent in this piece with a note: “Gnarley the narwhal lives in the Arctic Ocean and she has so many friends. Gnarley loves all of them and so does her friend, Lizzie the mermaid.” 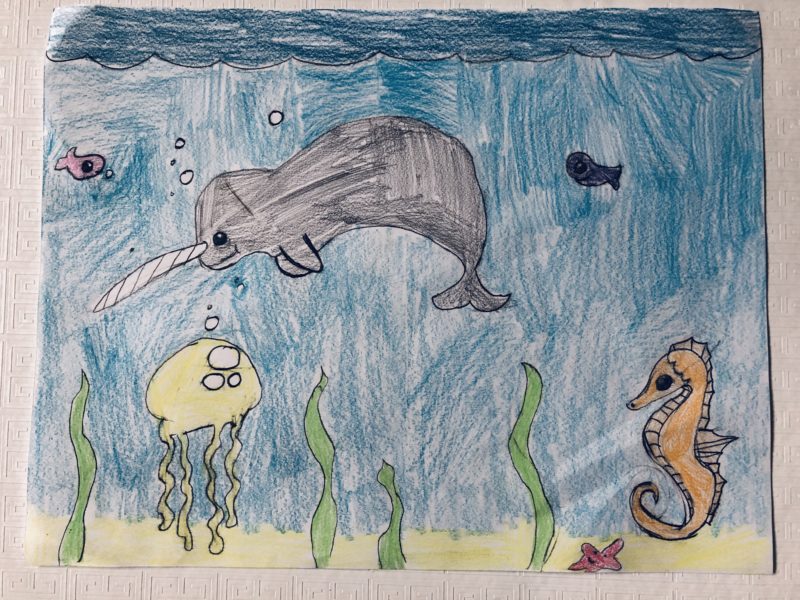 Sofia Dietrich Woods, 9, from Ottawa, wrote this lovely tale to accompany her piece: “Once there was a narwhal named Lola, she loved listening to music and playing with her friends. Once when she and her friends were playing, they saw a polar bear swimming in the water. They were so scared, Lola and her friends swam to Lola’s house. The polar bear just wanted to be friends with the narwhals because they were famous even if they did not know it. The polar bear was sad. He went home after catching a seal for dinner. The next day when Lola and her friends were playing, the polar bear came to catch some fish for lunch when he saw the narwhals playing. He started to cry because he didn’t have any friends of his own and he was jealous of the narwhals. Lola was playing tag with her friends when she heard crying. It was the polar bear that they had swam away from the previous day. She went up to the surface even though her friends warned her not to. She was a bit scared but she did it anyway. The polar bear told her how he didn’t have any friends. Lola felt sorry for him and she invited him to play, but when she went under water her friends had left. So, she played with Bruno the polar bear by herself. When a couple hours passed, Bruno had to go home. Lola had told Bruno that she would play with him tomorrow. The next day Lola’s friends came to play. They weren’t as scared of Bruno as they were the last time. They were still scared though when Lola went to the surface and they followed close behind her. They played with Bruno for hours. When Bruno had to go home, they said, ‘see you tomorrow.’ When Bruno got home, everyone was talking about him and everyone wanted to be his friend.”

Scarlett Selby, 4, from Toronto, sent in this colourful drawing. “Scarlett loves every iteration of unicorns and unicorns of the sea! Since the month of June and Pride, Scarlett has been very taken with all the rainbow flags around Toronto. They have inspired the creation of her Rainbow Narwhal.”

This sparkling gem comes courtesy of Ramona Geikie, 9, from Halifax.

Nina Mazereeuw, 12, from Boston, sent in this lovely drawing and a dark tale from the high seas.

Nikita Montplaisir, 11, from Montreal, likes narwhals because they are often pictured to represent the letter N, which is the initial of her name. This drawing, and the waffle, were inspired by the books of Ben Clanton. Nikita loves waffles too!

This drawing comes from Mya Gushue, 7, from Halifax.

Matilda Varteniuk, 7, sent in this drawing and tale of Maria and her friends.

Lia Mosher, 8, from Halifax, sent in this sparkling piece.

Kingston Sullivan, 6, sent in these narwhals named Toadette and Toad. “They are 15 years old and are married with no baby narwhals. They live in a frosted glacier and their favourite food is super mushrooms They are special because of their tusks and Toad has two tusks.”

Kenna Zenner, 9, sent in this piece of a little narwhal family.

Kalia Klassen, 4, from Abbotsford, B.C., sent in this drawing featuring herself and her little sister, Nina, riding on top of a narwhal named Kalila. Kalila the Narwhal has a colourful tusk and long orange and red hair.

Kaitlyn Harry, 4, from Bawlf, Alta., sent in this drawing of Spotty. He is going to eat lunch — the seaweed around him.

Jimmy Ladubec, 4, from Waterloo, Ont., sketched this piece of Narcal. “Narcal has had hundreds of narwhal babies and one looked like a shark, but then it turned out just to be a crumb. Narcal is special because he is magical and even though he is a boy he can have babies. His spots make him magical.”

Isabelle Curran of Rhinebeck, New York, sent in this drawing of Mr. Willy.

Emily Audette-Longo, 7, from Ottawa, explored escape possibilities for narwhals that get caught in shifting sea ice.

Eleanor Dobson, 3, from Calgary, sketched this abstract piece. Eleanor loves narwhals — mostly reading her narwhal books, so she thought it should be wearing glasses.

Daisy Varteniuk, 9, from Kitchener, Ont, drew this piece of Maya, a “super fast” and curious narwhal.

Alexander de Groot, 10, sent in this piece of some very classy and cool narwhals.