BC Hydro deeply regrets the impacts of the W.A.C. Bennett Dam on First Nations and will not repeat the “mistakes of the past,” Hydro’s Deputy CEO Chris O’Riley said Thursday at the unveiling of a new First Nations gallery at the dam’s visitor centre.

“While we remain very proud of the engineering marvel that is the Bennett dam, and we continue to be thankful in this province for the prosperity that it underpins, we recognize a need to acknowledge those parts of the picture that we can’t be proud of,” O’Riley told representatives from six First Nations in the Peace who gathered under a tent in the rain, overlooking the two kilometre-long dam.

“We recognize the need to acknowledge the adverse impacts of the dam on the environment and on the original people of the land. We think this acknowledgment is a really important part of reconciliation,” said O’Riley.

When the Bennett dam was completed in 1967 and the floodwaters of ten rivers and creeks converged to form the massive Williston Reservoir, local First Nations were not even informed, much less consulted.

Some, like Emil McCook, the former chief of the Kwadacha First Nation, were caught unaware as churning waters submerged First Nations riverboats. McCook, then a teenager, plucked a young boy from the rising water after one boat overturned, a story he recounts in a documentary video, Kwadacha by the River, part of the new First Nations gallery. 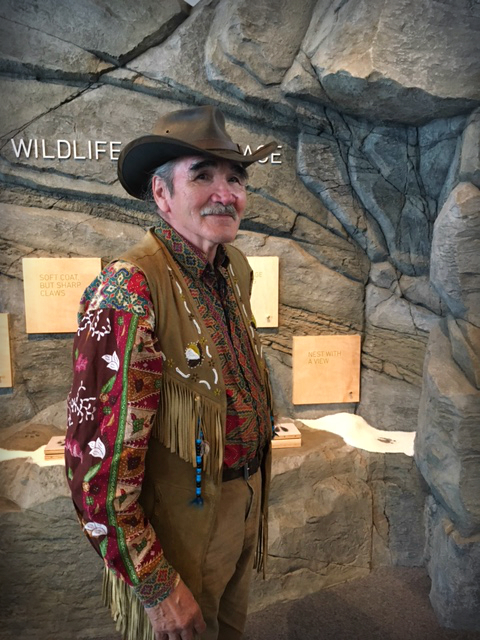 The gallery is titled “They Call It Progress, We Call it Destruction.” It was largely the work of a Peace Aboriginal Advisory Committee that collected stories from many First Nations members about the Bennett dam’s devastating impact on aboriginal communities who relied on the flooded rivers for travel, food, contact with relatives and other villages, and cultural and spiritual purposes.

The stories on the walls of the gallery tell a chilling tale of the reservoir’s largely-undocumented impacts on First Nations, which included severing the migration route of caribou that had provided them with food, tools, clothing, and other important materials: “We lost a way of life that used to provide us with so much and we got nothing in return.”

“…it was a death trap for the animals.”

“Many of our gathering sites and the trails leading to them were destroyed.”

“We can’t change that, we can’t bring it back,” McCook said in an interview after the ceremony. “But how can First Nations benefit from the resources? Over the years hopefully they will listen to First Nations.”

McCook said the Kwadacha First Nation still lacks hydro power and gets its electricity from a diesel generator.

Throughout the ceremony and speeches, one contentious subject was carefully side-stepped by both BC Hydro and First Nations members. Not one person mentioned the controversial $8.8 billion Site C dam currently under construction on the Peace River 100 kilometres downstream from the WAC Bennett Dam.

Site C, when complete in 2024, would flood 107 kilometres of the Peace River and its tributaries, including the traditional land of Treaty 8 First Nations.

Contrary to O’Riley’s promise that BC Hydro will not repeat the mistakes of the past, the Joint Review Panel that examined Site C for the federal and provincial governments concluded that the dam and its reservoir would “significantly affect the current use of land and resources for traditional purposes by Aboriginal peoples.”

The panel disagreed with BC Hydro regarding Site C’s impact on fishing and hunting opportunities and practices for Treaty 8 First Nations, concluding that the project would likely cause a “significant adverse effect” that “cannot be mitigated.”

Three Treaty 8 First Nations, all of them represented at the visitor centre opening, have on-going court cases against the Site C dam. Three legal challenges were launched by the West Moberly and Prophet River First Nations.

A fourth legal case, launched by the Blueberry River First Nations, claims that the cumulative impact of Site C and other industrial development has infringed on the Nations’ treaty rights. A fifth court case against Site C by the Peace Valley Landowners Association, representing 70 landowners who will be affected by the dam, is also still in progress.

“We’re not in support of Site C,” McCook said in the interview. “We have to work with our First Nations brothers that live down the valley. Site C is going to be hurtful to our neighbours down here.”

The Tsay Keh Dene, one of the First Nations most affected by the Bennett Dam, was not represented at the visitor centre gathering or in the First Nations gallery. A quote on the gallery wall from Tsay Keh Dene Chief Dennis Izony said his people had decided not to contribute to the impacts gallery “due to the on-going trauma and lasting effects of the creation of the reservoir on our nation and its people that has yet to be resolved.” Neither the Tsay Keh Dene nor the Kwadawa belong to Treaty 8.

In 2009, the year before the B.C. government announced it would seek regulatory approval for Site C, the province reached a settlement agreement with the Tsay Keh Dene over the development of the Bennett dam and Williston Reservoir. That agreement provides the Tsay Keh Dene with a one-time payment of $20.9 million and annual payments of $2 million.

O’Riley acknowledged that sharing stories of the impact of the dam and reservoir had brought up painful memories for some First Nations members. He thanked those who participated in the process and said BC Hydro respected that others were not ready to discuss the Bennett dam’s “deep and profound and painful” impacts.

“The door is forever open to have that conversation when the time is right.”

Premier Christy Clark has vowed to push the Site C dam  “past the point of no return” and BC Hydro continues to fast-track construction despite multiple requests by the West Moberly First Nations and others to pause until legal cases are resolved.

Image: Drummers at the opening of the gallery at the W.A.C. Bennett dam. Photo: Sarah Cox