By Emma McIntosh
Share
A truck passes a sign marking the beginning of the Greenbelt, east of Toronto. Ontario Premier Doug Ford's re-election strategy has so far leaned heavily on the Bradford Bypass and Highway 413, both projects that would run through the protected area.
Photo: Christopher Katsarov Luna / The Narwhal

The federal government has declined a second time to intervene on Ontario’s plans to build the Bradford Bypass highway project through the protected Greenbelt north of Toronto. Environment Minister Steven Guilbeault confirmed the decision Thursday in a letter to a local advocacy group, which was shared with The Narwhal.

Late last year, environmentalists asked the Trudeau government to reconsider its May 2021 decision against designating the highway project for federal environmental assessment, as the bypass faced increasing scrutiny over its impact on the Greenbelt and questions about the provincial government’s transparency. But Guilbeault has sided with his predecessor Jonathan Wilkinson, allowing the signature Ford government project to go full-steam ahead.

In his letter, Guilbeault wrote, “there is no basis to revisit the former minister’s determination.”

The Bradford Bypass and its sister highway, the 413, are cornerstones of the Ford government’s re-election strategy. The province is fast-tracking the highway, with plans to put shovels in the ground on early works like bridges this spring.

Environmentalists said Guilbeault’s choice flies in the face of the federal government’s stated commitments to advance climate action, pointing to the emissions a new highway full of cars could generate. They also said the consequences for the Greenbelt and nearby Lake Simcoe could be disastrous.

“It shows that even though Guilbeault is saying he wants to do things differently, the fact of the matter is … it’s going to be status quo,” said Margaret Prophet, the executive director of the Simcoe County Greenbelt Coalition, one of the groups that requested a review from the Impact Assessment Agency of Canada.

If built, the Bradford Bypass would connect Highway 400 and the 404, the two main highways drivers use to go north from Toronto. Though environmentalists have long opposed the plan, many locals frustrated with clogged roads have supported it. The Ontario Greens and NDP have called for the project to be cancelled, while the provincial Liberals have said it should be subjected to a more in-depth review.

Much of the highway’s 16.2-kilometre path would pass through farmland. It would also cross the Holland River, which drains into already-threatened Lake Simcoe, and slice through a delicate section of the Greenbelt called the Holland Marsh, which includes protected wetlands and endangered species habitat. The Holland Marsh is nicknamed “Ontario’s vegetable patch” because of its fertile soil for agriculture.

Ontario Transportation Minister Caroline Mulroney has argued that the Bradford Bypass would help relieve traffic as the region grows, betting that people who live in the commuter cities around Toronto will agree: “As Ontario welcomes millions of new people every five years, the problem is only going to get worse,” she said in November.

Decades of research show that building more roads tends to attract more drivers instead of solving traffic woes, a concept called “induced demand.” Though they sometimes bring some amount of temporary relief, before long the new lanes are just as slow as the old ones. It’s an “outdated playbook,” Prophet said.

“(It) has been shown time and again to not work,” she added.

The idea of an east-west highway between the 400 and the 404 is decades old. It last received an environmental assessment in 1997, before provincial policies protecting the Greenbelt, the climate and Lake Simcoe existed. At the time, the review found road salt could contaminate groundwater and the Lake Simcoe watershed, the highway could cause issues with air pollution and that the Chippewas of Georgina Island First Nation, based on Lake Simcoe, had concerns about archaeological sites along the route.

The province shelved the bypass in the 2000s under Liberal Premier Dalton McGuinty. But his successor, Kathleen Wynne, put it back in Ontario’s long-range plans in 2017. It sat dormant for another two years before the Progressive Conservatives started pushing it forward in 2019.

For a long time, the bypass flew under the radar as the 413 captured more public attention. The federal government has intervened on the 413. Last May, citing public concern over the highway, impact on endangered species and issues that might not be mitigated by the Ford government’s “streamlined” review process, it announced its own assessment, which could take months or possibly years. But it declined to do the same with the bypass, finding that Ontario’s environmental assessment rules would be enough oversight.

“And at that time, there wasn’t a lot of ground organizing on the bypass,” said Laura Bowman of Ecojustice, one of the groups advocating against the project.

But the project returned to the public radar in October 2021, when the Ford government exempted the bypass from having to undergo a new environmental assessment. The province said it would still conduct a series of studies on the project, but didn’t commit to finishing or publishing them before starting construction.

“With the exemption in place, obviously, the game had changed considerably,” Bowman said. There were other shifts too: since the original decision, the Supreme Court of Canada ruled against Ontario, Saskatchewan and Alberta that the federal carbon tax was valid, which environmentalists thought would shore up their arguments about Ottawa’s jurisdiction on climate issues.

A Toronto Star/National Observer investigation in late October showed that the province is seeking to re-route the Bradford Bypass around a golf course co-owned by the father of Progressive Conservative MPP Stan Cho, touching off a firestorm at Queen’s Park. The findings sparked an investigation by Ontario’s integrity commissioner, who found neither Cho nor Mulroney violated ethics rules. (Cho, who was appointed associate minister of transportation after ministry staff pitched the route change, said he has declared a conflict of interest on the file. Mulroney’s office said the route change was aimed at minimizing impact to the Holland River).

“At no point has there been direction, pressure or suggestion from Minister Mulroney, Associate Minister Cho, or political staff during this technical process,” a spokesperson for the Ministry of Transportation said during the fallout.

Environmentalists cited the provincial exemption and the public concern sparked by the investigation when it sent a letter to Guilbeault days later, asking him to take another look at the bypass. They also say they had hoped the new environment minister, who has a history of climate activism, would be more open to their cause — his mandate letter included a direction to “provide funding to protect and restore” Lake Simcoe.

In the meantime, seven municipalities in the area have called for more in-depth studies of the bypass, though the communities directly along the route remain in favour.

In his letter, Guilbeault wrote that there have been “no material changes” to the project since Wilkinson’s decision last year.

The federal government has “a lot of questions to answer around consistency of decision making, as between this and Highway 413, there are a lot of similarities,” Bowman said.

“The reality is, it goes through the same species at risk habitat that was the basis for the designation of the 413. It has similar greenhouse gas emission implications.”

What’s next for the controversial highway project?

Without the prospect of a federal impact assessment, the Ford government is free to keep pushing forward its plans to start work on the bypass. It started soliciting bids to design and build a bridge for the highway in November.

Although the Progressive Conservatives want to start early works in the coming months, the project’s preliminary design isn’t expected to be done until December 2022, with the highway complete by 2024. Its final price tag also isn’t clear yet: the province has said the project would cost $800 million, but the Toronto Region Board of Trade estimated it could be $1.5 billion.

Even so, the project’s future isn’t guaranteed. Ontario is a few months away from an election. Polls indicate a Progressive Conservative victory isn’t a certainty, and all of the opposition parties at Queen’s Park are either calling for the bypass to be cancelled or re-examined.

Banner: A truck passes a sign marking the beginning of the Greenbelt, east of Toronto. Ontario Premier Doug Ford's re-election strategy has so far leaned heavily on the Bradford Bypass and Highway 413, both projects that would run through the protected area.
Photo: Christopher Katsarov Luna / The Narwhal
We hear it time and time again:
“These are the stories that need to be told and you are some of the only ones telling them,” John, a new member of The Narwhal, wrote in to say.

Emma McIntosh
Emma McIntosh is a reporter based in Toronto who really likes being outside. She started her career in newspapers, working for the...

Can sweetgrass sequester carbon? Piikani Nation plans to find out

Studying the carbon capturing capabilities of sweetgrass is just one part of a larger vision...

As we mark the National Day for Truth and Reconciliation, reporter Steph Wood reflects on... 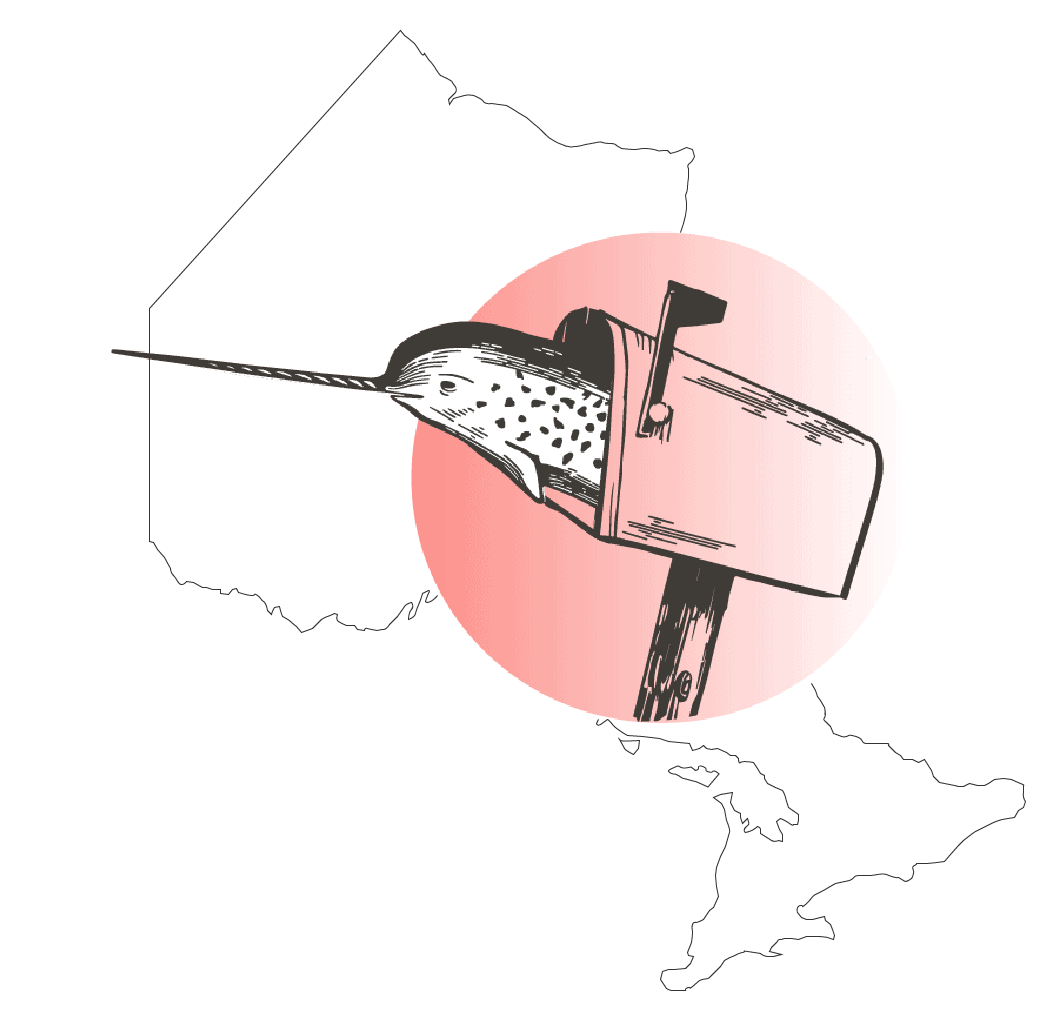