Canada is failing to track the true climate cost of clearcut logging in boreal: report

Greenhouse gas emissions created by logging in Canada’s boreal forest aren’t being properly regulated or accounted for, threatening the country’s ability to meet its 2050 climate targets, according to a new report released on Thursday.

The report by the Natural Resources Defense Council, Nature Canada and Environmental Defence challenges the “creative accounting” that has allowed industry and government to claim that forestry in Canada is carbon neutral.

“Industry has perpetuated a narrative of perfect regrowth: for every tree cut down another one is regrown,” Jennifer Skene, the report’s author and an attorney with the Natural Resources Defense Council, said in an interview.

“When you cut down a forest in the boreal, it’s not returning. And this has a very devastating impact not just for species but also for the climate.”

While industry has long maintained that harvested forests will eventually regain their ability to sequester carbon dioxide if new trees are planted, Skene pointed to evidence to the contrary.

She cited a recent study in northern Ontario that found 14 per cent of clearcut areas simply will not regrow, even decades later. Logging roads and other infrastructure used during harvesting compact the soil and render it useless for replanting.

Without those forests growing back, more carbon dioxide ends up in the atmosphere. Skene said if deforestation in Ontario continues at the current rate, by 2030 an extra 41 million metric tonnes of carbon that could have been captured by boreal forests will end up in the atmosphere. That’s the equivalent of nearly nine million cars on the road for a year.

Canada’s boreal forests represent 25 per cent of the world’s remaining forests, swooping across at least part of every province and territory, and covers a broad swath of northern British Columbia. Eighty per cent of this massive ecosystem is intact. 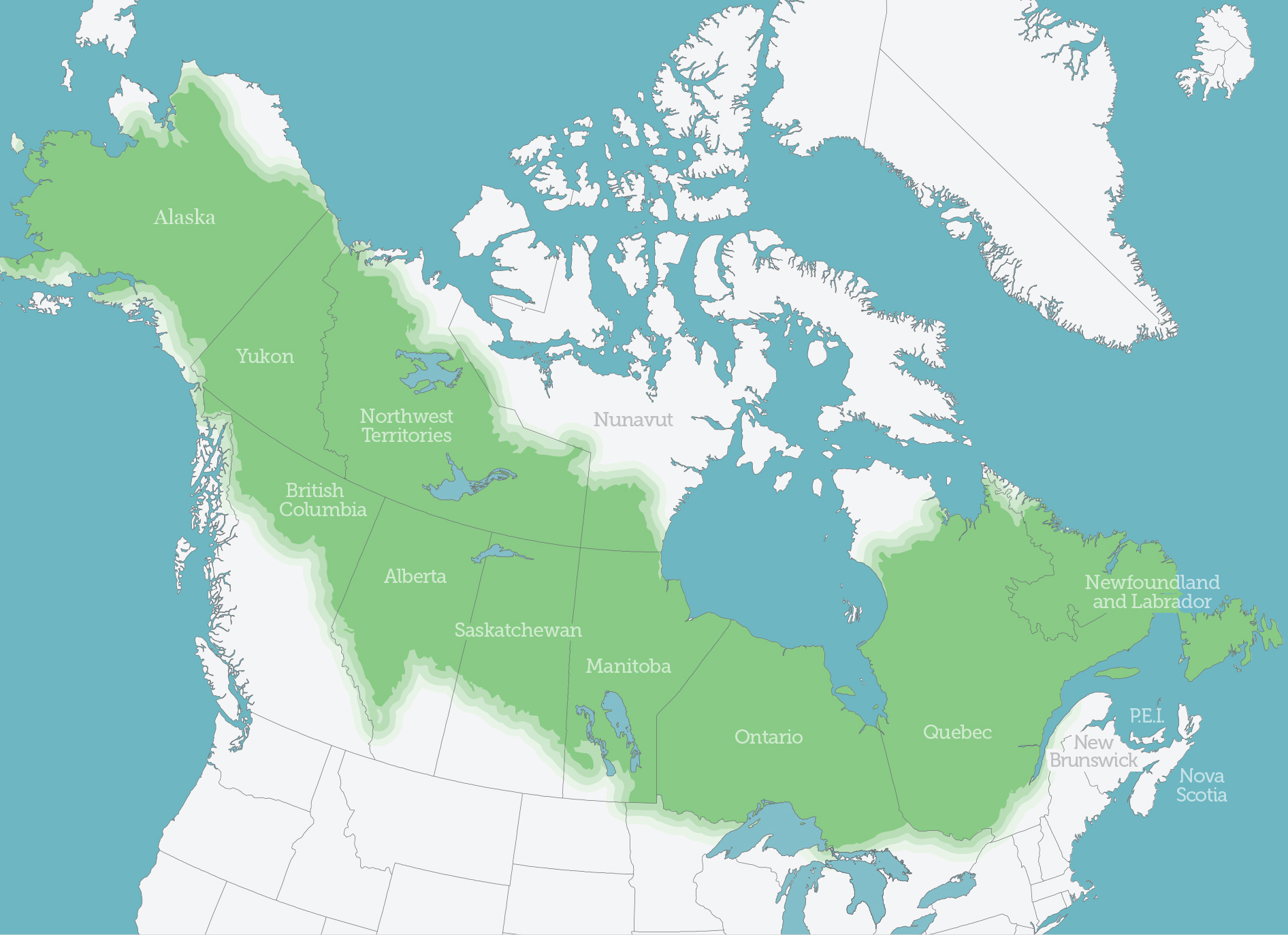 The boreal forest swoops across at least part of every province and territory except for PEI and Nova Scotia. Map: Boreal Songbird Initiative

“When it comes to addressing climate change, Canada’s boreal forest is globally significant,” Graham Saul, executive director of Nature Canada, said in a teleconference. “Per acre, it stores about twice as much carbon as the Amazon forest.”

More than 80 per cent of that carbon is stored in boreal soils. Clearcut logging disturbs the soil and releases the carbon into the atmosphere.

Saul said Canada has an opportunity to set a positive example by following through on its commitments to nature-based climate solutions — planting trees, restoring wetlands and other projects aimed at storing carbon — but the government first needs to acknowledge the actual emissions associated with the logging industry and include them in its climate targets.

‘The atmosphere does not recognize creative accounting’

Under the rules set out by the Intergovernmental Panel on Climate Change, Canada uses modelling instead of direct data for its reporting on greenhouse gas emissions produced by the logging industry. According to the report, this method fails to accurately account for areas that do not regrow and makes conservative assumptions about the amount of carbon stored in boreal soils.

“The way in which emissions are being counted under the model that Canada is using is very problematic,” Skene said. “Unfortunately, while we may be able to creatively account for these things, the atmosphere does not recognize creative accounting.”

She explained that one aspect of this “creative accounting” is the concept of harvested wood products.

“Embedded in a lot of federal and provincial policy is this idea that logging can actually be a climate solution,” she said.

The basic premise is that a tree left to die naturally will release carbon dioxide into the atmosphere as it decays. Cutting down that tree and using it to create a “long-lived harvested wood product,” such as lumber for house construction, stores that carbon. At the same time, if a new tree is planted, it absorbs more carbon dioxide from the atmosphere.

Unfortunately, Skene said, “that’s an incredibly misguided and dangerous strategy.” In reality, much of the boreal forest is logged for short-lived products such as toilet paper, newsprint and biofuel.

In the teleconference, Dale Marshall, national climate program manager for Environmental Defence, pointed out that disturbing land through industrial logging emits well over 100 million tonnes of carbon in Canada per year.

“A significant portion of the trees that are cut are not brought to market and are left to decay on the forest floor,” Marshall said.

“Because they are not incorporating data around these logging scars and adopting relatively conservative assumptions around things like soil carbon loss and not incorporating the climate impact of carbon loss from mosses, it is actually showing the managed forest to be a net carbon sink,” said Skene. “And that’s very much feeding into industry’s narrative that it’s climate friendly, it’s something that can be ramped up. And that’s very misrepresentative of what’s actually happening on the ground.”

Logging emissions should be subject to carbon tax, report recommends

The potential for the industrial logging to be sustainable exists, Saul said, and proper management of Canada’s boreal forests is essential to mitigate global greenhouse gases.

“Overall, our findings and recommendations are intended to help Canada achieve its climate commitments,” he said.

The report calls on the federal government to integrate logging emissions into its national carbon pricing program under the Greenhouse Gas Pollution Pricing Act, a carbon tax largely aimed at the fossil fuel industry.

The report suggests that revenue generated through this could then be used to develop sustainable forestry management and work with Indigenous communities across the boreal region.

“As the Canadian government pursues a more resilient, just, sustainable future, it will need to prioritize the protection of the boreal forest’s value for the climate,” the report concludes.

Banner: A clearcut in Ontario's boreal forest. Photo: River Jordan / NRDC
We hear it time and time again:
“These are the stories that need to be told and you are some of the only ones telling them,” John, a new member of The Narwhal, wrote in to say.

The complicated ethics of wildlife photography

Captivating photos can benefit animals by raising awareness for conservation issues, but there’s a thin...