“Frankly, we need an army of carpenters, electricians and contractors going out to plug leaky buildings,” federal Green Party leader Elizabeth May said during the August 6 leaders debate. “Thirty per cent of carbon pollution comes from the energy we waste and the money we waste heating the outdoors in the winter and cooling it in the summer.”

The suggestion’s an awfully good one. Especially in Alberta.

For one, the thousands of contractors out of work due to the oil price slump could serve as potential soldiers in this so-called army.

There’s also enormous untapped energy-saving potential in Alberta: in fact, it’s the only province or state in North America that doesn’t sport a long-term energy efficiency program — that sure means something when 55 per cent of Calgary’s emissions can be attributed to electricity generation.

Plus, interest rates are extremely low, giving municipalities and provinces plenty of incentive to borrow for projects like energy audit grants and real-time energy feedback.

“I think everybody should be interested in taking some [energy efficiency] action on and seeing action taken on,” he said. Alberta “stopped doing it so we never really had that success to build on as we move forward like a lot of other jurisdictions are doing.”

Alberta had a government branch devoted to energy efficiency until Ralph Klein became premier in 1993 and eliminated it.

Since then, the province has introduced two short-term efficiency programs: the most recent ending in 2012 that gave out just over $50 million in the form of 173,000 purchase rebates for newer and more efficient clothes driers ($100), hot water systems ($300) and furnaces ($600).

Nothing has since replaced it. There was a lingering promise to renew energy efficiency programs from within Alberta’s Ministry of Environment, but that idea was perpetually deferred by former Premier Jim Prentice. 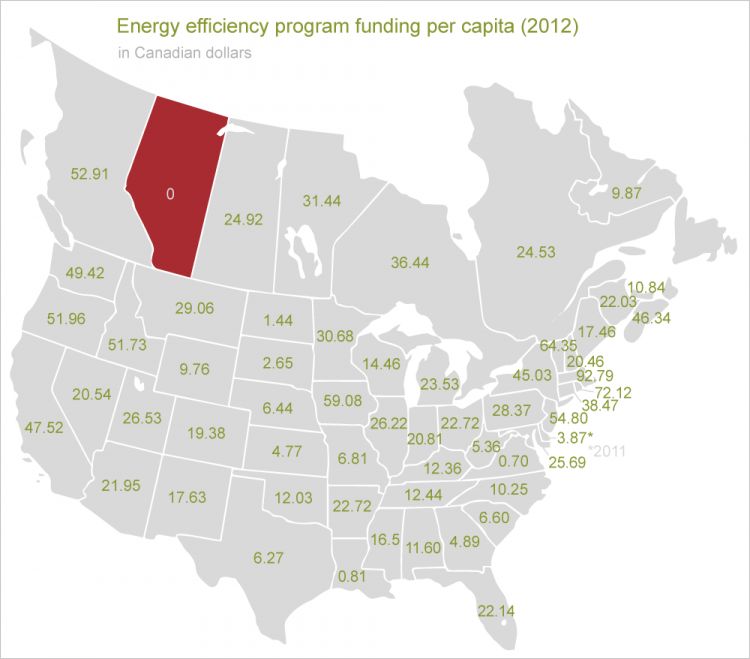 C3 delivered 23 programs — many of which related to energy efficiency — and helped found, among other groups, the Alberta Energy Efficiency Alliance.

“We lost a lot of capacity when C3 shut down,” Row said. “It is capacity that needs to be rebuilt to get on board with what everyone else is doing and actually having some energy efficiency programs in this province.”

Row said the Climate Change and Emissions Management Fund, which houses money from Alberta’s carbon levy program, could easily be tapped to finance such endeavours; around $100 million could successfully fund a middle-of-the-road program, saving money ($460 million per year), create jobs (some 3,800) and cut emissions (up to 27 megatonnes by 2020).

There is currently around $75 million waiting to be put to use cutting greenhouse gas emissions in Alberta. But the money requires projects.

The provincial government, under the former Progressive Conservatives, issued a request for new program proposals last August, but Premier Prentice delayed the effort for unknown reasons.

Row said the failed attempt to get money flowing to new pojects was “quite a disappointment.”

But because the request for proposals is only on hold — not cancelled — the newly elected NDP government could resurrect it at any point.

In June, Premier Rachel Notley told reporters: “there’s no question that energy efficiency efforts and initiatives will be a key pillar in [our climate change] strategy.”

But Alberta has seen some important successes.

The City of Calgary was also the first municipality in Canada to implement a LEED building policy, Doran said.

“I like to think we’re getting to the point where we’re no longer talking about how much it costs if we do it, but how much it’s going to cost if we don’t,” she said.

“We’re seeing some of the large private firms start to recognize that if they’re looking for investors in their project, those investors are looking for the greening of that bricks and mortar infrastructure as well as if they see it as good, long-term investment.”

New national building code recommendations released in 2012 are only just now being adopted by Alberta. The province’s building standards haven’t been updated for three decades, so there is significant room for improvement (codes concerning large buildings will come into effect in November, while residential regulations will be implemented in May 2016).

There are plenty of other jurisdictions to look to as role models: California, Ontario, Nova Scotia. The first step for Alberta, Row said, is simply to get started.

James Wilt is a freelance journalist based in Winnipeg, Manitoba. He holds a journalism degree from Mount Royal University in…