The Mine Next Door Part 1: KGHM Ajax Open-Pit Mine Proposal Within Kamloops City Limits

Tony Brumell is a poet, a fisherman and a former miner, happily retired in Kamloops B.C. He’s the kind of man that doesn’t have an email address or a laptop. He drives a red pick-up truck with a wooden canoe strapped to the top—ready to cut into the lake at a moment’s notice. Tony is the first to point out that he shouldn't have to meet with us, that his time should be spent canoeing Jacko Lake and dreaming up new lyrical ideas. Instead he volunteers his time to take anyone who’ll listen on environmental tours of the proposed site for KGHM Ajax open-pit gold and copper mine.

It was a grey day in August—a luxury in the Okanagan where mid-summer temperatures can reach upwards of 40˚C—when we, a group of writers and researchers from DeSmog Canada, met with Tony and some members of local preservation organizations. Tony took us on his tour of the rolling hills and glassy lakes that could soon be replaced with a dusty open-pit mine and tailings storage piles.

As a miner and an environmental activist, Tony understands the scale and implications of the project very well. Throughout his career, he’s been involved in everything from blasting, scaling, slope stabilization to surveying. He knows exactly what a mine like Ajax will mean for Kamloops and he is extremely worried. 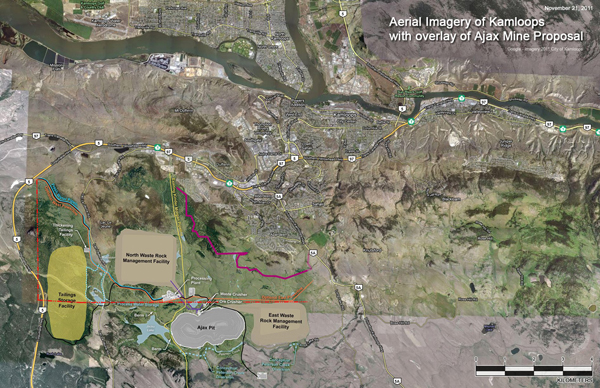 Tony and a group of folks from the Kamloops Area Preservation Association (KAPA) and Kamloops Concerned Citizens (KCC) met us fully prepared, with fruits from their gardens and chairs to sit on while they confessed their concerns about the project.

Dianne Kerr, a member of the KCC and KAPA, is a former City Councillor, Chair of the Economic Development Committee, and member of the City Planning Commission. She told DeSmog that she thinks the mine “[is] too big and too close.”

Kerr and KCC co-member, Sandra Abraham, helped to produce the informational video, “Is This The Future of Kamloops?” which outlines the many dangers for Kamloops residents with regards to mining developments.

It has been the goal of Dianne and these organizations to inform the citizens of Kamloops of the disaster that could be at their doorsteps. KAPA and KCC are concerned that residents aren't taking the threat seriously enough. Since Kamloops has an extensive history of mining and resource-based developments, KAPA and KCC fear that may have set a precedent with residents and politicians that mining is generally benign.

Tony tells us the local mining projects of the past were “nothing of any significant size compared to the proposed KGHM pit." He adds that despite the small scale of previous mining activities, the area is only just beginning to recover the migration of wildlife that once flourished in these lakes and hills. A similar recovery from such a large project as Ajax isn't likely, says Tony.

“This mine will do things to this part of the country that will alter it forever. All of this habitat and recreational area will be gone.” 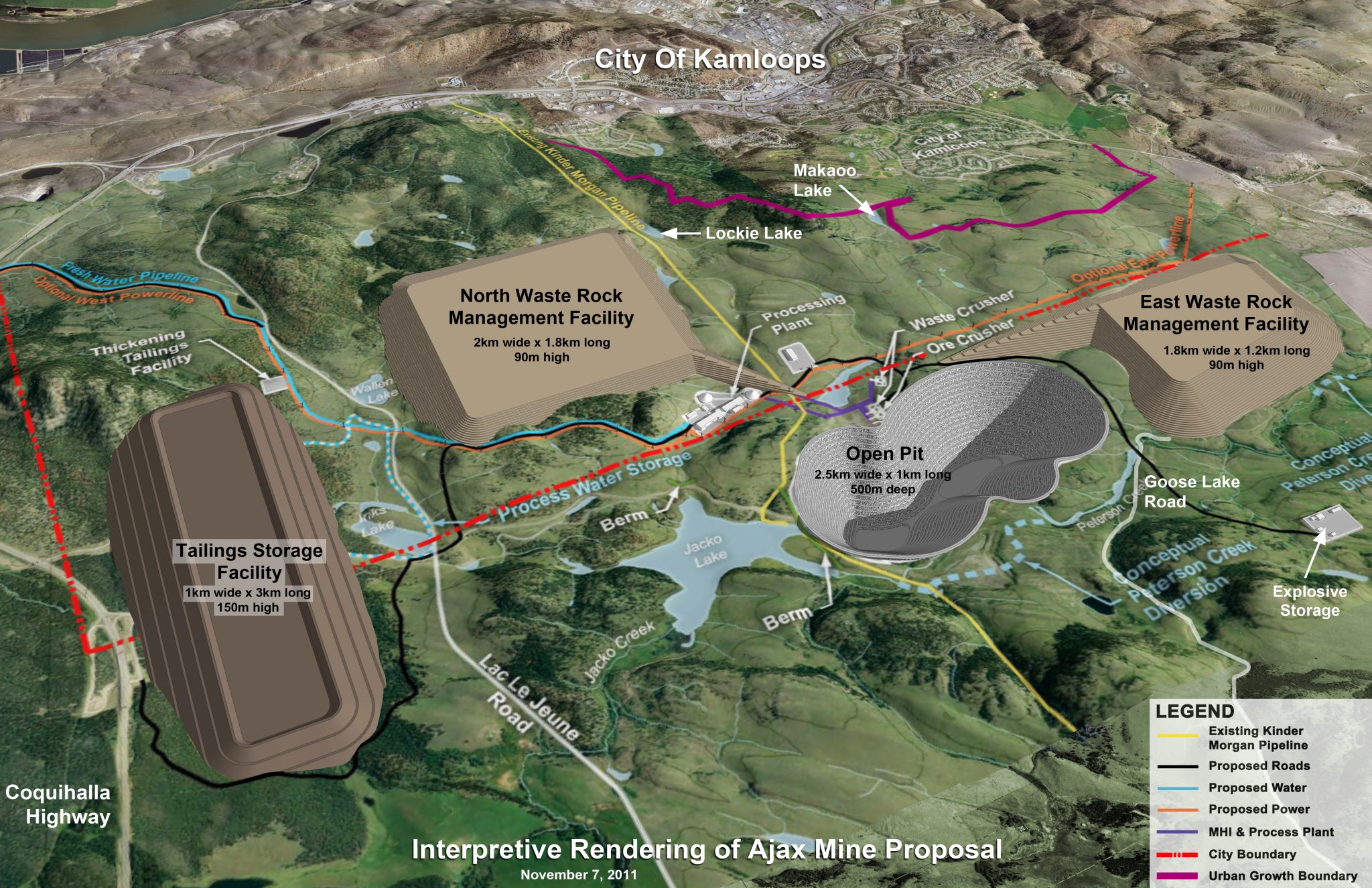 The Ajax project is much larger than anything ever proposed in Kamloops. While on our tour, Tony asked us to turn and look at Sugarloaf Mountain, the tallest peak in sight, roughly 1640 feet away.

“And that’s not the big deal” he continued. “This thing is going to be 10,000 feet long. Do you know how long the Bennett Dam is? About 7000 feet—a billion cubic metres of tailings material.”

According to the current plans, KGHM plans to construct two massive waste rock dumps. There is concern that the massive weight from rock and tailings facilities and vast amounts of water for dust control could cause stability problems in the area caused by falling water tables.

Ajax is a low-grade copper mine, expected to be a 60,000 tone-a-day operation with a waste rock to ore ratio of 2.4-1. Which means for every tone that is removed, 2.4 tones will be removed as waste rock.

Strategic ore stockpiles and waste rock storage piles will be anywhere from 310-725 metres away from the city and could reach as high as skyscrapers. The tailings pile would be loaded with the toxic chemicals used in the extraction process, which could wash away into aquifers and lakes via rainwater, snow, and road treatment.

The open pit and the processing plant will require KGHM to blast into 20 to 25 square kilometres around the western perimeter of town. The nearest construction site will be a mere 1.25 km away from housing in the Aberdeen neighbourhood and the Pacific Way Elementary School.

KGHM told DeSmog that they are unconcerned about the proximity to the city. "There are many examples of open-pit mines in close proximity to communities and neighbourhoods – much closer even than the proposed Ajax Project. For example, our mine in Nevada is directly adjacent to a residential area."

However, revised plans for the Ajax project have placed the construction somewhat further away from residential zones. When asked about these reconsiderations, they told DeSmog: "The company has listened to area residents and taken an opportunity to reconfigure the project to lessen their concerns." 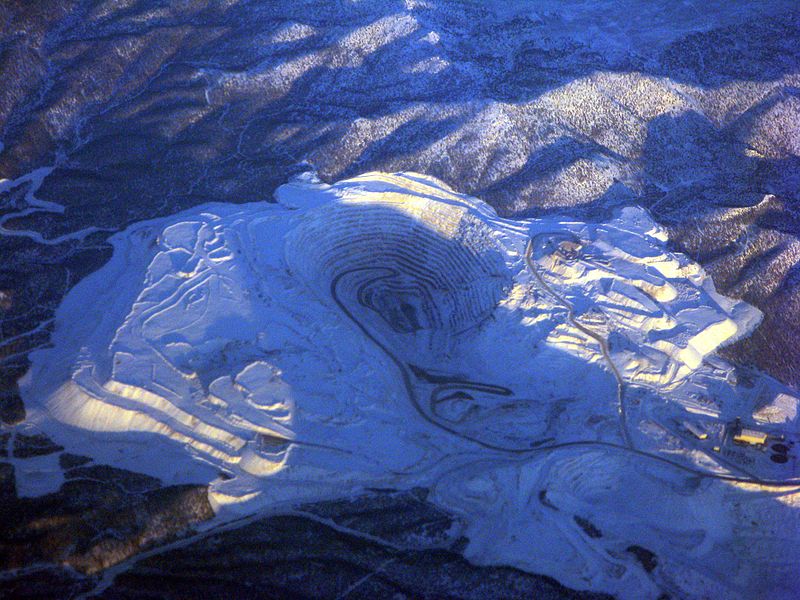 According to the Ajax Feasibility Study done by Abacus Mining and Exploration Corp, “the project is expected to generate Criteria Air Contaminants (CACs) (particulate matter and atmospheric emissions) from surface disturbance and fossil fuel combustion during construction, operations, decommissioning and reclamation of the project. Fugitive dust is expected to be the major emission relevant to air quality and the primary concern for nearby residents.”

Initial reports by the Ministry of Energy and Mines Responsible for Core Review have found that the mine is set to blast into rock containing arsenic, lead, aluminum, chromium, uranium, manganese, and strontium.

According to the Airshed Plan 2012, The City of Kamloops said, “there is no safe level of particulate matter.” However, the arid windy Okanagan climate may make dust containing these known carcinogens impossible to avoid.

Kamloops is in a valley susceptible to inversion, which can block the vertical movement of air, making particulate matter and diesel emissions a dangerous threat to local air quality.[view:in_this_series=block_1]

When asked if the Okanagan climate would be taken into consideration in their environmental assessments, KGHM told DeSmog that "[t]he consultants studying dustfall and air quality will use a complex computer model to predict the effects of mine operations. The model incorporates scores of input and factors three years of local weather data. Results are not yet complete. The studies are underway."

Kerr says that KAPA and the KCC have asked for more extensive environmental assessments from the provincial and federal governments but so far they’ve received only evasive, uninformative replies.

KGHM told DeSmog: "all the studies are being conducted by independent engineering consultants. Many of the studies will also be peer-reviewed. The final say on the adequacy of the studies rests with the provincial and federal governments, either of which could seek more information or question the work done."

KGHM expects to submit their application for an environmental permit by early 2015.

Until then, Tony Brumell will be offering his time to give tours of Jacko Lake, Inks Lake and Sugarloaf Mountain, always keeping a look out for the rare burrowing owl. There's no better way to learn exactly what's at stake.

*images used with permission of KAPA and wiki.

Elizabeth Hand
Elizabeth Hand is a novelist and educator in the fields of writing and science. She holds an MFA in Creative Writing from the Univ...

After years of resistance, Coastal GasLink starts to drill under Wet’suwet’en river

This story was originally published by Ricochet. The mountain woodland shimmers green with hints of rust-coloured Fall descending to envelop it in silent foliage. The...

There’s a map for that conflict

To help readers better see the complexities of the Coastal GasLink pipeline running through Wet’suwet’en...

Can Patagonia really put the climate over profits?