Ontario Could Save Billions By Buying Quebec’s Hydro Power

Ontario could avoid refurbishing aging nuclear stations and save over $1 billion annually on electricity bills if the province imported water power from Quebec, says the Ontario Clean Air Alliance, a coalition of 90 organizations that promote renewable energy.

“This one is really a no-brainer,” Jack Gibbons, chair of the alliance, told DeSmog Canada. The alliance was largely responsible for Ontario agreeing to phase out all coal-fire power plants by December 31, 2014.

Quebec is the fourth largest producer of hydroelectricity in the world (behind China, Brazil and the U.S.) and has a large hydro surplus the province usually sells to the U.S. Existing power lines between Ontario and Quebec can transport nearly as much power as Ontario’s Darlington nuclear station produces. This amounts to more than 10 per cent of Ontario’s peak demand on a hot summer’s day.

“Importing hydro from Quebec is technically feasible. The only barrier is lack of political will,” Mark Winfield, associate professor of environmental studies at York University, says.

Successive Ontario governments have insisted on the province producing all of its own electricity despite the fact it sits between two provinces with massive hydroelectric generating capacities — Quebec and Manitoba. Transmission lines from Ontario to both of these provinces have existed for decades. Ontario-based water and nuclear power provide the province with most of its electricity. 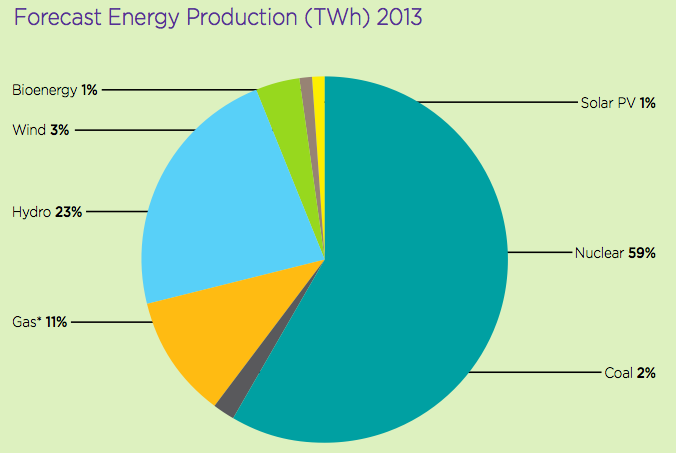 “Ontario imports natural gas from outside the province, and uranium for its nuclear plants from Saskatchewan, and used to buy its coal from the American Midwest,” Winfield told DeSmog Canada.

“Why would importing electricity from Quebec be any different?” he says.

Importing water power is mentioned in the province’s energy plan as a possibility if the price is right:

“Ontario will consider opportunities for clean imports [i.e. renewable energy such as water power] from other jurisdictions when such imports would have system benefits and are cost effective for Ontario ratepayers.” 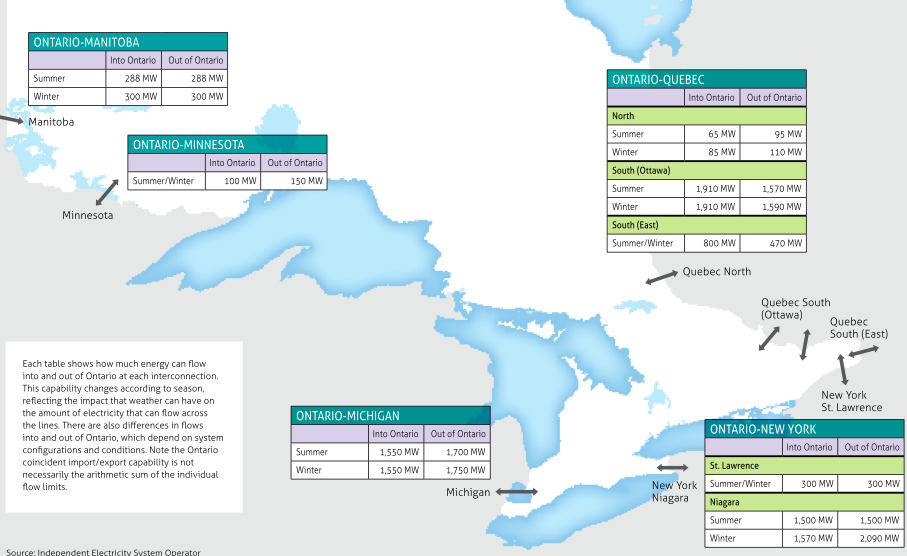 The Ontario Clean Air Alliance estimates the savings for Ontario will be at least $1.2 billion annually between 2020 and 2050 if the province cancels the refurbishment of Darlington’s nuclear reactors and signs a long-term power contract with Quebec instead. The cost of the refurbishment will be 8.6 cents per kilowatt-hour (kWh) according to Darlington’s operator, Ontario Power Generation. Quebec exports power at 4.1 cents/kWh on average.

The savings could be even more.

“Nuclear projects in Ontario usually run 2.5 times over budget. We are concerned that the actual cost of the Darlington re-build will be between 19-37 cents/kWh,” Gibbons told DeSmog Canada.

“As we see it, energy conservation and importing hydro from Quebec is the only way Ontario can reduce electricity bills for consumers,” Gibbons says.

Quebec stands to benefit from a power contract with Ontario as well since the U.S. export market is collapsing. The U.S. shale gas boom has dropped the price of natural gas so low that American states are burning more gas for their power than before, creating less economic incentive to buy electricity from Quebec.

Ontario could reap further economic benefits beyond being a consumer of Quebec’s cheap hydro. Winfield points out that Quebec’s electrical demand is the highest in winter when Ontario's demand is low and wind power is at its strongest. Ontario could sell its power back to Quebec as part of the deal.

Cheaper electricity rates could provide some relief for Ontario's declining manufacturing industry by reducing the cost of doing business and making manufacturers in Ontario more competitive.

“Although there would be some job loss in Ontario’s power generating sector, there would be a net-gain for the province’s economy,” Gibbons says. OCAA is currently circulating a petition demanding Ontario sign a long-term electricity supply contract with Quebec.