By Julien Gignac (Local Journalism Initiative reporter)
Share
Polar bears on the west coast of Hudson Bay wait for the sea ice to freeze up so they can hunt for seals. Photo: BJ Kirschhoffer / Polar Bears International

The hundreds of polar bears that gather each year on the west coast of Hudson Bay for a seal hunt may be in for a long, hungry wait.

This year is on track to be the worst on record for the formation of Arctic sea ice, which the bears rely on for the hunt, according to Alysa McCall, director of conservation outreach and a staff scientist at Polar Bears International.

“Right now, we’d expect a certain area of the High Arctic to be covered with sea ice,” but it remains open water, she said. Satellite imagery shows there is still a lot of open water in the Arctic. 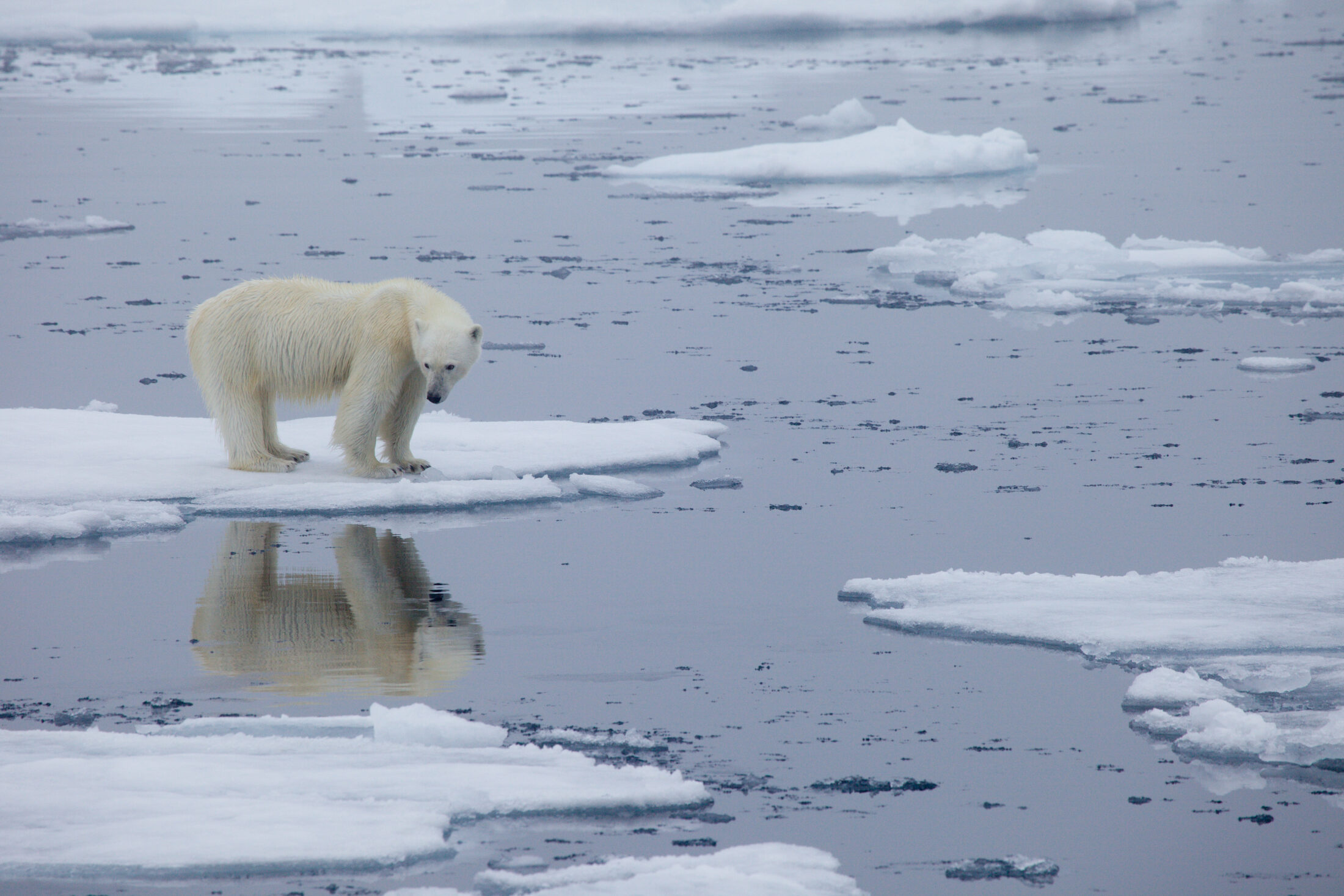 No ice, no food. A delay in the freeze of Arctic water makes it more difficult for polar bears to hunt seals, a necessary source of fat. Photo: KT Miller / Polar Bears International

Polar Bears International, a conservation organization that focuses on wild polar bears and their habitats, is celebrating Polar Bear Week from Nov. 1 to 7. The organization uses live webcams and on-the-ground scientists to raise public awareness of the bears, which are particularly calm and playful during their wait.

“It’s actually been some of the best polar bear action I’ve ever seen. I’ve been glued to the cams,” McCall said.

But the absence of sea ice this year emphasizes the extent to which polar bears are vulnerable to the climate emergency.

“They are experiencing some of the very first impacts of climate change,” McCall told The Narwhal. 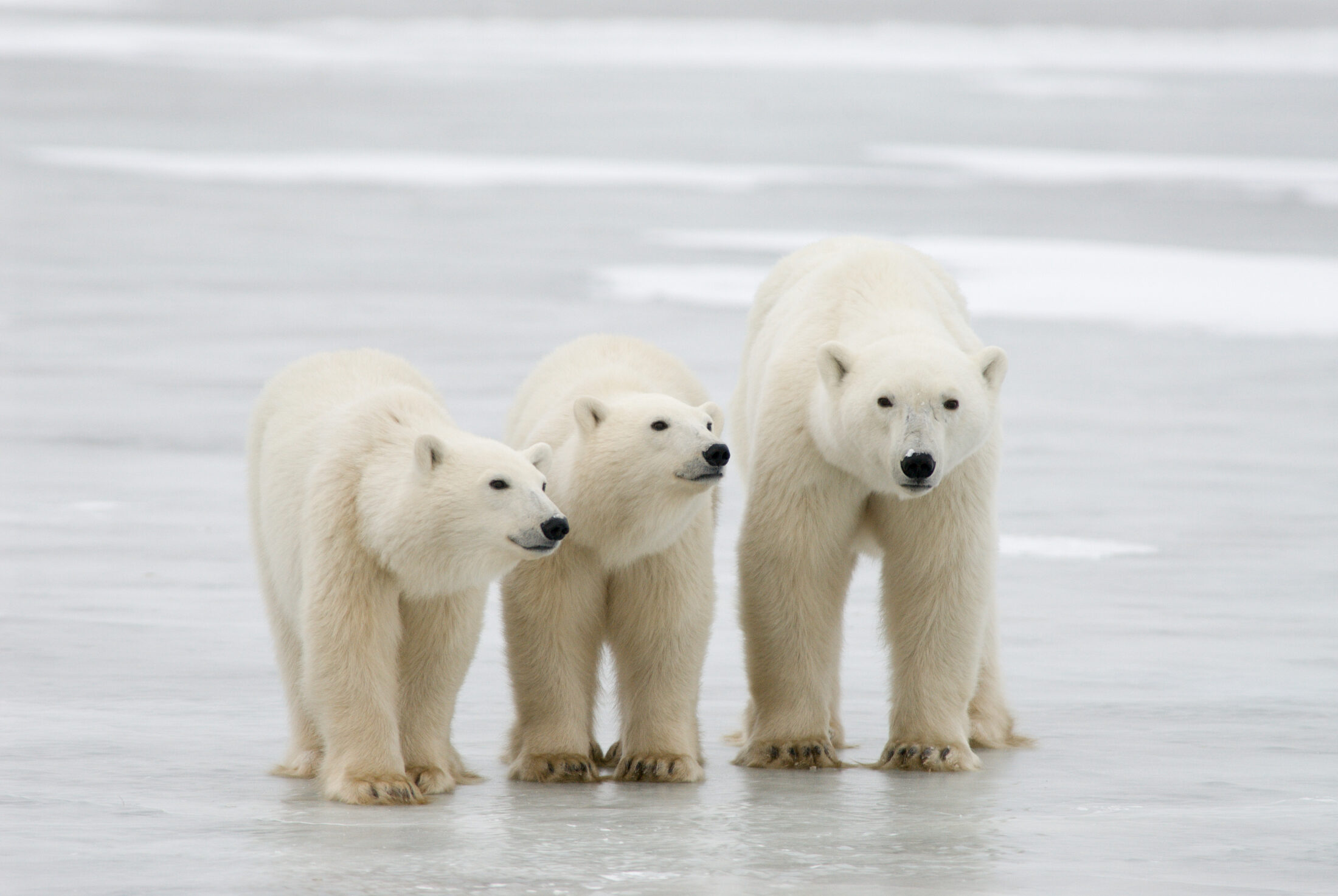 Polar bear, including this mother and her cubs near Churchill, Man., are on the frontlines on the climate crisis. Photo: BJ Kirschhoffer / Polar Bears International

Climate change is having ‘concrete impacts’ on polar bears

Arctic sea ice ebbs and flows seasonally and is usually at its lowest in September. From September to March, the amount of sea ice in the Arctic can double or triple.

But due to the climate emergency, warmer temperatures have meant dramatic changes to seasonal ice fluctuations, including when ice shows up, how much of it shows up and how long it hangs around for.

This is particularly true for the Arctic, where surface air temperatures have increased at twice the rate of the global average, a phenomena known as Arctic amplification. 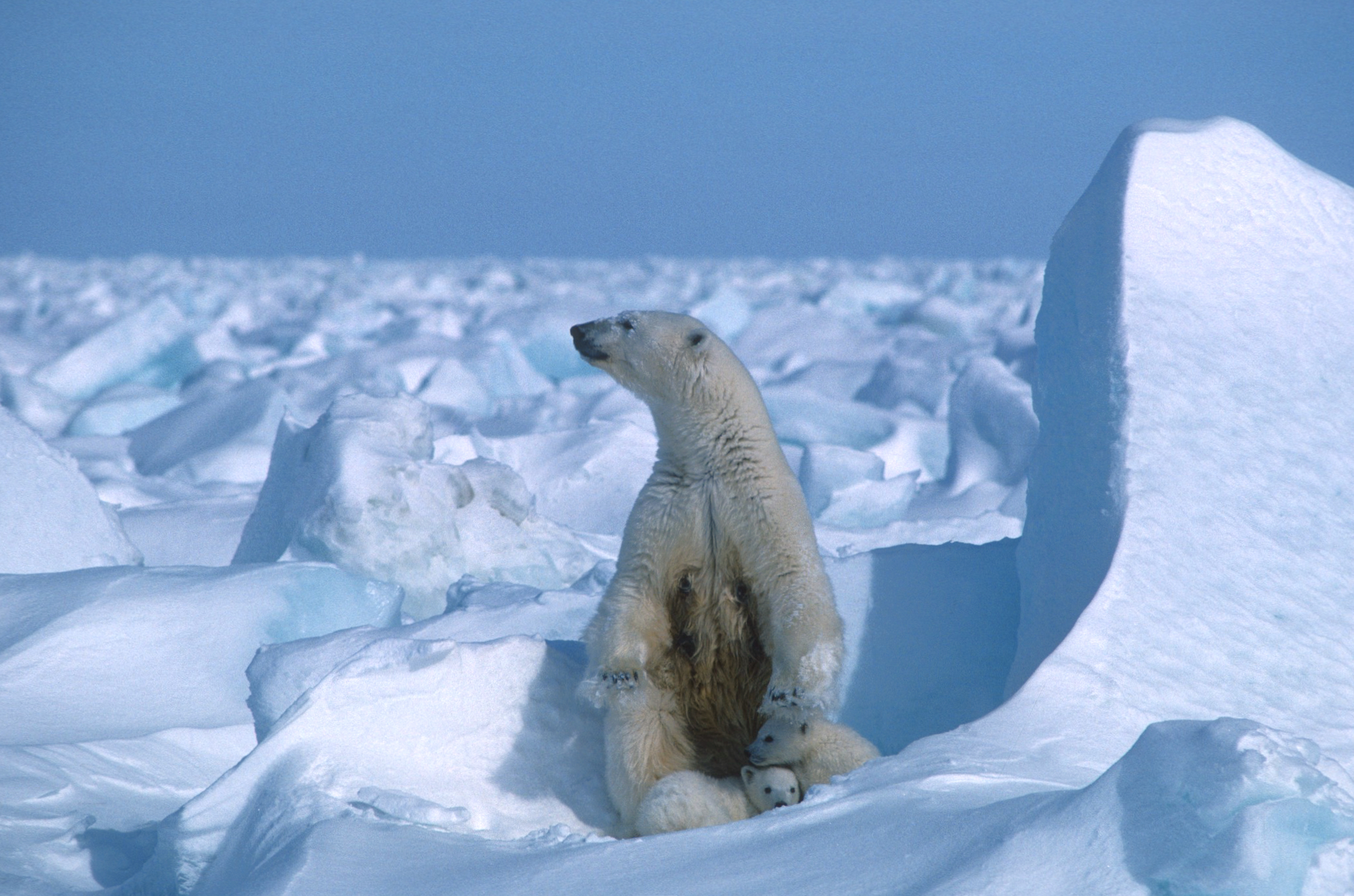 Polar bears near Hudson Bay can end up chilling on land for four weeks longer today than they did in the 1980s. Photo: Steven C Amstrup / Polar Bears International

For the polar bears lounging near Hudson Bay, that means ice is appearing at later dates in the year, according to McCall. She said the late ice can mean polar bears end up hanging around for four weeks longer on land compared to the 1980s.

“What that means for polar bears is a longer wait to get food,” McCall said, noting that while on land the bears might forage for kelp, eggs, berries and the occasional vole but they won’t find the kind of fat they require and usually get from seal blubber. “Sea ice equals seals, which equals calories, which equals happy bears.”

The loss of sea ice is also having measurable impacts on the region’s polar bear population. In the 1980s, there were about 1,200 individuals in the population and now there are about 800, representing a 30 per cent decline. Fewer cubs are surviving into adulthood and individuals are getting smaller in stature in the western Hudson Bay population, McCall said. 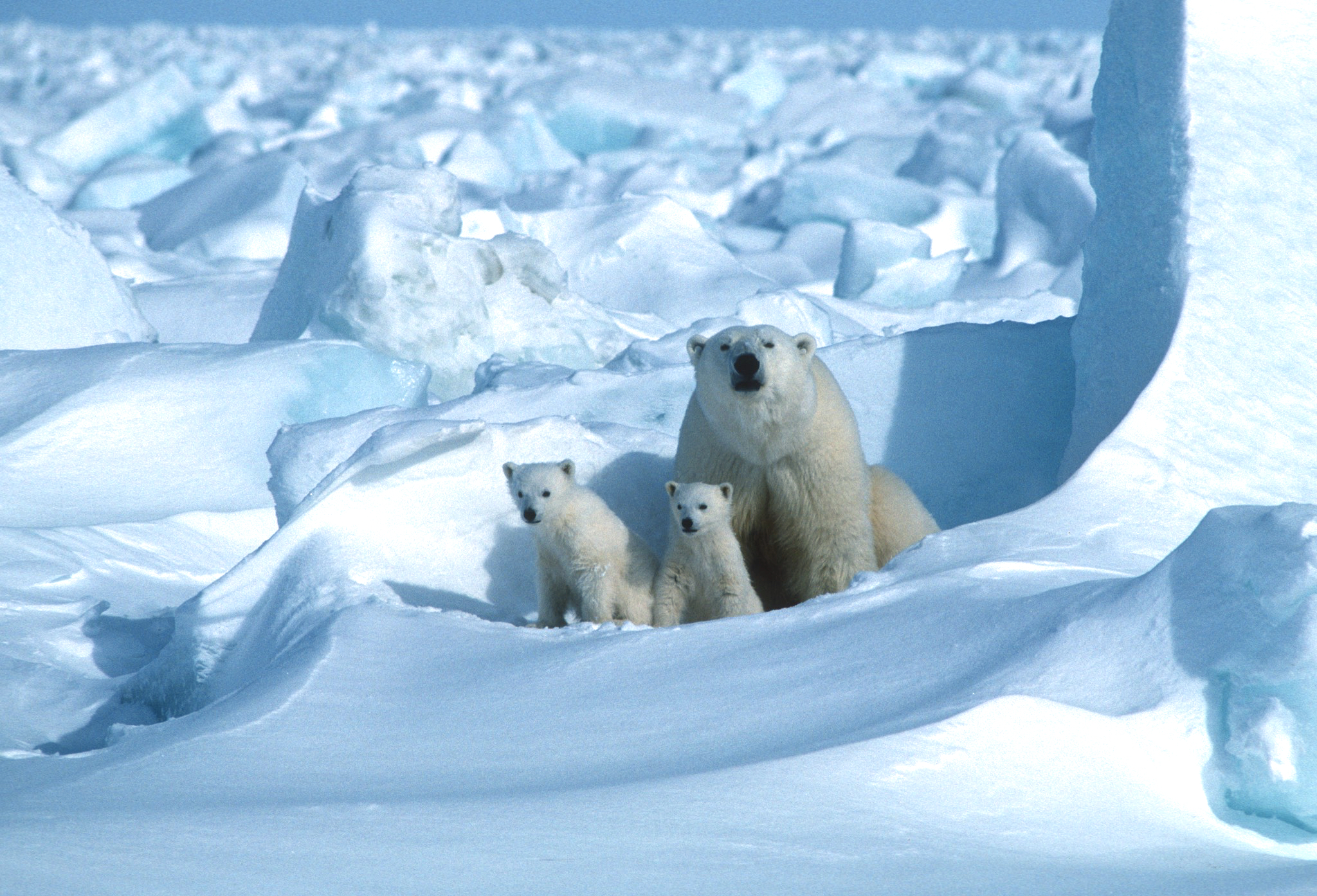 Fewer cubs in the western Hudson Bay population are surviving into adulthood and individuals are getting smaller in stature. Photo: Steven C Amstrup / Polar Bears International

As greenhouse gas emissions increase, the results are expected to be dire for polar bears across the planet. A recent study published in the journal Nature Climate Change estimates most populations could disappear by 2100 if the globe continues to warm at its current rate. The researchers determined that a moderate drop in emissions would be unlikely to prevent the local extinction of some polar bear subpopulations.

McCall said the Hudson Bay polar bears, which are near Churchill, Man., could experience reproductive failure as soon as 2080 without significant climate action.

“If we want to have healthy polar bears throughout the Arctic, we really need to act now to protect the Arctic, which comes down to fossil fuel emissions,” she said.

“If we can switch to more renewable energy, we’ll be doing a favour for the bears and ourselves. This is not an individual problem. This will only be solved by community action. It’s about pushing leaders to get some policy changes to change the system that we’re living in to get our climate back to functioning the way it should.” 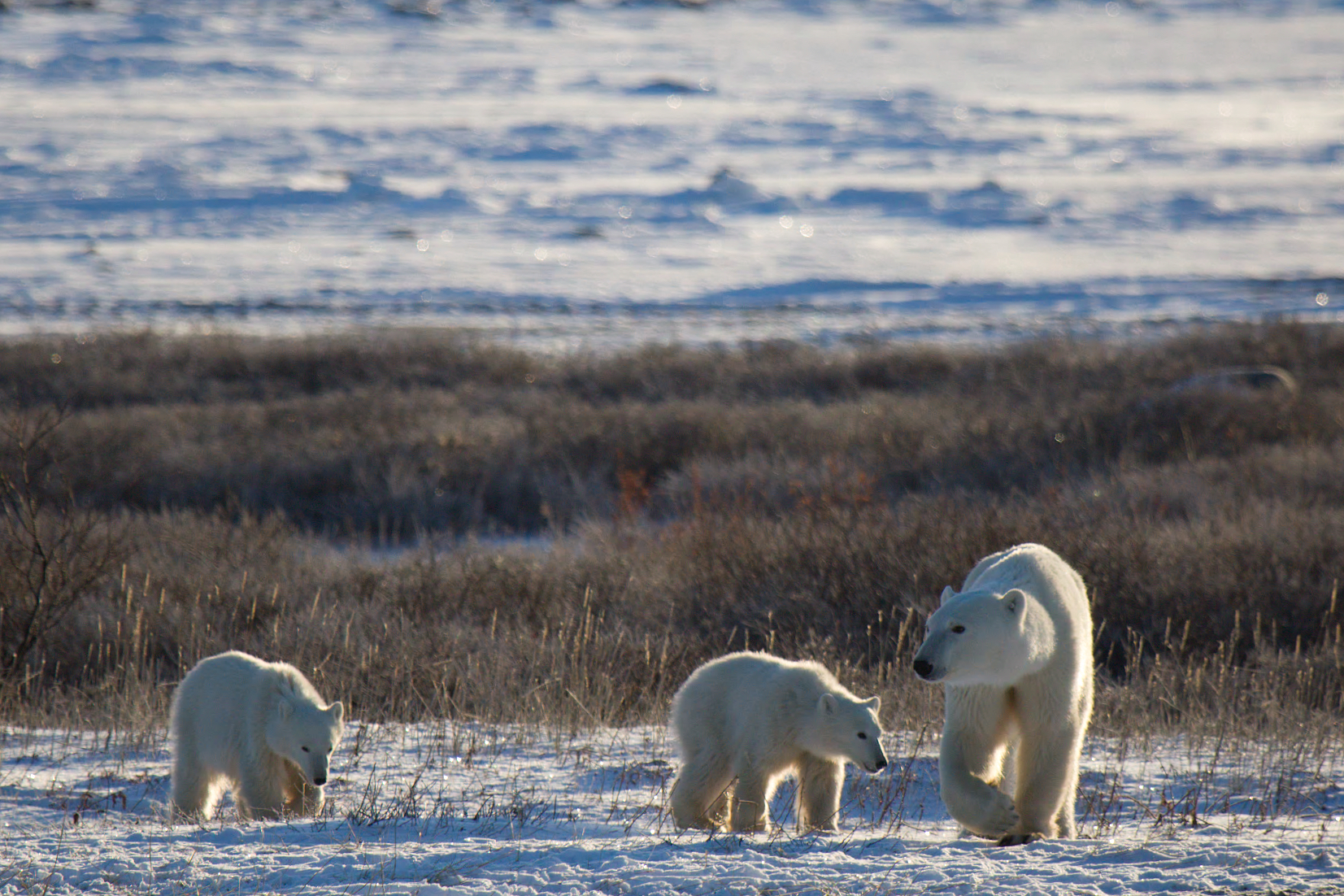 The number of polar bears on the west coast of Hudson Bay has dropped from about 1,200 individuals in the 1980s to about 800 today. Photo: KT Miller / Polar Bears International

Gunter supplied his tundra buggy, usually reserved for seasonal tourists now absent due to the pandemic, to the scientists with Polar Bears International.

“We realize that not everyone is going to have that personal, life-changing experiencing locking their gaze with a wild polar bear, and what the polar bear cam helps us do is share these bears, for free, with people from all over the world,” he said. “Hopefully through the cam we can inspire people to become more engaged in their communities and in the environment.” 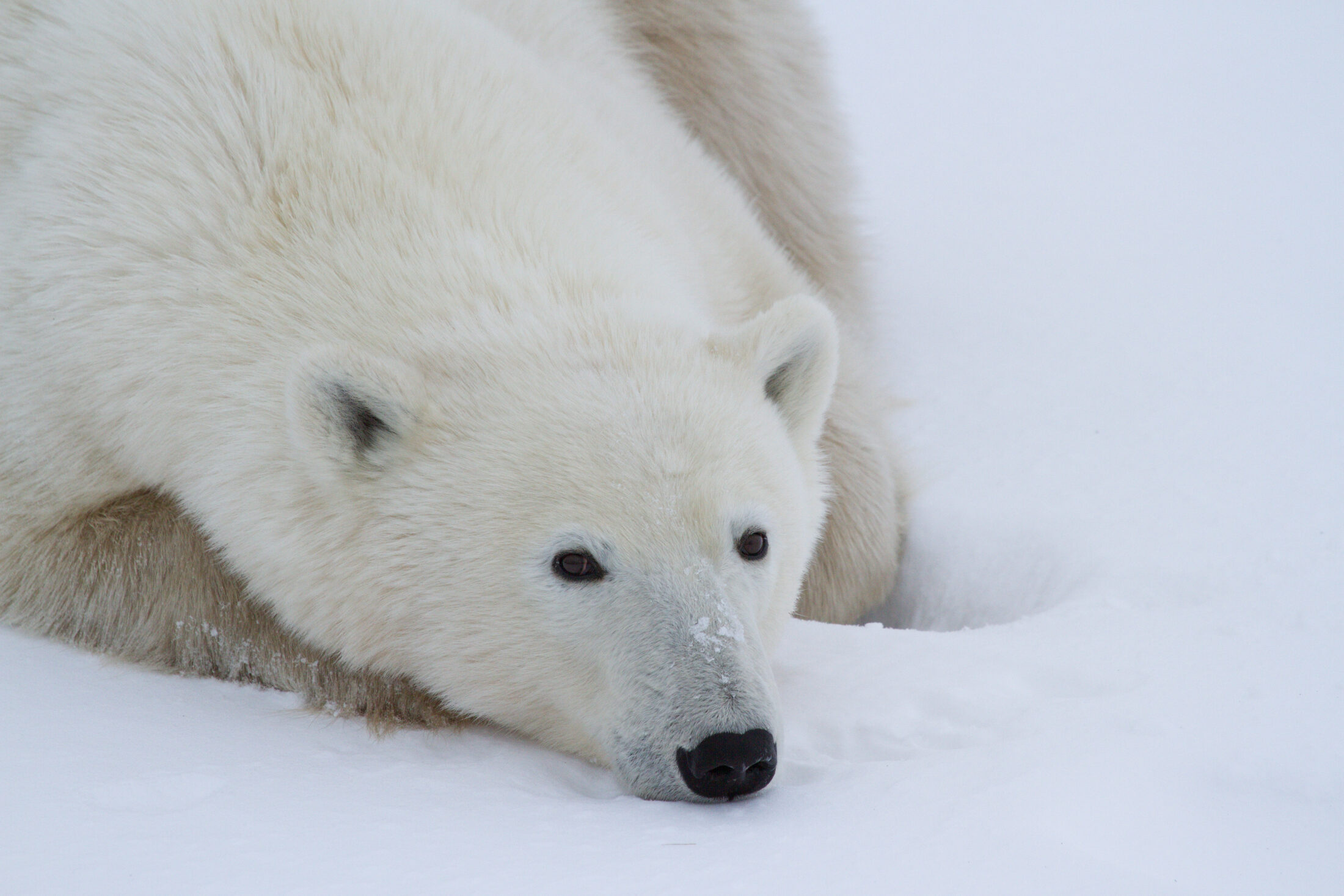 Gunter said he is personally observing what the science is saying — Arctic freeze-up is happening later and polar bears are getting smaller in size.

“It’s likely that these bears aren’t going to be here in a few decades,” he said. “That’s grim.”

That positions Polar Bear Week as but another important means to send a crystal-clear message that climate change is here and will worsen if nothing is done to reverse its course.

“We’ve got to acknowledge that that’s the case and deal with the implications,” Gunter said. “I don’t think we lose anything by better conserving our resources and being better stewards of our lands.”

Banner: Polar bears on the west coast of Hudson Bay wait for the sea ice to freeze up so they can hunt for seals. Photo: BJ Kirschhoffer / Polar Bears International