Share
A view of Parksville, Qualicum Beach. A local conservation group is raising awareness about the development of a wetland in Qualicum Beach that appears to be going ahead without adequate permits. An estimated 80 per cent of wetlands in B.C. have been destroyed or altered in developed areas. Photo: Rebecca Bollwitt / Flickr
News

‘We’re going to have no protected land at all’: locals fight wetland development on Vancouver Island

A conservation group in the town of Qualicum Beach says the local municipality circumvented its own bylaws when it permitted a housing development in a sensitive wetland without necessary authorizations
Stephanie Wood
Apr 29, 2020
10 min read

A quiet wetland home to waterfowl and amphibians is at the centre of a clash between a conservation group and the local leadership of Qualicum Beach on the east coast of Vancouver Island.

The green space in the corner of town, called the Laburnum wetland, is favoured by locals for recreation with walking trails a short distance from the sandy beaches of Parksville.

So when the local government decided to approve a 4-hectare housing project on the wetland, it spurred disagreement over what development and environmental protections in the region should look like. Wetlands are recognized by the federal government as sensitive ecosystems.

Development plans entail the parcelling of two lots for an “exclusive newly created two-lot subdivision” called Seacroft Estates, according to the website of Ballard Fine Homes. The company has already begun clearing trees in the area.

The first lot is listed on their website for $648,000 and a description states the property “gives you the feeling of living in the countryside while living so close to the beach.” The second lot is advertised as “boast[ing] a 2800 sq ft sprawling custom Ballard Fine Home executive rancher” with “exquisite finishing” and is listed for almost $1.6 million.

Ezra Morse, director of communications for the Qualicum Nature Preservation Society, said he is trying to get answers from the municipality as to why it approved the project when the town’s bylaws state the area requires permits that haven’t been granted.

Morse believes Qualicum Beach is circumventing its own rules to allow the homes to be built.

The battle is not just about this one development, Morse said, but about the potential for future encroachment on sensitive ecosystems — even when there are protections in place.

“We have a microcosm here, a small picture of what might be happening in a lot of B.C. right now,” Morse said.

Ducks Unlimited Canada, a non-profit organization dedicated to conserving wetlands, estimates that 80 per cent of wetlands in B.C. have been destroyed or altered in developed areas. 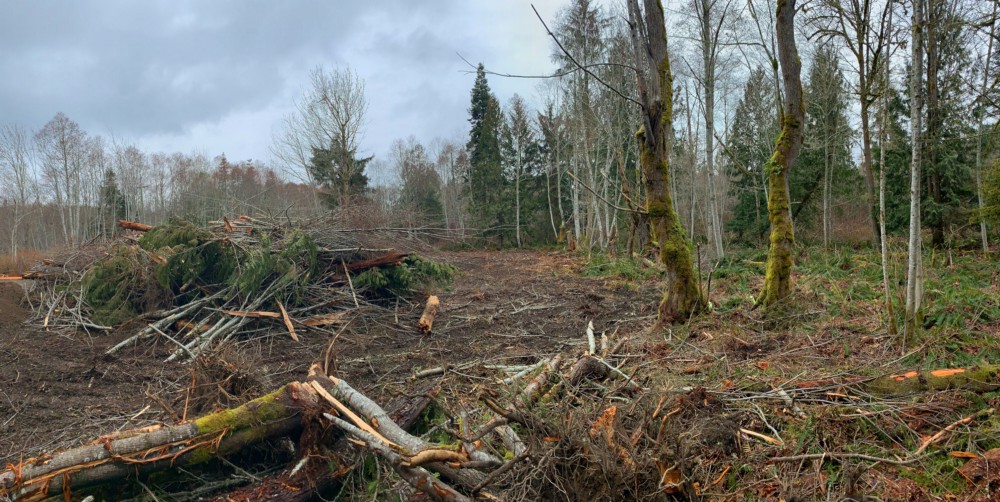 Trees have been cleared in the Laburnm wetland for the development project. Photo: Qualicum Beach Preservation Society

The Qualicum Nature Preservation Society launched a petition calling on the town to halt the development until more information is provided to the public on how the housing project was approved.

“Today, we are trading our vision of sustainability and everyone’s clean air for a few private ~2700 SQFT McMansions during a housing crisis; a sensitive ecosystem torn apart to be replaced by soggy lawns and amenities,” the petition reads.

The society had collected over 3,600 signatures at publication time.

“It is most disappointing to see that there remains a small group of people who actively foster dissidence at a time when our community needs to pull together,” he said in the statement published on April 6.

The statement also claimed the area doesn’t require any special permits. Wiese did not respond to requests for comment.

But under the city’s official community plan, the wetland is classified as a hazardous area and an aquatic greenway. According to Qualicum Beach bylaws both are considered areas that require special permits for development and in some cases call for supporting documentation before work can commence.

If the terms of those permits are not met, the town’s bylaw enforcement officer can issue a stop work order. Some of these terms include minimizing the area of encroachment and requiring construction to include measures to preserve, protect, restore or enhance habitat.

A map of Seacroft Estates, showing the location of the housing development within the wetland area. Photo: Ballard Fine Homes / Facebook

The bylaw states the only activities that can take place in the area without a permit are necessary procedures like mitigating flooding or erosion, cutting down hazardous trees or constructing trails.

Qualicum Beach commissioned two reports — one environmental and one geotechnical — that “satisfied” the town’s director of planning, Luke Sales, according to an email from Sales to Morse that was reviewed by The Narwhal.

The environmental report, produced by contractor Toth and Associates Environmental Services, stated Qualicum Beach did not request a permit application for the development “and therefore we will not provide a discussion of ecological greenway [development permit area] guidelines.”

Morse said he was having trouble communicating with Sales until the preservation society retained lawyer Erin Gray, an associate with Arbutus Law.

According to Gray, Sales indicated he would take the issue to Ballard Fine Homes.

Sales declined an interview request but provided an emailed response.

“Currently the town is addressing those concerns directly with the property owner to ensure that applicable requirements are all being met,” Sales wrote. “I don’t have anything further to report at this time.”

Morse said he wants to prevent the town from creating a precedent for jumping over permits and developing on wetlands or else sensitive areas will be infringed upon until “we’re going to have no protected land at all.”

In a Facebook post, Ballard Fine Homes said the two houses will be “outside any environmentally sensitive or restricted areas.”

“Less than one acre of this site will be cleared for the two home sites leaving the remaining nine plus acres fully treed with protective covenants in place,” reads the post.

The company’s owner, Don Ballard, told The Narwhal he is very disappointed with the situation as has met all of of the town’s demands. He said the town put him through a “relentless” process to meet environmental requirements, but that he was not told about the ecological greenway development permit area until recently.

The project has not received a building permit, he said, but did  obtain permission from Qualicum Beach to begin clearing trees and installing service infrastructure.

“I’ve done nothing wrong. I’ve just followed what was asked of me,” he said, adding he is willing to sell the land back the town or to anyone else who may want to purchase it and make it a park.

“I’m open to working with the community in whatever way,” he added. “But I certainly am not in a position where I can just donate the land as an act of goodwill.”

The town issued Ballard Fine Homes a stop work order due to the preservation society’s legal challenge. Ballard said that, as a way of seeking a solution, he has come up with a compromise: if Qualicum Beach lets him build five smaller homes (taking up approximately the same area as the two larger homes) elsewhere, he will donate the remaining wetland back to the town.

He said he has yet to hear back from the town about his offer.

A newt takes a stroll out of a forested area just west of the Laburnm wetland. Photo: Qualicum Beach Preservation Society

Wetlands can help ‘weather the storm’ of climate change

Wetlands play an important role in flood mitigation. They also act as carbon sinks and absorb pollutant runoff from agricultural fields. They store water in the wet months and slowly release water in hot summer months.

Neil Fletcher, manager of conservation stewardship for the BC Wildlife Federation, said wetlands can “help us weather the storm” of climate change by mitigating floods, wildfires and droughts.

The Auditor General of British Columbia identified flood, wildfire and drought as “key climate-related risk areas” in a 2018 audit on climate change threats in the province.

Fletcher said he regularly gets calls from people concerned about housing developments happening in local wetlands. Not only do they damage habitat, they also pose safety risks to future homeowners and tenants since these homes are often built on floodplains, he said.

Often, these calls are “coming too late,” Fletcher said. “The agreements have been put in place, the money’s been spent by the proponent, and massive lawsuits would probably entail their council, and really the rules are often not strong enough in these communities to be able to say no.”

Morse said he was told the Ballard Fine Homes development was given a “verbal” exemption. Morse’s lawyer, Gray, confirmed she was told the same thing.

“Any steps that are taken that would irrevocably change an ecologically important area must be taken in a transparent manner. In this case, a verbal exemption is insufficient,” Gray told The Narwhal.

Development permit areas are commonly used as a means to protect wetlands, but Fletcher said they “are not the strongest piece of legislation.” He added municipalities can be reluctant to make their requirements too strong in case it deters development.

According to a report by the David Suzuki Foundation, which looked at the economic value of natural capital, wetlands range in value from $5,236 to $26,653 per hectare per year by acting as a clean water supply to streams, rivers and lakes.

‘Don’t underestimate the power of your voice’

When he felt like he was getting nowhere, Morse approached West Coast Environmental Law, which provides an environmental dispute resolution fund for legal aid. His application was approved, and the firm connected him with Gray.

The resolution fund’s project manager, Barbara Everdene, said part of the reason they selected Morse’s case was because it’s a “common problem” and active citizens seeking details about development projects “are often just not given information.”

“They have been trying for months just to have some basic answers from the town of Qualicum Beach about what is actually happening,” she said.

Morse has filed a freedom of information request to obtain applications, permits or reports pertaining to the development.

Fletcher doesn’t think initiatives to improve wetland protection are going to come from the federal or provincial government. He believes changes will come from grassroots organizations and citizens pushing their local governments.

“Society has a role to play. Wildlife doesn’t have a voice. Even though 600 species benefit from wetland, it’s only people who can vocalize it at city hall,” he said. “Don’t underestimate the power of your voice in changing things around.”

A view of Parksville, Qualicum Beach. A local conservation group is raising awareness about the development of a wetland in Qualicum Beach that appears to be going ahead without adequate permits. An estimated 80 per cent of wetlands in B.C. have been destroyed or altered in developed areas. Photo: Rebecca Bollwitt / Flickr
Published By

Steph Kwetásel'wet Wood is a Sḵwx̱wú7mesh journalist living and writing in North Vancouver. She writes stories about Indigenous rights, the…

Amid legal hurdles in the U.S. and continued opposition from First Nations, the federal government...

The clean energy bill that divided B.C.’s NDP and Greens: 11 things you need to know

Proposed legislation would end B.C.’s mandate to be electricity “self-sufficient,” and the Greens say that’s...