The solar industry was responsible for creating one out of every 50 new jobs in the U.S. last year and the country’s fastest-growing occupation is wind turbine technician — so no matter one’s feelings on climate change, the renewable energy train has left the station, according to a new report.

“It’s at the point of great return. It’s irreversible. There is no stopping this train,” said Merran Smith, author of Tracking the Energy Revolution 2017 by Clean Energy Canada. “Even Donald Trump can’t kill it.”

More than 260,000 Americans are now employed in the solar industry, more than double 2010 figures. Meantime, the top five wind-energy producing congressional districts are represented by Republicans.

Since 2012, the world has brought more power online from renewables than fossil fuels each year — and that trend continued in 2016. 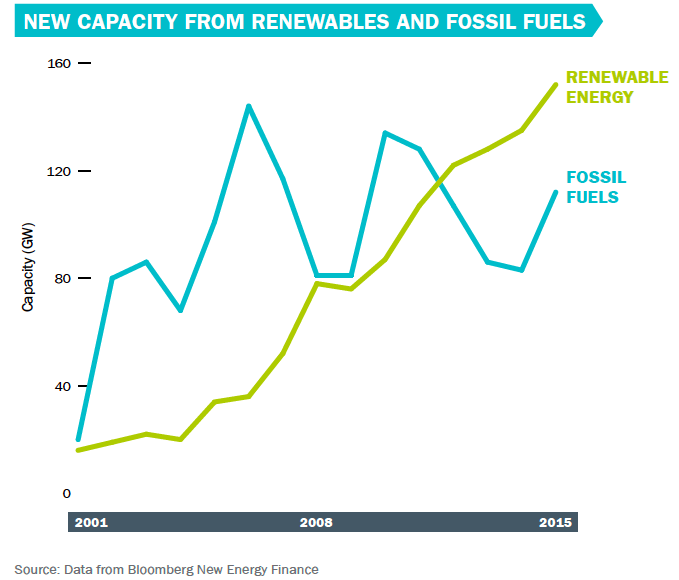 “Global trends show some renewable energy technologies have reached 'grid parity' with fossil fuels—thanks to falling technology costs—meaning no financial support is required to make their cost equal to, or cheaper than, their fossil fuel competitors,” reads the report.

The European Union led the pack, with 86 per cent of its new electricity capacity coming from renewable sources in 2016. 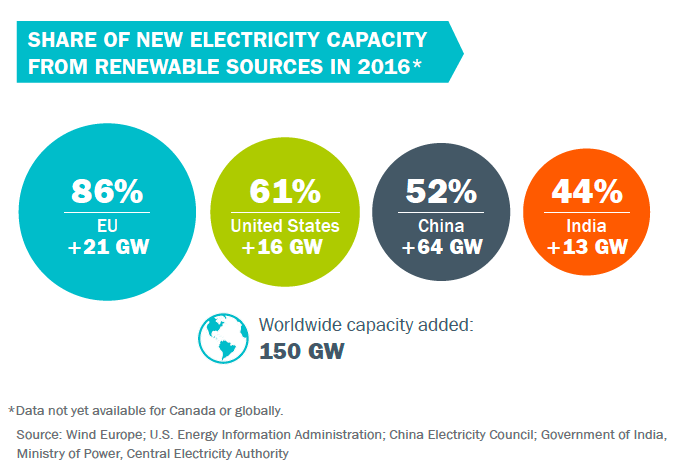 In 2016, China added 30 GW of new solar capacity — or roughly enough solar panels to cover three soccer fields every hour, according to the report.

By 2015, renewable electricity employment is estimated to have grown to 6.7 million direct and indirect jobs globally, with solar PV the leading technology, employing nearly 2.8 million people. It is estimated that in 2015 Canada was home to 10,500 jobs in wind and 8,100 in solar PV. 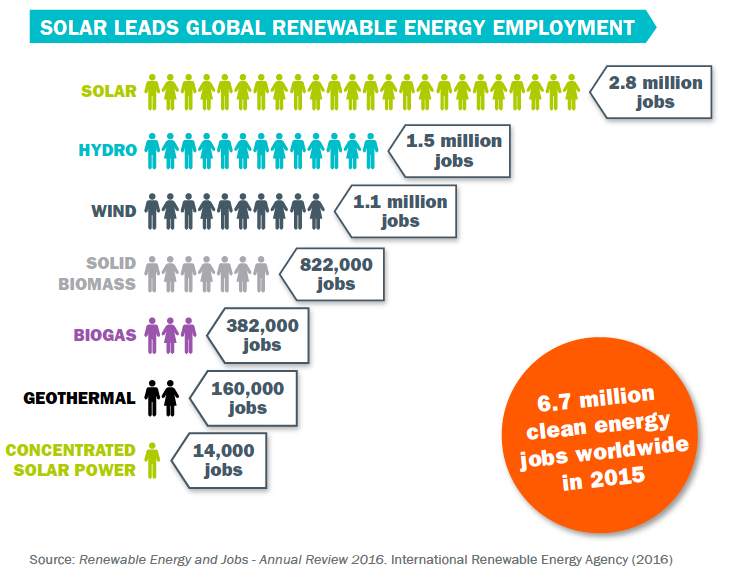 The cost of renewables is expected to continue to come down, leading to further job creation. Between 2015 and 2025, the International Renewable Energy Agency projects generation costs for onshore wind to fall another 26 per cent, while offshore wind generation costs fall 35 per cent and utility-scale solar PV costs drop 57 per cent. 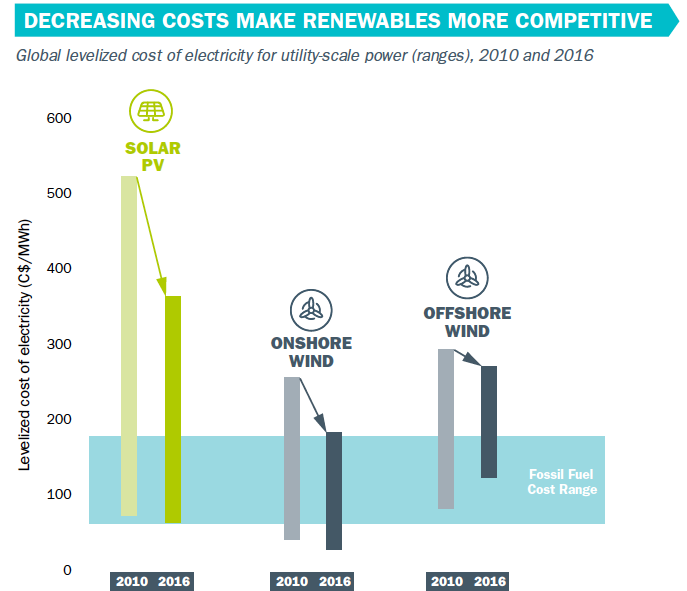 “Both countries are now focused on ‘digesting’ the vast amounts of new renewable energy capacity added in recent years,” the report said.

Meantime in Canada, investment in renewables is down for the second year in a row, dropping Canada to 11th place globally.

“But context matters,” the report reads. “Relative to the top five countries leading the world in renewable energy investment and deployment, Canada already has a remarkably clean grid — deriving more than 80 per cent of its power from emissions-free sources and nearly two-thirds from renewable energy. That fact, coupled with relatively stable demand for electricity, limits the need or opportunity for new investment and deployment.”

For Canada, the opportunity lies in getting Alberta and Saskatchewan off coal, as well as exporting Canadian technology around the world.

“One of the biggest opportunities for Canada is this growing global demand in places like India and China for clean energy technologies and services,” Smith said.

For instance, India has a goal to add 175 gigawatts of renewable electricity in the next five years — more than the entire Canadian electrical system.

“They can’t do it alone,” Smith said. “That’s the opportunity for Canada. It’s taking our knowledge and expertise and services and selling them to the world.”

“In the past there’s been a lot of focus on marketing our oil and gas internationally. Now there’s real money to help these companies export their products to the world,” Smith said.

“As the U.S. government retreats from international climate diplomacy, clean energy innovation and free trade, it leaves a gap that Canada is well-positioned to fill. And it’s clear that if we don’t step up, somebody else will.”

Our young Narwhal fans blew us away with their drawings of the famed unicorn of...

As rumours swirl of a snap fall election, the NDP government has announced development deferrals...