Will Alberta’s renewable energy sector go the way of Ontario’s?

Renewables are the lowest cost option for electricity in Alberta but, with Jason Kenney facing off against Rachel Notley for the premier’s seat this spring, the burgeoning industry is facing headwinds
Sarah Lawrynuik
Feb 25, 2019
5 min read

The leader of Alberta’s United Conservative Party, Jason Kenney, has vowed that no government money will go to support the province’s renewable energy industry if he is elected when voters go to the polls this spring.

“Part of the Alberta advantage must be competitive and affordable power prices. We will not replicate the disaster of Ontario Liberal power policies that the NDP is trying to copy in Alberta,” he told reporters last week.

Kenney’s comments raise two questions: would he keep contracts already signed by Rachel Notley’s NDP government? And does Kenney recognize that renewable energy contracts look much different in Alberta than they did in Ontario?

The difference between Ontario and Alberta

“The mechanism that was used in Ontario was probably not ideal,” said Andrew Leach, University of Alberta associate professor of environmental and energy economics.

Leach chaired Alberta’s climate leadership panel, which proposed policies to the NDP government when it came to power four years ago. The renewables industry subsequently became a vital part of the plan to phase out coal power by 2030.

“One of the things that changed in Alberta was going to competitive procurement. So let the market compete for who can do it most cheaply,” Leach told The Narwhal.

So far, under this model, Alberta has given the green light to 1.3 gigawatts worth of wind power.

Capital Power, an Edmonton-based company, recently won a contract for the first phase of the Whitla wind project near Medicine Hat, Alta., with a bid of 3.9 cents per kilowatt-hour.

The average pool price of electricity last year in Alberta was 5 cents per kWh. If electricity prices rise, the renewable energy generator rebates the excess to the government. If the pool price is lower than the guaranteed bid amount, the province tops up the company’s return, as per the diagram below. 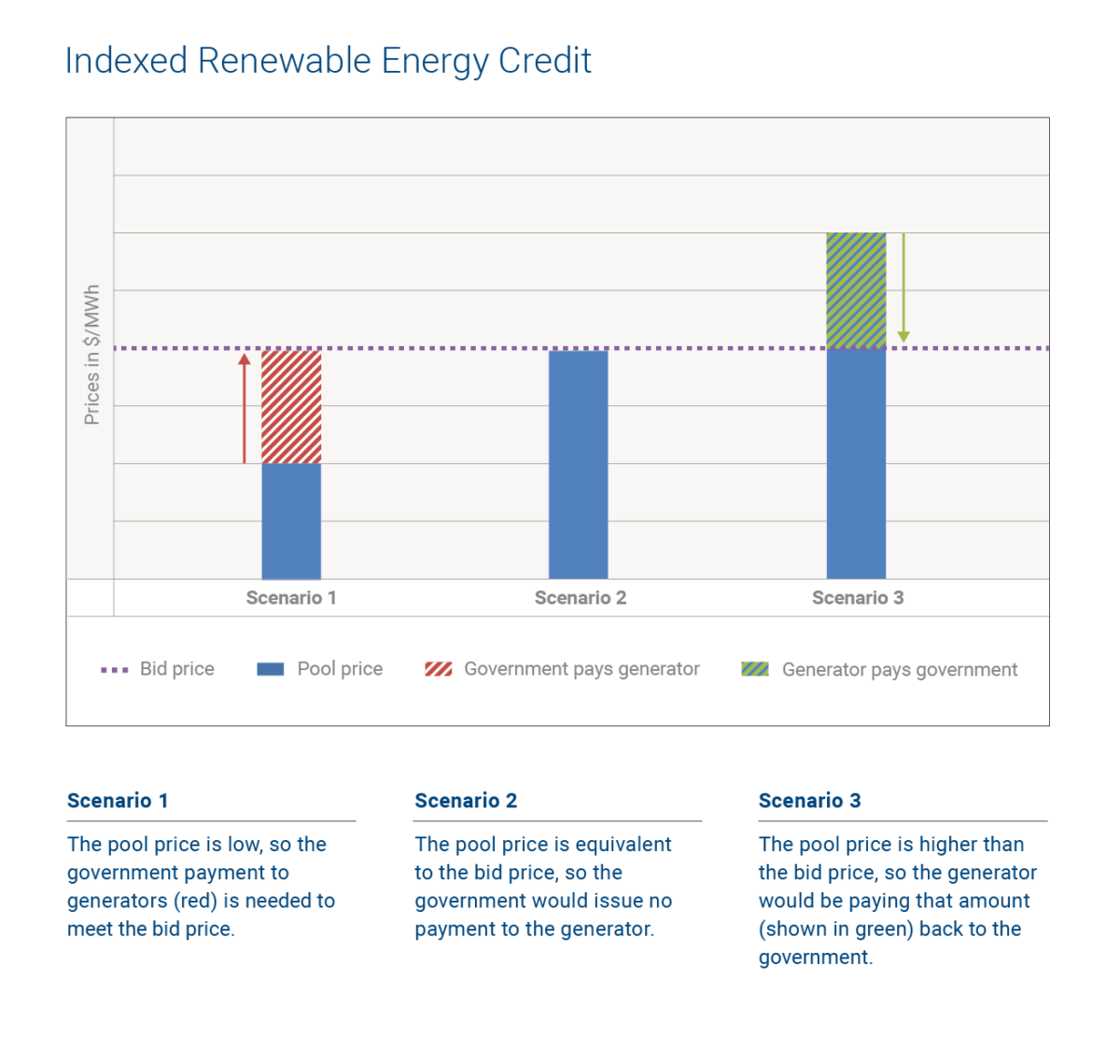 Recent advancements in technology have seen global renewable energy costs plummet, and Alberta is no exception. Last week, the province’s NDP government announced it was signing a 20-year contract with Ontario-based Canadian Solar Solutions Inc. to bring 100 megwatts of power online in southern Alberta, at a cost of 4.8 cents per kilowatt-hour.

To put that in context, the average cost in the province of natural gas electricity using the lowest-cost technology — before a carbon tax is factored in — is 5.4 cents per kilowatt-hour, according to the Canadian Energy Research Institute. The same data says the average cost of wind power generation in Alberta has fallen to 5.2 cents per kilowatt-hour.

Could Alberta see cancelled contracts too?

With multi-decade contracts in place, it is unclear where Kenney stands on the cancellation of contracts. He said in last week’s press conference that he would not cancel what he called “good-faith contracts.” However, his bottom line was that he would not subsidize renewables. So would he uphold contracts with a minimum-price guarantee?

When the United Conservative Party media representatives were asked for comment they said the rest of the party’s platform would be revealed in due course.

“The challenge in renewables in Alberta has been the lack of availability of long-term power purchase agreements,” said Dan Balaban, the CEO and president of Calgary-based Greengate Power. “And that’s really what the Notley government implemented through its renewable electricity program.”

Balaban says he is confident the industry will remain viable regardless of who wins the upcoming election, but he hopes the industry’s policies aren’t politicized.

Leach speculates that Ontario’s feed-in tariff program has led to a “massive influence” over the perception of renewables in Alberta.

“I think in some ways Mr. Kenney’s comments are reflective of the impression that people have about renewables in Canada, in Alberta, in Ontario — that they’re more expensive and the only way you get them in the market at all is through large subsidies paying above-market prices for electricity.”

Balaban pointed out that growth in renewables used to be driven by environmental considerations and the need to address climate change. “But now that renewables are the lowest cost source of power generation that we have available to us, it also makes economic sense.”

Kenney did leave the door open to the growth of the renewables industry, saying “if more wind and solar can come onto the grid by competing on a market basis with other forms of power production, we’ll absolutely embrace that.”

“A lot of this stuff is right now being subsidized by the carbon tax, which we’re scrapping on Day One of the legislature. So no carbon tax [and] no subsidies for power sources and power that are higher than the market rate.”

Even without cost guarantees, Leach said it’s not likely renewables will disappear. But he said eliminating cost guarantees would make financing the initial capital investment for wind or solar farms much more challenging.

“That doesn’t mean that the project wouldn’t make money in the long term. It just means that it’s harder to finance.”

Sarah is a climate change reporter with the Winnipeg Free Press, formerly a freelance journalist based in Calgary. She reports…