Another ‘harvest from hell’: Canada’s farmers forced to acclimatize to weird weather

Several rural counties have declared local agricultural emergencies year after year, as farmers are increasingly reacting to — and preparing for — a new climate reality

By Sharon J. Riley
Share
A farmer in northern Alberta inspects a canola crop. “The projections for the future of the impact of climate change on agriculture in the prairies are are really quite concerning,” Debra Davidson, a professor at the University of Alberta, says. Photo: Amber Bracken / The Narwhal

Late this summer, at least 12 counties in Manitoba declared a “state of agricultural emergency.” It was too dry.

In November, two Alberta counties declared “municipal agriculture disasters.” It was too wet.

And they weren’t the first in the province to point out the difficulties farmers are facing this year.

In Grande Prairie, which declared an agricultural disaster in early November, county officials said in a press release that between 40 and 60 per cent of crops were still in the fields. Early snowfall, they added, was “ending any chance of increasing the figures this season.”

This sort of volatility in weather is only expected to increase, according to Agriculture and Agri-Food Canada. The federal government agency warns on its website that droughts, floods and violent storms are all predicted to increase in frequency as a result of climate change.

All farmers face uncertainty, of course. The weather has never been guaranteed. But the level of uncertainty is predicted to increase dramatically.

In some counties, it’s starting to feel like weird weather is the new norm.

Lac Ste. Anne County declared an agricultural disaster in 2016. And in 2018. And now this year. 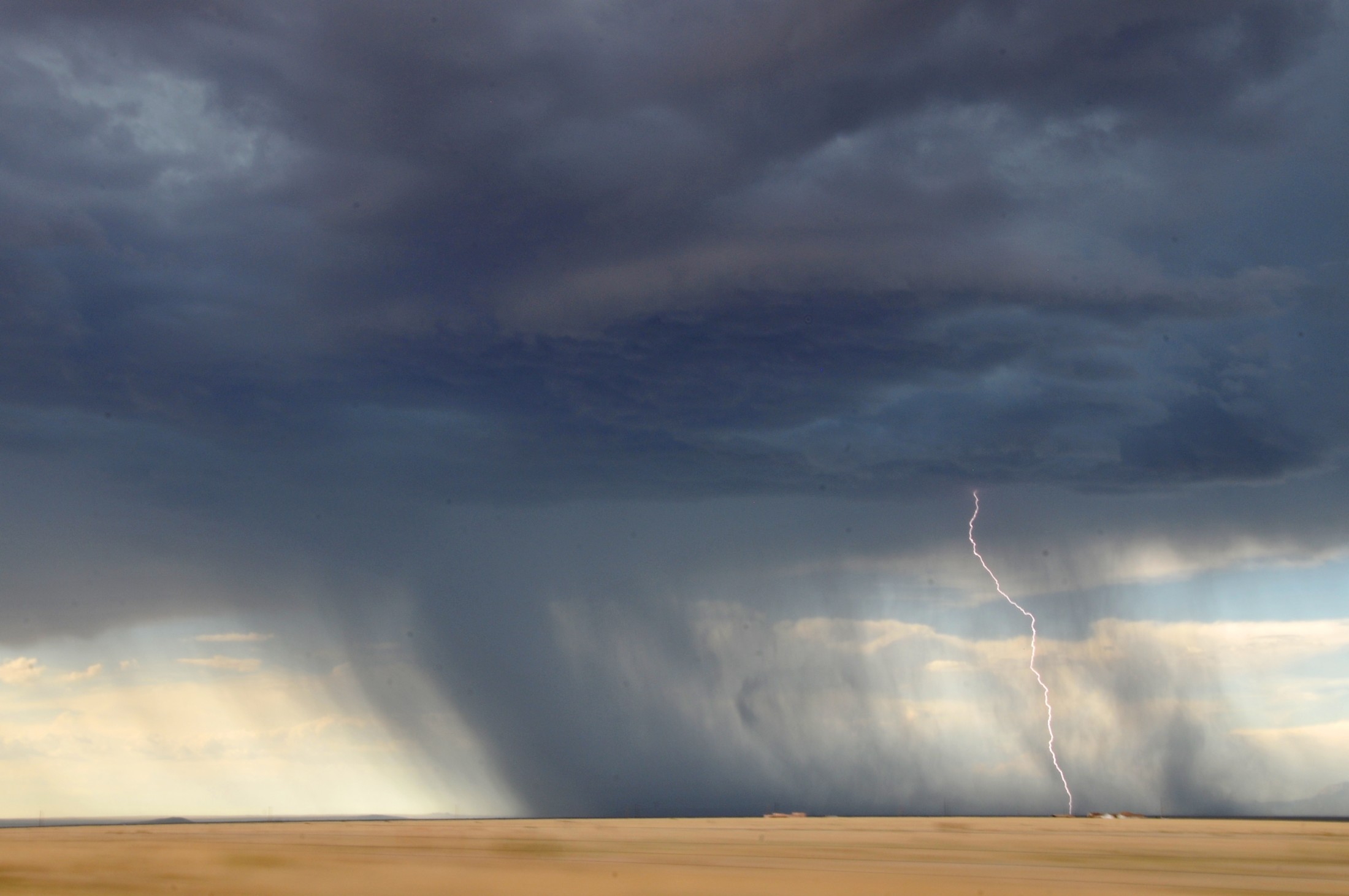 “There’s still the hope that next year will be better,” Stacy Berry, an assistant agricultural manager with Lac Ste. Anne County, told The Narwhal.

But, she says, people “are starting to acknowledge that perhaps next year won’t be better.”

And if next year isn’t better, that means more crops left dead in fields, less feed supply for livestock and, as Berry points out, increasing mental strain on farmers themselves.

“The projections for the future of the impact of climate change on agriculture in the prairies are are really quite concerning,” Debra Davidson, a professor of environmental sociology in the Faculty of Agriculture, Life and Environmental Sciences at the University of Alberta, told The Narwhal. “We don’t in general appear to be prepared to transition our agricultural systems to be more climate resilient.”

“That’s very concerning to me.”

There have always been weather challenges for farmers, but increasingly the agriculture industry is recognizing that climate change will exacerbate the uncertainty of a sector so heavily reliant on the forecast.

“Numerous studies of the impact of climate change suggest that most regions of Canada are projected to warm during the next 60 years,” according to Agriculture and Agri-Food Canada. “A changing climate can have both positive and negative impacts on agriculture.” The agency notes longer frost-free seasons and increased carbon sequestration in soil as potential benefits of a warming climate in Canada.

“A number of positives projections for prairie agriculture — based on the expectation that we’re going to have longer growing seasons and warmer temperatures and whatnot  — those projections of averages don’t account for the increased variability and extremes,” Davidson says.

“We might have the occasional bonus crop, but that will be intermingled with deep droughts and severe weather damage,” she added.

“Our farmers are going to struggle.” 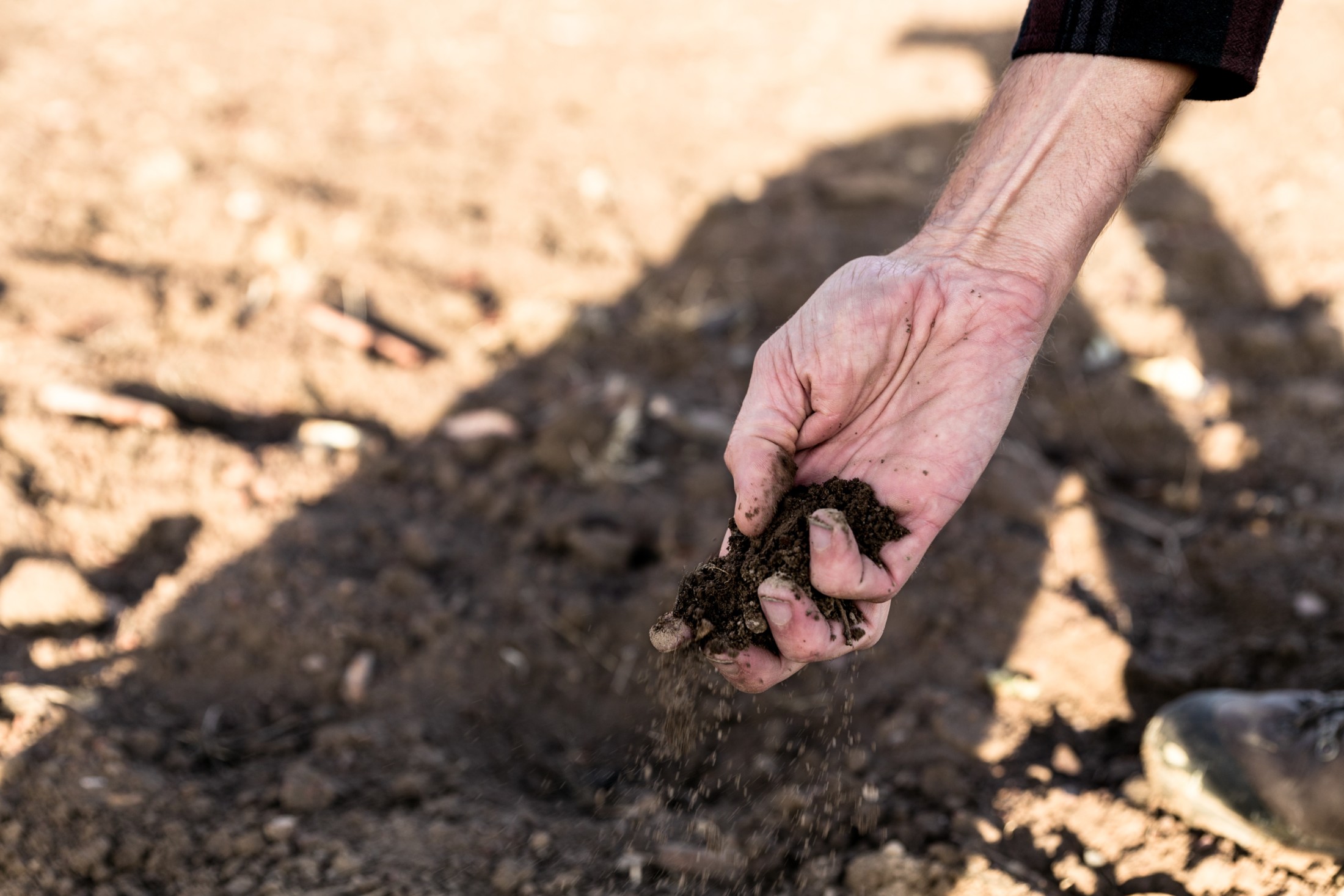 A farmer examines soil in his fields during a drought. “We might have the occasional bonus crop, but that will be intermingled with deep droughts and severe weather damage,” says Debra Davidson of the effects of climate change on agriculture. Photo: Jasper Wilde

In a 2019 report out of the Council of Canadian Academies, agriculture and food was dubbed one of the 12 major areas facing risks from climate change that are “liable to lead to significant losses, damages, or disruptions in Canada over a 20-year timeframe.”

“Climate variability will challenge the business model of farms by increasing the uncertainty associated with the range of future conditions a farmer can expect,” the Council of Canadian Academies report says.

“Impacts of climate change on international markets are another source of uncertainty, with reductions in agricultural production in many developing countries likely to increase demand for Canadian agricultural exports.”

All of this points to increased uncertainty for farmers, who are increasingly left scrambling when agricultural emergencies are declared again and again.

‘Every single person was affected’

In Lac Ste. Anne, a rural county stretched along Highway 43 just northwest of Edmonton, the main change in weather this year has been the rain — hard, relentless, steady rain.

It was what Alberta’s provincial crop report describes as a “cooler than normal growing season” and a “challenging season.”

“We’d only get one or two days of no rain,” Berry says of this summer. “It was causing flooding and crop drowning, as well as an inability to get into the field to do anything.”

“Farms are in terrible shape.”

And this, she says, applies to farms “pretty much across the board.” Crop farmers — wheat, barley, canola — face lower yields and lower-quality products. Livestock farmers don’t have sufficient feed supplies, and may face tough decisions about reducing herd sizes.

“I can confidently say that every single person was affected in some way by the adverse weather,” Berry says.

This is where the beets will stay for the winter. About half our acres will remain unharvested due to the frost. Feels a bit like a punch to the gut. Here's hoping they make for good fertilizer at least! #harvest19 #harvestfromhell pic.twitter.com/2O6dOEmyqt

Berry, who is herself from an agricultural background, says the uncertainty is a major strain. She still helps her parents and brother out with harvest of their seed crops, but lately it’s been hard to plan.

“I would get, you know, an hours notice, saying that they wanted to hit the fields and go,” she says.

Rapidly changing forecasts and unseasonable weather, she added, mean “you can’t plan even days in advance.” You wait until it’s not raining and you go for it.

Berry has started to notice shifts in farmers’ behaviour as a result. Whatever they might believe about the causes of the changing climate, some are judging it prudent to be prepared. They’re converting crops back to pasture land, or investing in grain dryers. 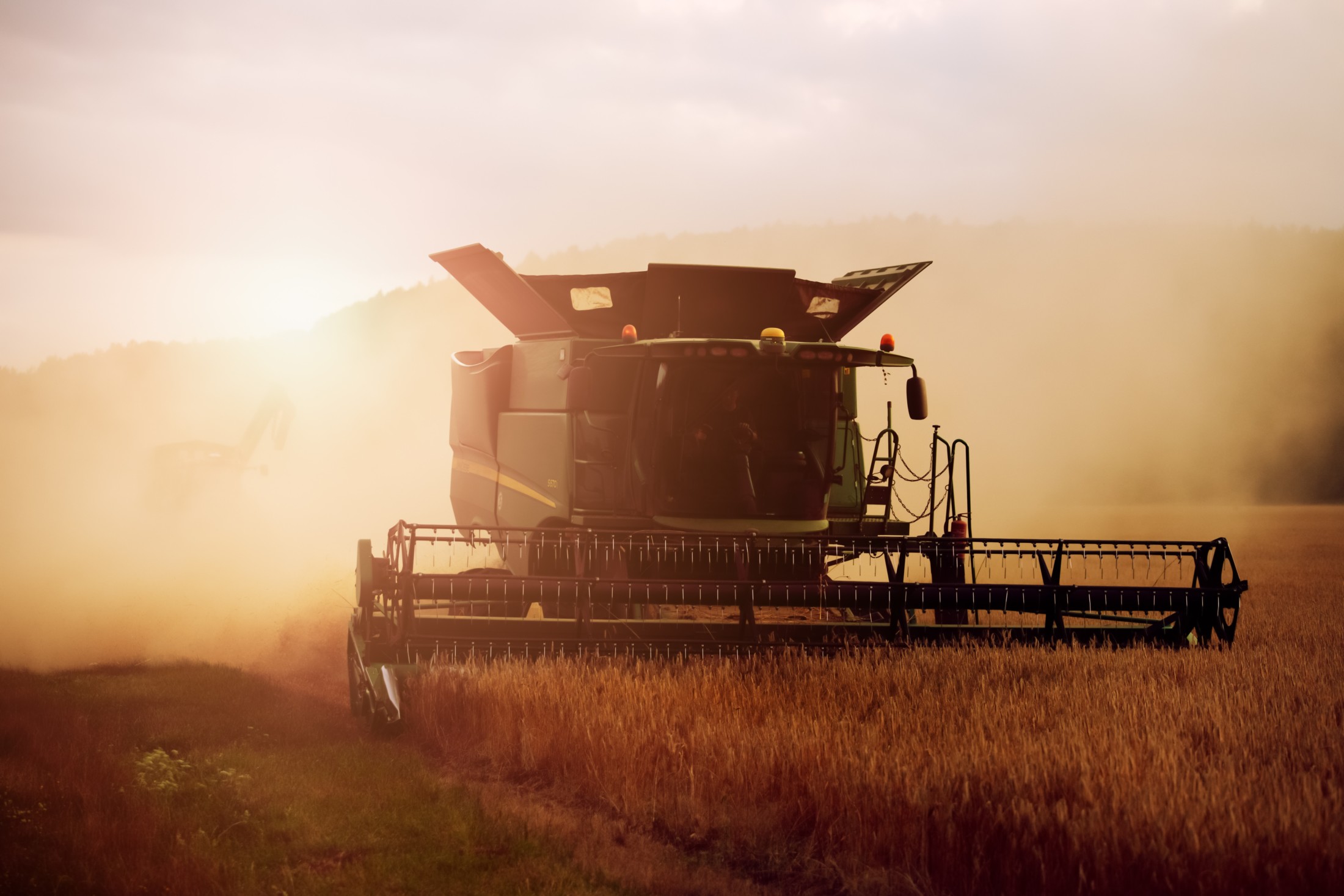 A combine at harvest time. In Alberta, researchers found that farmers are adopting climate-mitigative practises, including zero-till techniques, conserving wetlands and installing solar panels — whether or not they believe in human-caused climate change. Photo: Robert Wiedemann

Scientists estimate that food systems are responsible for somewhere between 19 and 29 per cent of global anthropogenic greenhouse gas emissions, making farmers also prime candidates for greenhouse gas reduction and climate change mitigation — they shoulder a lot of responsibility, while also dealing with the repercussions.

“Every farmer has to make a living, [so] the bottom line necessarily factors in regardless of how ecologically conscious they are,” Davidson, lead author on the paper, says, noting that “many, many farmers have strong ecological values and use those values to guide their decision making.”

The study, based on a survey of farmers in Alberta, found that though they may be interested in conservation, many farmers did not agree with the consensus of climate scientists that climate change is driven by human activity.

“Farmers are willing to comment upon what they see as some pretty significant changes in weather patterns in recent years that they haven’t seen in the past,” Davidson tells me. “They don’t necessarily attribute those changes to climate change.”

That, however, did not influence a farmer’s likelihood to adopt mitigation measures.

And so it seems that no matter what a person may believe about climate change, most were still taking steps that had the effect of mitigating emissions. 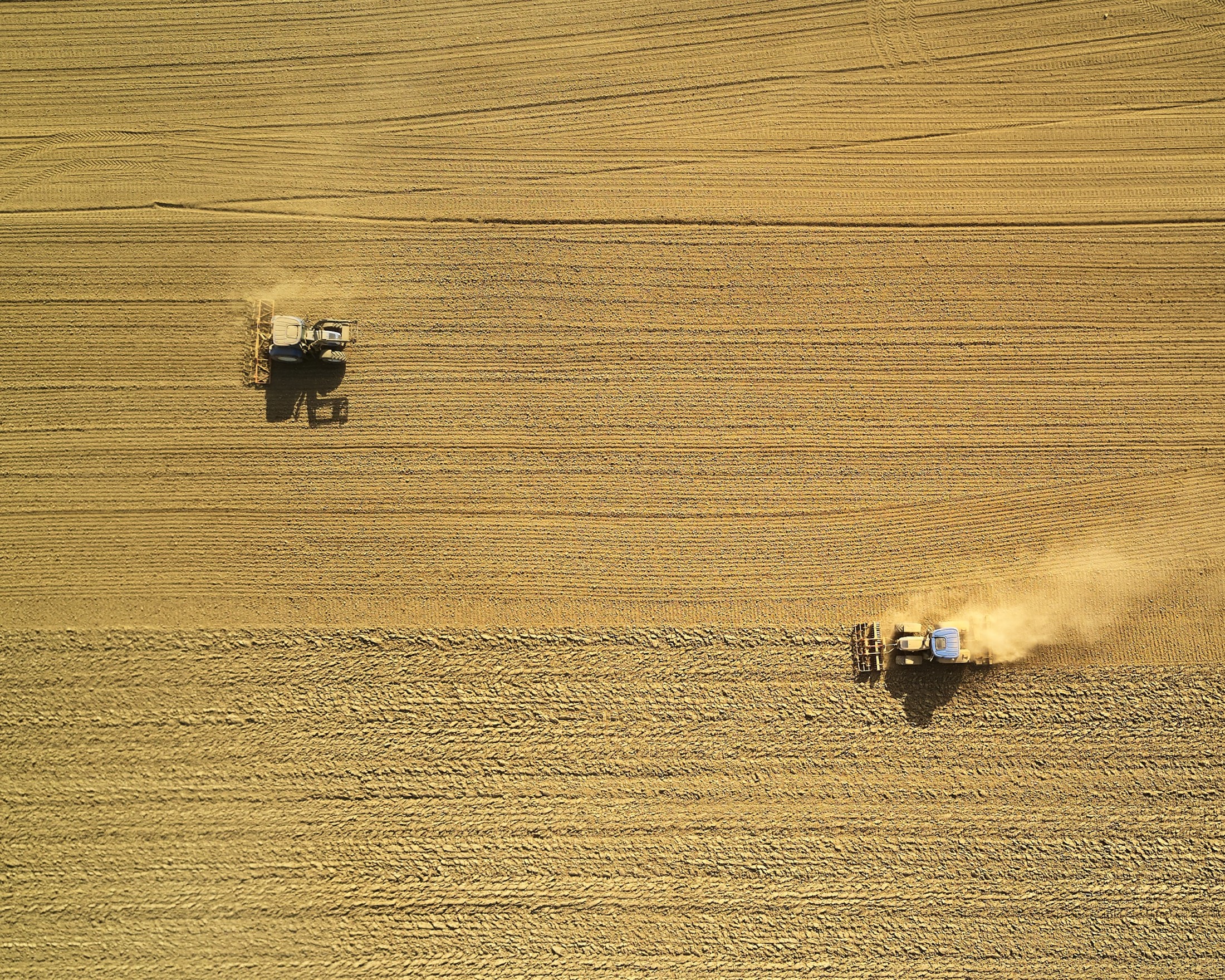 Tractors in a field at harvest time. It’s estimated that food systems are responsible for somewhere between 19 and 29 per cent of global anthropogenic greenhouse gas emissions. Photo: Johny Goerend

This year’s agricultural disaster declarations come at a time when the political debate around climate change is as heated as ever.

Climate change, Davidson says, “is a scientific issue and a livelihood issue and a social survival issue.” But now, particularly in parts of rural Alberta, it is often viewed more as a political issue.

“Where is that acute and also more troubling than in places like rural Alberta?” she asks. “We’ve got communities who really are quite vulnerable to the impact of climate change.”

All of this is tough for the business of agriculture, of course. But Berry points out it’s also hard on farmers personally.

This year’s crop conditions have led industry leaders in the prairies to declare a “harvest from hell.”

If this sounds familiar, it’s because farmers were saying the same thing in 2017. And 2016. Year after year of “harvests from hell” take a toll on farmers.

And it's over 2016 #harvestfromhell Next year we'll try rice pic.twitter.com/LMXvEXQive

In Lac Ste. Ann County, Berry points out that an agricultural disaster has been declared three times in the last four years.

Banner: A farmer in northern Alberta inspects a canola crop. “The projections for the future of the impact of climate change on agriculture in the prairies are are really quite concerning,” Debra Davidson, a professor at the University of Alberta, says. Photo: Amber Bracken / The Narwhal

How natural disasters are causing climate migration within Canada

As Canadians increasingly feel the effects of the global climate crisis, natural disasters will likely...