Auditor General’s Report: B.C. Oil and Gas Industry Handed $1.25B in Incentives Since 2009

According to British Columbia’s auditor general, the province has handed out $1.25 billion in financial incentives to the oil and gas sector since 2009 to encourage production.

Auditor General Carol Bellringer outlined the incentives in her 2013-2014 summary of the province’s financial statements.

“To encourage production of oil and natural gas in B.C., the province provides financial incentives to oil and gas producers,” she said in the report.

“Producers have incurred expenditures that will qualify for $1.25 billion in incentive credits,” she said, “but have not yet produced enough oil or natural gas to claim these amounts.”

That means as producers generate revenue, they can simply claim their incentive credits, reducing how much money the B.C. government collects on the resource.

“In this case,” she notes in the report, “this represents a reduction of $1.25 billion in revenue in future years if all the incentives are used.”

B.C Premier Christy Clark has portrayed liquefied natural gas, or LNG, as an economic saviour for the province, although her government has consistently made financial and environmental concessions to the natural gas industry to attract business to the province.

In a recent interview with Global News, Clark said: “I will do everything in my power to make LNG work.”

“LNG will transform our economy, pay off debt, and create a better future for our children,” she said.

Clark’s promise of a debt-free future for B.C. rests almost solely on the creation of an LNG export industry. But to date, that industry remains almost entirely speculative in nature. Although several companies have invested large amounts of money for the prospect of exporting B.C.'s natural gas, none have made any final investment commitments.

This summer, major gas developer Apache backed out of a partnership with Chevron to construct an LNG plant in Kitimat, citing a weak gas market. Malaysian gas giant Petronas also recently threatened to back out of its proposed $10-billion LNG plant near Prince Rupert — and perhaps would have had the Clark government not dropped income tax rates for the industry by 50 per cent.

In her report, Bellringer also noted B.C. has some questionable accounting methods.

“I hope that the report does show that, you know, there are lots of things that need to be very carefully looked at in a set of financial statements.”

Bellringer added that the incentives paid to the oil and gas industry “tell an interesting story.”

Since 2009 the province has paid industry, in the form of credits, a total of $1.25 billion with $587 million of that handed out to industry last year alone. 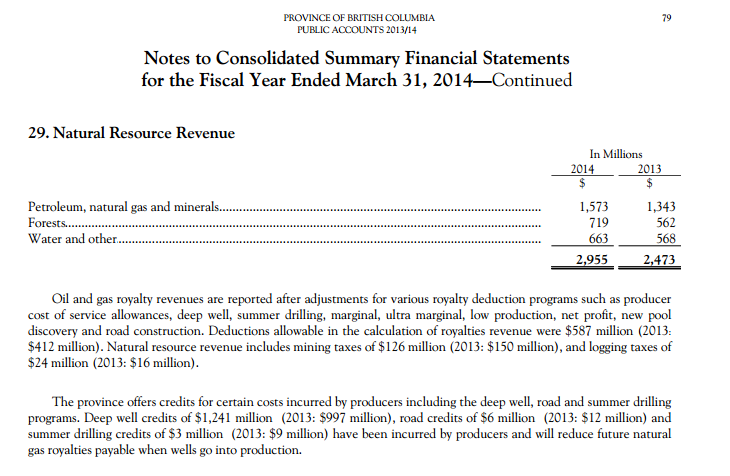 “The incentives claimed are quite large,” she added, “almost 30 per cent of the gross royalty revenue received by government in fiscal 2014.”

“When these producers claim their incentive credits, that money will be deducted from the royalties that they owe, thereby reducing the amount of money government will generate,” Bellringer said in her report.

A 2012 report released by Blue Green Canada, a coalition of environmental and labour groups, noted that Canada’s existing tax incentives for the oil and gas sector frustrates the creation of new jobs in the emerging clean energy sector.

The report, called More Bang for our Buck: How Canada Can Create More Energy Jobs and Less Pollution, stated oil and gas incentives are “the wrong direction if we hope to tap into a growing share of the jobs and opportunity of the global transition towards renewable energy.”

How the Wet’suwet’en crisis could have played out differently

Amid escalating tensions and armed RCMP responses, leaders say Canada must abide by the ‘rule...