Share
Peace Valley farmer Ken Boon stands in front of solar panels on his property. The Boon's farmland will become the site of a relocated highway as a result of Site C dam construction. Photo: Emma Gilchrist
In-Depth

A cute graphic of white houses with rooftop solar panels is featured on the U.S. Department of Energy’s website. “Solar Homes Sell for More Money,” the government tells viewers, citing studies that show solar adds an average US$15,000 to the resell value of a home.

“Just like a renovated kitchen or a finished basement increases a home’s value, solar has been shown to boost home valuation and shorten a home’s time on the market.”

In contrast to the U.S. government’s cheery promotion of solar, BC Hydro’s webpage called “Solar Power & Heating for Your Home” has a blurry photograph of a man putting on a sweater, and technical information that begins with the somber news that it will take a B.C. homeowner at least 20 years to recoup the cost of a solar installation.

“Do your research on the practicality of going solar in B.C.,” advises the webpage.

The practicality of going solar in B.C. turns out to be quite gloomy compared to jurisdictions like the U.S. and Ontario, where supportive government policies have fueled a recent explosion in the use and widespread benefits of solar. 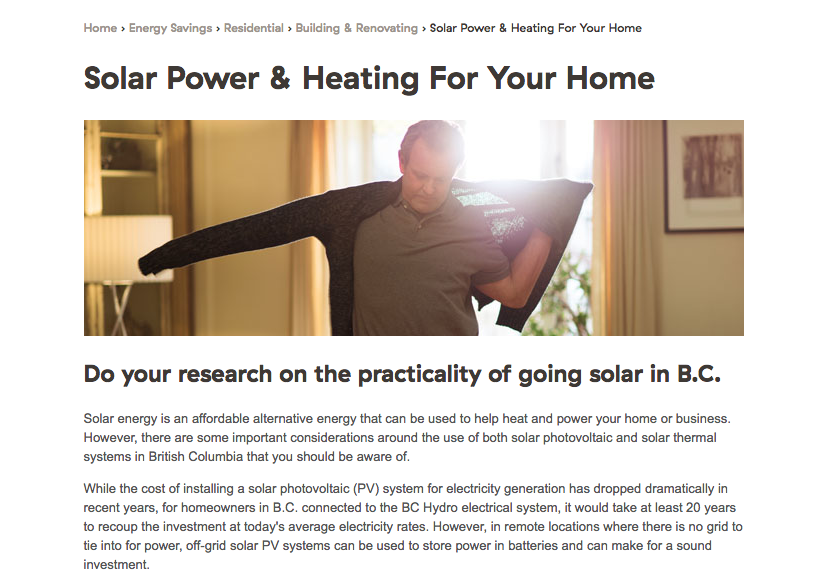 Screenshot of BC Hydro’s webpage on solar energy in B.C.

New solar in Ontario generates 2,400 megawatts of electricity for the common grid, more than double the electricity that B.C.’s Site C hydro dam will produce at a projected cost of $8.8 billion and an environmental price tag the Royal Society of Canada says is both unprecedented and alarming.

In approximately the same timeframe since the B.C. government announced plans to build Site C in 2010, Ontario’s solar industry has also created 5,000 full-time jobs at a “minimal” cost to ratepayers, according to the Canadian Solar Industries Association.

Not only has Ontario become Canada’s solar leader but it is now the third largest solar jurisdiction in North America after California and Arizona, not known for their cloudy days.

“In 2009, there was virtually no solar in Ontario,” John Gorman, President and CEO of the Canadian Solar Industries Association told DeSmog. “It was a question of political will to put the policies in place.”

The political will to promote solar has also reaped astonishing results for both the economy and the environment in the United States, where solar policies implemented by the Obama administration recently achieved a national milestone of one million solar-powered homes.

The American solar industry now employs 209,000 workers, eight per cent of them armed forces veterans. Adding to that sunny economic news, the number of jobs in American solar has increased by 20 per cent in each of the past three years alone, and continues to grow.

Solar’s impressive ability to create lasting employment in Ontario and the U.S. compares favourably to the 10,000 jobs promised during Site C’s construction phase by B.C. Premier Christy Clark, who touts job creation as one of the primary reasons to build the dam but often sidesteps the fact that most Site C jobs will be relatively short-term.

Clark’s single-minded focus on Site C as an energy source has drawn sharp rebuke from the heads of the Canadian Wind Energy Association and the Canadian Geothermal Energy Association, who say the decision to build Site C has curtailed development of their industries in B.C. and, with it, prospects to create lasting jobs in clean energy.

Gorman said the potential of solar in B.C. also remains virtually untapped, even though neighbouring Alberta and Saskatchewan are now poised to follow Ontario’s lead and embrace policies to grow their solar industries significantly.

“B.C. is just, to the best of my knowledge, not pursuing solar electricity aggressively or contemplating it in any serious way.”

BC Hydro told the Joint Review Panel that examined Site C for the federal and provincial governments that solar was “economically unfeasible.” But Gorman said solar has proven to be an excellent investment not just in Ontario and the U.S. but all over the world.

“That’s just plainly false,” he said of the statement that solar is economically unfeasible, pointing out that in some jurisdictions solar is now cheaper even than coal-fired power, traditionally one of the cheapest and dirtiest forms of energy.

In just five years, the price of solar in Ontario has dropped by 70 per cent, and the retail cost of solar is now cheaper than other electricity, said Gorman. Another 600 to 700 megawatts of solar power are already under construction in Ontario or have been procured. “Our solar is still higher cost than many jurisdictions in the United States, but relative to where we started we’re making huge progress.”

When contacted by DeSmog, B.C. Energy Ministry spokesperson Suntanu Dalal referred questions about government solar policy to BC Hydro. BC Hydro media spokesperson Kevin Aquino did not return two calls from DeSmog requesting clarification of BC Hydro’s statement that solar is not economically feasible in B.C., and asking for details about solar policy.

In a notable departure from the 20 to 25 years BC Hydro says it would take B.C. homeowners to recoup an investment in solar panels, Gorman says Ontario homeowners need only seven years to earn back the $15,000 cost of a typical home solar installation.

And then the news gets even brighter if you go solar in Ontario. After paying back the cost of installing solar panels, average homeowners can pocket profits of approximately $2,000 a year for supplying solar energy to the grid, Gorman confirmed.

Despite a comparative lack of incentive to go solar in B.C., hundreds of B.C. home and business owners have installed solar panels to replace or ratchet down their use of hydro, using BC Hydro’s net metering program to provide extra energy to the grid.

One of those homeowners is Hudson’s Hope hotel manager and beekeeper Guy Armitage, who will be compelled to leave the home he shares with his wife and elderly father as a result of the Site C dam.

One of 70 Peace Valley landowners affected by the dam, Armitage will lose part of his property to Site C’s reservoir, which will permanently flood more than 100 kilometres of the heritage Peace River and its tributaries.

To demonstrate his belief that Site C’s power is not needed, in 2014 Armitage covered the roof of his south-facing bungalow with 50 solar panels at a cost of $43,000, including about $12,500 for installation. During the first full year his solar system was operational, the panels provided all the electricity his family required. Armitage even received a $758 cheque from BC Hydro for selling his surplus power to the grid.

“It was a statement about Site C,” Armitage said of his decision to go solar. “Solar is the map of the future. They’re doing it all over the world. But we’re locked into hydro here.”

If Armitage lived in Ontario, his cost to go solar could be significantly reduced, in part because the province has adopted what Gorman calls the “European model” for solar, embraced by almost 70 per cent of solar jurisdictions around the world.

In Ontario, similar to policies in Europe, homeowners can sign 20-year contracts with the province’s utility company that guarantee a set rate for their electricity.

Across the border in the U.S., 41 states have net metering policies and the government actively promotes borrowing tools that “unlock new ways to go solar” through special financing programs and other initiatives.

These include a federal tax credit that refunds 30 per cent of the cost of installing a solar system, solar energy loans with below-market interest rates, and the opportunity to slash household energy bills by leasing rooftop solar energy systems owned by solar companies.

This year, the U.S. government invested US$241 million in the SunShot Energy Initiative, which funds initiatives aimed at making the cost of solar competitive with traditional forms of energy by the end of the decade.

Since SunShot’s inception in 2011, the price of U.S. solar has dropped by one-half, according to Acting SunShot Director Rebecca Jones-Albertus.

“In 20 years, solar will be ubiquitous in the U.S. and will provide a significant fraction of our nation’s electricity as a clean, secure, inexpensive electricity source,” Jones-Albertus told DeSmog. “Our children will have solar available as a standard feature when shopping for their first home, much like central air or granite countertops are today.”

By 2050, solar is expected to supply 27 per cent of power in the U.S., in keeping with the International Energy Association declaration that solar can meet one-quarter of the world’s energy needs by 2050.

“Solar energy is key to achieving the nation’s climate goals while bringing economic development and energy security to our local communities,” said Jones-Albertus.

In contrast to the U.S. Department of Energy’s website, which provides easily accessible and detailed information about the logistics and benefits of going solar, the B.C. Energy Ministry’s website has a small section on renewable energy containing only a brief blurb about geothermal and not a word about solar.

B.C.’s largest solar facility, Kimberly’s SunMine, was constructed on the site of the former Sullivan lead and zinc mine owned by mining giant Teck. The project received $1 million from the B.C. government’s Innovative Clean Energy Fund.

This year, however, solar was not on the list when Premier Clark dished out $11.9 million from the Innovative Clean Energy Fund for “clean energy vehicles, clean air and clean water.” The majority of the fund went to help consumers purchase electric vehicles worth up to $77,000 apiece, a move lauded by the New Car Dealers Association of B.C.

Peace Valley farmer Ken Boon stands in front of solar panels on his property. The Boon's farmland will become the site of a relocated highway as a result of Site C dam construction. Photo: Emma Gilchrist
Published By