Peace Valley farmers and outspoken critics of the Site C dam Ken and Arlene Boon say BC Hydro intends to force them from their third-generation family farm by the end of this year even though the dam would not flood their land until 2024.

The Boons received the unexpected news from their lawyer, following a conversation the lawyer had with officials from BC Hydro’s Properties division.

“It was a shocker,” Ken Boon, says. “We didn’t know they wanted us out by Christmas.”

Boon says if they refuse to sell their farm to BC Hydro it will be expropriated for the “re-alignment” of Highway 29 away from the Site C flood zone, a two-year construction project that BC Hydro says must begin in 2017.

For reasons that have never been explained to the Boons’ satisfaction, BC Hydro intends to route the new highway right through the couples’ farm buildings and home. The highway would also destroy a renovated log house where Arlene’s 81-year-old mother lives.

“Why are we discussing the highway relocation in year one of a nine year project?” asks Arlene Boon.

“As a property owner you don’t have any rights. If BC Hydro or Highways want to expropriate you, they will.”

Arlene Boon stands on her property near a BC Hydro highway marker. The highway's centre line is expected to run directly between the Boon's house and the wood shed to its left. Photo: Sarah Cox

Arthur Hadland, a former Peace River Regional District director, says he believes BC Hydro wants the Boons off their land by the end of the year because Ken is the outspoken president of the Peace Valley Landowners Association. The association, which represents 70 landowners in the Peace River Valley, has a court case against Site C, one of four on-going legal challenges against the $8.8 billion dam.

“It’s divide and conquer. The landowners have been a pretty solid group. But just like any organization if you cut the head off you will lose the power. They just want to diminish the power of the landowners,” Hadland says.

BC Hydro spokesperson Dave Conway says the Crown corporation cannot discuss its negotiations with individual landowners in the Peace River Valley. Conway confirms, however, that BC Hydro is having “conversations” with landowners along a stretch of the valley called Bear Flat/Cache Creek, where the Boons live.

BC Hydro is “moving up the valley” and Cache Creek is “one of the first areas affected by the highway re-alignment,” Conway says.

Asked if BC Hydro will expropriate the Boon’s farm and other nearby farms if owners refuse to sell, Conway says BC Hydro has the legal authority to expropriate land.

“But that’s not the way we like to work. We like to come to a negotiated settlement with people,” Conway said.

Arlene Boon says there can never be agreement when landowners consider their property to be priceless for reasons other than monetary value.

“We are being forced off. When you are not a willing seller you’re being forced to put a price on something [that] is not for sale and in your mind would never be for sale.”

The Boons say it is curious that BC Hydro said nothing about an end-of-the-year deadline for acquiring land during a March 10 meeting the Crown corporation held with them and about a dozen other Bear Flat/Cache Creek landowners. The couple heard the news from their lawyer less than two weeks after that meeting.

The meeting aimed to provide landowners with information about the Site C highway re-alignment, which will entail re-construction of 8.5 kilometres of the highway in six different sections and four new bridges across rivers that would be flooded by the dam’s reservoir. The reservoir would stretch for 107 kilometres along the Peace River and its tributaries, almost the same distance as driving from Victoria to Nanaimo.

Last year, 70 Peace Valley landowners affected by Site C asked BC Hydro for a common framework agreement for discussing land acquisition issues, a framework Ken Boon describes as  “a general guideline so that everybody would be treated more or less the same.”

Following the surprise news from their lawyer that they may have to relinquish their farm by the end of this year, the Boons asked BC Hydro to send them written information about the timeline for highway relocation, a construction project that BC Hydro documents say will cost $530 million.

In response, BC Hydro sent the Boons and other landowners a two-page information bulletin in May. The bulletin, dated May 2016, says BC Hydro “is acquiring land in the Bear Flat/Cache Creek area in 2016 in preparation for the start of highway realignment work.” It says BC Hydro evaluated two highway alignment options: a corridor along the reservoir and an inland corridor.

Hydro says it chose the corridor along the reservoir because it would increase the length of passing opportunities for drivers, has fewer technical challenges, better geological conditions, affects a smaller area of private land, and has “less impact” on agricultural land.

But Colin Meek, one of the farmers who would lose a third-generation family farm to the highway re-alignment, points out that losing less agricultural land is of little value “when you get rid of the farmer.” Meek and his partner Leslee Jardine live in a house that would become the centre line of the new highway, according to surveying stakes recently put in the ground by BC Hydro contractors.

“They just keep the pressure on,” Meek says. 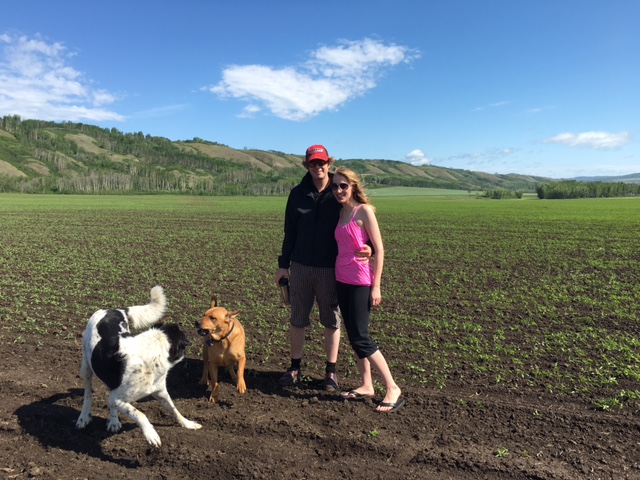 Meek and Jardine are awaiting organic certification of their Class 1 farmland, which is among the 6,500 hectares of farmland that will be destroyed by Site C, and an additional 6,000 hectares that may be lost. They grow commercial hemp for food (hemp hearts) and have a large market garden where they cultivate dozens of types of vegetables and herbs, including eggplant, peppers and tomatoes.

Meek says someone should assess the psychological impacts of Site C on Peace Valley residents, whom he says are suffering from trauma and stress as a result of the threat of losing their homes and farms and putting up with Hydro contractors drilling deep holes beside their houses and in their fields. “Try waking up in the middle of the night because you’re having a dream that a CAT is going through your bedroom.”

Based on advice from their lawyer, the Boons and other landowners affected by the highway re-routing recently signed access agreements with BC Hydro, allowing the Crown corporation to enter their land for geotechnical, wildlife and heritage studies in exchange for modest financial compensation. Ken Boon says they didn’t have a choice because Hydro has the legal right to access their land with or without their agreement.

In a letter to affected landowners, BC Hydro says different teams on their land will consist of up to eight people per team, and that equipment on their property could “include a drill rig or excavator, pump, compressor, and water tank. In addition to the drill, there may be one or two support vehicles.”

The letter also points to the haste with which work is being conducted. “To complete the work on your property as quickly as possible, it is anticipated that investigations would occur up to 10 to 12 hours a day, and up to 5 to 7 days a week, with flexibility to accommodate residents and businesses.”

The Boons were shocked to see a map of their land that has 73 drilling sites marked on it, including one right beside their farmhouse and others in their riverside fields that are so fertile that the overlying layers of topsoil — among the richest in B.C. — are 15 feet deep. The topsoil sits on gravel, which the Boons fear will be excavated to assist in highway construction.

In recent weeks, the Boons have had to deal with drilling rigs, water trucks, a spill in one of their planted fields, contractors whom Ken Boon says “should be required to take a course in Sensitivity 101,” and two security investigators parked in a truck at their end of their driveway without the Boon’s permission or knowledge.

The Boons say the investigators parked on their driveway were the same two men who compiled evidence against them and four other Peace Valley residents for BC Hydro’s on-going civil law suit against some of the people involved in a two-month winter camp at the historic Rocky Mountain Fort site.

As a result of the civil law suit initiated by BC Hydro, the Boons and others named in the suit live with the constant threat of having their assets seized — including their farmland and houses — should they interfere with Hydro’s efforts for highway relocation and other developments associated with the Site C project. The suit, which has some of the hallmarks of a Strategic Law Suit Against Public Participation, or SLAPP suit, is the first time B.C. legal experts are aware of a publicly-owned corporation taking such action.