Discrepancies between the number of sea lice found on farmed salmon during in-house company checks and the number recorded when counts are audited by Fisheries and Oceans Canada reveal that salmon farming companies are regularly under-reporting the number of lice on their fish, a newly released study has found.

The spread of sea lice from salmon farms to wild fish is linked to shrinking wild salmon runs, so farms are required by Fisheries and Oceans Canada to do regular louse counts. If more than three adult lice are found on individual fish while juvenile wild salmon are migrating through the area, the company is obligated to conduct expensive delousing treatments to protect wild fish.

The study led by Sean Godwin, postdoctoral researcher at Dalhousie University, and published this week in the journal Ecological Application, looks at data from 2011 to 2016. Researchers found the number of lice reported during unsupervised counts was 15 per cent lower for one sea louse species and almost 50 per cent lower for a second species when compared to numbers recorded during pre-arranged audits of the counts by Fisheries and Oceans Canada.

When auditors are looking over the shoulders of industry staff, the company and government counts seem to be in agreement, “but, when auditors aren’t there, which is the vast majority of the time, the industry counts go down,” Godwin told The Narwhal.

Those lower numbers mean that delousing treatments of farm fish — either by feeding fish a chemical parasiticide or bathing the fish in hydrogen peroxide — may be delayed or not done at all, Godwin said.

“These treatments are expensive, so there’s a conflict of interest there. If the farm (counts) were accurate instead of under-reported, the public could be more confident that the farms are complying with the regulations that are supposed to safeguard wild salmon,” he said.

“Right now we can’t have that confidence because the companies that are being forced to do these expensive treatments are also providing the data to decide when these treatments are going to happen.” 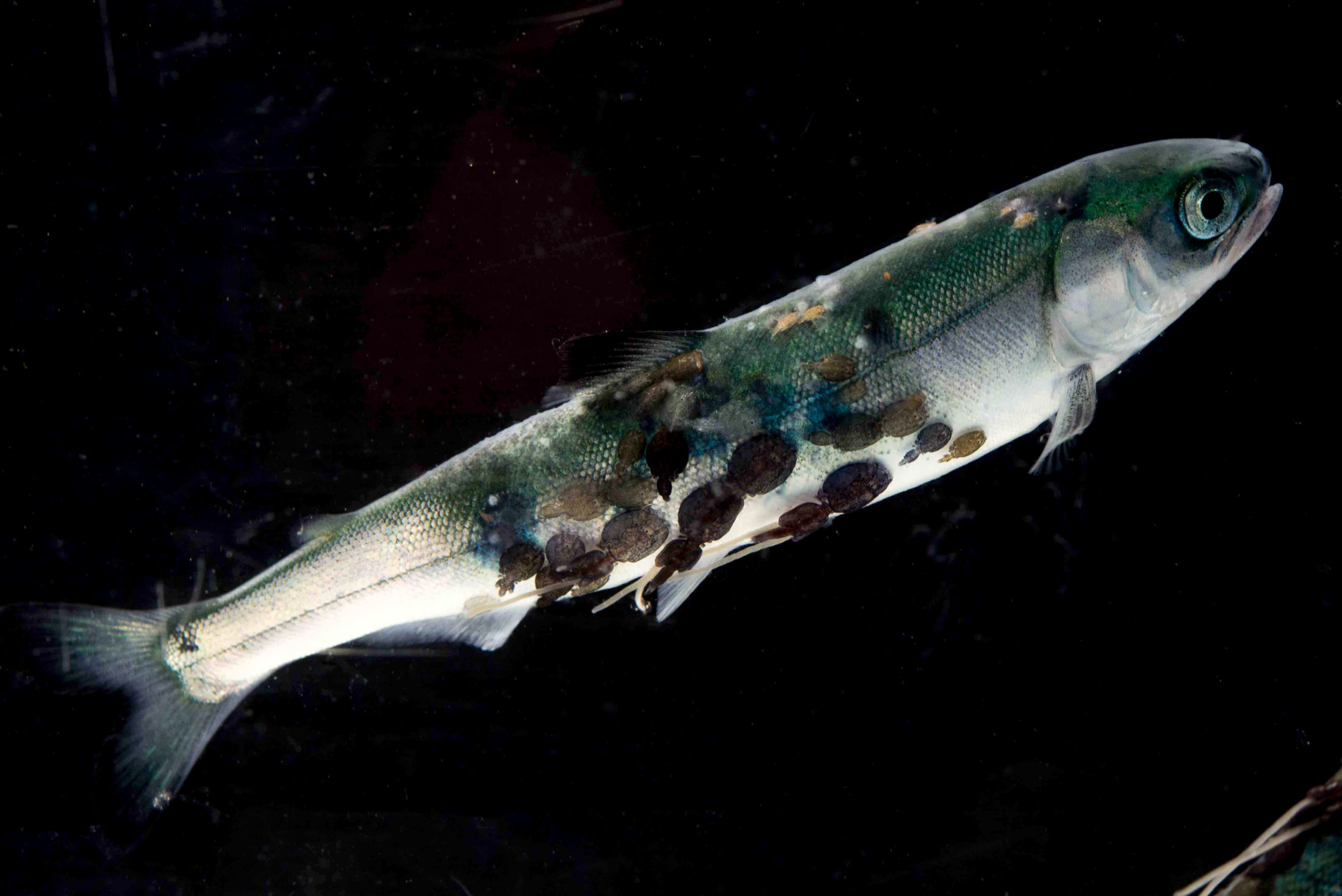 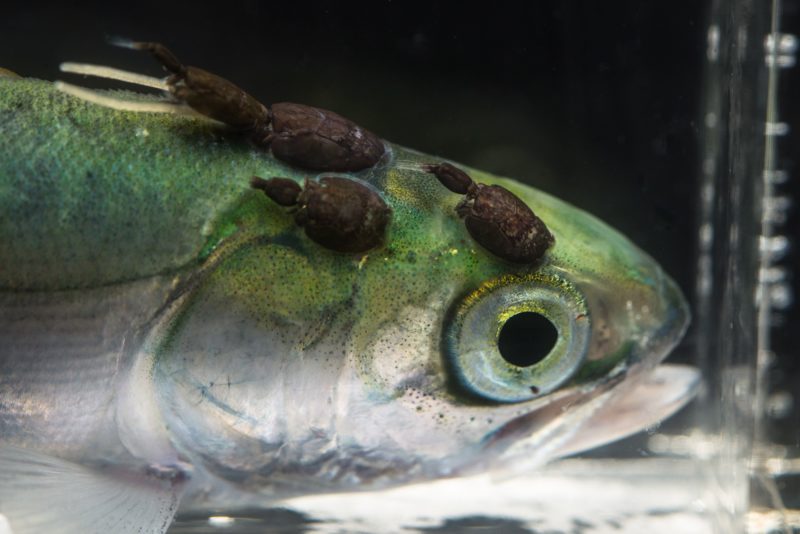 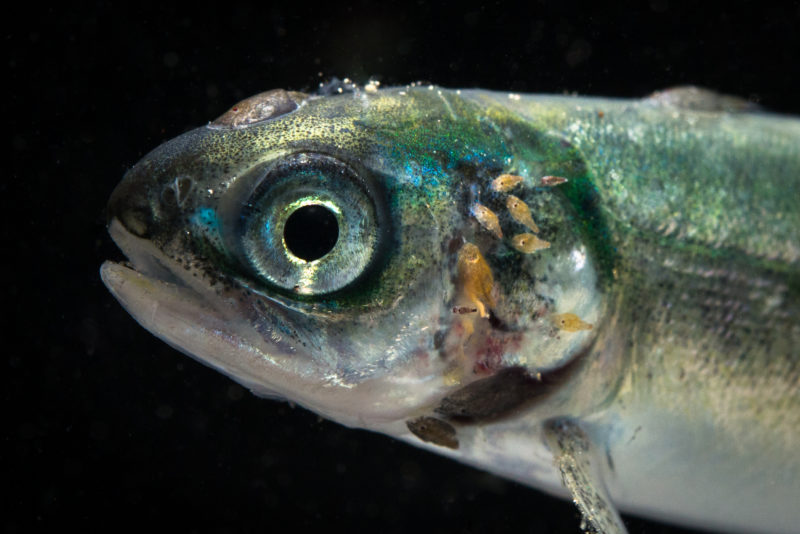 Wild juvenile salmon caught in the Discovery Islands, in B.C., in 2020 being grazed on by immature and adult sea lice. Photo: Tavish Campbell

The B.C. Salmon Farmers Association includes extensive information on its website about measures taken by farms to minimize and treat sea lice.

However, when contacted by The Narwhal, the association would not respond to the study’s findings.

A spokesperson for Fisheries and Oceans Canada said in an e-mailed response to questions from The Narwhal that about 50 per cent of farms are randomly audited for sea lice during the outmigration season and “over 95 per cent have been in compliance.” This year, additional funding was put into targeted audits, which can occur without warning when non-compliance is suspected, and the department is “very confident” in the auditing program, she wrote.

“To date, all deficiency issues have been corrected by companies to the satisfaction of the department without having to proceed or progress to a prosecution,” she wrote.

Godwin’s study suggests that bias would be removed from self-reported numbers if monitoring was conducted by an independent third party.

Alternatively, Fisheries and Oceans Canada (DFO) should conduct audits without advance notice after the company has collected data, so there would always be the risk of a subsequent review, the study says.

“If the salmon farming industry is to continue reporting the counts and, if DFO considers it important to protect wild salmon, DFO should impose some explicit and strong incentives for accurate reporting,” Godwin said. 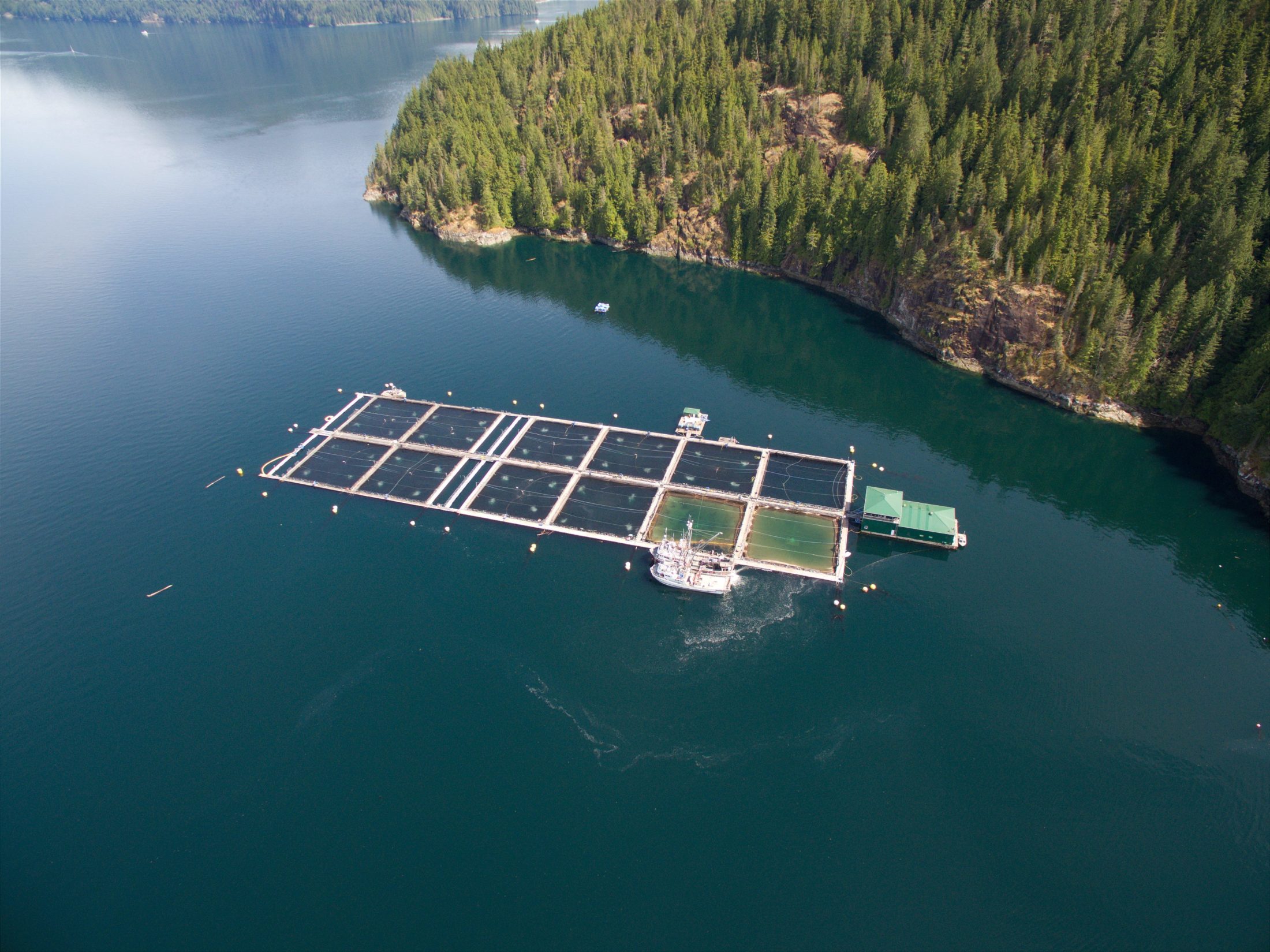 A salmon farm at Sonora Point in the Discovery Islands of B.C. Photo: Tavish Campbell

Fisheries and Oceans Canada said farm sites are selected randomly and given very little warning prior to an audit, but “some site notification is required in order to ensure proper staff and equipment are on site to conduct an effective and in-depth audit. Unannounced spot checks would yield less information and could put staff or fish welfare at risk due to biosecurity protocols.”

Discrepancies in the counts are not surprising, according to Brian Riddell, science advisor with the Pacific Salmon Foundation.

“I don’t say that to be insulting to the entire industry, but there’s something in statistics we call inherent bias. So when people are collecting data and they know there’s a particular consequence, they, quite naturally, will perhaps not be so discriminating,” Riddell said.

The concern is that delousing treatments are not being done when they are needed, which puts wild fish at risk. A major step towards gaining accurate information would be for Fisheries and Oceans Canada to stop notifying companies when they are coming to do an audit, Riddell said.

“Break the chain so there is more of a random check,” he suggested. 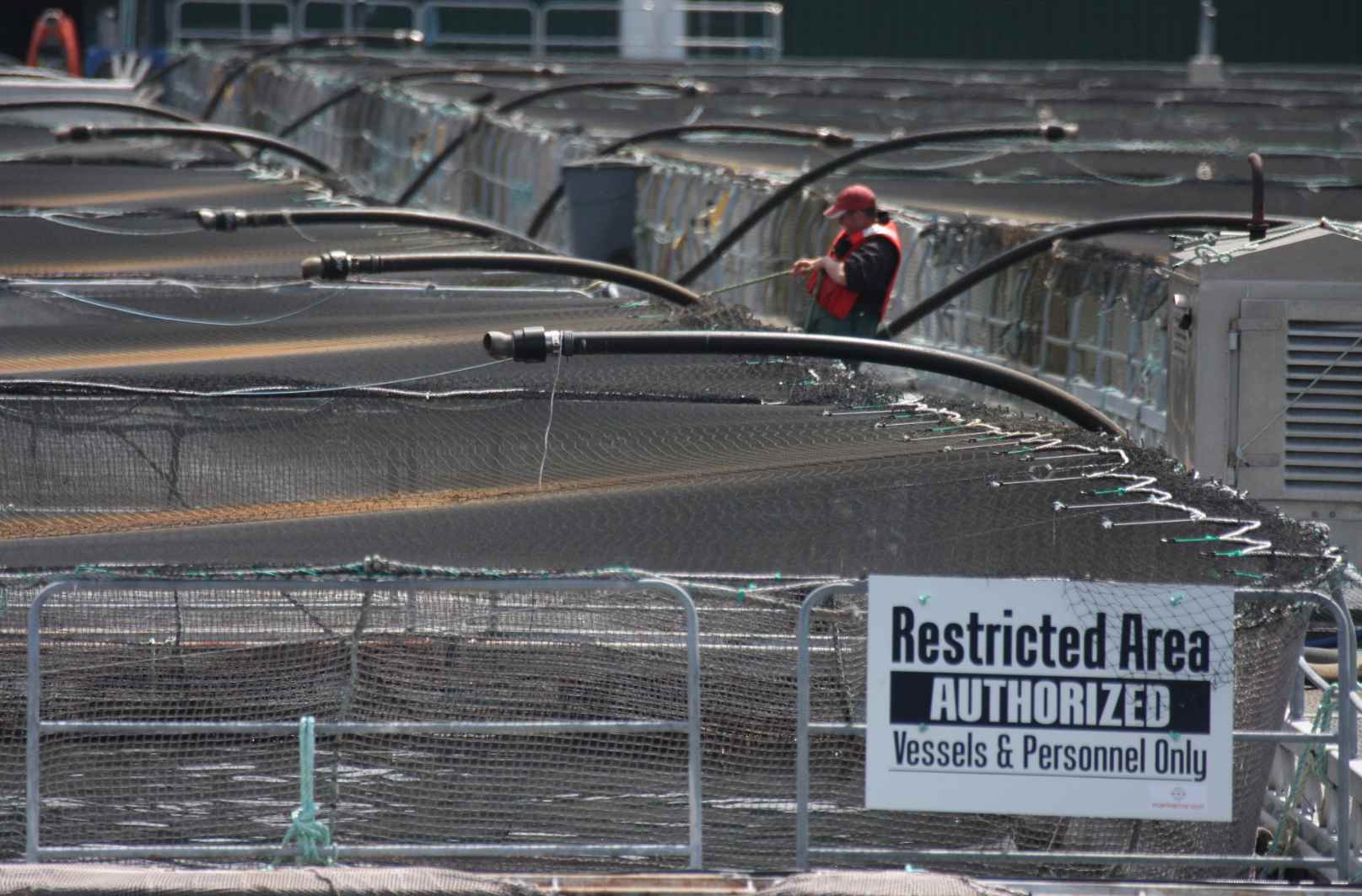 “They’ve lied to the public about the risks of virtually every other aspect of their operations over the years,” Dill told The Narwhal.

“I’d favour counts by a well-trained independent third party. It’s vital for the health of wild salmon,” he said.

The Fraser River sockeye run plummeted to record lows this year and most other salmon runs have been poor.

Craig Orr, conservation advisor for Watershed Watch Salmon Society, said self-reporting is always a concern and the consequent delay in treatments means there is a breakdown of precautionary management of the impacts of lice on wild fish.

“They either delay the treatment of lice or don’t treat it at all because they apparently don’t exceed the threshold, when, in many cases shown by this study, they are exceeding the threshold,” Orr said.

Fears that lice are out of control in salmon farms in B.C. is propelling the push to get farms out of the water and on to land or closed containment pens, said Orr and Riddell.

However, Morton’s preliminary report noted that Fisheries and Oceans Canada granted the industry a 42-day grace period, while juvenile salmon were migrating, during which time the companies were allowed to exceed the number of sea lice thought safe for wild salmon.

“This means that a farm shedding dangerous lice levels into the path of young salmon is protected from consequences, even if they are causing death to millions of wild salmon,” says Morton’s report, which documented sea lice infection rates of 94 per cent in the Discovery Islands, 87 per cent in Nootka Sound, 72 per cent in the Clayoquot Region and a low 34 per cent in the Broughton Archipelago where five fish farms were recently closed. 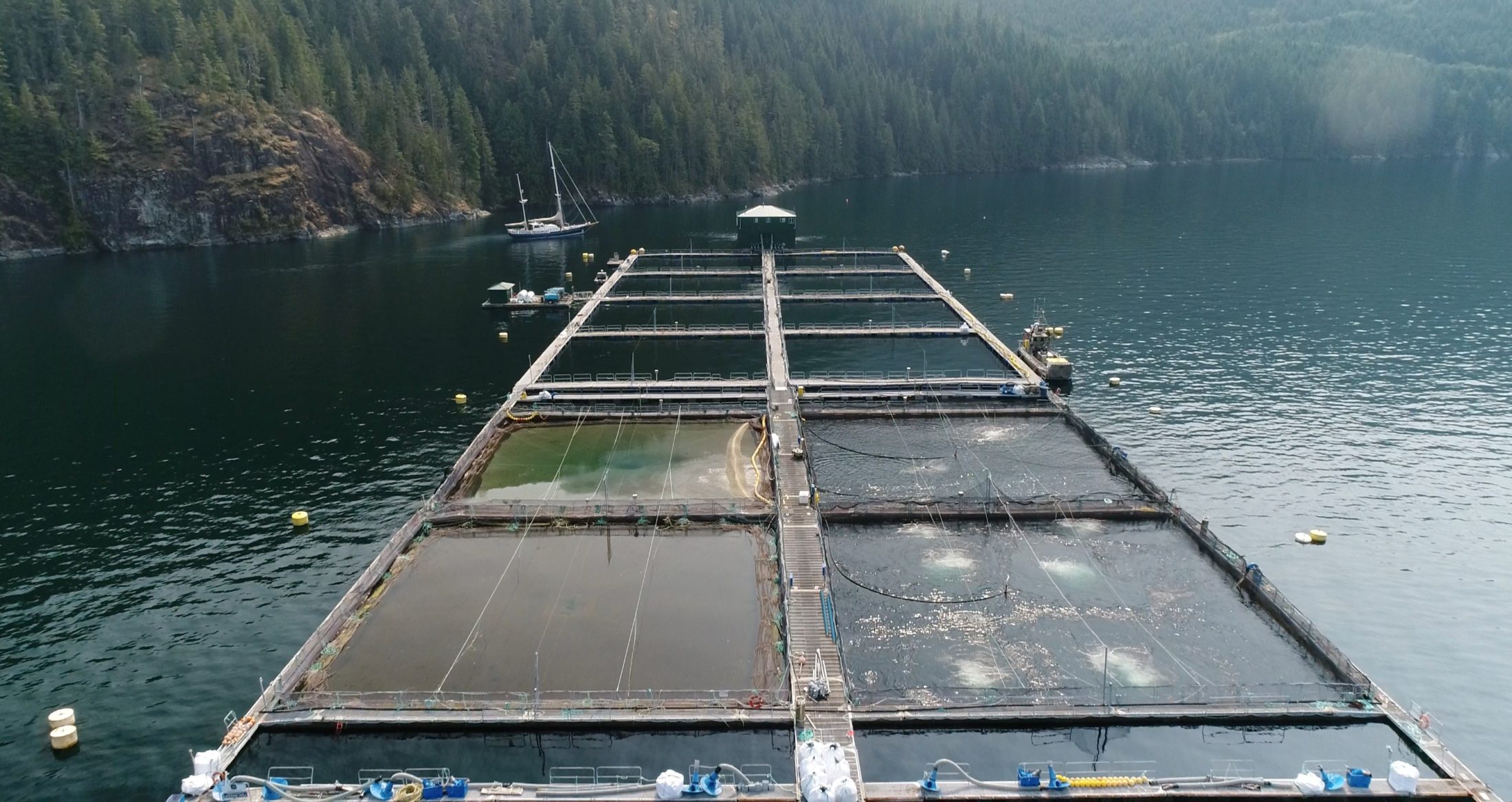 A recent study found that salmon farms in the Discovery Islands of B.C., like this one at Sonora Point, have a rate of sea lice infection of 94 per cent. Photo: Tavish Campbell

The report, released by the First Nations Leadership Council in June, prompted Indigenous leaders to call for an end to all open-net pen salmon farming.

“We have known for years that open-net pen salmon farming is one of the main contributors to the massive decline in wild salmon stocks in this province,” said B.C. Assembly of First Nations Regional Chief Terry Teegee.

A major obstacle is the dual mandate of Fisheries and Oceans Canada to both protect wild salmon and promote the salmon farming industry, Godwin said.

In 2012 the $37-million Cohen Commission of Inquiry into the Decline of Sockeye Salmon in the Fraser River recommended that the two mandates should be separated because of inherent conflict of interest, but no action has been taken.

Another Cohen Commission recommendation, now being watched closely, is the Sept. 30 deadline for prohibiting net-pen salmon farming in the Discovery Islands unless the Fisheries Minister is satisfied that the farms pose “at most a minimal risk of serious harm to the health of migrating Fraser River sockeye salmon.”

Orr suspects that, despite the federal government’s assertion that they have acted on all the Cohen recommendations, farms will not be moved from the Discovery Islands.

“They’ve been very much promoting the industry for a long time,” he said.

Fisheries and Oceans Canada said in a statement that a formal risk assessment process has been created to look at the transfer of pathogens from farmed Atlantic salmon in the Discovery Islands to Fraser River sockeye. The last of nine assessments is scheduled for mid-September and “the science advice to date has concluded that pathogens from aquaculture farms pose no more than a minimal risk to the abundance and diversity of Fraser River sockeye salmon.”

Carbon and caribou: why the Dene Tha’ are forging a plan to protect a northern Alberta lake

The nation is proposing the first Indigenous Protected and Conserved Area in the province to...

A growing chorus of voices says the government’s decision to green light old-growth cutblocks in...

Trans Mountain, a Canadian government-owned pipeline and energy company, says it is investigating allegations that...