‘Be prepared to be surprised’: What’s next for the Site C dam?

Treaty 8 First Nations are bracing themselves for the impending destruction of traditional hunting grounds and other areas of special cultural significance following last week’s denial of an injunction application to stop work on the Site C dam on B.C.’s Peace River.

BC Hydro has said 13 areas of cultural importance for the Dunne-Za nations — including prime moose habitat, a rare old-growth white spruce and trembling aspen forest and two wetlands called Sucker Lake and Trappers Lake — will be clear cut and bulldozed as early as the beginning of November.

“It’s cultural genocide,” said Roland Willson, chief of West Moberly First Nations. “Our culture is being on the land. We’re people of the land and without the land we are no longer Dunne-Za people.”

“They took us from being on the land to putting us on reserves and corralling us into these areas. We can’t sustain the way of life that was promised to us…They’ve poisoned the fish, they’ve wiped out the caribou, the moose are in trouble.”

He said the Dunne-Za people, whose traditional territory in B.C.’s northeast has already been fractured by industrial development, should be listed under the federal Species at Risk Act like southern mountain caribou.

“All of our critical habitat zones are going to be gone. Pretty soon you’re only going to see the Dunne-Za Indians in magazines.”

B.C. Supreme Court Justice Warren Milman agreed with West Moberly First Nations that there is a “serious issue to be tried” and a risk of “irreparable harm” being suffered prior to trial, but the judge ruled that more serious harm would be sustained by BC Hydro and the B.C. government if the $10.7 billion project were halted.

Blueberry River and the death by a thousand cuts

In the end, the decision largely came down to a legal term called the “balance of convenience” — an analysis of the costs and benefits of either continuing with an industrial project or halting it.

Courts almost always give economic issues greater weight than Indigenous rights or environmental issues, according to Indigenous law expert John Borrows, who told The Narwhal in January that the “deck is stacked against First Nations” in injunction hearings.

“I think this is just an illustration of that pattern repeating itself,” Borrows said Monday in an interview.

Site C treaty rights violation yet to be tested in court

The question of whether the Site C dam violates treaty rights has never been tested in the courts.

Milman’s order raises the possibility that the project — whose cost has jumped from $6.6 billion to $7.9 billion to $8.8 billion to last December’s price tag of $10.7 billion — could be halted at the eleventh hour, leaving BC Hydro with a stranded asset.

“It’s clearly disappointing that the courts wouldn’t stop the work now,” Thielmann told The Narwhal, noting that the judge has “at least preserved the possibility of a permanent injunction.”

Borrows, a Canada Research Chair in Indigenous Law at UVic’s law school, also pointed to the Trans Mountain pipeline decision, noting that substantial amounts of public money could be spent on the Site C project and “you might not be able to proceed with the development.”

“The honour of the Crown wasn’t fulfilled” in the TransMountain pipeline case, Borrows said, and  taxpayers are “stranded high and dry because the Crown hasn’t done the proper work to reconcile itself with Aboriginal rights.”

“Who knows what a final court will say as to whether or not the Crown has been honourable in the way that they’ve approached the [Site C project] treaty right?”

Willson said even if the First Nations win their treaty rights case “the dam is going to be pretty much built” by 2023.

He questioned how any amount of financial compensation could make up for the loss of the Peace River Valley, the last relatively intact stretch of the valley still available to Treaty 8 nations for traditional practices guaranteed to them in a treaty their ancestors signed in 1899.

Grand Chief Stewart Phillip, president of the Union of B.C Indian Chiefs (UBCIC), called the injunction ruling “yet another grave disappointment to the Treaty 8 First Nations, who have been betrayed, let down and lied to by the provincial government.”

“What will it mean for the treaty case to be heard when such a fragile environment has already been razed to the ground by bulldozers and chainsaws?” Phillip asked in a statement.

In August, Phillips and other members of the UBCIC executive took the unusual step of writing an open letter to Premier John Horgan denouncing legal arguments made by BC Hydro during the injunction application legal case as a form of “neo-colonization” and demanding a formal apology.

The executive received a form letter in response.

The Site C project will poison bull trout and other Peace River fish with methylmercury and destroy Indigenous burial grounds and spiritual areas, including at Cache Creek where First Nations have pushed back against BC Hydro’s plans to reroute a provincial highway next to an active sweat lodge and grave sites.

Also on the Site C project chopping block is what Willson described as the “best moose habitat in all of British Columbia,” habitat for more than 100 species vulnerable to extinction and ancient wetlands called tufa seeps, rare ecosystems that cannot be recreated.

In his ruling, the judge wrote that he did not believe West Moberly First Nations and Prophet River First Nation were likely to win their civil case.

“West Moberly’s chances of ultimately succeeding with it and halting the project permanently are not strong,” Milman said as part of his rationale for refusing the injunction.

But Borrows said he believes the two nations have a “strong” treaty rights case. 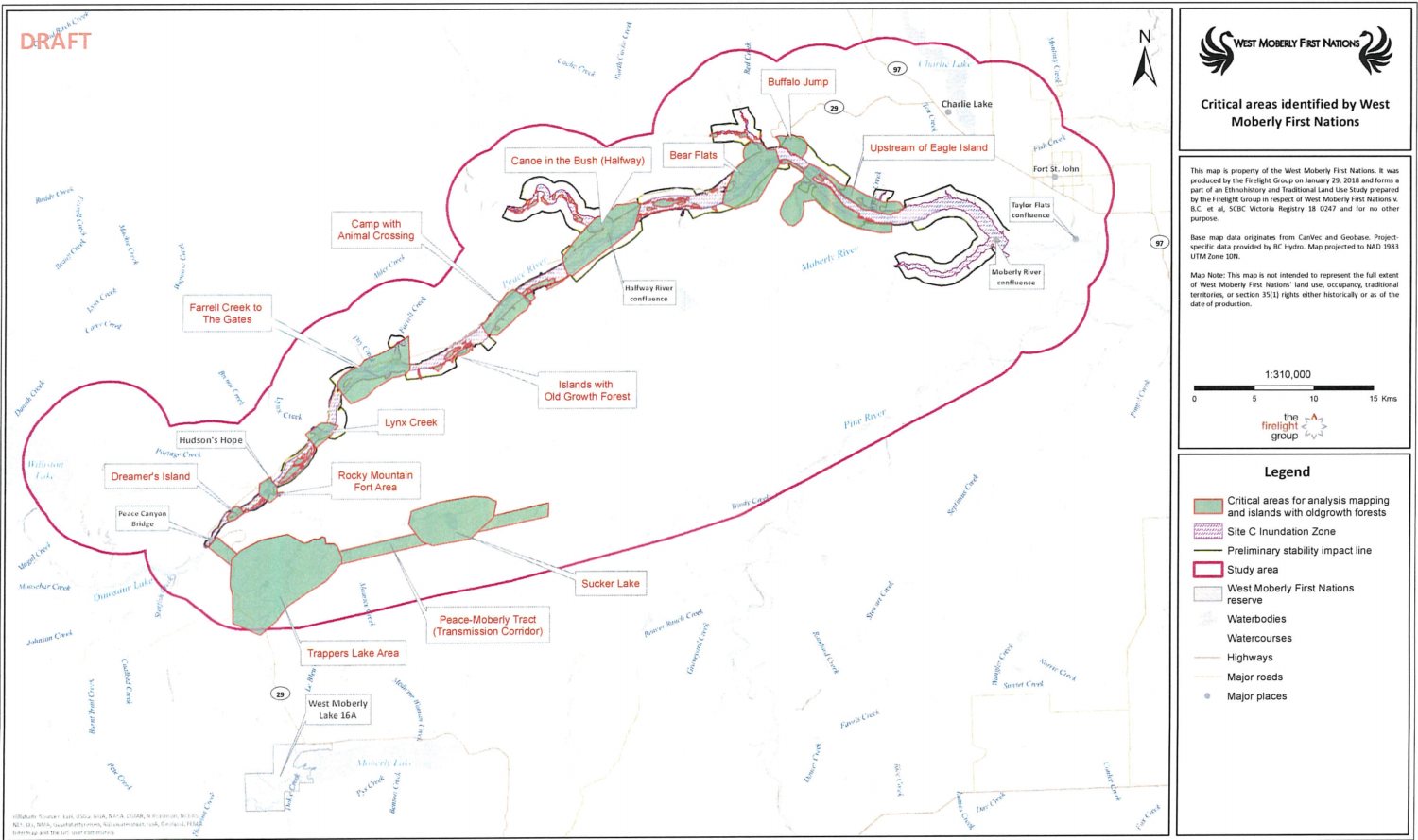 A map of critical cultural areas identified by the West Moberly First Nation in their injunction application.

“There has been a recognition of aboriginal and treaty rights in courts through the past 25 years that have often surprised people and I think, in this area, be prepared to be surprised.”

Thielmann also said he is not unduly worried about Milman’s current viewpoint concerning the odds of success at trial.

“He is saying there are a number of challenges because of the complex legal issues and they require a full trial to get to the bottom of them,” Thielmann said.

That is true for almost every Indigenous claim because Canadian case law was developed in a colonial context without recognition of these rights, Thielmann pointed out.

Despite the general recognition afforded to Aboriginal and treaty rights by the 1982 Constitution Act, Thielmann said there are relatively few precedents that demonstrate “how courts should translate this recognition into meaningful protection for Indigenous rights.”

That’s because the judiciary is reluctant to second guess the policy decisions of Crown actors or to impact the interests of third parties, he noted.

“The odds are against virtually every Indigenous claimant that goes to court because the legal precedent tends to start from a position that is not in their favour, so certainly there will be challenges ahead.”

Thielmann said Milman’s openness to the prospect of terminating the Site C project before the valley is inundated demonstrates that he is willing to seriously consider “those difficult legal issues.”

“We understand why he would want to hear directly from West Moberly members in trial before resolving complex factual disputes.”

Borrows said legal scholars will be watching the full civil trial with interest.

He zeroed in on a clause in Treaty 8 known as the “taking up” clause as a key point of interest, noting that the clause is “almost on a collision course with itself.”

That clause says Indigenous people have the right to hunt and fish on lands that can be taken up for Crown purposes.

“But if so much land is being taken up for Crown purposes that you can no longer exercise your right to hunt and fish, what does that mean?” Borrows asked.

Borrows questioned if taking up all that land defeats “the very purpose of the clause, which was to ensure that people could continue their traditional lifestyles. And if that occurs it would seem to be that the treaty promise would be violated on the part of the Crown.”

In August 2017, the United Nations Committee for the Elimination of Racial Discrimination asked the B.C. and federal governments to halt work on the Site C so that a full review could be conducted in collaboration with Indigenous Peoples to “identify alternatives to the irreversible destruction of Indigenous lands.”

Not only was that request ignored by both governments but the federal government missed an August 2018 deadline for reporting back on progress.

“The whole thing’s been a sham from the beginning,” he said. “The power’s not needed. It was a political decision.”

— With files from Judith Lavoie

Banner: West Moberly Chief Roland Willson. Photo: Jayce Hawkins / The Narwhal
We hear it time and time again:
“These are the stories that need to be told and you are some of the only ones telling them,” John, a new member of The Narwhal, wrote in to say.