‘Beyond what our instruments can tell us’: merging Indigenous knowledge and Western science at the edge of the world

Residents of remote Tuktoyaktuk — which may become the first community in Canada to relocate due to coastal erosion and sea level rise — are taking climate data gathering into their own hands
By Weronika Murray
Share
Charlotte Irish, Tuktoyaktuk's monitoring program coordinator, assists Paul Mann from Northumbria University with gas sampling in a permafrost slump on Hooper Island. The samples can provide insight into concentrations of greenhouse gases released by thawing permafrost. Photo: Weronika Murray / The Narwhal

“First, we are going to check out the berries,” Obie David James Anikina says.

It’s a warm, buggy day out on the tundra about 10 kilometres outside of Tuktoyaktuk in the Northwest Territories. The height of summer brings a lush green to these parts.

I follow Anikina and Eriel Lugt through knee-high shrubbery and after a short walk we arrive at a marked blueberry patch.

Eriel pulls out an iPad and a camera, takes notes and a few photos, before we move on to known patches of cloudberries. Then to wild rhubarb.

Climate monitor Eriel Lugt measures the height of wild rhubarb. The information she collects will provide insight into the effect climate change is having on edible plants around Tuktoyaktuk. Photo: Weronika Murray / The Narwhal

The project, currently funded by Crown-Indigenous Relations and Northern Affairs Canada, is an inter-agency effort to establish a community-based monitoring program that would allow for long term, continuous measurements of climate change indicators.

That’s where the berries come in. The warming climate is moving ecological borders, changing and endangering unique plant life in the tundra.

The monitoring program is a method of monitoring the easily overlooked ways the world is being altered by a new climate reality.

But it’s also designed to act as a knowledge-sharing platform in which Western science-based research and traditional knowledge can compliment each other. Community participation is built into the program to ensure the needs and values of local Indigenous people are recognized and integrated in the monitoring and field work.

Gathering ‘quantitative data’ might sound like a dry, technical endeavour. But when it’s done to measure ice thickness, the days of the month when ice forms or thaws, the turbidity of water, permafrost depth and the leaf and bloom dates of edible plants, it amounts to work that for remote northern communities can touch on pressing issues of life and death.

On a regular basis, eight monitors armed with technical training through the Aurora Research Institute in Inuvik head out to gather data. They also join up with visiting researchers to broaden their fieldwork experience and learn new skills.

Tuktoyaktuk, an Inuvialuit community of about 950 people, may become the first community in Canada to face the possibility of relocation due to the impact of global warming. Already known as a place at the edge of the world, areas of Tuktoyaktuk are at risk of disappearing altogether.

According to a report from W.F. Baird & Associates Coastal Engineers, more than half of the north end of Tuktoyaktuk Peninsula, locally known as “The Point,” is expected to be gone by the end of the century.

The vanishing point: life on the edge of the melting world

Despite valiant efforts to protect the shore from erosion over the last few decades, the ocean keeps advancing inland due to climate change driven factors like a shorter ice season, rising sea levels and permafrost thaw.

That, combined with the rising sea level, puts Tuktoyaktuk at risk of flooding, especially during storms.

“Coastal erosion gets all the press because it makes for dramatic photos. But flooding is just as big of a problem,” says Dustin Whalen, physical scientist with Natural Resources Canada who has been conducting research in the community for over a decade.

A storm batters the windward shore of “The Point,” an area of Tuktoyaktuk heavily affected by shore erosion. Photo: Weronika Murray / The Narwhal

While Tuktoyaktuk’s future is uncertain, its residents urgently need the ability to make well-informed decisions when considering long-term solutions. This is where the community-based climate change monitoring can really make a difference.

For Whalen, who sits on the advisory board for the Tuktoyaktuk Community Climate Resilience Project, the value of the program lies in continuous and reliable data collecting.

“Without continuous monitoring you can’t create models. We can take the data [collected by the local monitors] and help the community model how the environment is going to evolve. Research and monitoring led by the community, for the community, is an important way forward to ensure that people are better prepared to deal with the changing climate.”

How to build resilient communities in the face of a climate-disrupted reality is of increasing interest to researchers worldwide.

A storm surge enters Tuktoyaktuk harbour during the early hours of a storm on August 4, 2019. Shore erosion and flooding are the two main threats the community faces due to climate change. Weronika Murray / The Narwhal

Michael Lim from Northumbria University in Newcastle, England, has been working in Tuktoyaktuk for the past three years to study the way changing climate conditions threatens infrastructure.

He agrees that continuous monitoring can help fill the gaps in data collecting.

“As researchers we are so often on short-term funding and have such limited time to conduct studies, which has led to often piecemeal and fragmented advances,” Lim says.

“The community-based monitoring can provide a genuinely different approach with continued studies in key areas. In addition, we always gain invaluable new understanding through the wealth of local knowledge and intimate connection that Indigenous communities have with the land and its wildlife, and their approaches to cope with its changes, far beyond what our instruments can tell us.”

Monitoring program coordinator, Charlotte Irish, says her engagement with the research program has been a jarring experience.

“Seeing all the changes happening to our land amazes and terrifies me,” she says.

Prior to her work as a monitor, Irish says she wasn’t aware of the extent to which the region has already been impacted by climate change.

“Now that I’ve had opportunities to work with researchers and see what’s happening to our land, it’s something that keeps me going and makes me want to learn and see more. As a community, eventually we will have to learn how to adapt to this situation.”

There have also been unexpected benefits of the monitoring program to the community more broadly.

Climate monitor Deva-Lynn Pokiak says that getting local residents involved in the research is having a positive ripple effect.

Climate monitor Deva-Lynn Pokiak believes that getting the community involved in research can get more youth interested in science and climate change issues. Photo: Weronika Murray / The Narwhal

“I try to be a good influence around the youth. They see me working with scientists and they think it’s cool, and they also want to get involved,” Pokiak says. “It’s good to get them interested in learning.”

A growing undercut in the shoreline threatens her family’s home, which overlooks Tuktoyaktuk’s inner harbour. 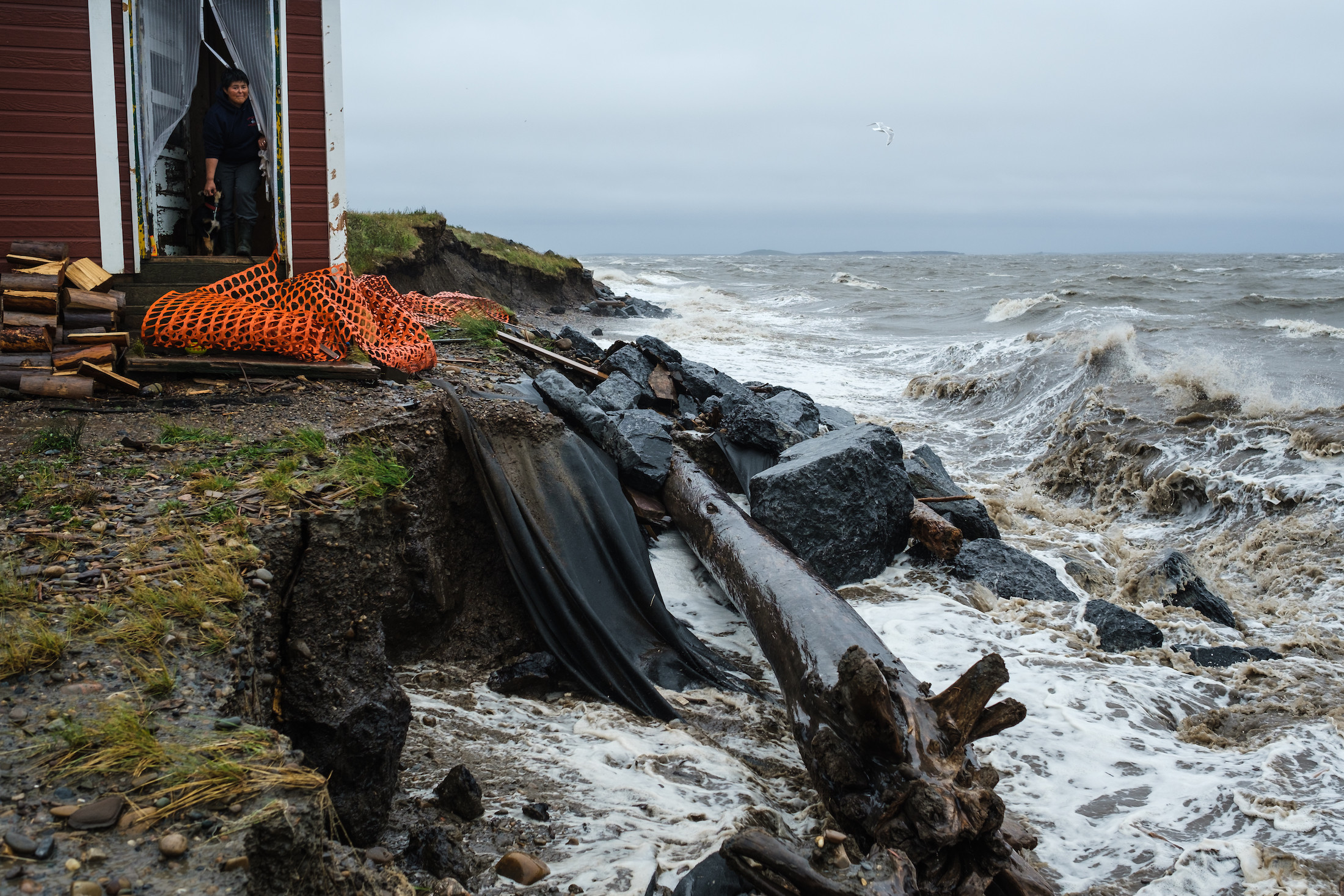 Despite numerous attempts to protect Tuktoyaktuk’s windward shore with man-made reinforcements, the community is losing ground to the destructive force of the waves. Noella Cockney’s home is one of four buildings listed for urgent relocation further inland due to progressing shore erosion. Weronika Murray / The Narwhal

Lugt says she initially signed up for the monitoring program because she thought it would be interesting to learn more about her community and the processes that affect it. But now she recognizes a more pressing need for youth to participate in local climate resiliency initiatives.

“Young people should make themselves heard more, show that we actually care, that it’s not a joke,” she says. “Get out on the land and see the changes for yourselves. We have to learn to work together because we will all have to pay the price for climate change.”

When asked about the emotional impact of facing dramatic changes in the landscape, Lugt’s mind extends to both the far past and future: “It makes me wonder what our elders would think about this. It’s sad to think that this is all going to be gone.”

The impacts of thawing permafrost on the surrounding environment aren’t yet fully known.

But other compounding environmental concerns — around ocean acidification and its effects on marine life as well as elevated concentrations of mercury in fish and wildlife — add to the pressure felt by locals.

In a community that depends on harvesting from the land for its traditional food supply, the overlapping changes point to an increasingly precarious future.

“The ocean takes longer to freeze,” Pokiak says. “It’s strange how we are having different weather than what my dad used to experience when he was my age.”

“It’s getting harder to rely on traditional knowledge because the weather has changed so much. Climate change is real and inevitable, and I hope that through my work I can make a difference for future generations.”

In a lot of ways, Tuktoyaktuk is on the front line of threats that are heading for more and more communities. The experience here is an important reminder that wherever we live, we depend on our environment to sustain us, and climate change may alter that environment and jeopardize our way of life — in ways we can anticipate and in ways we can’t.

Weronika Murray
Weronika Murray is a photographer based in Inuvik, Northwest Territories. She has worked on a wide variety of stories in the North...

Residents of Shoal Lake 40 can drink from taps thanks to a new water treatment...