The vanishing point: life on the edge of the melting world

Tuktoyaktuk is already known for being a place at the edge. But as that edge closes in, thanks to a warming climate and melting permafrost, a small peninsula known as the Point promises to disappear altogether amidst some of the most extreme coastal erosion on the planet
Share
Windward sections of the coast of Pelly Island, located about 100 kilometres northwest of Tuktoyaktuk, erode at the rate of 40 metres per year. It is one of the most extreme examples of climate-change-driven shore erosion in the world. Photo: Weronika Murray
Weronika Murray
Mar 6, 2019 10 min read

When I ask Sandy Adam how much of his property has been washed away by the Arctic Ocean, he shakes his head and says “Too much. Way too much.”

Sandy and Sarah Adam are two of the few remaining residents of the Point, a small peninsula at the end of Tuktoyaktuk’s scenic Beaufort Drive. When we sit down at the kitchen table, Sarah Adam tells me that they used to keep dogs in their backyard and she used to be able to watch them from where we are sitting now.

She points at the living room window but all we can see through it now is the Arctic Ocean. 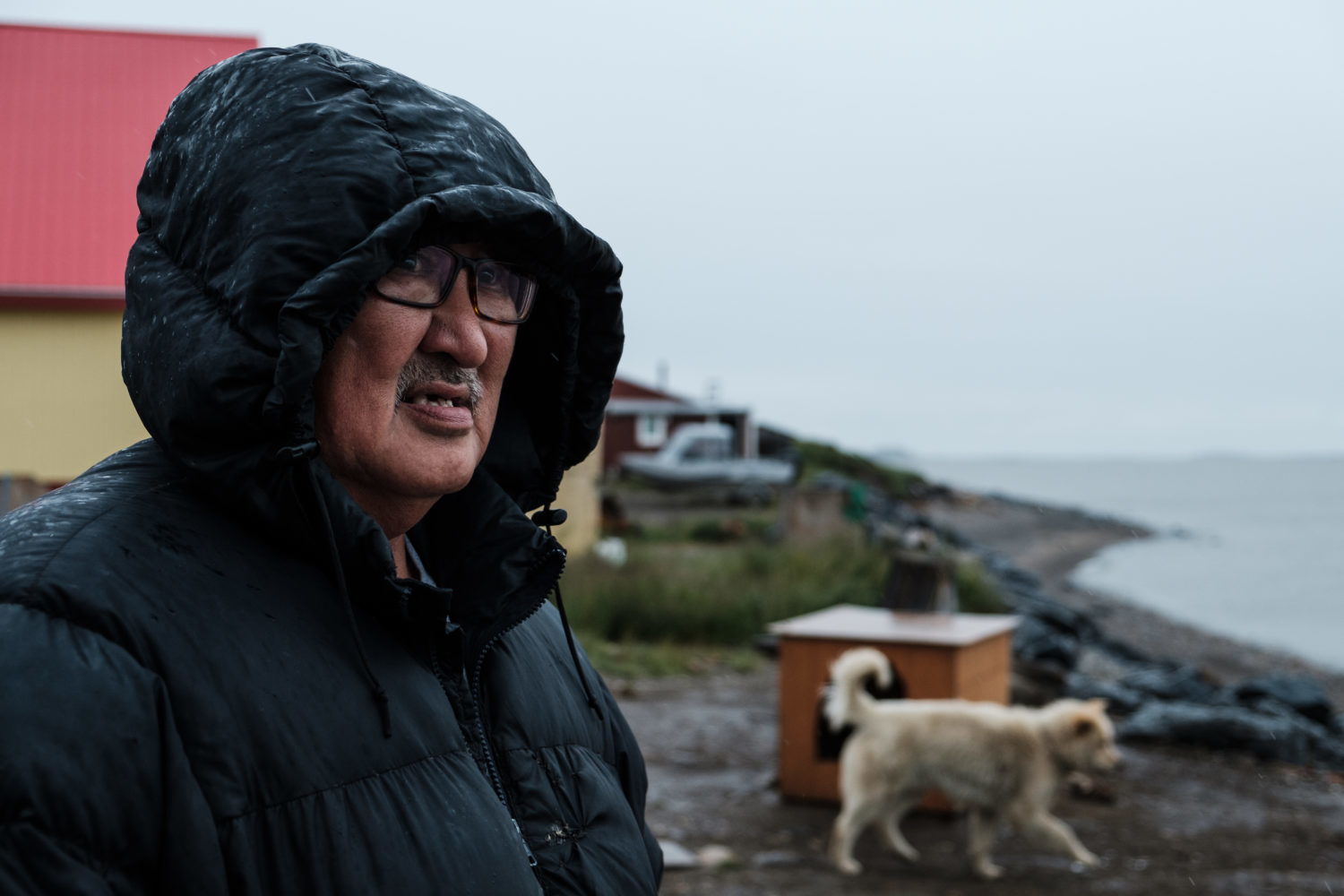 Piles of heavy boulders, known as rip-rap, is the only thing protecting Sandy Adam’s home from the destructive force of the Arctic Ocean. He says that although boulders and geotextile fabric was added to the shoreline two years ago, the reinforcement is slowly sliding down into the sea. He doesn’t allow his grandchildren to play on the rip-rap any more as boulders have become dangerously unstable. Photo: Weronika Murray

There is no back yard, no beach that used to be there back in 1994 when the Adams moved in.

I get up and walk towards the ocean facing window to see how close to the water we are. I walk all the way across the kitchen and the living room, and nearly have to press my nose against the glass to see the shore — it drops down sharply just a few feet behind the house.

Sarah Adams says that her family started to plan for relocation in 2014 but they are yet to finalize the arrangements. They hoped that the summer of 2018 would be their last one on the Point. Their home was recently assessed and deemed movable but they are still waiting for the decision on the new location. 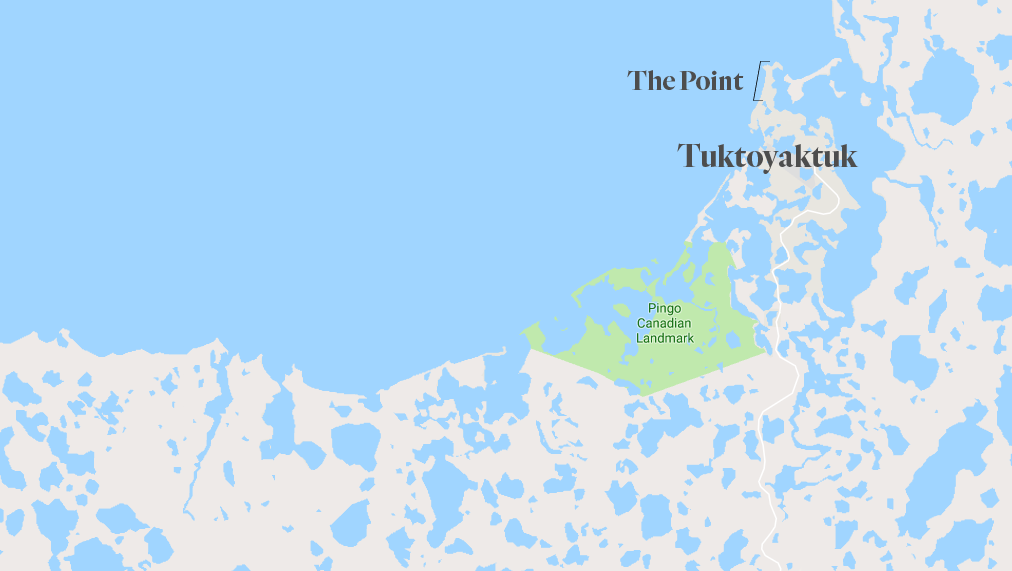 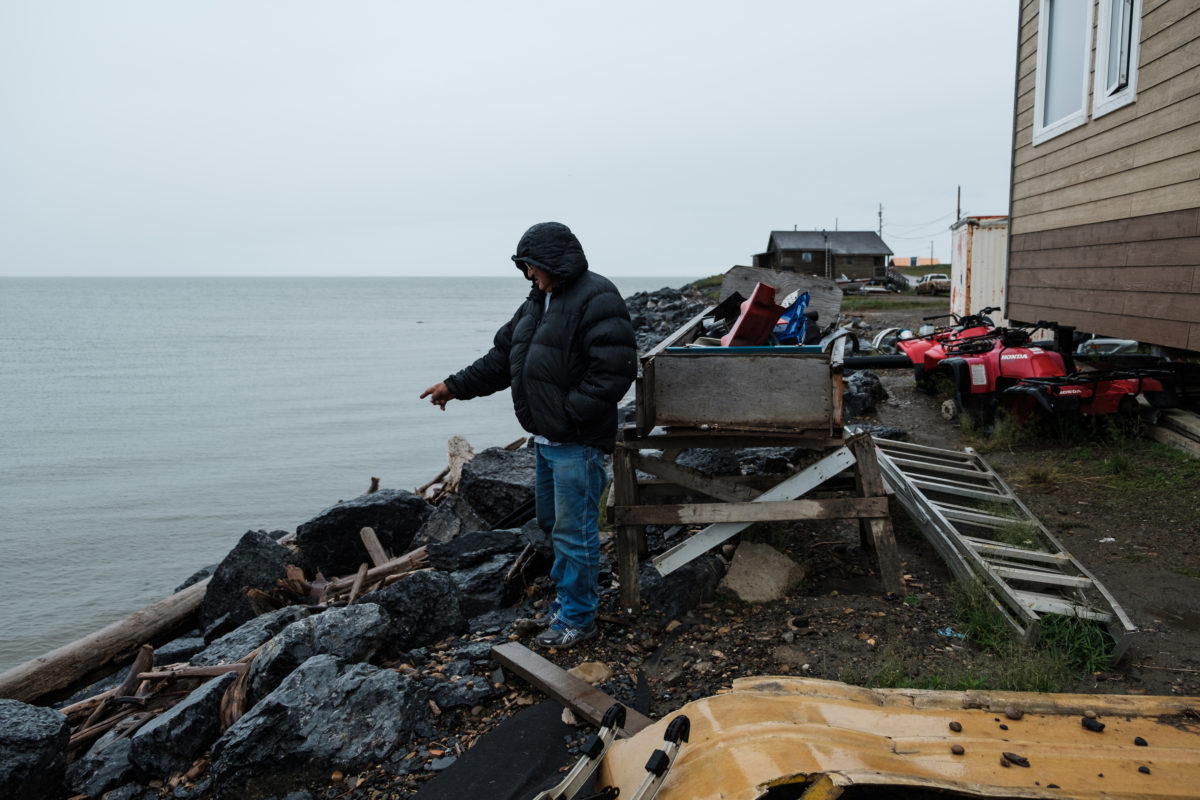 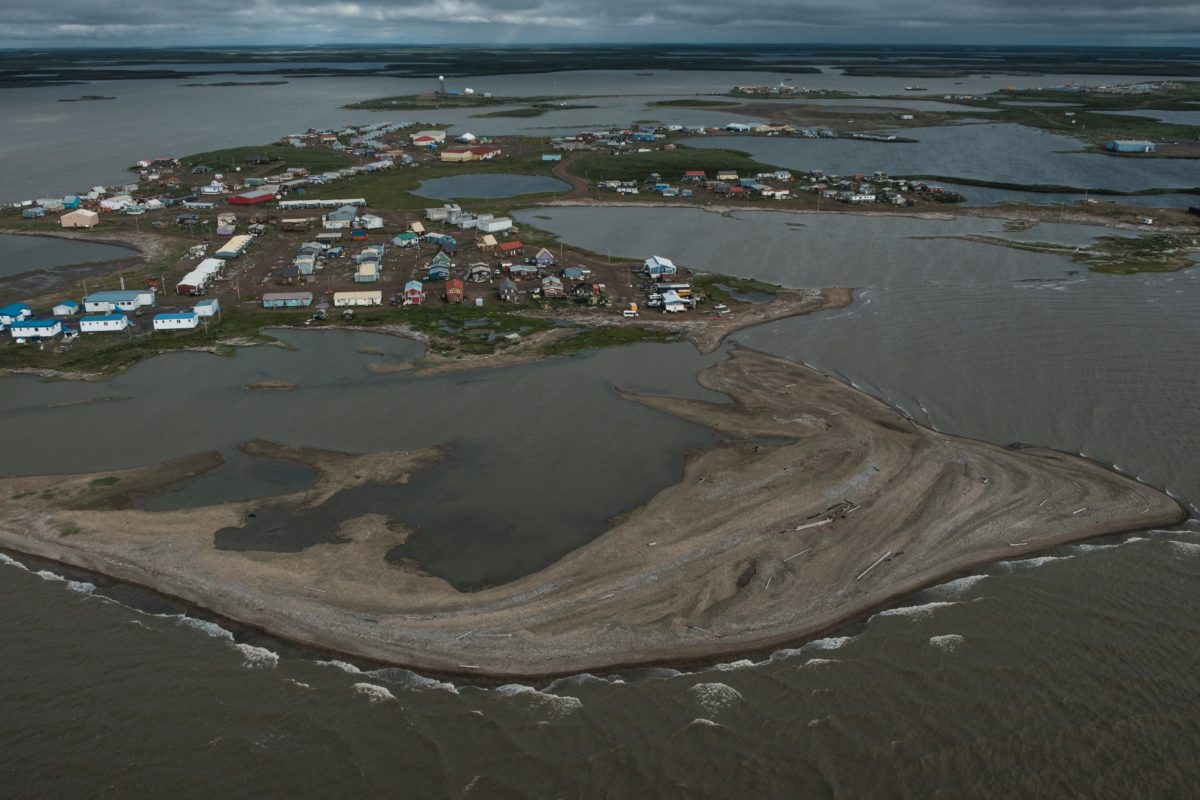 Tuktoyaktuk from the air in August, 2018. Photo: Weronika Murray

The Adams and their neighbours are being offered lots at Reindeer Point but nobody seems to be eager to move there. The area is far away from the core of the community. Sandy Adams would prefer to move the house across the Beaufort Drive, to a lot where his father’s log house used to stand but the hamlet authorities are sceptical about the idea. Despite the fact that his father’s old lot is quite far away from the shore, technically it is still at the Point.

There is no new development allowed at the Point because of the quickly progressing erosion. Once the new location is confirmed, it will require a gravel pad under the house that protects the permafrost from thawing and shifting. The pad needs to sit for at least a year to settle before any structure can be placed on top of it. 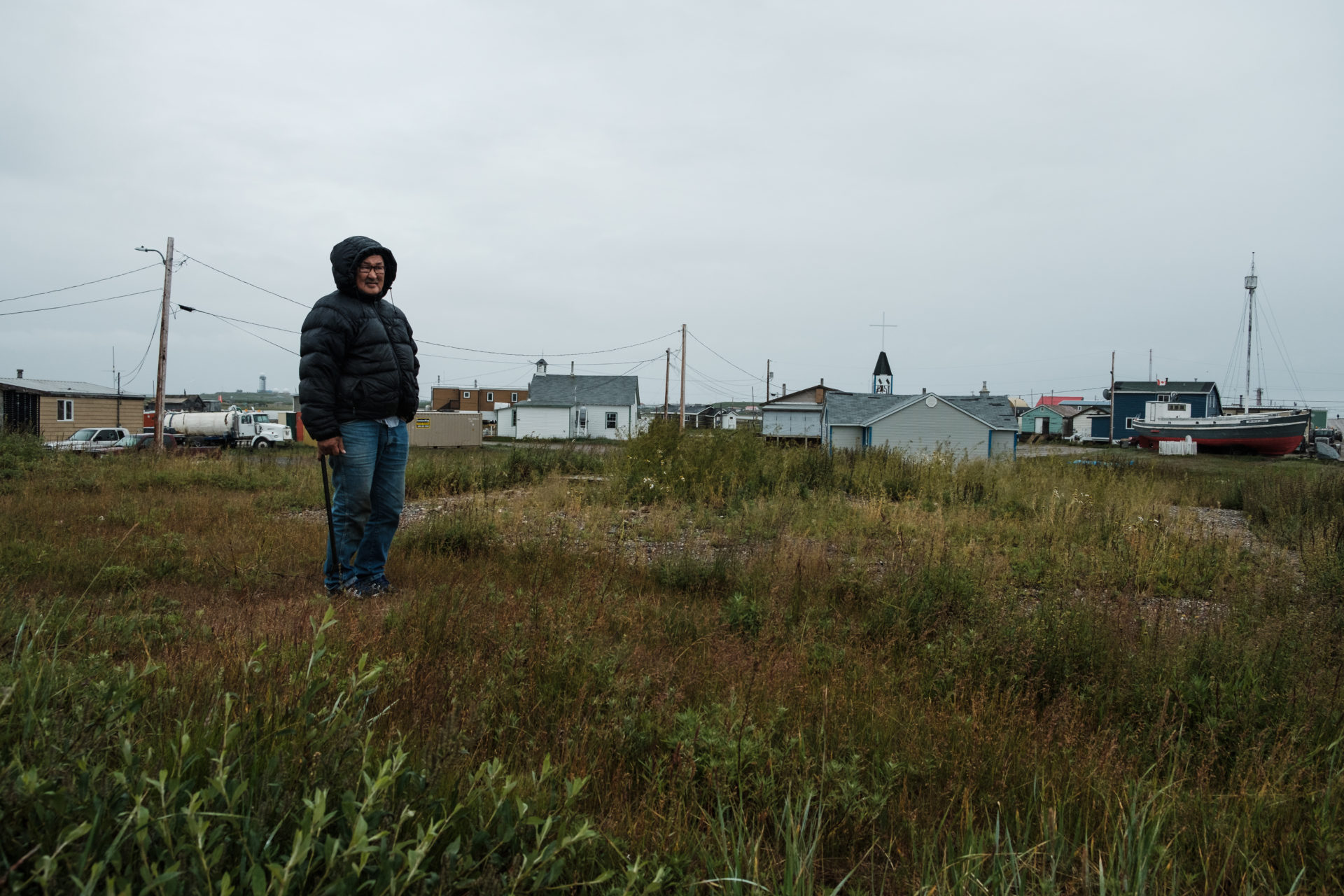 Sandy Adam stands at the lot where his father’s log house used to be, the footprint of the building still visible in the grass. Authorities won’t let Adam reclaim the land because of the unstable shoreline. The entire area of the Point, including the block furthest away from the water, is under a construction ban. Adam says he is not done fighting for permission to move his house onto his father’s lot. Photo: Weronika Murray

To make matters more complicated, the hamlet received funding to relocate the private houses from the Point but that does not include insurance in case the buildings are damaged during the move. Lucy Cockney, another resident of the Point facing relocation, is concerned that her 2-storey home with be damaged during the move over Tuktoyaktuk’s bumpy roads, and she won’t be able to afford costly repairs.

She maintains the house from her pension and does some sewing to make the ends meet. “I am an elder” she says, “what am I going to pay with for repairs, with buttons?” 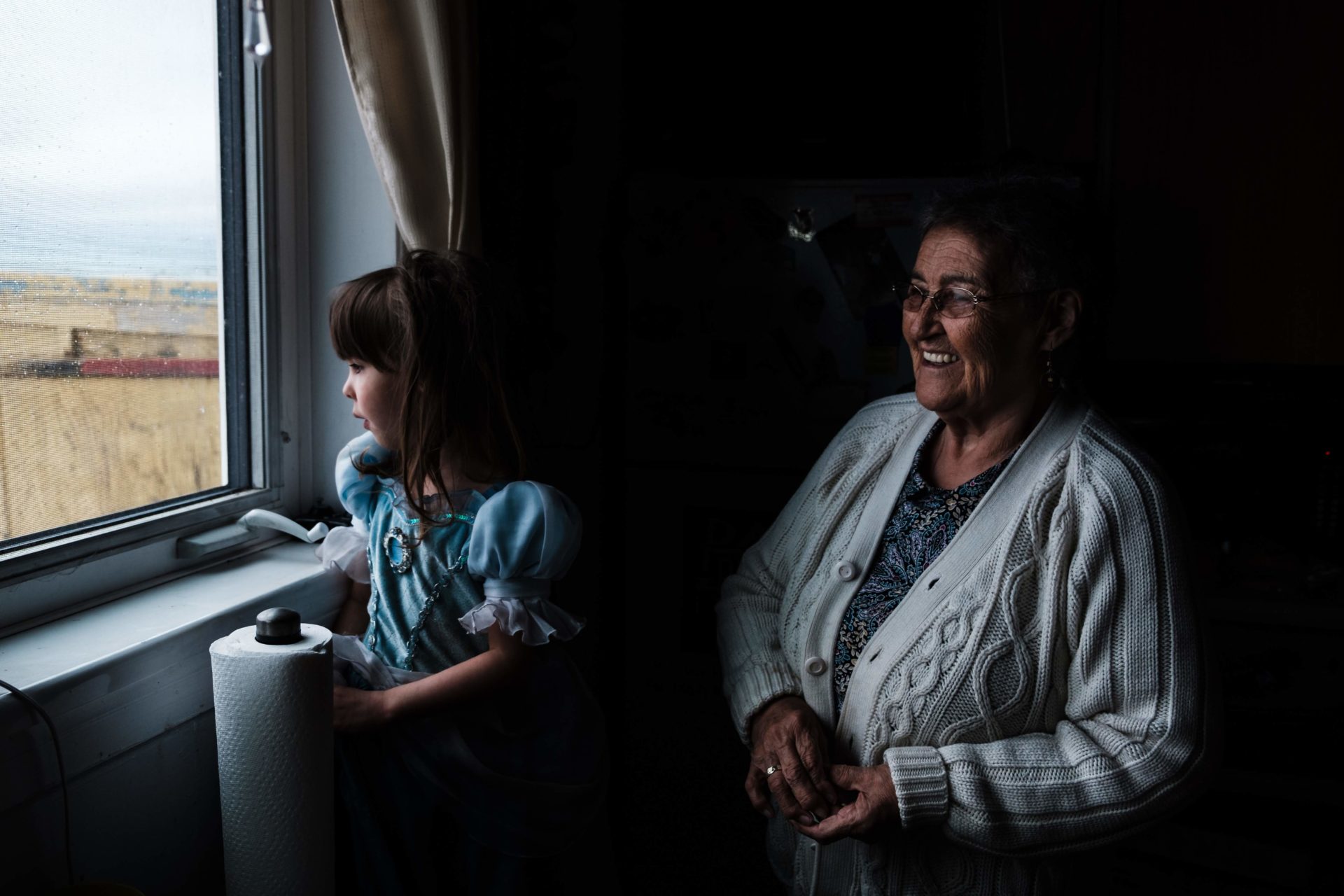 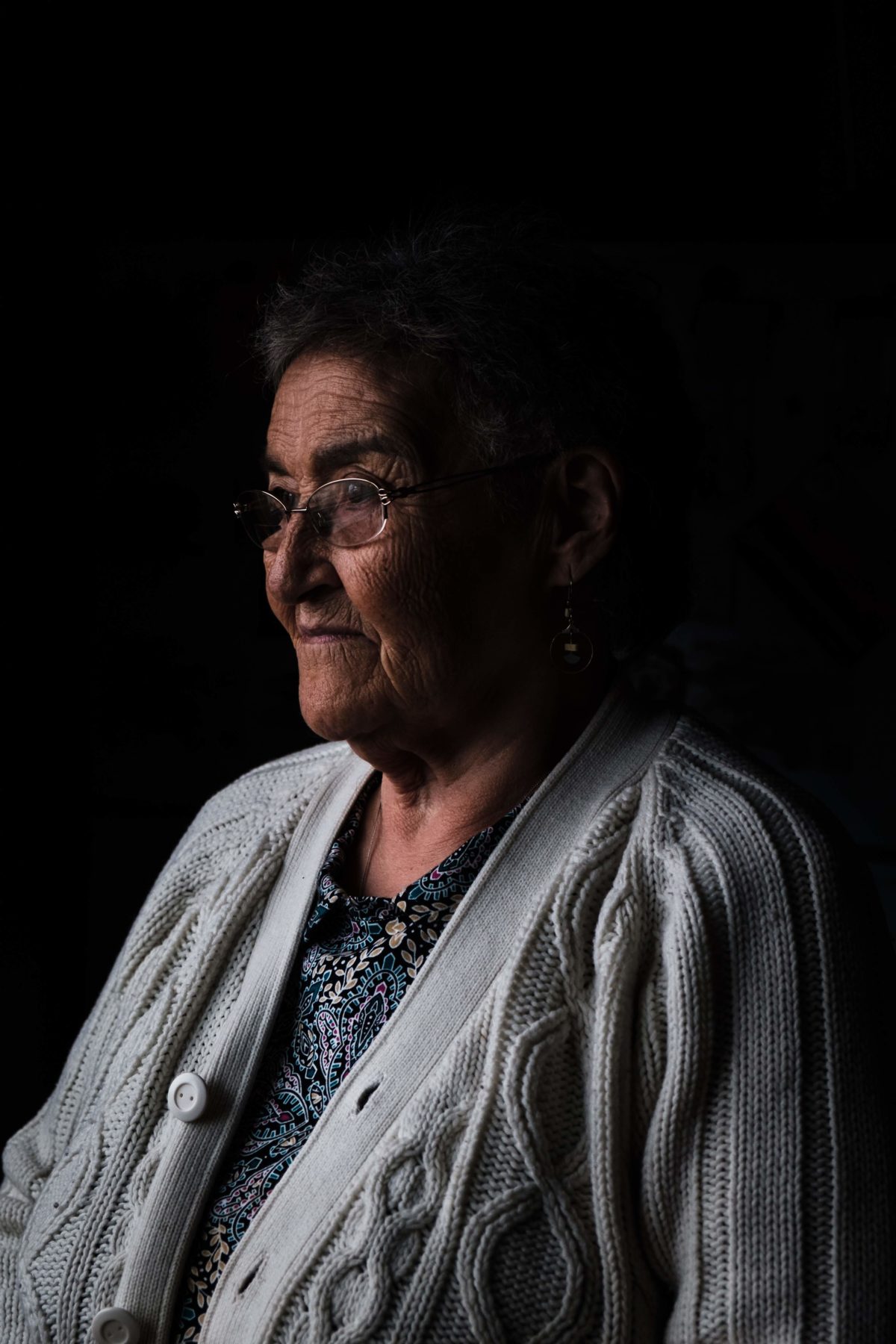 Lucy Cockney, resident of the Point, says she is concerned that she may not be able to afford the repairs if her home is damaged during the move. Photo: Weronika Murray 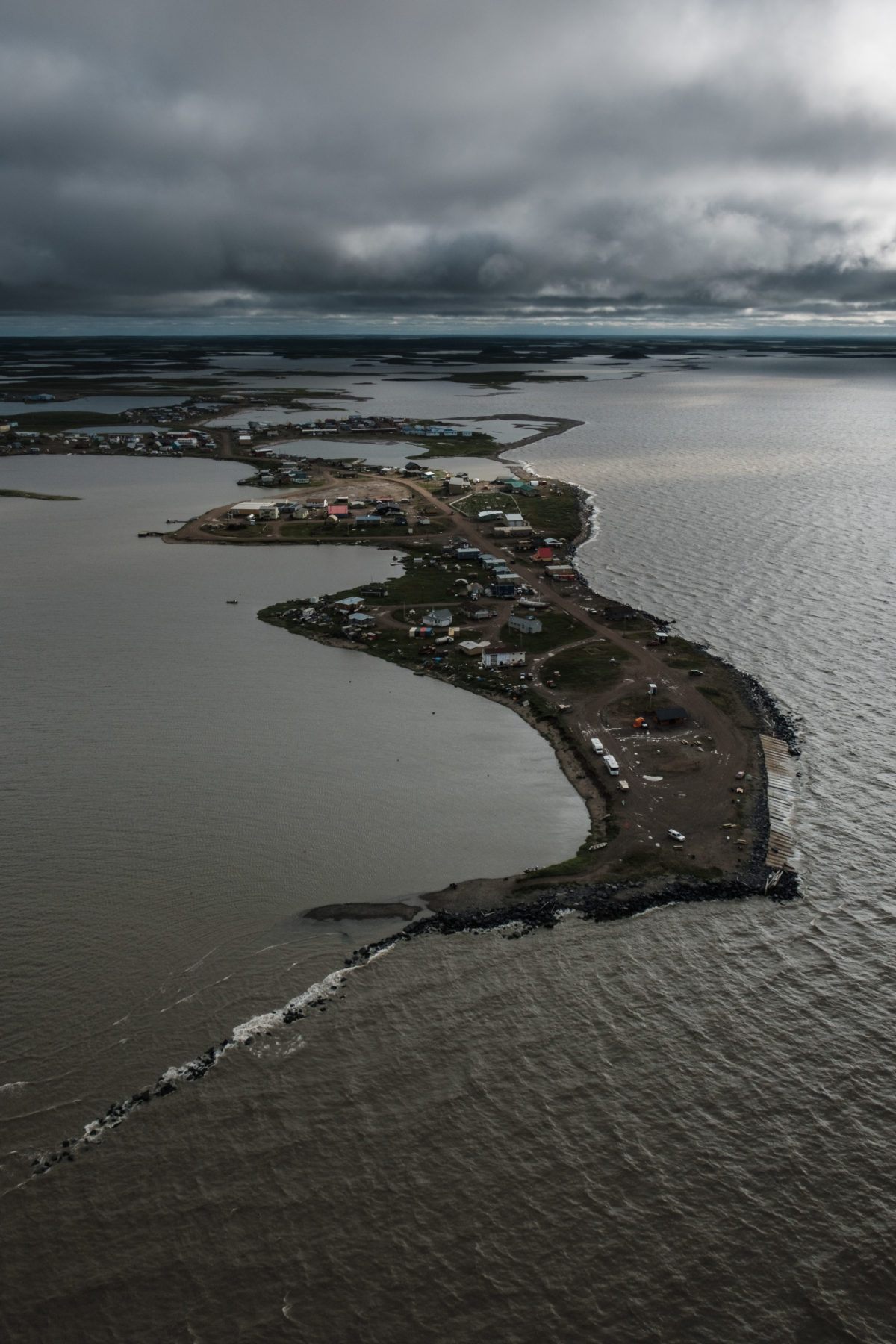 Lucy’s daughter Noella lives next door and will eventually have to move further inland as well. The new location for Lucy’s and Noella’s homes has been selected but the new lots won’t be available for a couple of years — they also require gravel pads and the time for the gravel to settle.

Noella lives in a house built by her father. The building was recently assessed for structural integrity and deemed unmovable. She was told that the hamlet authorities would move other homes first, and deal with hers at the end. She hopes that the new boulders added to the rip-rap behind her house a couple of years ago can buy her a few more years at the current location but worries that she may run out of time to salvage the family home. 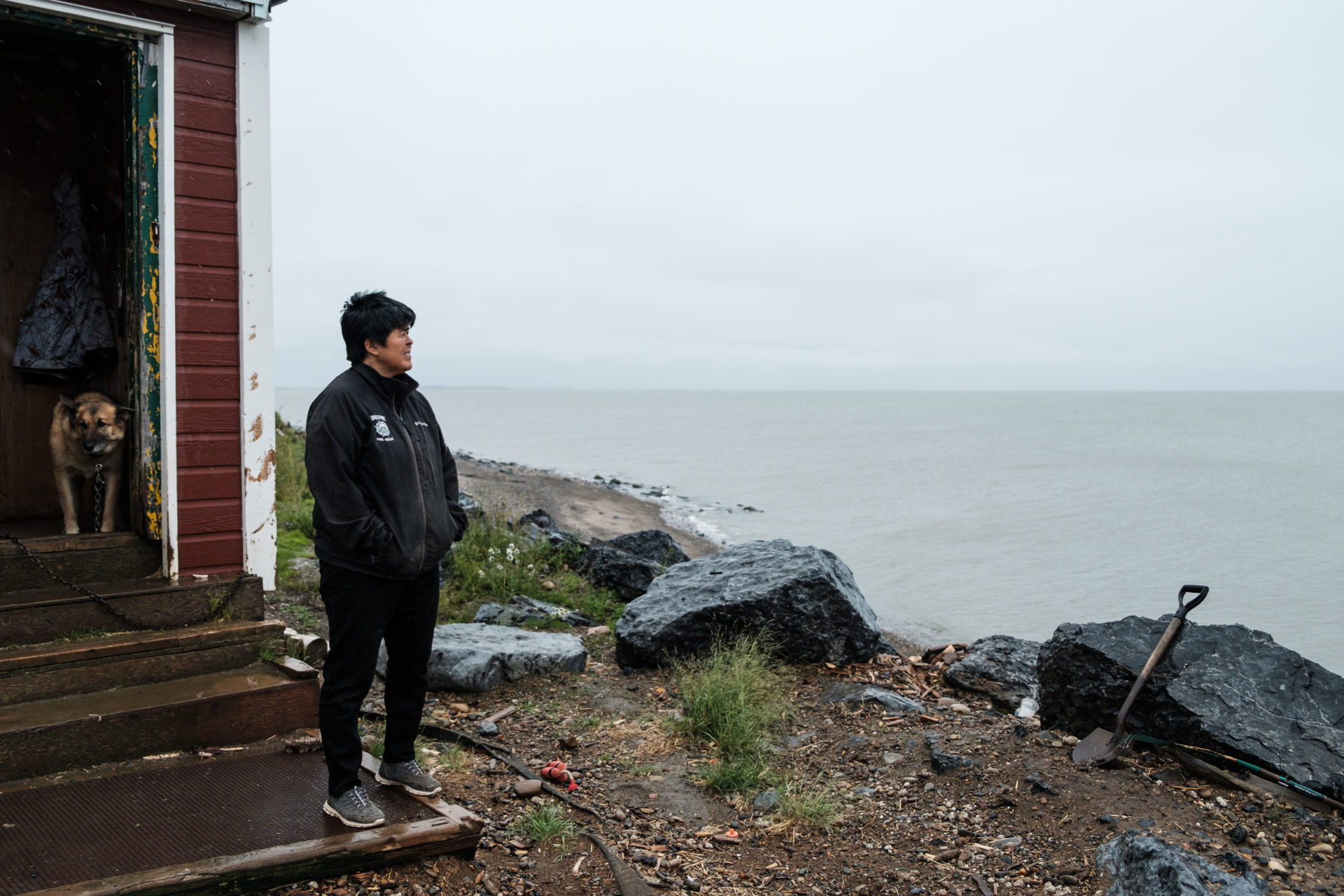 Retired RCMP officer and Tuktoyaktuk’s former fire chief Noella Cockney looks at the Arctic Ocean from the doorstep of her house. She used to be able to comfortably drive a truck behind her house. Now she can barely squeeze by with an ATV. Photo: Weronika Murray 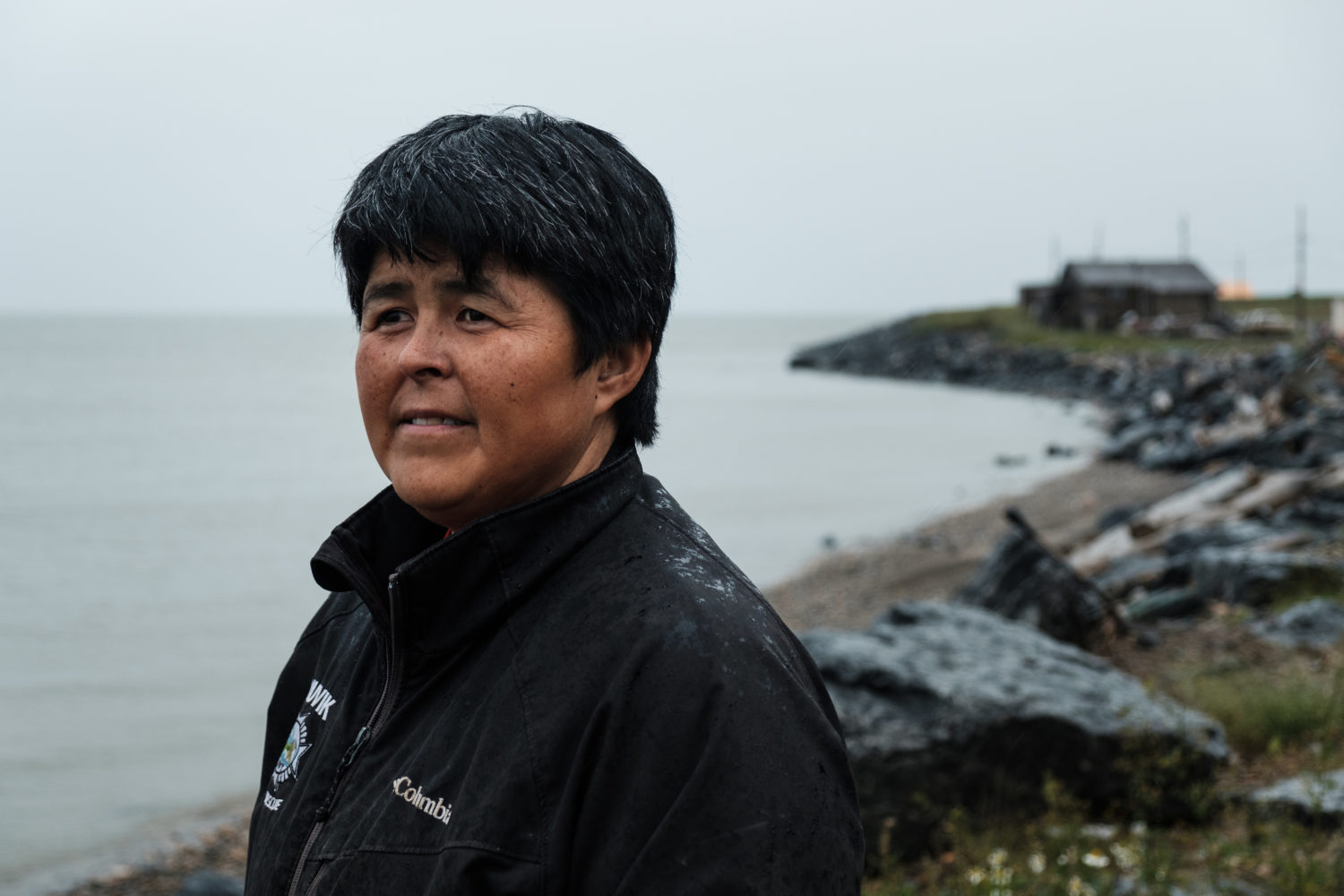 In 2013, during two storms that came within two weeks of each other, about 20 feet of Noella Cockney’s property washed away. Photo: Weronika Murray

Shore erosion is nothing new in Tuktoyaktuk, a small Inuvialuit community located just east of the mouth of the Mackenzie River delta.

What is new is the pace at which it is happening. 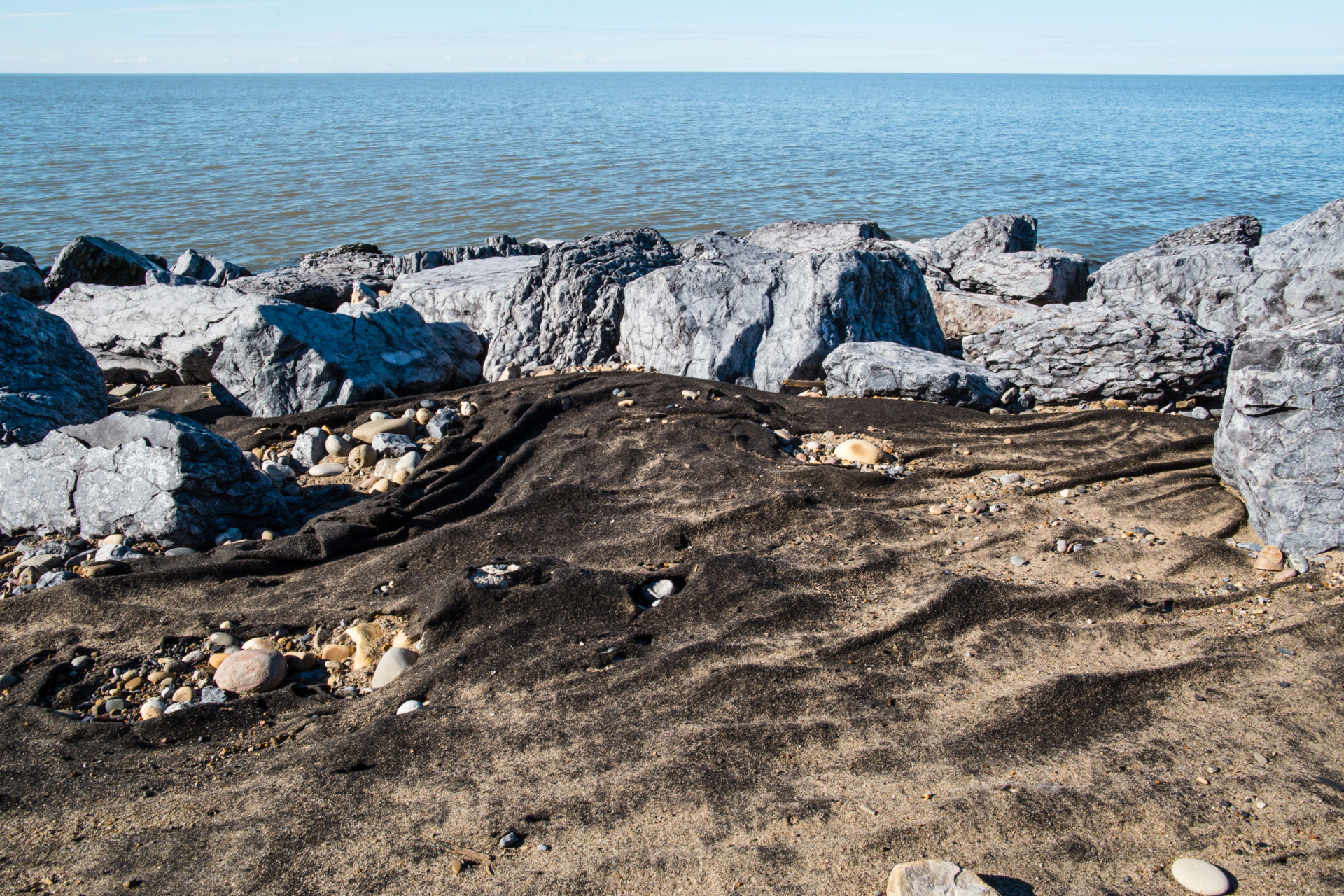 The Arctic is warming up almost twice as fast as the rest of the planet.

Several factors like thawing permafrost, shorter sea ice season, more severe storms, and rising sea level contribute to the increased rate of erosion along the Arctic coast. Moreover, the process produces massive amounts of sediment that in the long term may have negative impact on marine ecosystems along the coast. 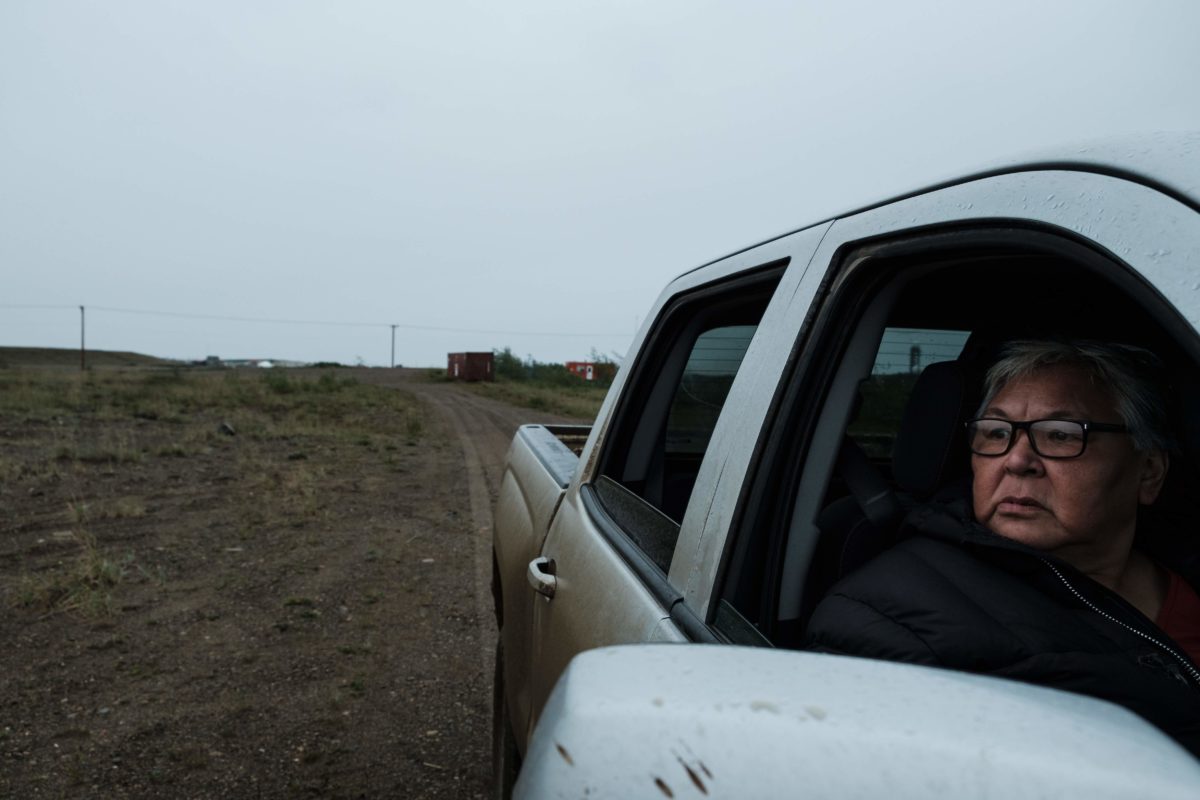 Sarah Adam looks at the lots that may be potentially available for her family to move their house to. She says that the most important thing is that the new location is safe for her grandchildren to play. Photo: Weronika Murray

Tuktoyaktuk’s harbour is the nucleus around which the community was built. It is the only Canadian sea port on the Beaufort Sea and it is well protected by Tuktoyaktuk Island, about a kilometre long spit of land with a handful of smoke houses dotted along the sandy shore.

Unfortunately, the island is also slowly washing away and at the current rate of erosion it is expected to be breached within the next 20-30 years. With the assistance of scientists form the Geological Survey of Canada the hamlet is looking into the possibility of placing an artificial barrier on the windward side of Tuktoyaktuk Island in order to protect it from the waves. 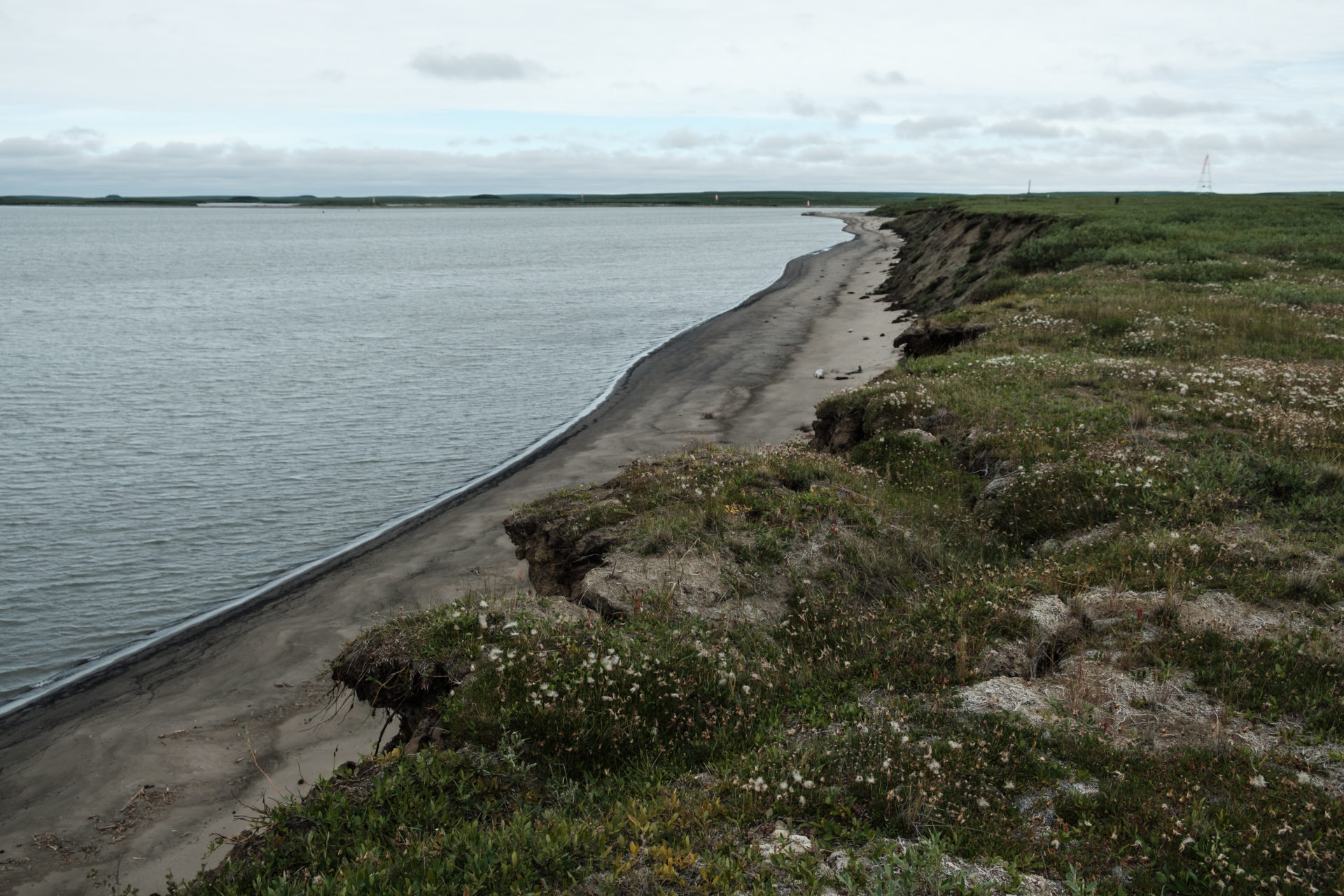 Eroding cliff on the windward side of Tuktoyaktuk Island, the natural barrier that protects Tuktoyaktuk’s harbour from the destructive force of the Arctic Ocean. Photo: Weronika Murray 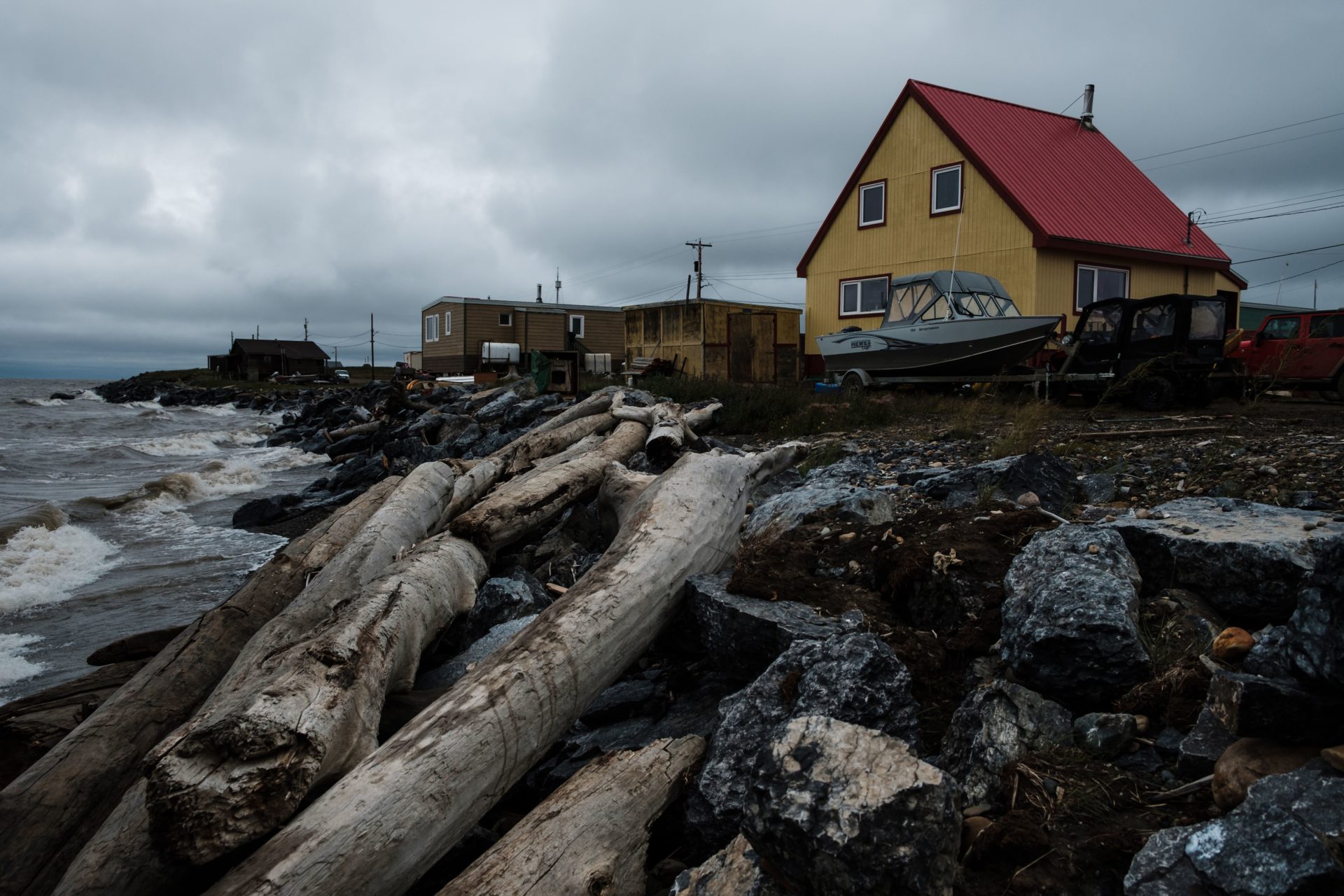 Few buildings still standing on on the Point. The yellow house with red roof belongs to Lucy Cockney. Two old log houses and a stretch of beach used to separate Lucy’s home and the ocean. Photo: Weronika Murray

Introducing artificial barriers has been a common and effective strategy in many coastal communities all over the world, says Dustin Whalen, a scientist with Natural Resources Canada, who has been conducting coastal research in the area for the last 15 years. 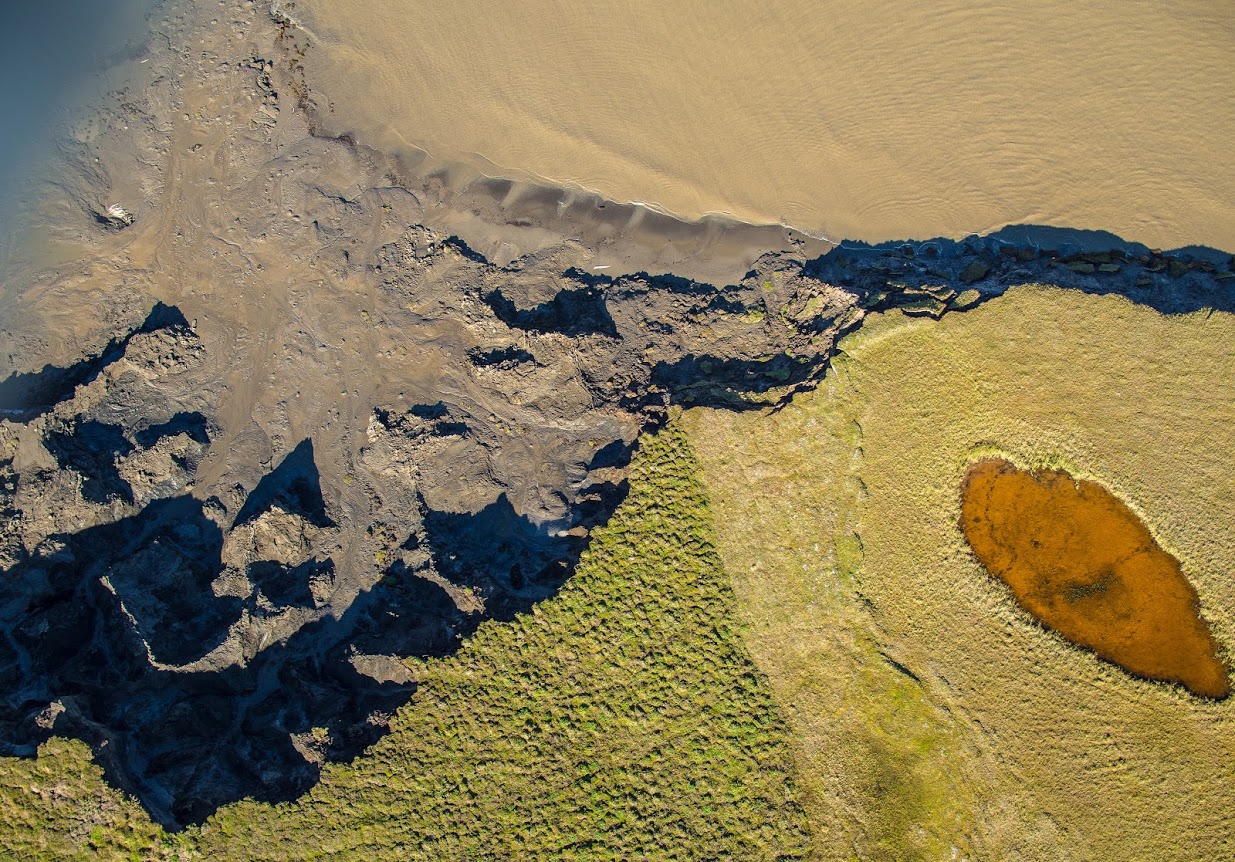 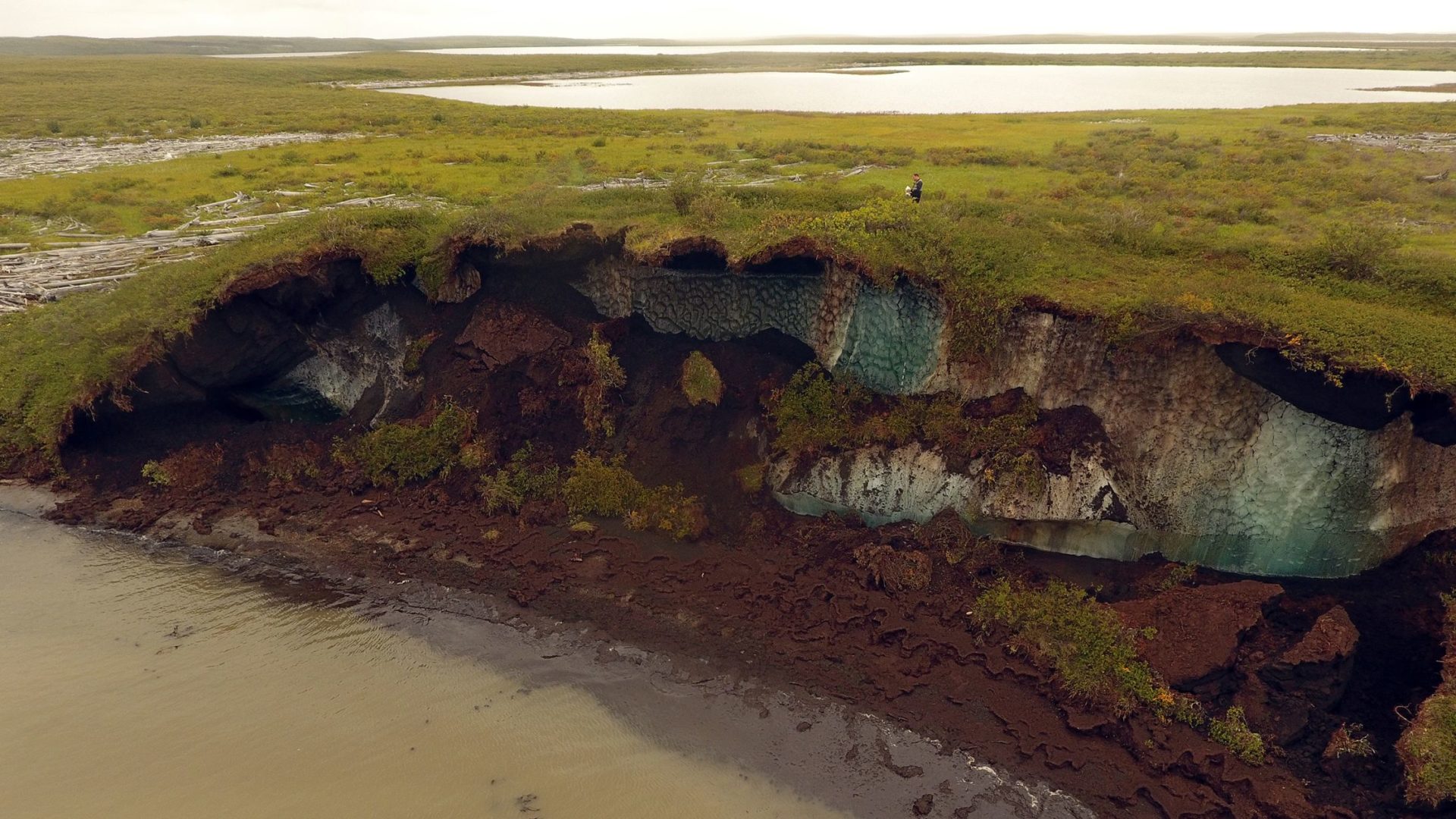 An eroding pingo, west of Tuktoyaktuk. Pingos, mounds of earth-covered ice, are evidence of former glaciers and can only exist in permafrost environments. Photo: Roger MacLeod / Natural Resources Canada 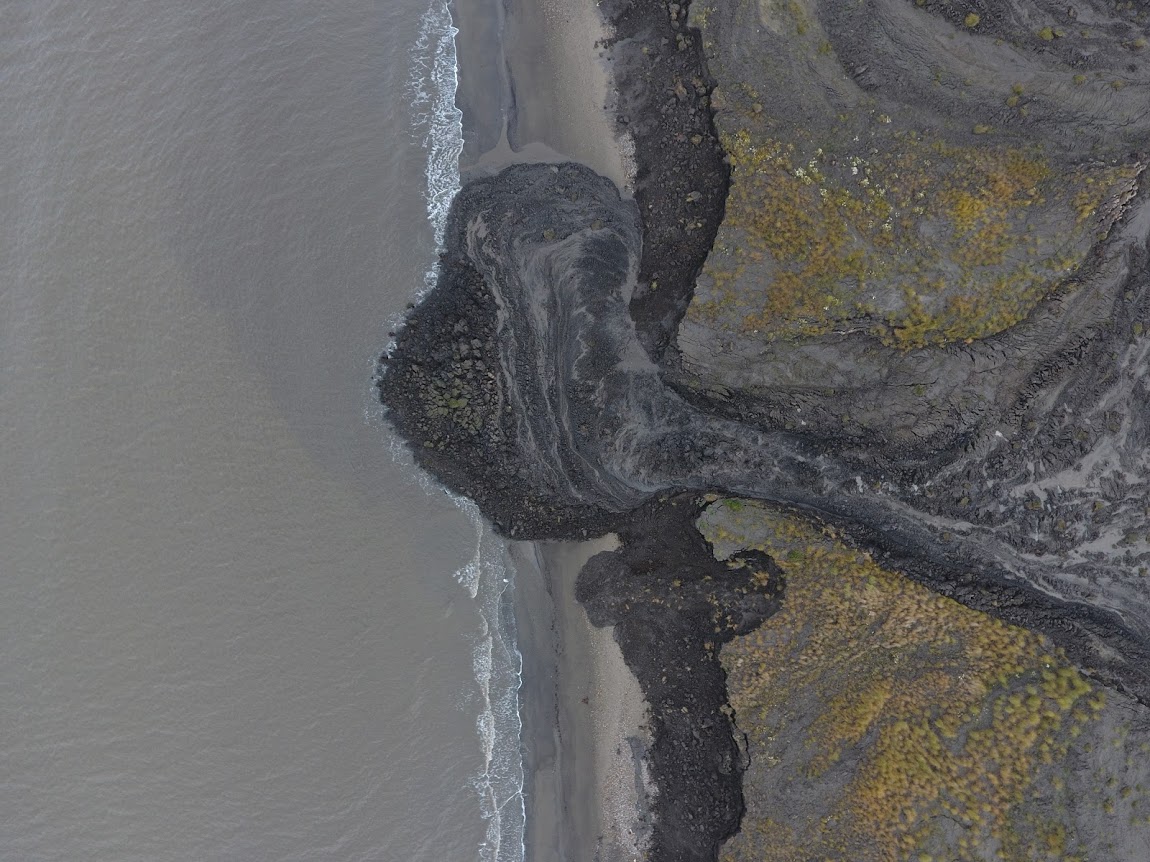 The landscape slumps into the water at North Head, resulting in dark and murky surrounding water, a trend some worry will negatively affect the marine environment. Photo: Roger MacLeod / Natural Resources Canada 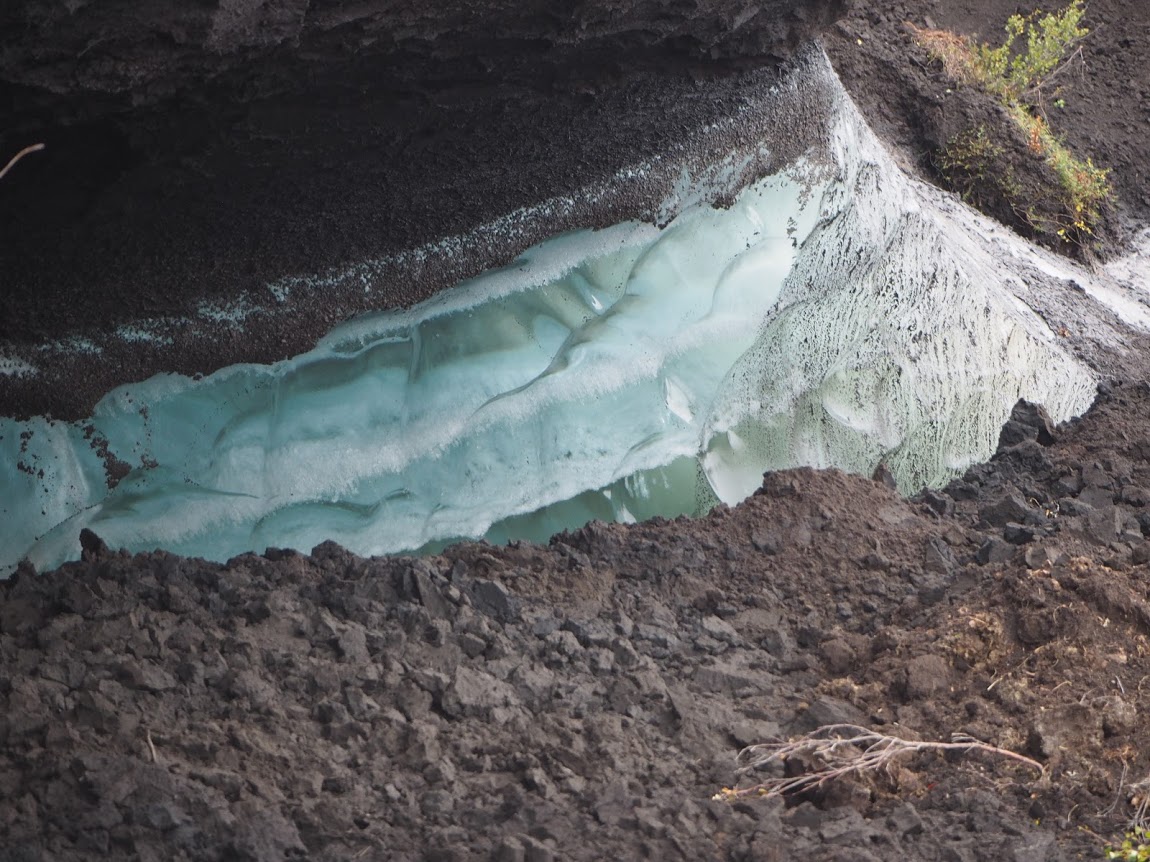 An exposed pingo. The region around Tuktoyaktuk is believed to have the world’s highest concentration of these formations. Photo: Roger MacLeod / Natural Resources Canada

But building them on permafrost presents a whole new set of challenges because that coastline is not only eroding from the constant battering of the ocean, but thawing too. Over the last few decades, the community has tried, with moderate success, to slow the erosion by reinforcing the most exposed sections of shoreline along the residential area with “rip-rap” (breakwaters made of boulders), geotextile (a fabric that covers the shore to help it maintain its integrity) and concrete pads. 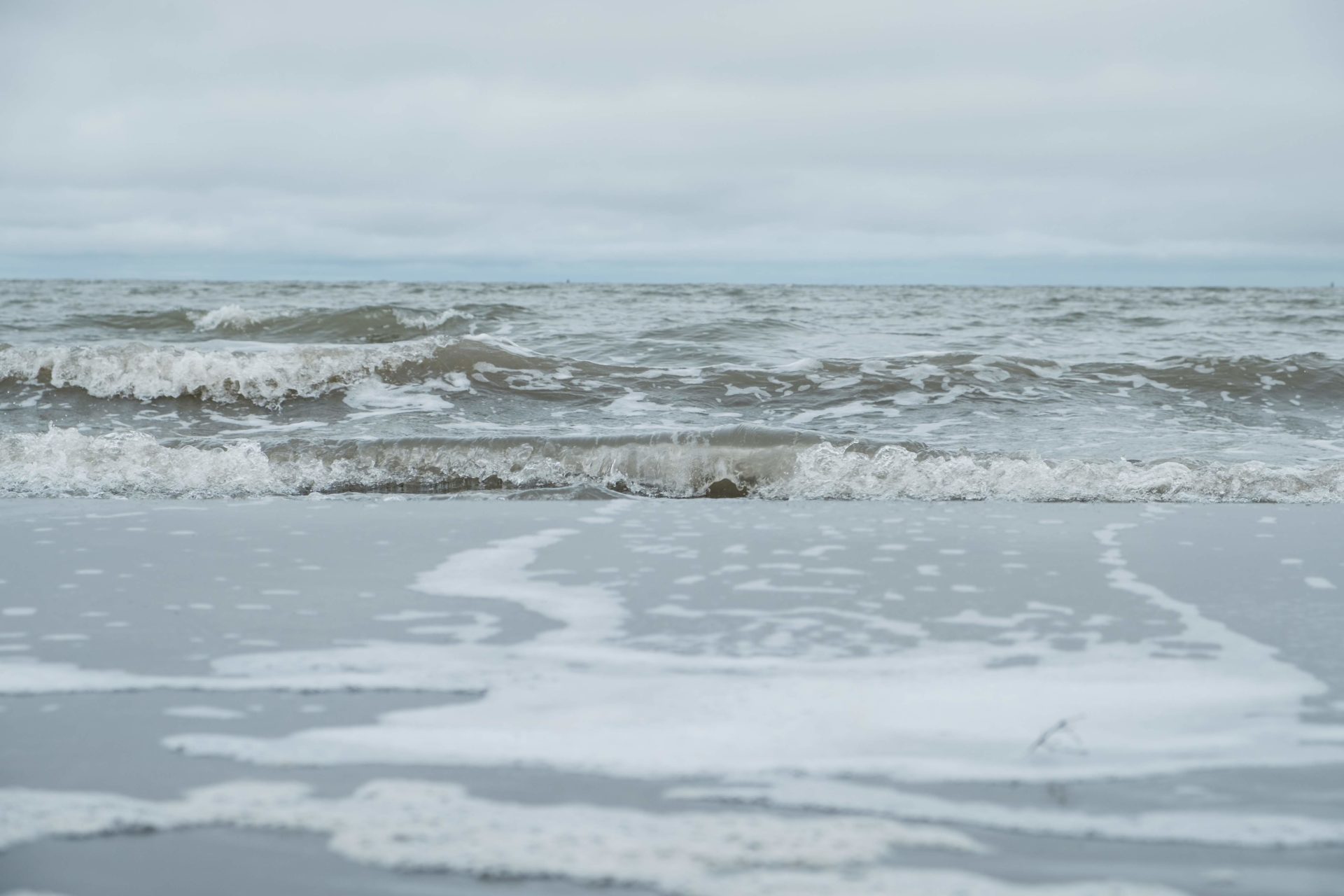 But in the face of a warming climate, some residents are wondering how long this strategy will remain viable if the land they are building reinforcements on is literally melting under their feet. 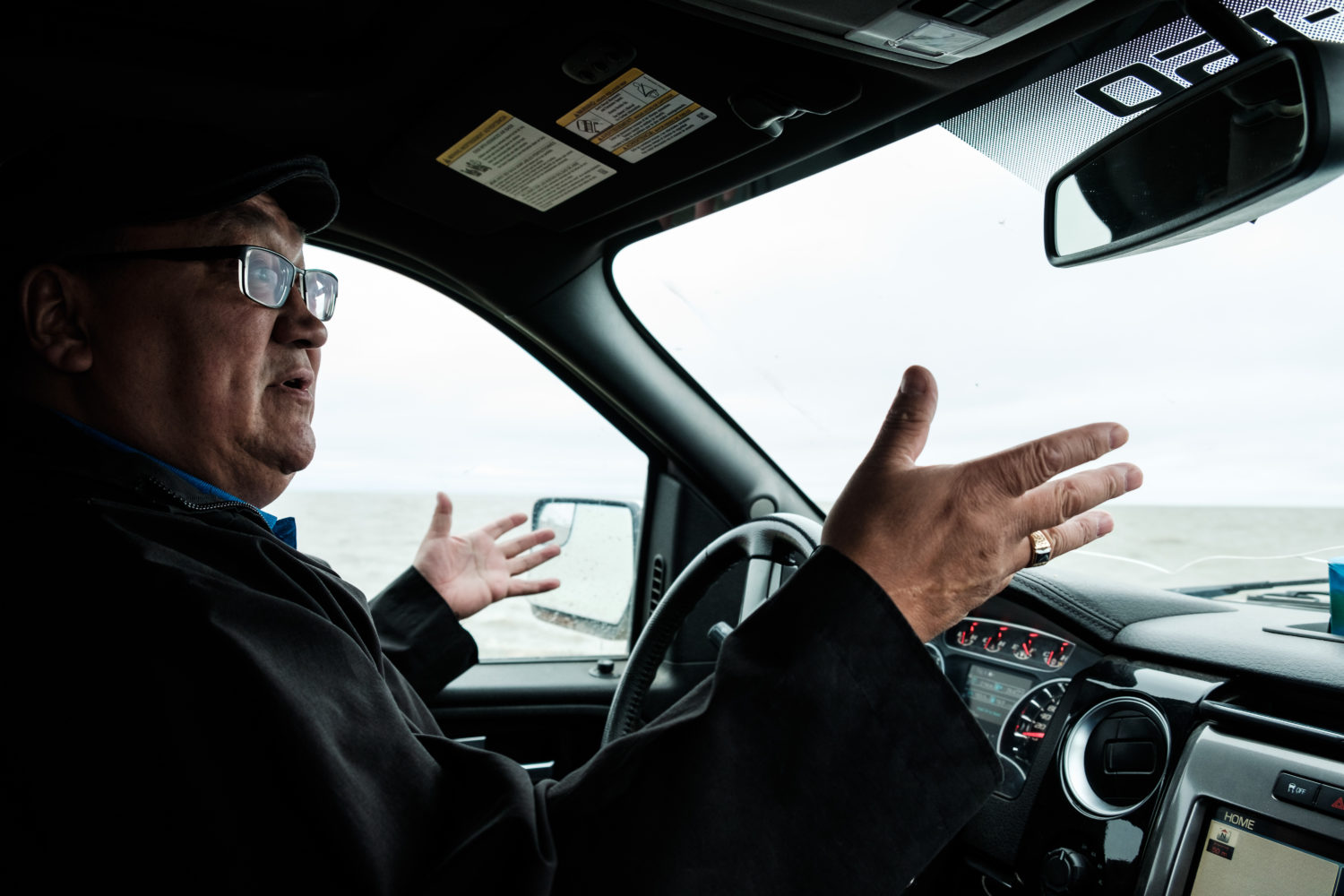 Merven Gruben, mayor of Tuktoyaktuk says that no matter what efforts the residents of the hamlet make to fight back on climate change, the efforts of a few hundred people mean nothing if the general public down south doesn’t step up to prevent further global warming. Photo: Weronika Murray 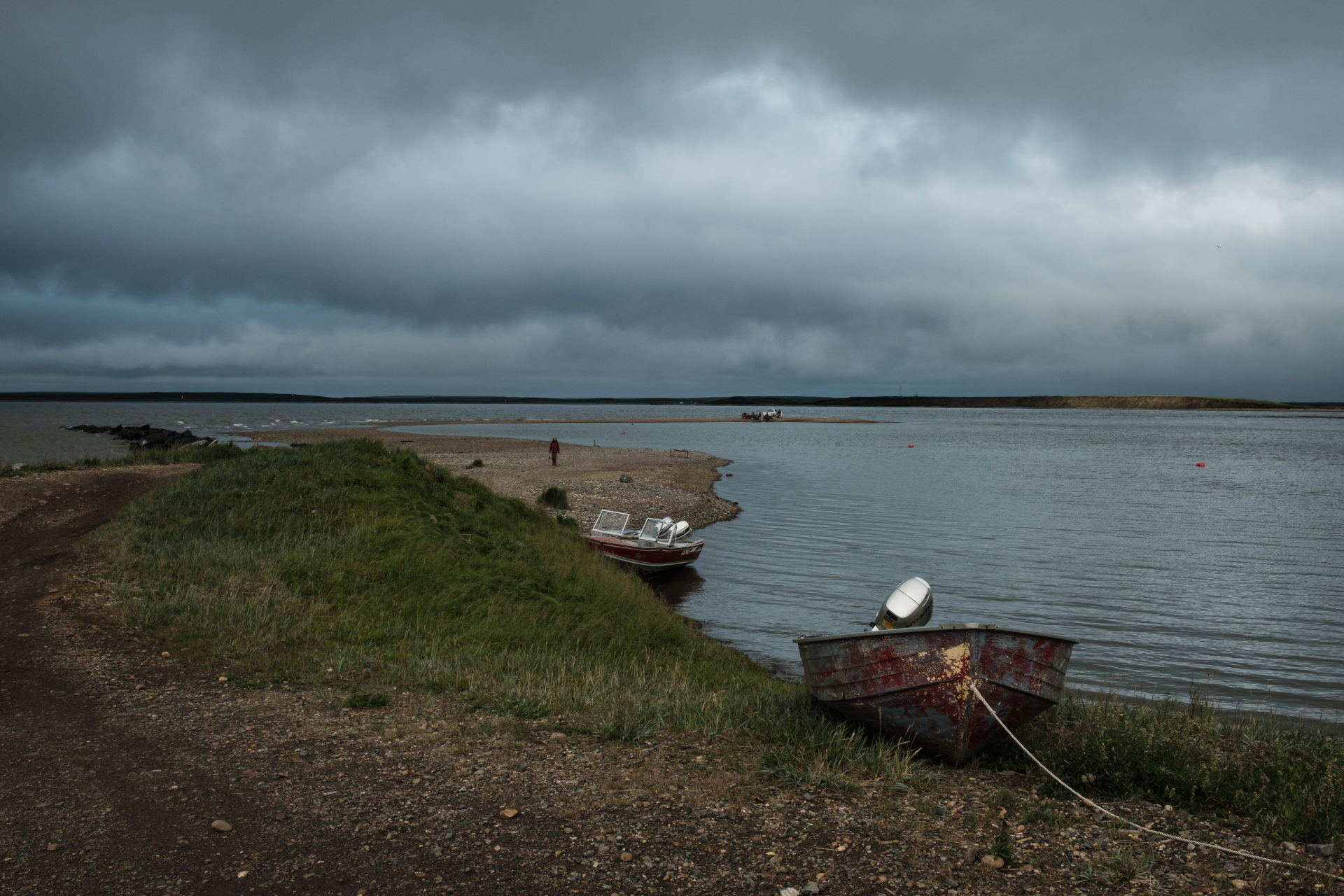 The gravelly tip of the Point is now rarely visible above the water. Photo: Weronika Murray

The Mayor of Tuktoyaktuk, Merven Gruben, says that although the northern communities are the first ones to feel the severe effects of global warming, there is very little they can actually do to slow it down.

The hamlet is looking into alternative sources of energy to cut down on fossil fuel consumption but Gruben calls that a drop in the ocean.

“We can do everything in our power to protect the town but there is one thing we can’t prevent: the permafrost thaw. All we can do is to educate the public down south to care for the environment.”

Windward sections of the coast of Pelly Island, located about 100 kilometres northwest of Tuktoyaktuk, erode at the rate of 40 metres per year. It is one of the most extreme examples of climate-change-driven shore erosion in the world. Photo: Weronika Murray
Published By

Weronika Murray is a photographer based in Inuvik, Northwest Territories. She has worked on a wide variety of stories in…