Oil industry lobbyists in Canada have taken the country by the reins. At least, that's the implication of the Polaris Institute's new report released today. The report, "Big Oil's Oily Grasp – The Making of Canada as a Petro-State and How Oil Money is Corrupting Canadian Politics," (pdf) documents 2,733 meetings held between the oil industry and federal government officials since 2008. That figure outstrips meetings with environmental organizations by a whopping 463 percent.

"Canada's increasing dependence on the export of bitumen to the United States has, in effect, served to redefine this nation in the form of a petro-state," the report opens. Lobbying activities in Ottawa may help explain why "the Canadian government has increasingly watered down or withdrawn its role and responsibilities to regulate the economic, environmental and social impacts of the tar sands industry."
The report highlights the spike in lobbying activities – of six major Big Oil players including Enbridge and TransCanada – in the period between September 2011 and September 2012, right when the industry-friendly omnibus budget Bill C-38 made its infamous debut. In that same period of time, the federal government met once with Greenpeace.
Since 2008, oil and gas industry groups held meetings with officials 367 percent more than the two major automotive associations in Canada, and 78 percent more than the top two mining associations.
"The amount of face time the oil industry gets in Ottawa in personal meetings and other correspondence greatly exceeds the time afforded other major industries in Canada," says the report's co-author Daniel Cayley-Daoust. "No one doubts the hold the oil industry has on this current government, but it is important Canadians are aware that such a high rater of lobbying to federal ministers has strong policy implications."
Significant loopholes in the Canadian Lobbying Act allow pertinent information about lobbying activities to go unreported. The oil and gas industry, for example, is not required to report how much money it spends on lobbying activities. In addition, very little information is recorded in the Federal Lobby Registry regarding specific conversations held between lobbyists and elected officials. Lobbying activities with government employees below the level of Assistant Deputy Minister are not recorded. 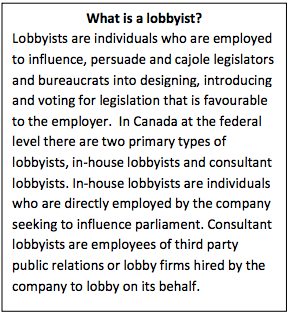 Yet lobbying is an effective way to gain access to high-level government officials, and "based on the industry friendly policy shifts over the past few years these massive lobbying efforts are paying off," the report concludes.
The Polaris Institute emphasizes notable jumps in lobbying activity that coincide with issues important to the energy industry. For example, while industry sought approval for the Northern Gateway Pipeline, lobbying from the Canadian Energy Pipeline Association spiked by 71 percent, from TransCanada by 49 percent, and Enbridge by 44 percent. During that same period between 2010 and 2011, the Canadian Association of Petroleum Producers (CAPP) increased lobbying by 121 percent. (What is a Lobbyist? writeup from Page 2 of the report)

The report states that "dependency on the tar sands as Canada's prime economic driver has occurred simultaneously, and in some ways has come as a result of, corporate involvement in how public policy is designed and implemented by the Canadian government."
The Stephen Harper government's emphasis on oil and gas development has come with a high price for average Canadians. As the Globe and Mail reported earlier today:

The Conservative government has never shied away from defending Canada’s oil and gas sector – whether branding environmental critics as “radicals” for their anti-oil-sands advocacy, lobbying European and U.S. governments to defeat punitive rules and ensure access to markets, or overhauling legislation to provide changes to environmental review processes that were supported by industry.

The Globe and Mail also reported the office of Natural Resources Minister Joe Oliver rejected the idea that industry has prioritized access to government officials. "We're disappointed that the Polaris Institute would mislead the public," said Oliver's spokesman Chris McCluskey.
However CAPP president Dave Collyer suggests the disproportinately high level of oil indistry lobbyist activity is justified: “Simply by virtue of the importance of the industry to the Canadian economy and its economic growth, I think there’s a case for the oil and gas industry engaging with the Canadian government,” he said.
Since 2009, CAPP has dominated the oil lobby's influence.

Regarding CAPP's level of involvement, the report states:

One way of quantifying the huge gap between the oil and ENGO [environmental non-governmental organization] lobby is to compare the lobby records of one of the largest environmental coalitions in Canada, the Climate Action Network (CAN), with that of CAPP. Over the past four years, CAN has only logged six communications with DPOHs [designated public office holders] while CAPP logged 536. The financial realities of these two organizations are in a different league with CAPP’s membership including the richest companies in the world. It is also clear based on registry communication data that the level of influence and access to politicians and policy makers is also quite asymmetrical and largely favors CAPP.

"Prime Minister Stephen Harper and his top ministers have spent hundreds of hours over the past few years listening to oil executives outline their policy wishes," said Polaris Institute lead researcher and report co-author Richard Girard. "We call for a full independent public inquiry to investigate the influence the oil industry is having on the Harper government through lobbying."
For more information on lobbying, and the need for an independent public inquiry, take a look at the Polaris Institute's full report.

Mary Delaney was hosting a bonfire with friends on her farmland in Pickering, Ont., on a warm day in early November 2021.  When her husband,...