As the federal government crafts its COVID-19 economic recovery plan, Indigenous leaders argue investments in guardian programs can create thousands of jobs, while protecting the land and healing communities

Indigenous guardians have been on the front lines of the response to the COVID-19 pandemic in their communities: they’ve been monitoring who is entering their communities, delivering groceries and firewood to Elders and carrying on field research when outside scientists couldn’t travel.

Now, as the country enters its recovery, some are calling for guardians — who monitor the land and water — to play an even bigger role.

“We know that recovery in this country is going to be oriented toward maintaining and hopefully creating jobs,” says Valérie Courtois, director of the Indigenous Leadership Initiative. “Well, in many of our Indigenous communities, guardians are major employers.”

“We don’t have a GM plant in Łutsel Kʼe — but we have guardians.”

Healing and hope: how Indigenous guardians are transforming conservation

Thaidene Nëné National Park Reserve in Łutsel Kʼe, N.W.T., has generated nine or 10 full-time and seasonal jobs for guardians. For a community of 300 people, that’s a significant input — the equivalent adding tens of thousands of jobs in a city the size of Metro Vancouver.

The reach of that economic stimulus has extended all the way to Yellowknife, the regional hub, where half a million dollars has been spent in the last year on equipment and supplies, such as snowmobiles, for the guardians.

The Northwest Territories is dealing with the recent closure of one of its lucrative diamond mines and the looming closure of the two that remain, resulting in the loss of billions of dollars of economic activity. Guardians will not be able to fill that void, but the jobs may facilitate new economic activity, possibly even new mines, that develop with the consent and participation of the communities. 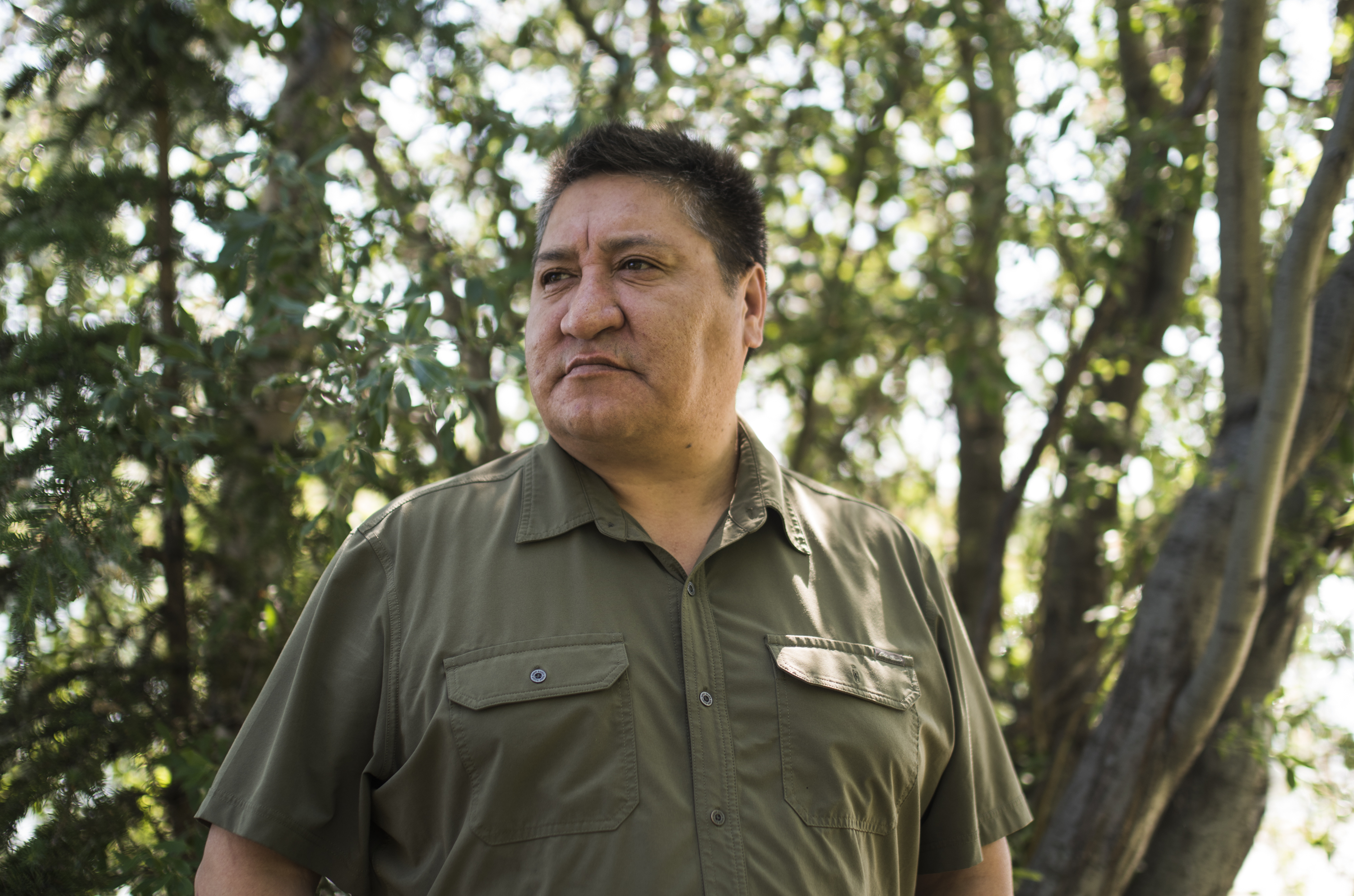 They “help create certainty for investors,” explains Steven Nitah, who was the chief negotiator for Thaidene Nëné on behalf of the Łutsel Kʼe Dene First Nation. “If Indigenous nations protect their special places … they know they have their guardians that can work with the interested industry, and will be reporting back to the nation.”

In many cases the guardians are filling a need that the federal government hasn’t been able or willing to fill with its own staff, Courtois says.

“There are lots of instances, particularly in remote places, where the government isn’t even able to fulfill its own mandates in terms of environmental protection and management,” Courtois says. “There’s a value in having guardians fill that role.”

Steve Ellis, northern Canada program lead for MakeWay (formerly Tides Canada), takes that a step further. He believes guardians should be considered as just one element of a broader move towards First Nations stewarding their own lands, not simply acting as stand-ins for public government.

“Guardians aren’t just an instrument for public governments to do their jobs,” Ellis says, “but rather an expression of Indigenous governance over land.” 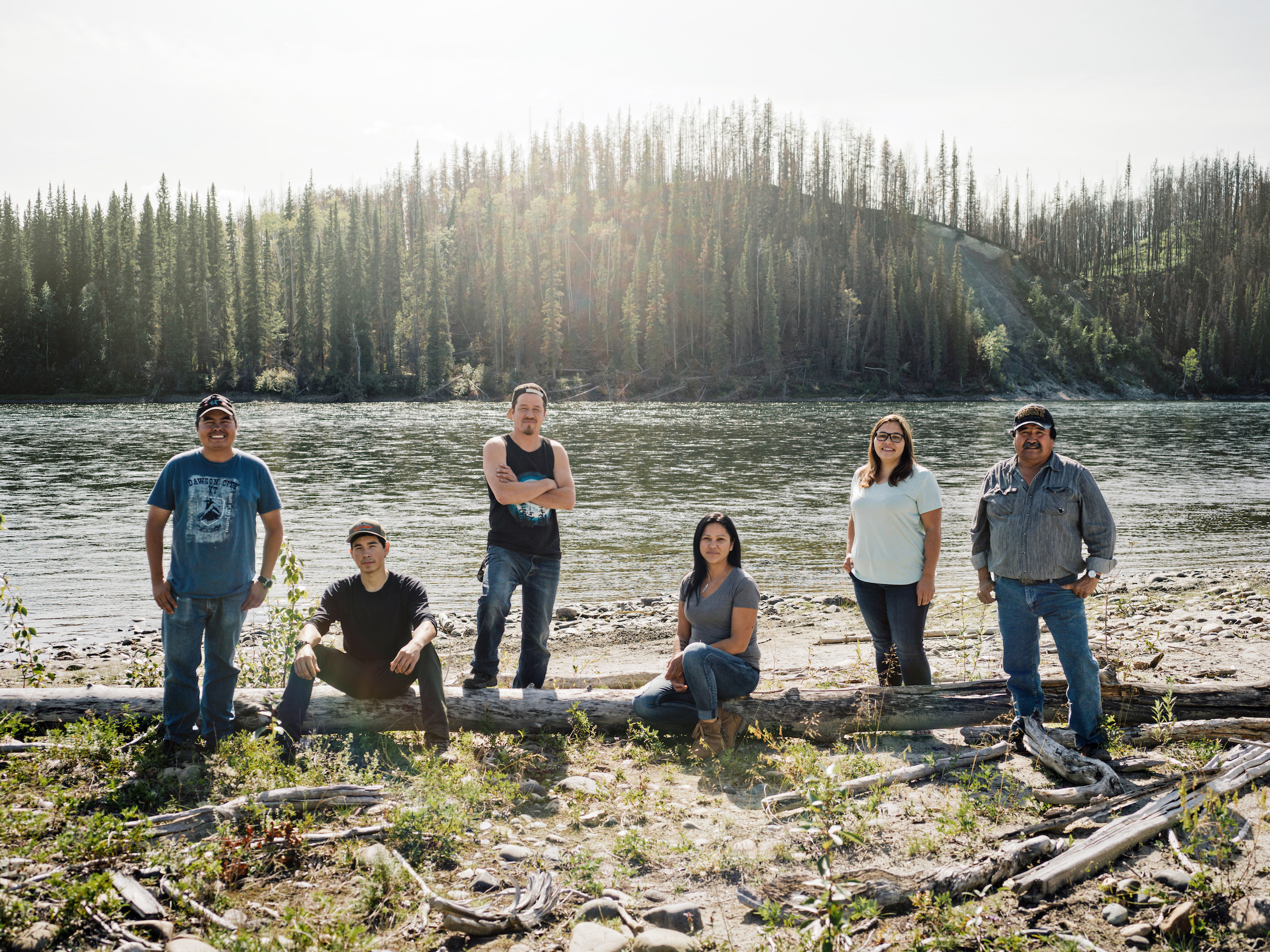 Six of eight Kaska land guardians pose by the Liard River in northern B.C. Robbie Porter (far right) teaches traditional knowledge to the Kaska land guardians, the community’s eyes and ears on the ground in their traditional territory. The Kaska Dena First Nation has proposed an Indigenous Protected and Conserved Area that covers 40,000 square kilometres of an area known as the “Serengeti of the North.” Photo: Taylor Roades / The Narwhal

The Canadian government has pledged to protect 25 per cent of the country’s land and waters by 2025, and 30 per cent by 2030. According to Environment and Climate Change minister Jonathan Wilkinson’s mandate letter, meeting that goal should be “grounded in science, Indigenous knowledge and local perspectives.”

That wording suggests a renewed emphasis on Indigenous-led conservation efforts like those in the North. During Catherine McKenna’s final months as environment minister she told The Narwhal that she expects guardians to be a part of most new park negotiations going forward.

With the federal government spending tens of billions of dollars on economic recovery, the Indigenous Leadership Initiative, of which Nitah and Courtois are a part, is angling to have the government direct some of that money to guardians.

“Why not invest in IPCAs [Indigenous Protected and Conserved Areas] and associated guardians programs, where you can create thousands of jobs in areas that are hardest for job creation?” Nitah asks.

An initial investment of $25 million from the federal government in 2017 doubled the number of guardians programs across the country. The Indigenous Leadership Initiative previously asked for $500 million, which would pay for about 1,500 guardians.

Ellis says the challenge is in convincing governments of the knock-on benefits guardians provide. Governments are looking for opportunities to create “jobs that create jobs,” he says, which means simply creating a social program isn’t enough; the jobs need to generate other benefits.

Studies have been conducted to assess how effective Indigenous guardians programs are in returning value for money. With an investment of $4.5 million, one study found the Lutsel K’e guardians generated $11.1 million in social, economic, cultural and environmental value — things like training, access to traditional foods, language retention, decreased crime and violence against women, decreased obesity and additional funding leveraged from other sources.

In the Great Bear Rainforest, the long-running Guardian Watchmen program boasts a 10:1 return on investment using similar metrics of success.

In Australia, the government recently announced AUD$700 million (CAD$650 million) for its Indigenous rangers, who helped inspire the model for formalized guardian programs in Canada. That money will set their programs up to run through 2028.

“We are certainly thinking at that scale,” Courtois says. 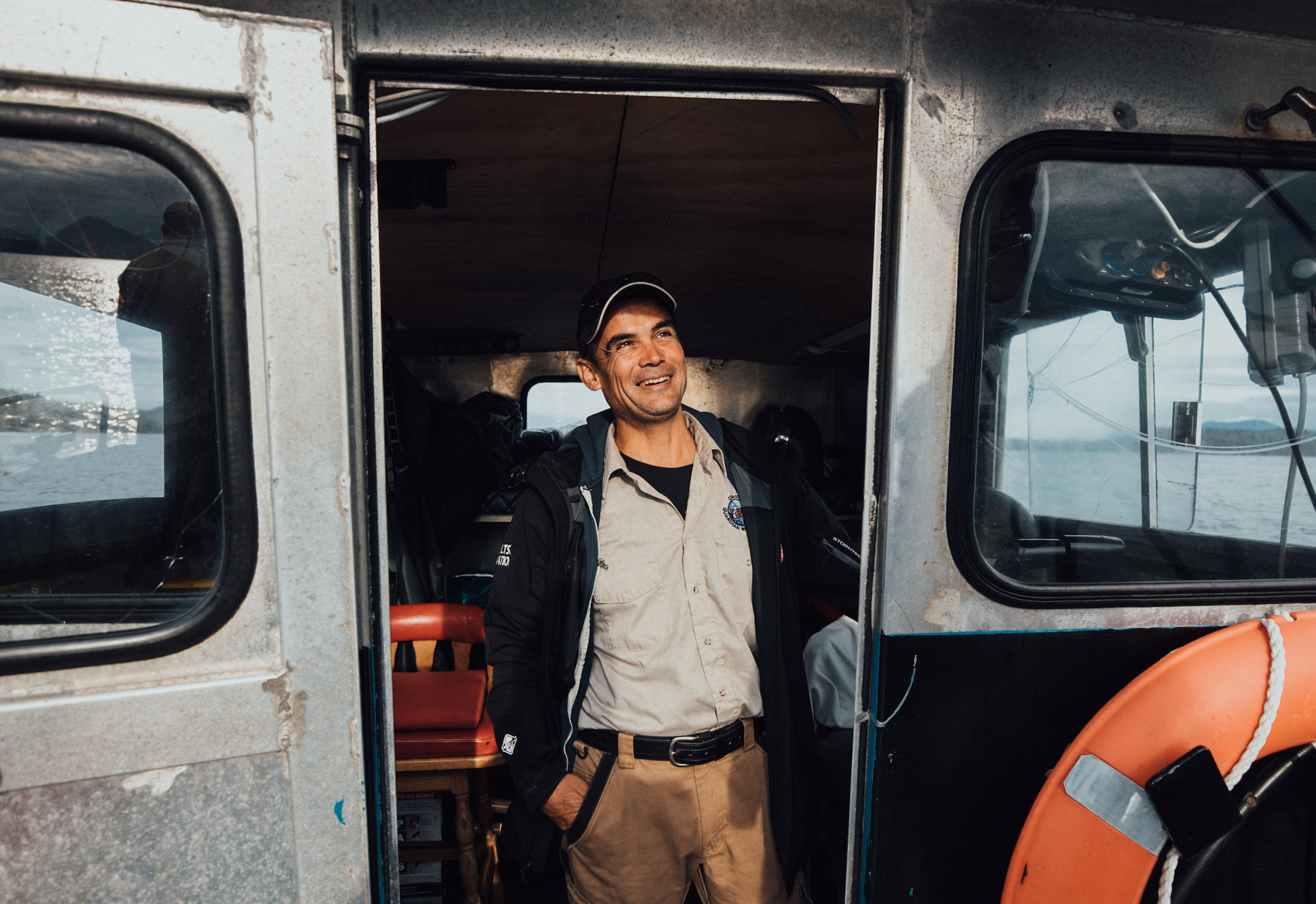 Jordan Wilson, a Heiltsuk Coastal Guardian Watchman, aboard one of the nation’s monitoring vessels. Six guardians are employed full-time in Heiltsuk territory, on B.C.’s central coast, and patrol the territory five days a week. The Heiltsuk have proposed the creation of an Indigenous Marine Response Center that would employ 37 full-time staff and crew. Photo: Louise Whitehouse / The Narwhal

‘They were talking about reviving Dene culture’

Across Great Slave Lake from Łutsel Kʼe, the Dehcho First Nations’ guardians program employs 23 people. The program was started thanks to the need to monitor the construction of Enbridge’s Line 21 pipeline as it crossed the Mackenzie River upstream of Fort Simpson.

“The only way we could support permits was if they supported our own people to do monitoring,” explains Dahti Tsetso, resource management coordinator with Dehcho First Nations.

That first summer of guardians work on Line 21 acted as a proof-of-concept for the Edéhzhíe Dehcho Protected Area/National Wildlife Area. Guardians now co-manage that new protected area as a formal part of the agreement, and are making new investments in infrastructure and equipment to do the job.

But they’re also generating connections within the community: Elders and people with bush skills like reading the weather or fixing a boat motor work with youth, who often bring tech skills to the table.

To Ellis, that’s a long overdue recognition of the skills that Indigenous Peoples can bring to the table, rather than assuming they need new skills instead.

“In Canada we have this economic mindset … that Indigenous Peoples need to be trained to participate in this economic system,” Ellis says — an approach that contributes to what he calls a “deficit mentality,” which is ultimately harmful to the people the programs purport to be helping. “If we look at guardian programs, we’re looking at asset-based economic development: what are people good at? Let’s give them a job to do that.”

Tsetso recalls going into meetings to talk about the guardians programs. She expected the meetings would talk about sampling systems and monitoring regimes. “Instead, they were talking about reviving Dene culture.”

“What you get isn’t just a paycheque,” she says, sitting outside with another Dene woman, fleshing a moose hide in the Dene tradition — which is also a part of her job.

“You get to practice and promote language, culture and a way of life, and it feels good.”

Banner: Heiltsuk Guardian Watchman Jordan Wilson prepares salmon during "Salmon Days" on Heiltsuk territory in Bella Bella, B.C. Photo: Louise Whitehouse / The Narwhal
We hear it time and time again:
“These are the stories that need to be told and you are some of the only ones telling them,” John, a new member of The Narwhal, wrote in to say.