Canada’s Overall Emissions Are Going Down But We’re Further Away from Meeting Our Climate Goals. Guess Why.

Canada is getting further away from meeting its climate target under the Paris Accord, despite an overall reduction in emissions, according to the government’s latest submission to the United Nations as part of its reporting requirements under the international climate treaty.

While most sectors of the Canadian economy have reduced their carbon output, the latest report shows growth in oil and gas and “demographic changes” are responsible for a widening gap between Canada’s greenhouse gas output and the country’s 2030 climate targets.

A spokesperson for Environment and Climate Change Canada declined to specify just how much of the new emissions growth is projected to come from population growth and how much is due to growth of oil and gas.

But Keith Stewart, energy campaigner with Greenpeace Canada, said he’s skeptical much of the projected growth in Canada’s emissions comes from outside oil and gas — the single most polluting sector in the country.

“I have trouble believing there have been dramatic changes in projections of demographic growth,” says Keith Stewart, energy campaigner with Greenpeace.

Canada committed to reduce its emissions to 517 megatonnes (MT) of carbon dioxide equivalent — about what is emitted annually from 128 coal-fired plants — by 2030 under the Paris Accord.

When Canada presented its climate plan, the Pan-Canadian Framework, in 2016, it estimated it would miss its reductions goal by 44 MT in 2030.

But in this year’s submission, Canada estimates it will now miss that mark by 66 MT — a 50 per cent increase from last year’s projection.

The new projections reveal a growing gap between Canada’s goals for 2030 and what government thinks will actually happen based on internal modeling.

“The gap is getting bigger and it’s because of oil and gas,” says Stewart. 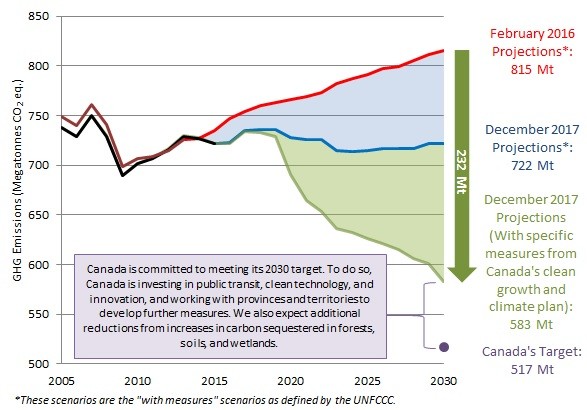 Canada wants to blame transportation but…

In Canada’s report to the UN, the government highlights the challenge of transporting goods and people between its spread-out urban centres.

“Currently at 36.7 million inhabitants, it is anticipated that Canada’s population could reach between 40.1 and 47.7 million by 2038,” the report explains.

“The large distance between metropolitan areas and low population density generates high emissions from the transportation sector making it the second largest contributor of GHG emissions in Canada.”

One might get the impression population growth will increase transportation and therefore  emissions.

But according to the same report, emissions from the transportation sector are already plateauing, and expected to fall over the next ten years.

Emissions from oil and gas, however, are steadily rising, and predicted to continue to do so. 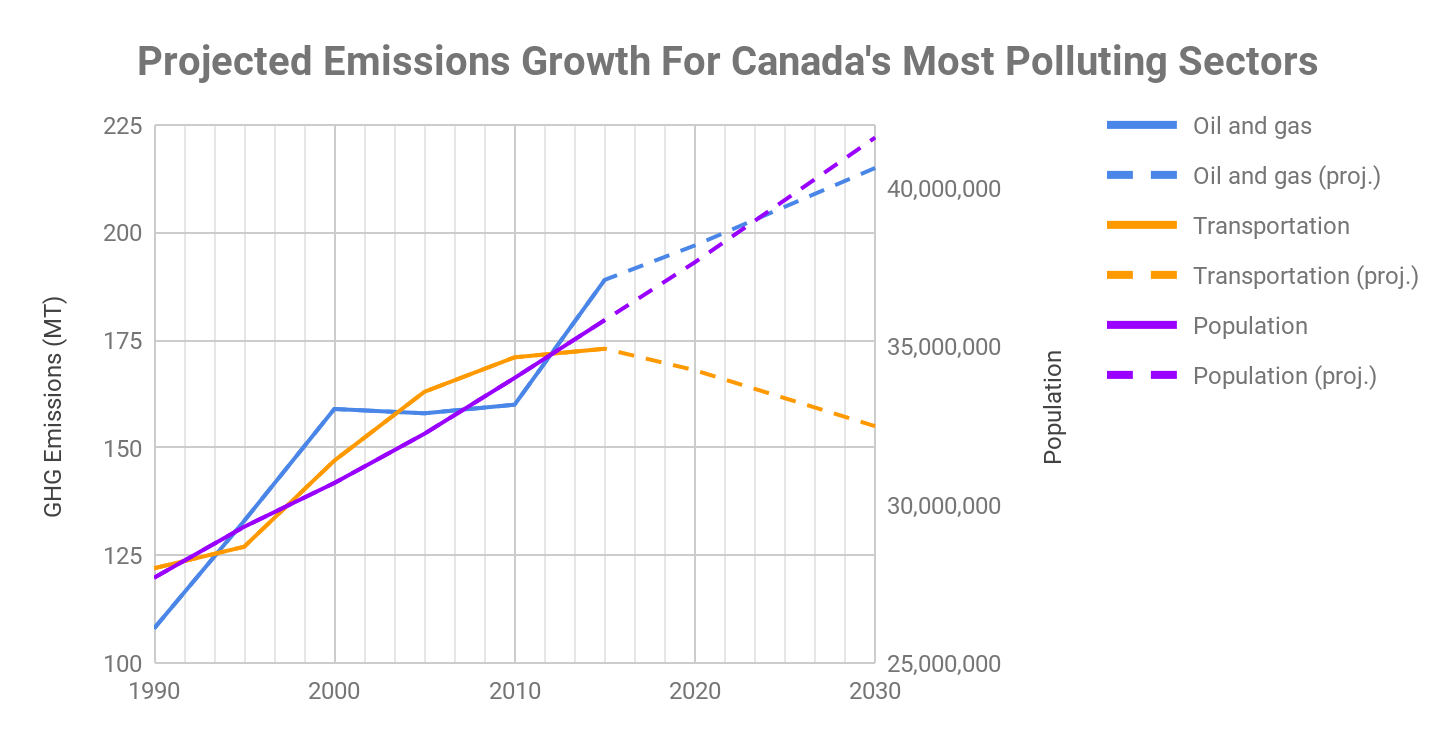 Pipeline capacity ‘will be built as needed’

In fact, increasing pipeline capacity is an assumption baked into projections for both Canada’s energy production and emissions growth.

When asked to explain how new pipeline projects, like the Kinder Morgan Trans Mountain pipeline, factor into projected emissions growth, a spokesperson for Environment and Climate Change Canada said their modeling assumes pipelines will be built to accommodate oil production projected by the National Energy Board.

“For oil and gas production projections in particular, we align our forecast with National Energy Board’s projections, which were revised this year,” the spokesperson wrote in an e-mail.

“With regard to your question on Kinder Morgan, the National Energy Board’s projections assume pipeline capacity aligns with oil production but does not factor in specific pipeline projects.”

The National Energy Board’s projections, released in Canada’s Energy Future 2016: Energy Supply and Demand Projections to 2040, state, “over the long term, all energy production will find markets and infrastructure will be built as needed.”

Yet Stewart says that laissez-faire attitude is contradicted by lobbying and public relations campaigns from oil and gas companies, which stress the need for new pipelines in order to grow the industry.

“Pipeline approvals increase production,” he says. “That’s why you do them.”

That increase in production is the wedge holding open that emissions gap, preventing Canada from meeting climate targets.

“Today’s decision is an integral part of our plan to uphold the Paris Agreement to reduce emissions while creating jobs and protecting the environment,” Trudeau told reporters at a November 2016 press conference.

Alongside Trans Mountain Trudeau also approved an application to increase the capacity of the Enbridge Line 3 pipeline.

According to Environment and Climate Change Canada, the two pipelines represent an annual increase in emissions of 23 to 28 megatonnes — the equivalent of adding 58 million cars to the road.

Trudeau has since refined his claim, arguing new pipeline approvals are a tradeoff to keep Albertans onside with national climate policies.

But there is evidence that Canadians, even Albertans, are coming around on climate change. A recent Abacus poll found 72 per cent of Albertans saw economic opportunity in combatting climate change.

Not that all of the province’s politicians are listening. Political polls currently show the opposition United Conservative party under Jason Kenney — who has roundly rejected carbon taxes and has a climate denier as campaign manager — leading by a wide margin.

“If Canada is pinning its climate action plan on an NDP dynasty, that, to my mind, is not a wise move,” says Stewart, who is not optimistic about the chances of Kenney having a change of heart if he were to be elected. “There is nothing the federal government can do that is going to get Jason Kenney onside for climate action.”

Some reductions not yet included in models

In an emailed statement, Environment and Climate Change Canada provided some good news to go with the bad: it says some of the government’s climate policies haven’t yet been factored into the models.

“There are some measures in the Pan-Canadian Framework that are at early stages and thus difficult to model,” the agency’s spokesperson wrote.

“For example, historic investments in public transit, support for clean technology, and the potential for increased carbon sequestration from forests, soil and wetlands are not factored into our projections yet, but we do expect to see emission reductions from those measures over time.”

Because of the unknown contribution those measures could have, it’s hard to rely on them for hope that the next projections will be closer to Canada’s Paris goals.

For Stewart, the solution to the missing reductions is political — to build consensus around the worthiness of climate action and get that message across to leaders.

“We have to build a political movement that says, ‘if you’re willing to take on the oil industry, we’ve got your back.’”

Banner: Illustration: Carol Linnitt
We hear it time and time again:
“These are the stories that need to be told and you are some of the only ones telling them,” John, a new member of The Narwhal, wrote in to say.