In the wake of troubling reports of police threatening to arrest journalists for photographing police in tactical gear on Wet’suwet’en territory in northwest B.C. on Thursday, the president of The Canadian Association of Journalists told The Narwhal the RCMP has no right to step in between journalists and the public’s right to know.

“Reporters need to be there to witness police actions, especially against Indigenous people,” Karyn Pugliese said.

The Wet’suwet’en’s hereditary leaders are opposed to the $6.6 billion Coastal GasLink pipeline, which is under construction to move fracked gas from B.C.’s northeast to LNG Canada’s export facility in Kitimat, B.C.

“The RCMP need to realize we are not a police state. They don’t get to control editorial,” Pugliese said.

“The public has a right to know what’s going on so they can make good democratic choices. There’s no role for police to decide they’re going to step in between journalists and the public’s right to know.”

Pugliese said she confirmed reports that journalists were told by the RCMP not to photograph or film officers in tactical gear carrying assault rifles or arrests — or they’d be at risk of arrest themselves. Police also detained journalists in a van and removed them from the site.

I just got out from #Gidimten clan territory on #Wetsuweten yintah, where RCMP conducted an aggressive, pre-dawn raid. Six land defenders arrested: pic.twitter.com/JkKempHUGM

Amber Bracken, a freelance photographer for The Narwhal, now finds herself in the challenging position of risking arrest simply by documenting unfolding events behind what are now police lines. Bracken has been on the ground in Wet’suwet’en territory since Jan. 12. Last January, Bracken photographed the RCMP raid on Wet’suwet’en hereditary chiefs and their supporters for The New York Times.

“In my experience, I’ve dealt with police many, many, many times, and they generally control the areas you can photograph, but to have them say you can only photograph this thing, not that thing, that’s bizarre,” Bracken told The Narwhal.

“My concern is that they’d use that in the moment to basically take me under arrest and then I can’t do my job,” Bracken said. “You can sort it out in court later, but that’s too late.”

Bracken is at the Unist’ot’en camp at the 66-kilometre mark of the Morice West Forest Service Road, which had not been raided by police as of 5 p.m. on Thursday.

Online media outlet Ricochet received a response from the RCMP Thursday afternoon indicating the outlet’s reporter, located at the 44-kilometre mark, would be subject to arrest.

After not responding to calls and emails all day, just got this from RCMP informing us that they plan to arrest Ricochet journalist @GitxsanJt for doing his job and reporting on police activity in the injunction zone. Does the @jjhorgan government respect press freedom? #bcpoli pic.twitter.com/TItRWlwW5L

The CAJ has verified numerous reports that the #RCMP have threatened to arrest #cdnmedia journalists at #Wetsuweten Territory for taking photos. We remind @BCRCMPMedia that Canada is not a police state. Police do not have the right to control what is published. pic.twitter.com/V2hVK2PLhA

The RCMP had not responded to a request for comment from The Narwhal by press time.

RCMP made the arrests to enforce a court-ordered injunction extension granted Jan. 31 that prohibits anyone from restricting access to Coastal GasLink workers and contractors. The hereditary chiefs, along with other Wet’suwet’en members and their supporters, had set up checkpoints along an access road, saying they do not want the pipeline on their traditional territory.

The arrests were carried out even though Coastal GasLink is missing a key authorization and it could be up to several months before the company can proceed with construction in the disputed area.

In March 2019, the Newfoundland Court of Appeal overturned the conviction of journalist Justin Brake, who was threatened with arrest when reporting on an Indigenous-led occupation at the Muskrat Falls hydro dam in October 2016.

The court decision reaffirmed that special considerations apply to journalists covering a protest even when an injunction order has been issued. Those considerations include if the person is engaged in good faith journalistic coverage, is not actively assisting the protesters, is not interfering with law enforcement and if the matters being reported on are of public interest. 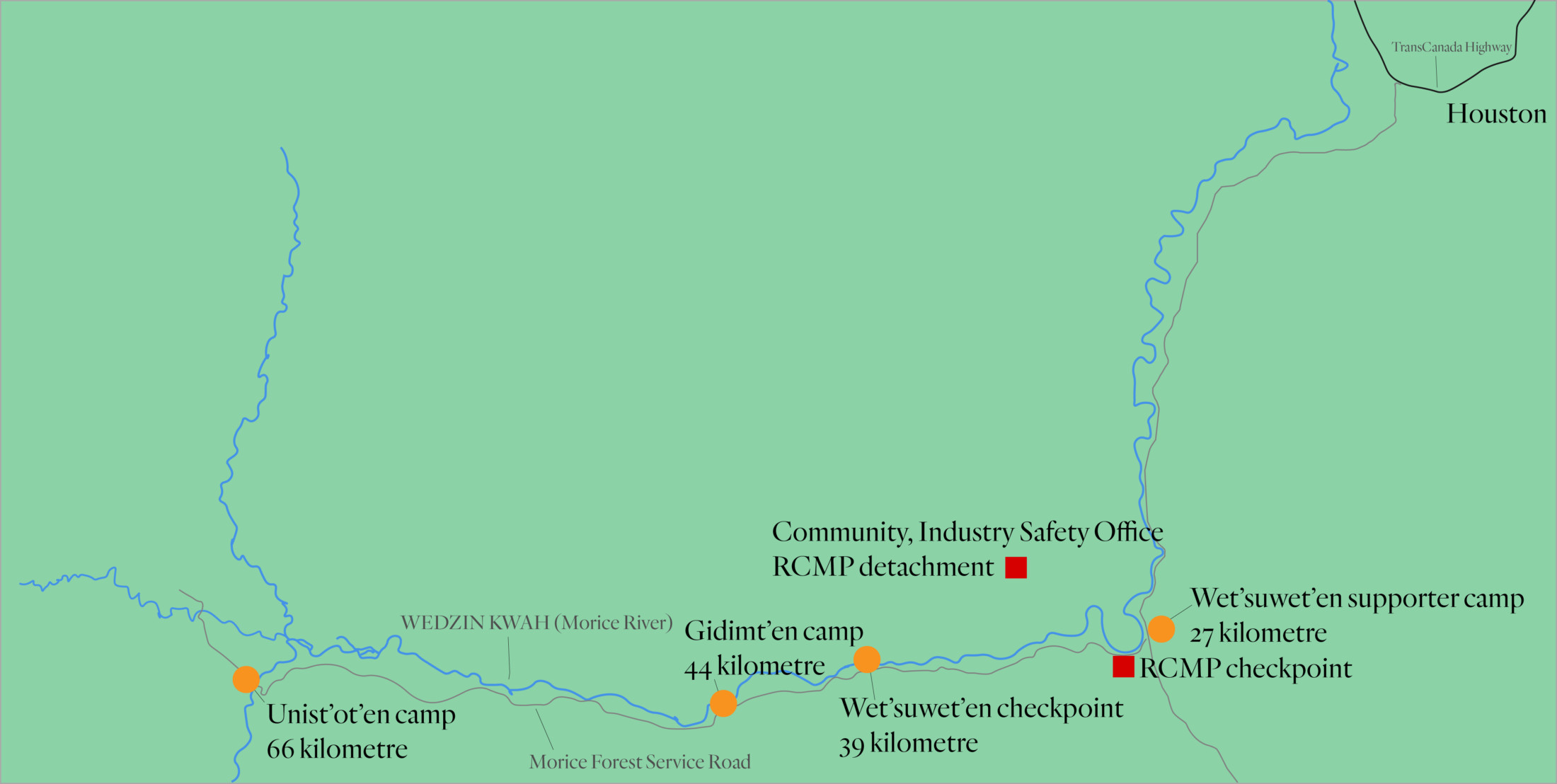 Location of camps in Wet’suwet’en territory. The RCMP exclusion zone extends from the RCMP checkpoint west, past the Unist’ot’en camp. Map: Carol Linnitt / The Narwhal

Justice Derek Green noted the importance of the media in advancing reconciliation and understanding of Indigenous Peoples and issues, stating that “particular consideration should be given to protests involving Aboriginal issues.”

Pugliese noted both the Charter and the courts grant journalists a legitimate right to be on the scene.

“RCMP must not use an injunction to shield itself from public scrutiny,” she said.

In January 2019, an injunction ordered that no one could come within 10 metres of any person or vehicle related to the Coastal GasLink pipeline project on Wet’suwet’en territory. The RCMP used that court order to restrict access to everyone, including journalists, from coming within 27 kilometres of the Gidimt’en camp while police moved in on demonstrators.

In December, The Guardian reported that internal documents showed RCMP commanders instructed officers to “use as much violence toward the gate as you want” and stated that “lethal overwatch is req’d” ahead of the operation.

“What they’re doing is protecting themselves and doing a PR job and keeping the public from knowing what’s going on,” Pugliese said.

Trees block the road in Wet’suwet’en territory near the Gidimt’en camp, after hereditary chiefs served an eviction notice to Coastal GasLink workers on Sunday, January 5, 2020. Photo: Amber Bracken / The Narwhal

“The BCCLA strongly urges the RCMP to refrain from instituting exclusion zones that prohibit the public, invited guests of the Wet’suwet’en and media from accessing the area,” the association’s executive director Harsha Walia said in an open letter.

“Freedom of the press is enshrined in the Canadian Charter of Rights and Freedoms. Police-enforced media exclusion zones violate the Charter by seriously impeding freedom of expression,” the letter read.

“As the Supreme Court of Canada has held, ‘Strong constitutional safeguards against state intrusion are a necessary precondition for the press to perform its essential democratic role effectively.’ ”

Update Feb. 6, 2020, at 7:15 p.m. PST. This article previously stated journalist Justin Brake was arrested while covering land occupation near the Muskrat Falls dam project. It has been corrected to indicate he was faced with the threat of arrest if he did not vacate the location.

Banner: Supporters watch for news at a Wet’suwet’en reoccupation camp near Houston, B.C. on Monday, January 13, 2020. Photo: Amber Bracken / The Narwhal
We hear it time and time again:
“These are the stories that need to be told and you are some of the only ones telling them,” John, a new member of The Narwhal, wrote in to say.

Emma Gilchrist
Emma Gilchrist is a reporter, editor, public speaker and spreadsheet-keeper. She started her journalism career more than 15 years ...