Last week, the Alaskan government issued a waste management permit to Constantine North, allowing the company to discharge waste water from an underground tunnel at its Palmer project, upstream of Haines, Alaska, and alongside B.C.’s Tatshenshini-Alsek Provincial Park

By Jimmy Thomson
Share
The Chilkat Tlingit village of Klukwan can be seen in the distance behind the confluence of the Tsirku, Klehini and Chilkat rivers in Alaska. Photo: Connor Gallagher

Jessica Plachata grew up spending her summers at Lake Coeur D’Alene in Idaho. She would swim in and drink from the lake, and eat fish she and her family caught in it. She didn’t know it then — nobody did — but she was slowly poisoning herself.

Upriver, a complex of mines had been dumping the leftovers from lead, zinc and silver mining into the river system that drained into the lake. She had spent her youth swimming in what would later become the largest “superfund” contaminated site in the United States.

Plachata found in her 20s that she had levels of heavy metals like cadmium, mercury, lead and even uranium in her body that put her in the 97th percentile for her demographic. The metals put her at risk of cancer, reproductive problems and more. She spent decades labouring to bring her levels down, fearful of what it might mean for her future children, but when she had a son at age 38, he was born at the 100th percentile anyway.

Today Plachata lives in the postcard-beautiful expanse of Alaska’s Chilkat Valley. The cool, glacier-fed streams are home to eulachon, trout and all five species of Pacific salmon.

The Chilkat Valley has the most species of mammals anywhere in southeast Alaska, 38 species in all, and a late salmon run that brings animals from all over when the other runs have ended.

Plachata has a well on her property that provides her and her family with clean, fresh water. Their freezer is full of fish from the river.

But now, even there, the prospect of metals in the water has found her.

“It’s terrifying,” she says, as someone who knows how difficult it is to rid her body — and the land — of heavy metals.

“It’s a chemical reaction that can’t be undone.”

‘Point of no return’

The State of Alaska has been making headlines in recent months. Its university system’s budget was slashed so deeply that some question whether it can even survive. The race for oil is back on, with Governor Michael Dunleavy writing a letter to U.S. President Donald Trump begging for a host of federal restrictions to be lifted, including an assertion that water regulations should not apply to wetlands because “lands are not waters.” In the meantime, state environmental regulations are being ignored.

One development in particular is catching Archibald’s attention as a sign of the times in Alaska. Last week the Canadian-owned Palmer VMS project received a permit from Alaska’s Department of Environmental Conservation to discharge waste water from an underground exploration tunnel.

The tunnel will dump contaminated water underground just feet away from a tributary of one of Alaska’s best salmon-producing rivers. The mine exploration project is 56 km upstream of Haines, a town with thriving ecotourism and salmon-fishing industries. It’s 29 km upstream of the ancient Tlingit village of Klukwan, which has survived on salmon for millennia.

It’s nestled into a northern corner of Alaska’s panhandle, a geographic oddity where B.C. is actually to the north and west. It butts up against B.C.’s Tatshenshini-Alsek Provincial Park on the other side of the border. 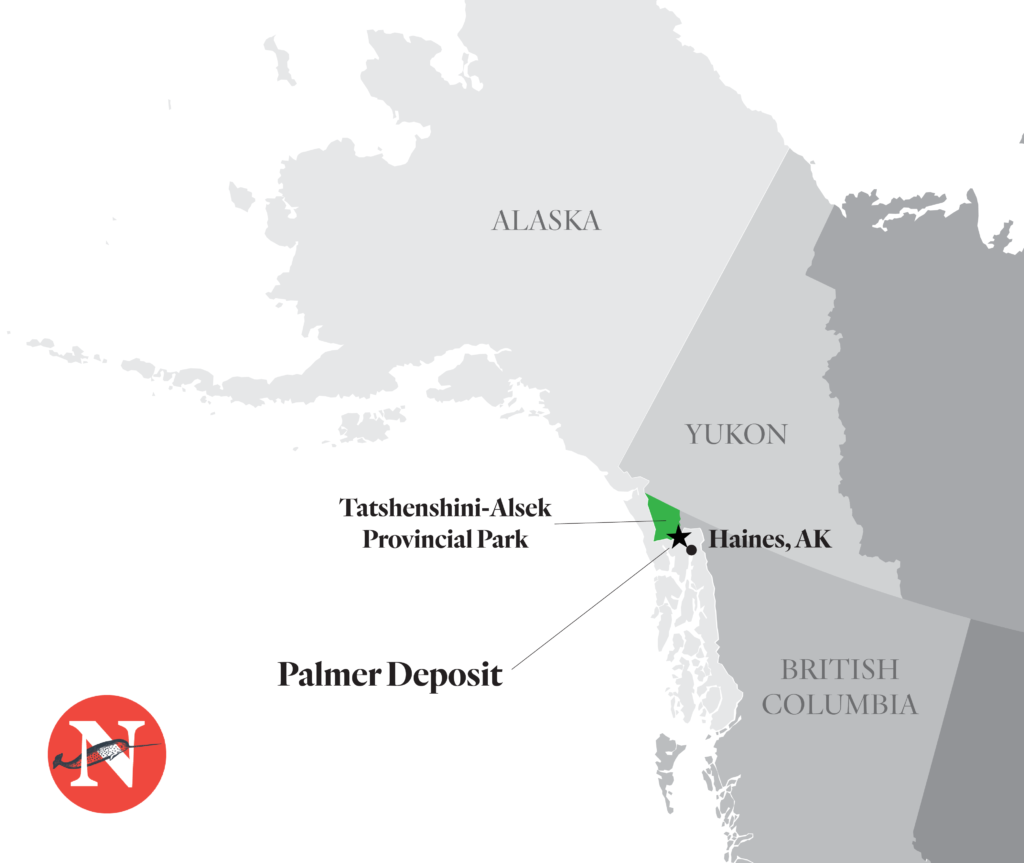 The Palmer deposit in southeast Alaska. Map: The Narwhal

Constantine North Inc., in search of sulphide minerals containing zinc, copper, silver and gold, is proposing to dig a five-metre-wide tunnel into the side of a mountain. That will generate 70,000 cubic metres of waste rock — 40 Olympic swimming pools’ worth. Those sulphides, ground up and exposed to air and water, become a permanent risk for acid rock drainage.

Inside the mountain, the tunnel will hit groundwater. When that happens, Archibald says “they’re going to be dealing with wastewater discharge forever. It’s a point of no return.”

The company will have to do something about the groundwater (now contaminated by the heavy metals in the crushed sulphide rock) seeping from the tunnel in perpetuity. The plan is to pipe it into settling ponds, where sediment can drop out of the water. It will then be piped under a talus slope — a field of rocky debris prone to rockslides — to a drainage field about two metres under the gravel.

The drainage field is within a few metres of Hanover Creek, which joins Glacier Creek as it runs down into the Chilkat River. As much as 750 litres of water will be pumped into that drainage field every minute.

The company did not have to prove that the water would not contaminate Glacier Creek. It was supposed to show that the ground where the water will be discharged is not connected to the surface water — but it failed to do so, Archibald says, and then didn’t test again after changing the plan.

In the end, the permit allows for it to pollute the surface water regardless: the permit explicitly authorizes some degradation of the water of Glacier Creek.

By not discharging the water directly into the creek, Constantine North avoided a much lengthier and more in-depth permitting process that includes cost-benefit and degradation analyses.

“They’re avoiding all of this by dumping it underground.”

The permitting process also narrowed the scope beyond what locals had hoped for. The state refused to consider the generators, fuel tanks, avalanche risk and other hazards that will necessarily accompany the project. An earlier lawsuit also ended in disappointment when a U.S. District Court for the State of Alaska ruled that the review did not need to consider the prospect of future mining. Instead, the review only considered the wastewater.

Constantine North did not respond to a request for comment.

The village that has always been

About 25 km upriver from where the Chilkat River empties into the Chilkat Inlet at Haines, it is joined by its largest tributary, the Klehini River. The Klehini, tumbling down from the mountains to the northwest in B.C.’s far north, is where Disney’s adaptation of White Fang was filmed. Its rapids are well known among paddlers, and its braided gravel is equally prized among fishermen.

Just below where the two rivers meet is the village of Klukwan, whose name translates to “ancient village; the village that has always been.”

“We’re told as we’re growing up … the mountains or the area around us is our food bowl,” Kimberley Strong, president of the Klukwan Tribal Council, told The Narwhal.

The Klehini River is joined above where it meets the Chilkat by Glacier Creek, the waterway into which the Palmer project has just been permitted to degrade. The prospect of a new mine upstream, and the exploration activity that will prove the mine’s worth, is weighing on the village.

“We’re having a really difficult time,” she says, outraged at the process that has kept her people out of the decision-making process. “It’s public lands that used to be the tribal lands of my tribe, and we have no say.”

The mine would have to be cared for into perpetuity. For the people of the eternal village, “forever” isn’t an abstraction. It’s a concept underpinning their culture and their home.

Strong doesn’t believe the company when they tell her they will clean up after themselves.

“There are abandoned mines across the country that had promises of cleanup, that they’re going to be maintained forever,” she says.

What Plachata knows from her experience absorbing the heavy metals of Lake Coeur D’Alene is that what does persist forever is the damage. Today, she works with a nonprofit, Lynn Canal Conservation, against the development of the project.

“It’s important that people understand that mine waste is a lot like nuclear waste,” she says. “It’s a contaminated gift that keeps on giving for hundreds or thousands of years.”

Banner: The Chilkat Tlingit village of Klukwan can be seen in the distance behind the confluence of the Tsirku, Klehini and Chilkat rivers in Alaska. Photo: Connor Gallagher
We hear it time and time again:
“These are the stories that need to be told and you are some of the only ones telling them,” John, a new member of The Narwhal, wrote in to say.