At least a quarter of major fish stocks in Canada are in decline, but efforts to rebuild them  — such as closing fisheries or setting catch limits — are often met with strong opposition due to negative socioeconomic effects. Now a new study by University of British Columbia researchers shows the short-term financial pain can lead to long-term gain — and that pain can be eased by providing fishers with social and economic assistance.

The study, published in the September 2020 issue of Ocean & Coastal Management, found the most optimistic rebuilding scenario would lead to economic gains of up to 10 times above the status quo after 30 years for five of the six studied species. The analysis also found the gains would continue to climb over 50 and 100 years.

“If you look at societal, national or provincial problems, the struggle between the short term and the long term is huge. Most of us think of today, today, today,” co-author and professor of bioeconomics Rashid Sumaila said in an interview.

“We shouldn’t discount the fish of our grandchildren.” 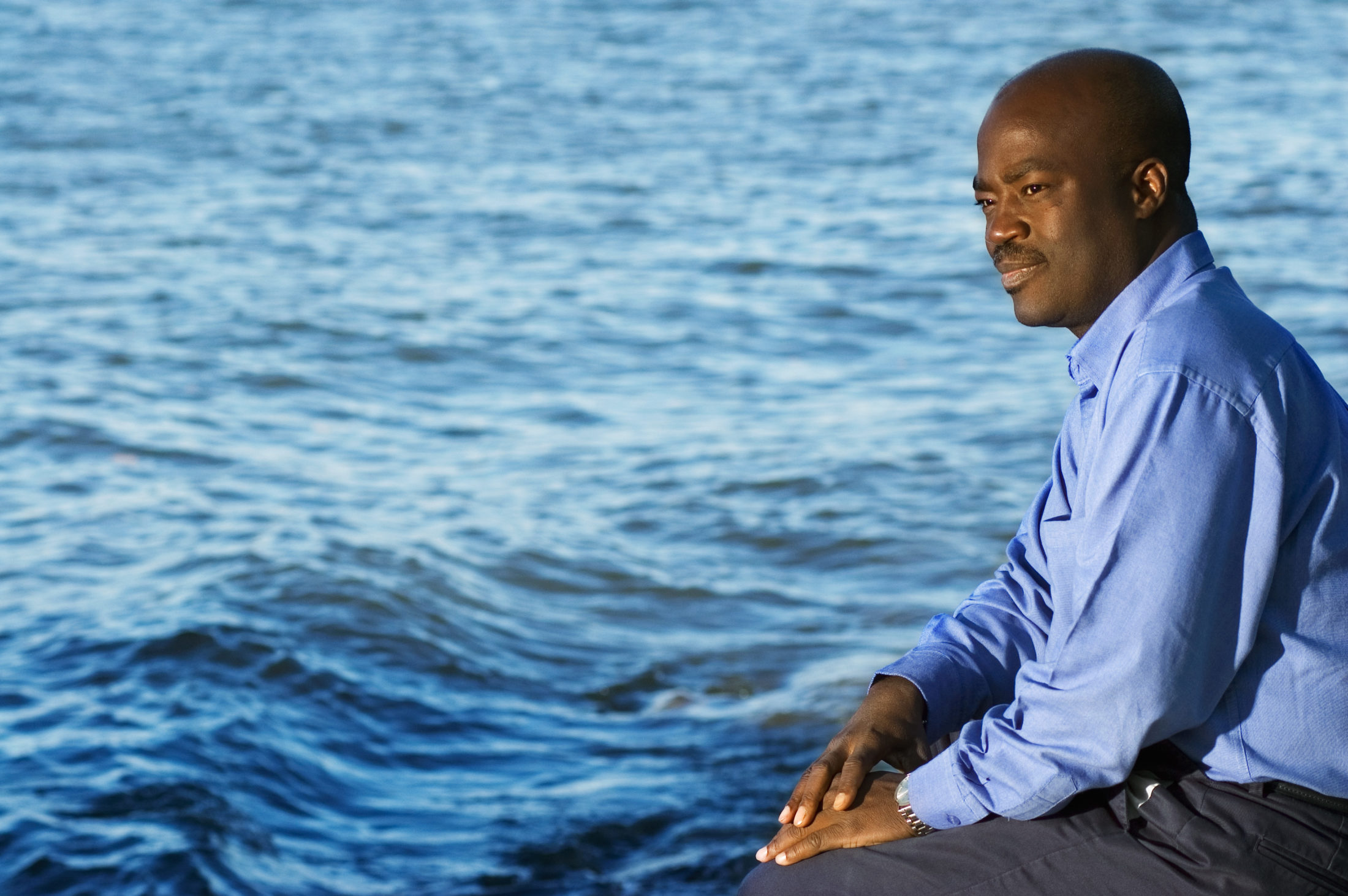 Rebuilding would result in gains for Pacific herring, losses for yelloweye rockfish

The species were selected for their role in commercial and recreational fisheries as well as their importance to First Nations. Apart from Pacific herring, they are all in decline, according to Fisheries and Oceans Canada. (However, groups such as Pacific Wild claim there is insufficient data to say Pacific herring is not in decline.)

The researchers considered if the fisheries were closed or if a low level of catch was permitted and if the fish had fast, slow or expected biological responses. The length of the closures and restriction periods depended on the species and speed of recovery, ranging from a few years to several decades. The researchers then projected the catch for each stock under each scenario for 30, 50 and 100 years and calculated the net benefit.

The Pacific herring fishery showed significant gains in every scenario. Costs associated with fishing for herring are extremely high, so any increase in the population will correspondingly increase profits.

Chinook, on the other hand, saw negligible economic gains or losses under the different scenarios because the species is slow to rebound and the fishery fetches an estimated $57.5 million per year. Closing the chinook fishery, even for just a few years, means those losses would have to be made up by increased harvests as the population rebuilds.

“If you leave nature alone, nature will come back … except if you destroy it completely.”

Rockfish showed losses under all of the scenarios. This is because the species has a significantly longer life cycle — about 18 years — than the other species studied. But Sumaila said that “given enough time and patience,” rockfish could recover enough to yield a positive economic benefit.

“When you have slow recovery, economists will tell you it’s not worthwhile. I really struggle with this,” he said. “If you leave nature alone, nature will come back … except if you destroy it completely.”

Sumaila points to the Norwegian spring spawning herring. In the 1980s, he said the fish population was reduced to “almost zero,” despite a 1970 moratorium being placed on harvesting the species during the spawning season. It took over 20 years for the population to begin to bounce back and now, 50 years later, the fishery is thriving once again.

Conservation scientist Michael Price said it’s hard to get people to look far into the future but agrees it’s necessary. “You do need to look at these longer timeframes.”

Price studied over 100 years of historical Skeena sockeye salmon data to build a better understanding of how a species responds over time. “There was a sockeye crash in the mid-1950s,” he said, “and 65 years later we’re seeing signs they have increased in abundance, but they’re nowhere near what they were in the 1940s.” 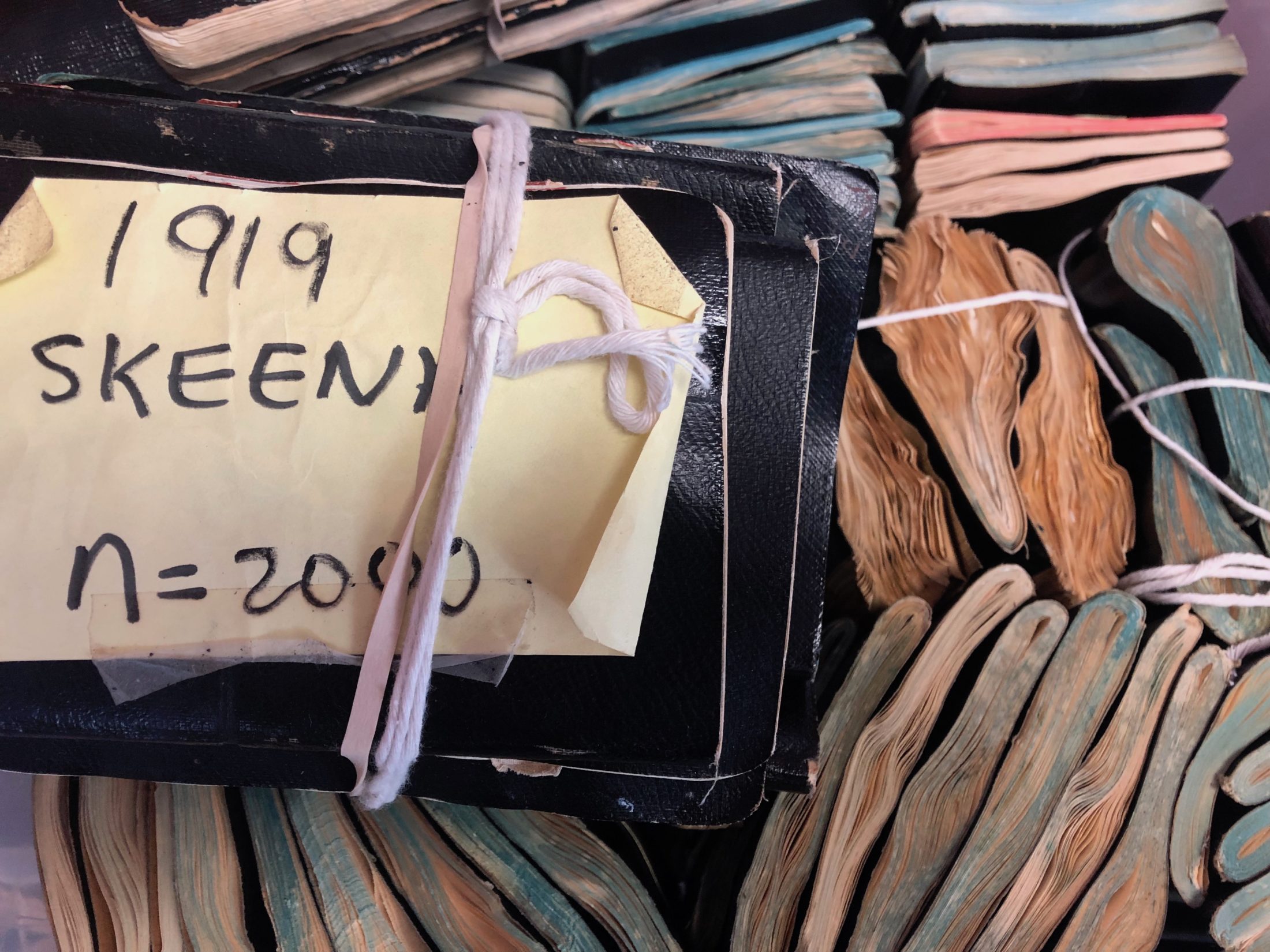 Conservation scientist Michael Price reviewed a century of Skeena sockeye salmon data, some of it contained in these old journals, to better understand how the species responds over time. Photo: Michael Price

Price is now studying salmon populations in Wet’suwet’en territory in northwest B.C., incorporating economics into the study in hopes it will have more impact with decision-makers. He said applying economic analysis to a conservation issue is “a step in the right direction.”

Economic modelling isn’t without limitations, Sumaila admitted, adding that there could be additional losses not accounted for, such as the loss of processing facilities and markets for species that aren’t harvested.

The six species in the study are all vitally important for supporting socioeconomic well-being in Canadian Pacific and Atlantic communities, according to the authors. The three Pacific fish species are particularly important as they play a key role in the social, cultural and food practices of First Nations.

However, they all face a range of threats. While the analysis assumed that fishing is the primary factor driving exploitation of fish stock populations, climate change, plastic pollution in oceans and industrial development both upstream in watersheds and on the coast are responsible for additional pressures on numerous fish species. As The Narwhal recently reported, Fraser River sockeye are currently experiencing one of the lowest returns on record.

“We’re having a hard time making a dramatic shift and saying enough is enough,” he said. “It’s almost like we’re waiting for the final blow to make that call. And then what else are you going to do except say there’s no fishing because there’s no fish?”

In June 2019, Fisheries and Oceans Canada (DFO) made a suite of changes to the Fisheries Act, including mandating that depleted fish stocks require rebuilding plans.

According to the federal agency’s 2018 Fisheries Sustainability Survey, only 58 of 177 major stocks assessed were at healthy levels.

In an emailed statement, the federal agency told The Narwhal its focus is on rebuilding stocks for the 19 species listed as critical on the survey, including Pacific and Atlantic herring, Atlantic cod and yelloweye rockfish. 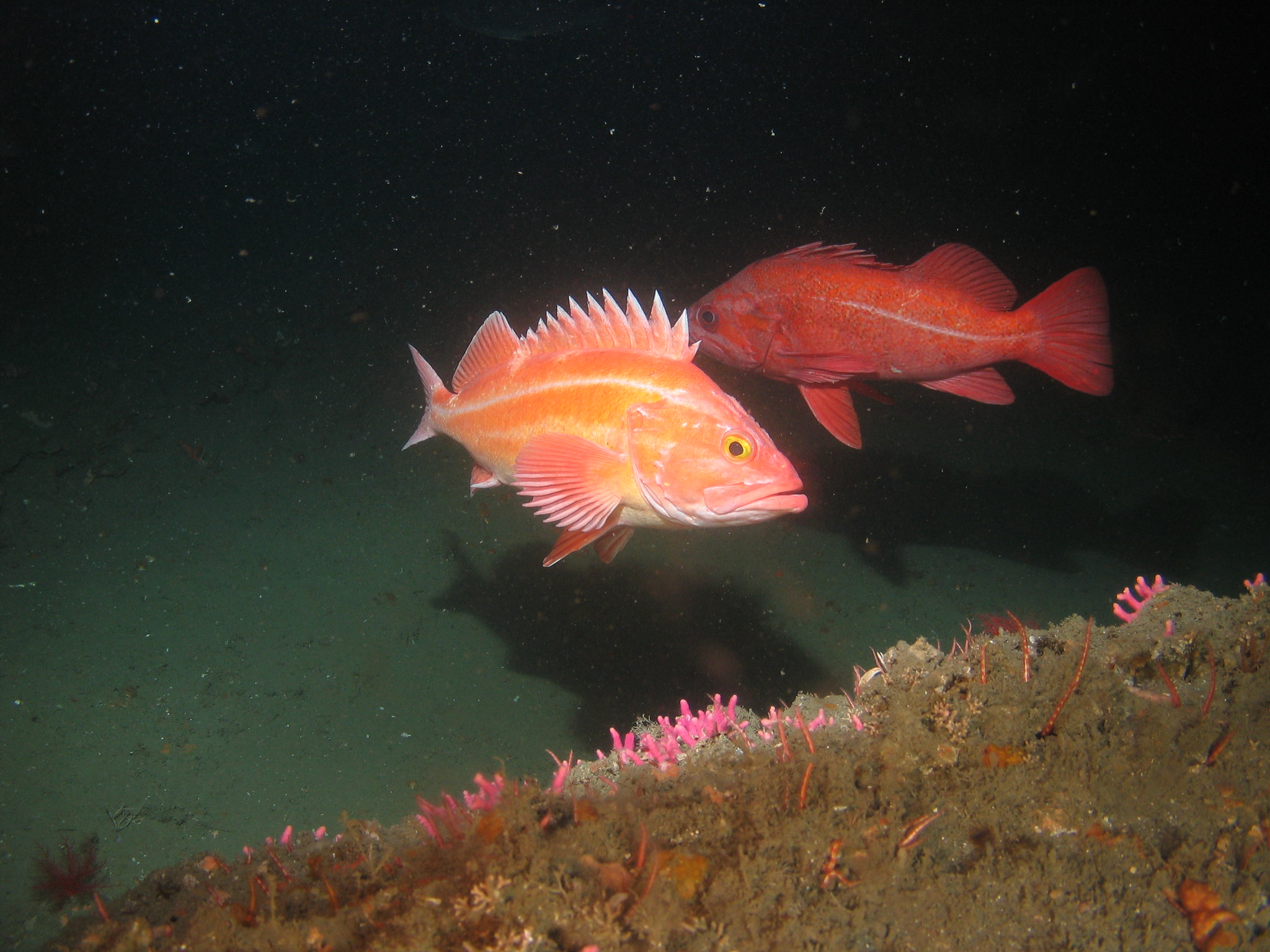 Since the 2018 survey, Fisheries and Oceans Canada has completed rebuilding plans for six species, and a further two have improved to the point where they are no longer in the critical zone.

“For the remaining priority stocks without rebuilding plans, DFO has specific fishery management measures in place, based on the best available science,” the statement said. “These measures will ensure that the limited fishing of the stocks does not compromise their rebuilding.”

In advance of the changes to the Fisheries Act, the federal government committed $107 million to support the rebuilding efforts. “To contribute to better managed fisheries, these resources will increase scientific capacity for stock assessment of Canada’s fish stocks,” the statement said.

This is important because 41 per cent of major fish stocks in Canada are classified as uncertain, which means experts don’t know enough about them to gauge whether their populations are healthy or threatened. Without additional scientific data, these species will continue to be harvested, albeit on a cautious basis.

Critics say the rebuilding plans that have been developed fall short, pointing in particular to an absence of legally binding requirements and a lack of specific management strategies.

Sumaila hopes people in the fishing sector can use the information from his study to pressure the government to implement the rebuilding plans that have been mandated.

He explained that it can be a hard sell to close an entire fishery for an extended period of time, but new organizations like the B.C.Young Fishermen’s Network are willing to listen.

“A lot of young people say, ‘Look, we want to be able to fish but in this smart, intelligent, sustainable way.’ It meets societal and food needs without wrecking the fisheries.”

Social and economic support for fishers key to rebuilding stocks

More than 5,000 fishers — about 12 per cent of all Canadian harvesters — are involved in the six stocks examined in the study and closing fisheries or setting catch limits can have a range of negative effects on them, from wiping out their income to harming their physical and mental health by eliminating an important food source and cultural practice.

Both Price and Sumaila warned that continuing to commercially harvest a declining fishery doesn’t ultimately help the fishers in the long term.

“Are we really doing people any favours by helping them limp along?” Price asked. “For salmon, some years there’s a commercial fishery, some years there isn’t — people are kind of just hanging on life support.” 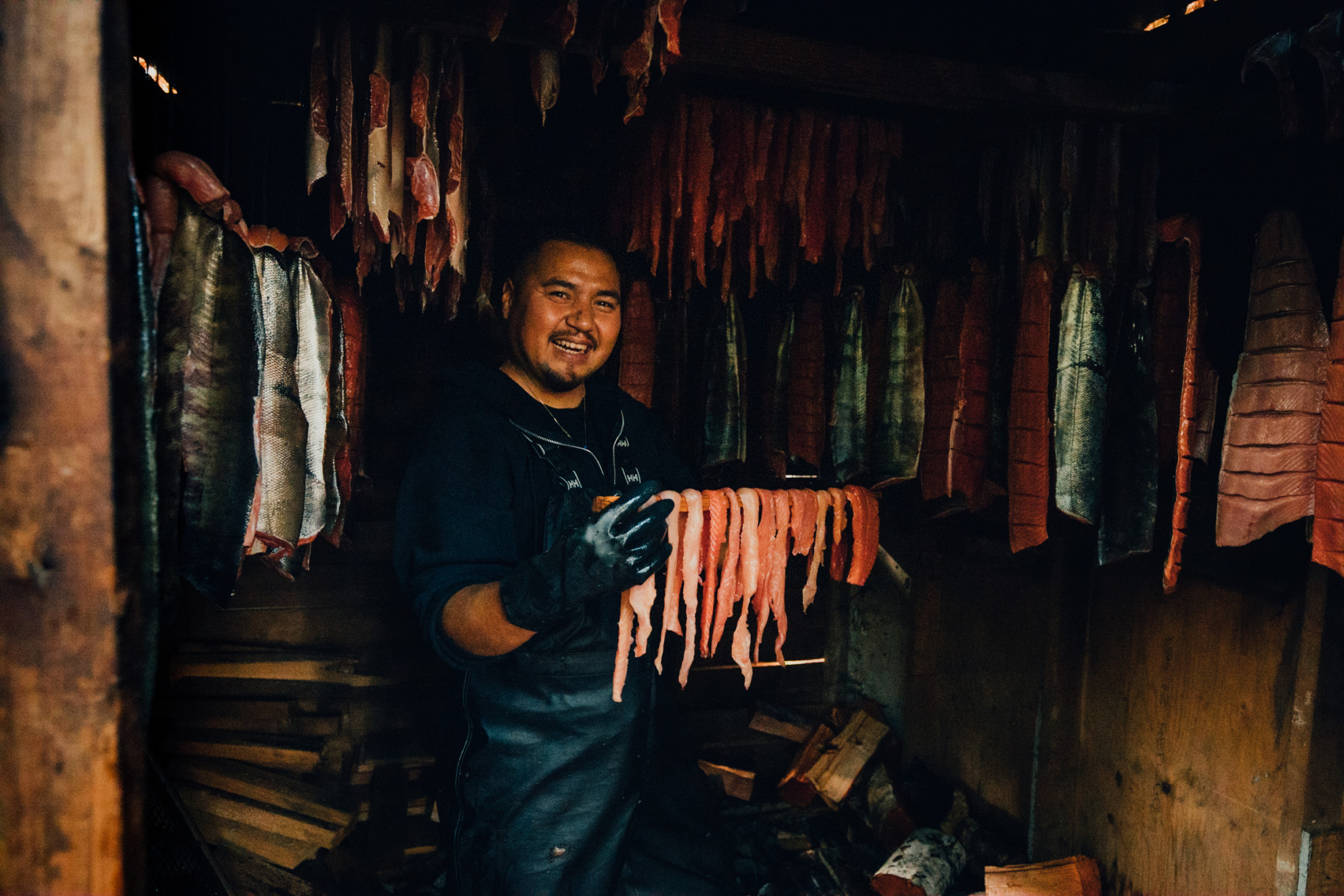 Fishing is a vital part of the food security, health, livelihoods and cultural practices of thousands of Indigenous people in Canada. Here, Troy Jack stands in a salmon smoke house in Bella Bella, B.C. Photo: Louis Whitehouse / The Narwhal

But both also agree there needs to be support for the industry.

To mitigate negative effects, Sumaila suggested the federal government implement economic and social assistance programs to help fishers transition out of fishing or provide them with alternative sources of income during the rebuilding period.

Sumaila said he was involved in a study of Hong Kong fisheries struggling with overfishing and over 75 per cent of the fishers surveyed said they would be happy to transition out of the industry given sufficient support. In that study, the transition model included supporting fishers to launch ecotourism operations and become whale- and dolphin-watching guides.

“If we could help people to find alternative jobs, this could lead to an amazing change, socially and ecologically. Meanwhile, we’re giving out subsidies to help them go farther and deeper,” he said, referring to subsidizing fuel costs for large-scale commercial fisheries.

Sumaila said closing a fishery for several years or decades will always be challenging, but the rewards are there waiting. “The ultimate goal is to stop harming the fish and their habitat and their ecosystem so they can regenerate year in and year out.”

From creating thousands of jobs in energy efficiency building retrofits to cutting the tax rate...

Will mining be the sleeping giant of Yukon greenhouse gas emissions?

So there’s going to be a fall election in B.C.: has the NDP kept its environmental promises?

The NDP rose to power in 2017 vowing to take action on climate change, old-growth...