The coming federal election is an opportunity for Canadians to have a say in the future of climate policy in Canada — and politicians should take note
By Matto Mildenberger and Erick Lachapelle
This article was originally published on The Conversation.
Share
Canadians from every riding across the country except three report feeling the effects of climate change where they live, according to new research. Photo: Samuel Charron / Unsplash

Canada is gearing up for a big election this fall and climate policy will likely be at the centre of debate. Prime Minister Justin Trudeau’s Liberals are trumpeting their carbon pricing policy, while Andrew Scheer’s Conservatives want to get rid of it. Meanwhile, Elizabeth May and her newly relevant Greens think Canada must do more to manage the climate crisis.

But where do Canadian voters stand on this issue?

Our research team, based at the Université de Montréal and the University of California Santa Barbara, has new public opinion data to answer this question.

Using recent statistical and political science advances, we can estimate Canadian opinion in every single riding across the country (except for the less densely populated territories, where data collection is sparse). And we’ve released on online tool so anyone can see how their local riding compares to others across the country.

Canadians are concerned about climate change

Our results reinforce what is increasingly clear: climate change is on the minds of Canadians, and not just in urban or coastal communities. A majority of Canadians in every single riding believe the climate is changing. The highest beliefs are in Halifax, where 93 per cent of the public believe climate change is happening.

A majority of voters supports emissions trading. Carbon taxation is more divisive, yet more people support carbon taxation than don’t in 88 per cent of Canadian ridings.

And the handful of ridings that don’t support the Trudeau government’s carbon pricing policy — Fort McMurray-Cold Lake, for example — are already in Conservative hands.

Compared to the United States, the Canadian public believes climate change is happening in far higher shares. Even Canadian ridings where belief in climate change is the lowest have comparable beliefs to liberal states like Vermont and Washington.

Importantly, support for specific climate policies remains high in provinces that have already implemented climate laws. For instance, support for a carbon tax in British Columbia, where this policy was introduced in 2008, is the second highest in the country at 61 per cent (Prince Edward Island has the highest support). Similarly, support for emissions trading is second highest in Québec, again just behind P.E.I., where a carbon market was implemented in 2013.

We don’t find evidence of a backlash to carbon taxes or emissions trading — Canadians living in provinces with substantive climate policies continue to support them. Instead, we find substantial support for climate action in the ridings of Canadian politicians who have done the most to undermine Canada’s climate policy.

Ontario Premier Doug Ford’s provincial riding matches up with the federal riding of Etobicoke North, where 62 per cent of the public supports emissions trading. In other words, Ford ignored the majority will of his own constituents when he acted to repeal Ontario’s policy last year. 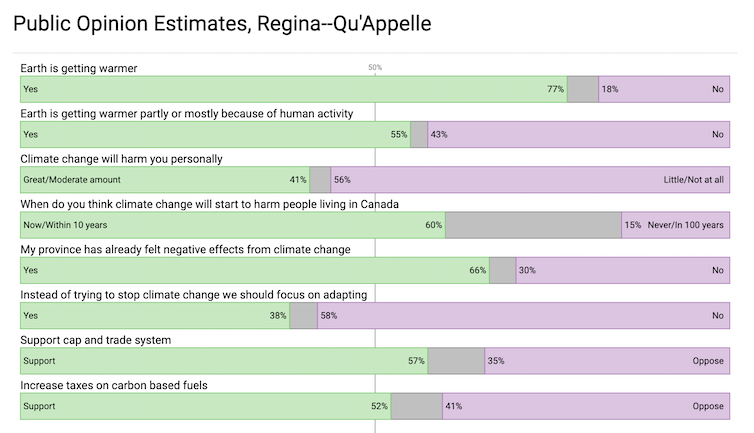 The same is true federally. In Scheer’s own riding of Regina-Qu’Appelle, support for carbon taxation is at 52 per cent. Only 41 per cent of Scheer’s own constituents oppose a carbon tax. He too is offside with the people he represents.

Our results emphasize how the media can sometimes misinterpret electoral mandates. In Ontario, Doug Ford promised to repeal the province’s emissions trading scheme — and won. But the former Conservative leader, Patrick Brown, supported carbon pricing while enjoying a comfortable lead in the polls.

There are lots of reasons why Canadians choose to change their government, but opposition to carbon pricing hasn’t been one of them.

Climate science is clear on the need to rapidly decrease greenhouse gas emissions to avert the most disastrous consequences of climate change. As a northern country, climate impacts in Canada are already larger than in other places.

Our research, which the public can explore, shows that Canadians everywhere — from the most Conservative to the most Liberal ridings — are united in understanding that climate change poses a major threat to the people and places they cherish. The coming election will provide an opportunity for Canadians have a say in the future of climate policy in their country — and all Canadian politicians should take note.

This article is republished from The Conversation under a Creative Commons license. Read the original article.

Banner: Canadians from every riding across the country except three report feeling the effects of climate change where they live, according to new research. Photo: Samuel Charron / Unsplash