The CFIA’s PR War On Salmon: Internationally Renowned Canadian OIE Research Lab Loses The Battle They Shouldn’t Have to Fight

By Elizabeth Hand
Share
Early detection of a lethal virus in salmon won’t win you any gratitude in Canada, but it could get you internationally discredited. That’s what happened Dr. Frederick Kibenge and associates at his lab at the Atlantic Veterinary College of Prince Edward Island when he positively identified the presence of the Infectious Salmon Anemia Virus (ISAv) in samples taken from B.C. fish.
Dr. Kibenge, internationally renowned expert on the ISA, runs one of only two independent research labs recognized by World Organization for Animal Health (OIE). His lab is responsible for diagnosing Chile’s fish farms with the ISA in 2007. The virus was tracked back to eggs originating in Norway. When he detected the ISA virus in B.C. salmon, he found that he was up against more than just a lethal epidemic—he had to fear for his scientific credibility.
Because of his findings, “Dr. Kibenge was subpoenaed to testify at the Cohen Commission. In December 2011, he told he Commission about the positive test results for ISA virus sequences he obtained from Rivers Inlet Fraser River Salmon.” The CFIA claimed that because his lab could not recreate the original results, his international certification ought to be revoked.
Simon Fraser University’s Dr. Rick Rouledge, Professor and Fisheries Statistician started the ball rolling in 2011 when he noticed that the River’s Inlet Sockeye populations were very low. He suspected something like a virus and sent some samples in for testing. The tests came back positive for the ISA virus.
In order to be absolutely certain, he and his colleague, biologist Alexandra Morton, sent the samples away to the two most credible research labs in the world for ISA virus testing—Dr. Kibenge’s lab in PEI and Dr. Are Nylund’s lab in Norway.
Once the Canadian Food Inspection Agency (CFIA), a governing body responsible for public food safety, got wind of the announcement that the lab found ISA in B.C. fish, they rushed to the scene to conduct their own tests.
The tests the CFIA ran found no trace of the virus. However, according to Morton, the tests they used “[have] never worked to identify ISA.” In her documentary, Salmon Confidential, she maintains that the technique “virus isolation” is only useful if the virus is found alive and is cultured. Samples would have to be from an active disease outbreak “on a farm where the fresh sample of a farmed salmon could be rushed to a lab very quickly.”
Of all of the labs that conducted tests on the fish samples, the government tests were the only ones to come back entirely negative.
Because the virus that Dr. Kibenge identified is a precursor to the full-fledged outbreak of ISA, his results are not evidence of the virus in the eyes of the CFIA. His lab found pieces of the virus in the Fraser River samples, which indicates that the fish are carriers for the virus. Unless an outbreak is identified through virus isolation, “Canada does not even see these samples as suspect,” Morton said in a recent blog post.
The CFIA decided to audit the lab after the findings were made public at an SFU press conference in October 2011. The lab was audited again in August by a government appointed independent panel and the OIE. The Globe and Mail reported that CFIA requested that the OIE “place the reference laboratory status at the Atlantic Veterinary College in abeyance.”
Dr. Kibenge stands by his research, however, and feels that he is being penalized for producing inconvenient results. “What they are doing here is essentially punishing me for having testified at the Cohen Commission and trying to suppress the findings that we’ve been finding. It’s an attack on my credibility,” he said. “There is nothing here that I can see that I’ve done wrong.”
This early detection could prevent a major ecological disaster, but it won’t protect the salmon feedlot industry from trade disruption. British Columbia is known for salmon. The Fisheries Statistics for 2008 estimate that salmon had a total farmgate value of about $428 million per year. It’s well known that international trade of this product would be shut down by documention of ISA in farmed and wild BC salmon. The US and China are massive markets for B.C. Salmon and these countries explicitly reject the importation of diseased animals.
It’s clear that industry is the main consideration. The CFIA’s, Kim Klotins’ Cohen Commission testimony sheds light on the agency’s primary concerns and what they think their “role” is. “So if, lets say, we do find ISA in B.C.,” she said. “And all of a sudden markets are closed, our role is to try to renegotiate market access to those countries. If we can’t meet [their requirements] then there will be no trade basically.”
During the Cohen Commission, an internal email revealing the PR intentions of the CFIA was leaked. The email clearly states that once Kibenge’s lab lost its OIE credibility the agents responsible were self-congratulatory. The email reads: “One battle is won, now we have to nail the surveillance piece and we win the war, also.” 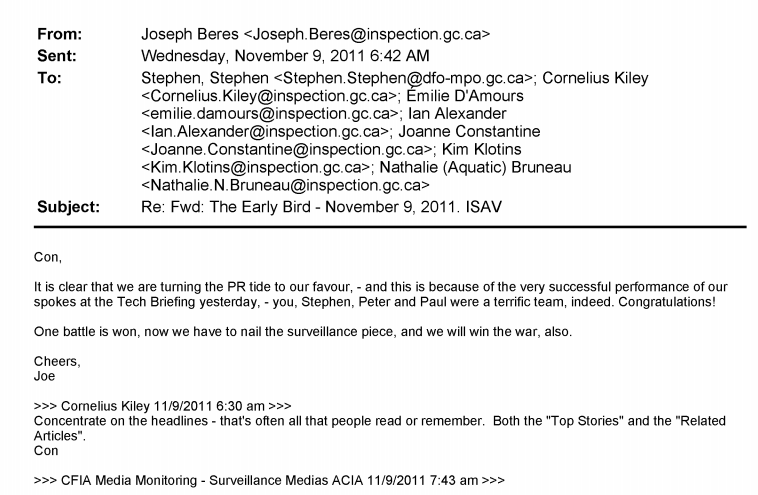 Dr. Kibenge and Alexandra Morton didn’t know that they had taken up the pursuit of a war, but it appears they aren’t the only opposition in a war that had been waged against science. “Three Canadian government labs: Ms. Nelle Gagne, DFO’s lab at Moncton, N.B.; Dr. Kyle Garver and Dr. Kristi Miller, DFO lab in Nanaimo; and Dr. Are Nylund at the University of Bergen in Norway have also reported finding ISA virus sequences in B.C. salmon during the Cohen Commission.” These scientists’ findings were also disregarded.
An outbreak of ISA in B.C. could hurt more than just our pocketbooks. Unlike Chile, which suffered a primary financial crisis due to the ISA virus, salmon is a large part of the local ecological food chain in B.C. A threat to the viability of the fish puts many other species at risk. Dr. Routledge, for one, is fearful of what this virus will do to the unique local ecology.

“Nobody knows what happens when you introduce a virus into a popluation that hasn’t been exposed to it before. It might be totally benign or it might have a devastating impact like smallpox on the Aboriginal popluations in North America.”

*images used with permission from Alexandra Morton
We hear it time and time again:
“These are the stories that need to be told and you are some of the only ones telling them,” John, a new member of The Narwhal, wrote in to say.

Elizabeth Hand
Elizabeth Hand is a novelist and educator in the fields of writing and science. She holds an MFA in Creative Writing from the Univ...