Former B.C. premier Christy Clark — who promised to build a lucrative liquefied natural (LNG) industry in the province — is taking her efforts across the border.

Clark is on the board of directors of AlaskCan LNG, a new company that wants to build a US $12-billion floating LNG export terminal in Alaska waters and export up to 12 megatonnes of B.C. natural gas to Asia every year, according to the company’s website.

In a January interview with Alaska Public Media, AlaskCan president Byng Giraud said the company hopes to capitalize on natural gas trapped in northern B.C. Prior to starting AlaskCan, Giraud was CEO of Woodfibre LNG, an export terminal approved for southwest of Squamish, B.C.

While it’s unclear how the natural gas would get to the proposed terminal, one possibility is the Prince Rupert Gas Transmission pipeline, a TC Energy project that was approved in 2014 but hasn’t been built.

The pipeline was originally intended to feed the Pacific NorthWest LNG plant on Lelu Island near Prince Rupert, but Petronas cancelled the strongly contested project in 2017. The approved route of the 900-kilometre pipeline passes the site of the proposed AlaskCan terminal, roughly 60 kilometres away from Lelu Island.

“We like the Alaska side, partially because it makes the pipeline shorter — saves about 60 kilometres,” Giraud told Alaska Public Media, suggesting that the Prince Rupert Gas Transmission pipeline may indeed be a candidate. 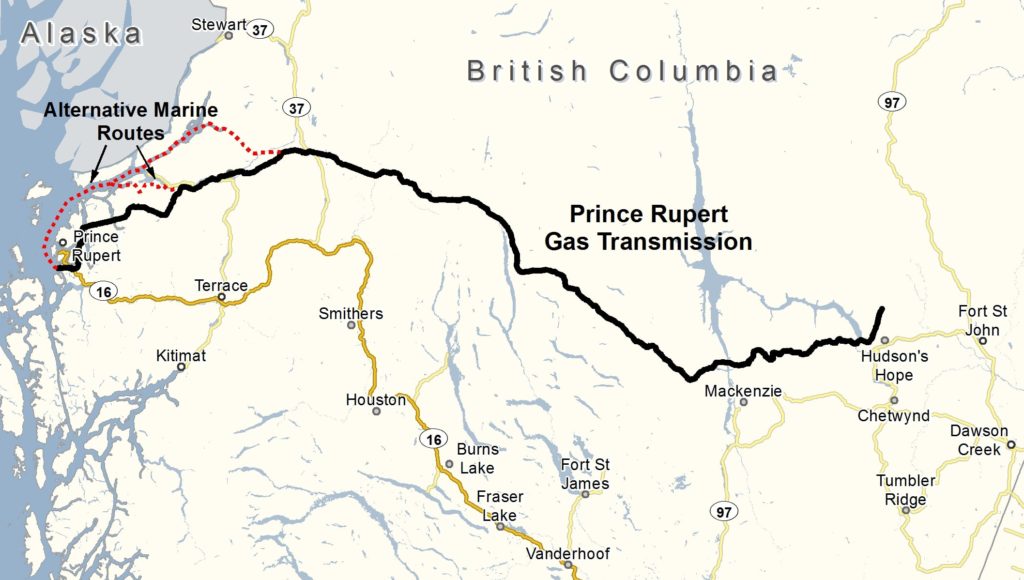 As The Narwhal recently reported, TC Energy extended its environmental assessment certificate last year and is applying for an extension to its BC Oil and Gas Commission permits this fall. The Narwhal asked TC Energy for comment on its motivations for extending its permits, but the company did not respond.

The Narwhal also reached out to Giraud and Clark for comment, but neither responded.

Clark has been a driving force behind LNG projects in the province. Her Liberal government, which was in power from 2011 to 2017, promised to have three LNG facilities built and operating by 2020, but not one has come to fruition. The LNG Canada terminal in Kitimat is the only one under construction and is expected to open in 2025. Construction on the Woodfibre LNG project was supposed to start this summer but was delayed in part due to COVID-19.

A Globe and Mail investigation revealed Giraud made personal financial donations to the Liberals’ 2017 election campaign and was later reimbursed by Woodfibre, an illegal lobbying practice under the B.C. Elections Act.

The 2017 scandal  included many individuals and companies and prompted an investigation by the RCMP, which concluded earlier this year. No charges were laid, and many of the lobbyists filed correction notices with BC Elections to reveal the true source of the donations.

The LNG Canada project in Kitimat, B.C., is the only LNG terminal under construction in the province. Photo: Garth Lenz / The Narwhal

Clark left politics in 2017, after the NDP and Green Party joined forces to create a minority government and defeated her Liberals. She is now a senior adviser with Canadian law firm Bennett Jones, which claims on its website to have been “intimately involved in virtually every major energy development project in Canada in the past 20 years, representing project proponents, investors and other stakeholders.”

Donald Gutstein, a former professor of communications at Simon Fraser University and author of several books on the intersection of corporations and politics, noted the connection between Giraud and Clark.

“She’s longtime buddies with Byng Giraud who was pushing Woodfibre LNG during her administration,” he wrote in an email.

Eoin Finn, a retired KPMG partner who has spent several years studying the benefits and risks of B.C.’s LNG industry, said Clark could help the fledgling project in several ways.

Finn pointed to her connections to funders — banks and private equity firms — and Calgary’s oil and gas inner circle. “As the gas for AlaskCan would come from B.C. and Alberta, intros to that circle would be key to sourcing supply and building the feeder pipeline,” he wrote in an email.

“While premier, Christy headed several trade junkets to those countries, so is familiar with the key players, though that info may be a little dated,” he said, adding that Bennett Jones has a Beijing office.

Bennett Jones could also help with legal and Indigenous matters related to the pipeline and the ocean transit of LNG tankers, which would be in Canada’s jurisdiction, Finn added.

Joining Clark on the board is Nathan Gloag, who worked with Giraud at Woodfibre, and Donald McInnes, director and co-founder of Sun Metals, which is proposing to build a copper-gold mine in northwest B.C.

U.S. LNG terminals approved and online faster than those in Canada

In the Alaska Public Media interview, Giraud said one of the reasons for building a terminal in Alaska is the state “has a fairly clear and robust permitting process.”

So far, projects in the U.S. have been approved and come online faster than those in Canada.

The U.S. already has six LNG terminals up and running, exporting fracked gas from American deposits. In late 2019, three additional terminal projects in the U.S. were given the green light. This May, a major LNG project in Alaska also received federal approval. Alaska LNG will transport gas from northern Alaska deposits through a 1,200-kilometre pipeline and process the gas for shipping at a terminal near Anchorage. An offshore liquefaction terminal in Alaska’s Arctic, Qilak LNG, has also been proposed.

But while the U.S. is shipping natural gas to China again after a trade war between the countries, the LNG market has seen better days. Even before the pandemic, prices were at an all-time low. The coronavirus pandemic drove them down even further, making it uneconomical to export the gas.

In a July report on the LNG industry, the Global Energy Monitor listed 29 terminal projects around the world that have either been cancelled or are in dire straits. The nonprofit research organization cited the pandemic, the Wet’suwet’en opposition to the Coastal GasLink pipeline and recent studies debunking the idea of LNG being clean energy for the downturn.

While AlaskCan’s emissions would not be counted in B.C. since the terminal is in the U.S., the process of getting the gas out of the ground and transporting it by pipeline accounts for the majority of LNG life cycle emissions.

For instance, the LNG Canada project would produce nine megatonnes of upstream greenhouse gas emissions compared with four megatonnes of emissions at the terminal, according to a recent Canadian Centre for Policy Alternatives report.

According to the report, if all three of B.C.’s approved LNG terminals go ahead, the province is on a path to exceed its 2050 climate target by 227 per cent. B.C. would be on the hook for all upstream emissions associated with the AlaskCan project, further contributing to the challenges of meeting provincial climate targets.

AlaskCan could be met with strong opposition in B.C.

If AlaskCan does intend to use the Prince Rupert Gas Transmission pipeline, the project will see significant opposition in B.C., according to locals who would be affected.

“There’s never been an environmental reason to do the pipeline, and now with the price of oil and gas in the dumpster, there’s definitely no economic reason for it,” Kispiox Valley resident Gene Allen told The Narwhal.

Residents of the Kispiox Valley, which the pipeline would pass through, strongly opposed the project when TC Energy was working through the environmental assessment. A diverse mix of loggers, farmers, guide outfitters and more signed a declaration of opposition to protect the Skeena River ecosystem.

“The Kispiox Valley has more biogeoclimatic regions than any other place in Canada,” Shannon McPhail, director at Skeena Watershed Conservation Coalition, told The Narwhal in an email. “It’s a globally significant place.”

On the coast, opposition to the pipeline’s original terminus, the Pacific NorthWest LNG terminal project, included Hereditary Chiefs and members of the Lax Kw’alaams First Nation, which rejected a $1.15-billion offer from Petronas in exchange for their support and set up camps on Lelu Island, affirming their rights to protect their traditional territory. The main concern voiced by the nation was the potential impact on salmon at the terminal site and through increased shipping traffic.

The AlaskCan LNG terminal would be closer to the Lax Kw’alaams First Nation than the Pacific NorthWest terminal but beyond its recognized territory, which could complicate any legal grounds for opposition.

Any project proposed along the north coast — regardless of which side of the border it’s on — will also come under scrutiny by the fishing community.

Alaska’s commercial and sport fishing industries are vital parts of the state’s economy. According to the Resource Development Council for Alaska, the seafood industry produced more than US $5 billion in economic activity in Alaska every year.

While AlaskCan may have Clark to help attract investors and navigate politics, it seems unlikely it will escape opposition by being on the U.S. side of the border.

Banner: Former B.C. premier Christy Clark, shown here at a Woodfibre LNG announcement, is on the board of AlaskCan LNG, a company headed by former Woodfibre CEO Byng Giraud. Photo: Province of British Columbia / Flickr
We hear it time and time again:
“These are the stories that need to be told and you are some of the only ones telling them,” John, a new member of The Narwhal, wrote in to say.