Democracy in the Pits: How Canada Uses Foreign Aid as PR for Mining Companies

Democracy in the Pits is a two-part series outlining the tarnished reputation of Canada's mining sector and the Harper government's role in supporting it. Read Part 1: The Corrosive Effect of Canadian Mining Companies Worldwide.

When your industry finds itself faced with a deteriorating reputation after its harmful practices have been exposed to the world, you have two available courses of action. The first is the honorable route: take the concerns of the public seriously, listen to the relevant experts, and figure out how to fundamentally change the way you do business. Admitting your mistakes and putting an end to your violent or unscrupulous behavior may be the first step to recuperating your standing in the community, even if damaged trust does take a long time to rebuild.

The second option is damage control. Rather than accept the fact that social, environmental and economic justice may pose legitimate constraints on your industry’s profitability, forge ahead with business as usual while trying to manage public opinion. This can be accomplished in a number of ways, ranging from discrediting your detractors to devising a flashy but shallow community engagement campaign, changing the style but not the substance of your actions.

Both of these responses fall under the rubric of corporate social responsibility. But while the first takes seriously the idea that a company requires a social license to operate, and has duties to the human community beyond earning a profit for its shareholders, the second only sees unprofitable distractions and collateral damage.

When a 2005 parliamentary report and a report compiled following the 2006 Corporate Social Responsibility Roundtables recommended that a tough legal framework be established to govern the conduct of the extractive industry, Canadian mining companies decided to band together to pursue the second option. Although the evidence clearly showed that their business model was displacing communities, poisoning water supplies and often resorting to organized violence to suppress dissent in developing countries, the mining sector felt that any kind of binding legal sanctions to clean up the industry would impose an unfair burden on their business.[view:in_this_series=block_1]

Following through on the policy recommendations detailed in the two reports would have meant taking real action to clean up the industry. It would have meant that the people responsible for committing criminal abuses including murder and rape would face justice. Since new regulations would have affected all Canadian mining companies equally (and since over 75% of the world’s mining companies are based in Canada), a new binding legal framework would have ensured a level playing field.

But rather than take the reports’ conclusions to heart, members of the mining industry initiated a series of meetings with representatives from the non-profit sector, which would eventually culminate in the formation of a group called the Devonshire Initiative. The aim of the collaborative effort between these two unlikely partners was to forge an alternative to the framework recommended by the two reports, particularly by engaging the government as a partner rather than as a rule-enforcing authority. According to the organization’s website, “The objective of the Devonshire Initiative (DI) is improved social and community development outcomes wherever Canadian mining companies operate overseas.” 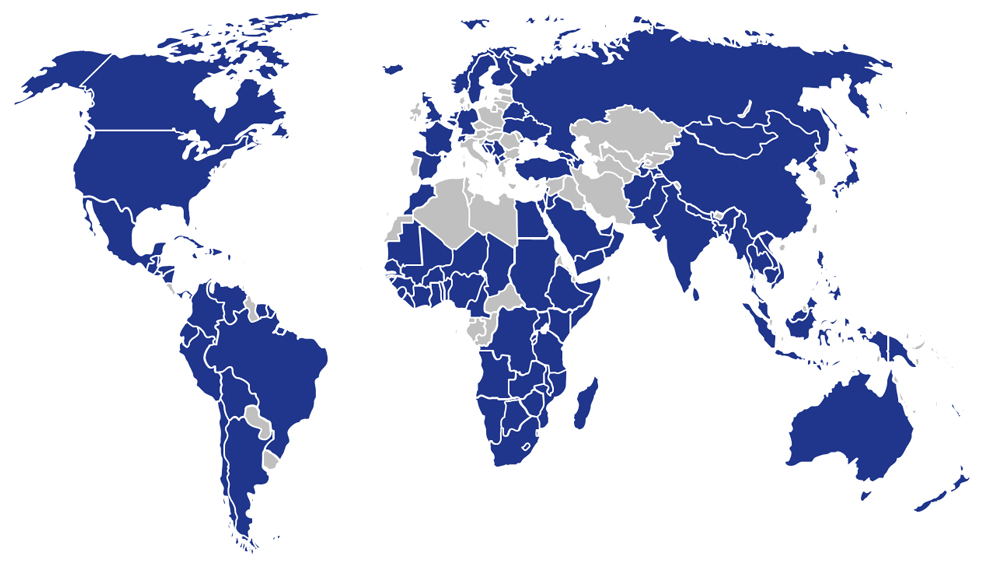 The DI counts a number of high-profile companies and NGOs among its members. On the NGO side, the membership includes World Vision Canada, Save the Children Canada and Engineers Without Borders Canada. On the corporate side, mining heavyweights Barrick Gold, Goldcorp Inc. and Rio Tinto Alcan have all signed on.

At first glance, the premise sounds like it could have some potential. Since mining companies are naturally competent in the field of resource extraction, and development NGOs have on-the-ground expertise leading community projects in developing countries, bringing the two together should help to resolve some of the problems plaguing overseas mining operations. Yet there is a conspicuous lack of discussion of accountability or legal frameworks—in other words, the responses necessary for dealing with rampant criminality and environmental destruction.

When it comes to any discussion of the problems that the DI was formed to address, the language is kept vague and corporate. We are told that, “There is increasing dialogue around corporate social responsibility and best practices in sustainable community development.” There is brief mention of the “complex problems facing mining and development.” In a final flourish of high-gloss rhetoric, readers are assured that, “The realities of mining’s impact in Canada and overseas, combined with the silos of knowledge and experience, all suggest an opportunity to “do mining better,” together.“

All of this would fall somewhere between relatively harmless and potentially beneficial if it were the mining companies themselves who would be footing the bill for their planned collaboration with development NGOs. They were riding high on an unprecedented commodities boom at the time the DI was conceived, so adequate funding was hardly an issue. But the members of the DI opted to lobby the Canadian government to provide them with funding and support through the Canadian International Development Agency (CIDA). Mining companies wanted money that was earmarked as official development assistance (ODA) to fund their corporate social responsibility initiatives on the ground, all without submitting to any new rules or regulations.

As outlandish as the idea sounds, the Devonshire Initiative’s preferred approach to extractive industry governance found a sympathetic ear in the Harper government. In a 2009 report entitled “Building the Canadian Advantage: A Corporate Social Responsibility (CSR) Strategy for the Canadian International Extractive Sector,” the Harper government outlined a policy that would allow CIDA to engage in development projects that directly benefit the mining industry.

According to Catherine Coumans of MiningWatch Canada, “This strategy provided policy cover for the first time for the government to put ODA directly at the disposal of the extractive sector.”

CIDA rolled out its new vision of development with $6.7 million in funding for three pilot projects that brought together mining companies and development NGOs: World Vision and Barrick Gold in Peru, World University Service of Canada and Rio Tinto in Ghana, and Plan Canada and IAMGOLD in Burkina Faso. On top of this was a $20 million fund for a program called the Andean Regional Initiative for Promoting Effective Corporate Social Responsibility, a development fund focused on the Andean region.

But the fund came with a catch: NGOs could only apply for projects if they were partnering with a mining company.

If these projects sound like the beginning of the end for an agency whose explicit mandate is poverty reduction and support for international development, that’s because they were. In 2013, omnibus budget Bill C-60 legislated the end of CIDA as an independent agency, folding it into the Department of Foreign Affairs and International Trade to create a new hybrid department: the Department of Foreign Affairs, Trade and Development (DFATD).

Under the newly created DFATD, decisions about how to utilize Canadian developmental assistance are now subject to one overarching criterion: their relevance to Canada’s commercial interests. But even before the official merger, CIDA had produced a report called “Reviewing CIDA’s Bilateral Engagement,” which prioritized countries with natural resources or significant Canadian investment potential as top destinations for development assistance. 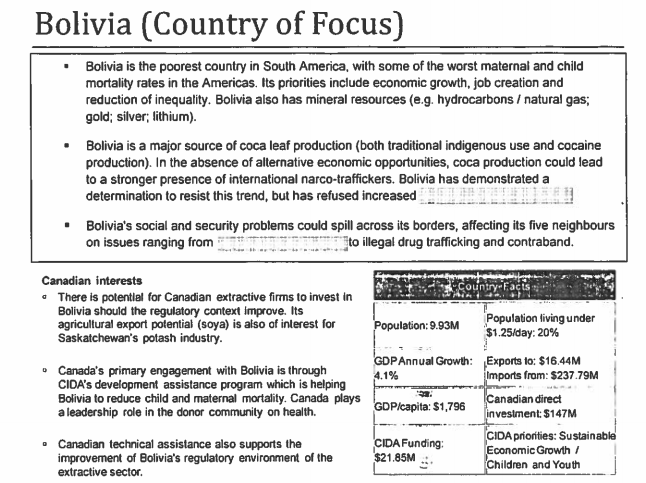 With Canada's international standing already in freefall thanks to moves like Harper's withdrawal from the Kyoto Protocol and the UN Convention to Combat Desertification, the new direction in Canadian aid spending only makes matters worse.

As CIDA founder Maurice Strong put it in a Globe and Mail editorial, "The commercialization of our development funding further discredits Canada's commitment to supporting the progress of developing countries."

In flagrant contravention of the Official Development Assistance Accountability Act that came into effect in 2008, as well as the 2005 Paris Declaration on Aid Effectiveness, Canada no longer takes poverty reduction and the perspectives of the poor as the primary factors to consider in choosing how to implement development funds. Instead it comes down to naked, cynical self-interest, a point the Conservatives have tried to sell as common sense. After all, why would we spend Canadian money overseas unless it brings direct material benefit to Canadians?

The problem is, the only “Canadians” who benefit from DFATD’s Orwellian redefinition of what constitutes development assistance are the mining companies and their shareholders. The very same companies who have been accused of egregious crimes in developing countries now receive free community engagement services from the government. They haven’t changed their business practices, and they aren’t constrained by any new laws. But they now receive extensive subsidies to pursue corporate interests.

In a time of generalized austerity, when ideological attacks on labour unions and public health care endlessly repeat the message that there isn’t enough money to pay for a decent standard of living for all Canadians, the public money to subsidize some of Canada’s wealthiest corporations is readily available.

And the generosity shows no signs of slowing: $25 million in federal funding for the new Canadian International Institute for Extractive Industries and Development (CIIEID) is only the latest example of the Harper government paying to improve the image of mining companies.

Just as the resource curse works to keep countries in the developing world trapped in poverty, so does the wealth and power of the Canadian extractive industry corrode our democracy.

David Ravensbergen’s writing has appeared in Discorder, The Tyee, the Montreal Review of Books and the Montreal Mirror. Originally from…

We are speechless: thanks for your support in these tough times

Amid the coronavirus pandemic, 185 readers stepped up over the course of a week to...

‘I don’t see why anything should be secret’: First Nation rejected $28 million in Site C dam deal, court docs reveal

Documents disclosed in a treaty infringement case offer a rare glimpse into the payments BC...