‘The magnitude of change is enormous’: researchers track coastline of Herschel Island for a better understanding of how permafrost loss to seawater could contribute to carbon dioxide in the atmosphere
Julien Gignac, Local Journalism Initiative reporter
Jun 16, 2020
6 min read

Researchers are looking toward Herschel Island, the northernmost point of Yukon, to understand how coastal erosion is contributing to the release of carbon dioxide into the atmosphere.

Erosion across Arctic coastlines has become something of a truism. But it could be the sleeping giant of carbon dioxide release, which, in turn, leads to a warmer planet.

Herschel, a 116-square-kilometre island made up of mostly permafrost, is receding by roughly one metre per year, said Hugues Lantuit, a researcher with the Alfred Wegener Institute for Polar and Ocean Research. On one stretch of the island, which is located off the Yukon coast in the Beaufort Sea, researchers believe erosion is happening at up to 15 metres per year.

“We see that for the entire coast of the Yukon,” Lantuit said. “The Yukon is losing territory.”

This makes it an ideal place to research the relationship between permafrost erosion and carbon dioxide production.

Join our newsletterIn-depth reporting straight to your inbox
Sign up

Permafrost holds huge stores of carbon —  it’s made up of layers of compounded plant and animal matter that’s been encased in the ice-sediment mix for thousands of years. In a frozen state, this carbon-rich matter doesn’t decay to create carbon dioxide. But as permafrost meets warmer temperatures and crashing waves, a thaw follows, allowing carbon dioxide to be produced.

Along the coast and in nearshore waters, this production is happening at a faster rate than on land, researchers have found.

By 2100, carbon dioxide that’s likely to be produced from thawing permafrost across the circumpolar Arctic could contribute 0.3 degrees to global warming, Lantuit told The Narwhal. This estimate doesn’t even include the possible release of carbon dioxide from coastal erosion.

The United Nations Intergovernmental Panel on Climate Change report doesn’t account for carbon dioxide released by permafrost in general, Lantuit added. That report, released in 2018, says that warming must not exceed 1.5 degrees in order to stem more extreme weather, rising sea levels and poverty. But there haven’t been adequate monitoring tools to gauge how permafrost erosion is contributing to this problem.

What eroding coastal permafrost could unlock

To understand the levels of carbon dioxide released from the eroding coastlines, Lantuit’s team mixed samples of permafrost from Herschel Island with seawater, and left them to degrade for four months. The goal was to simulate the natural environment and process of erosion in the area.

From this, researchers found there was a 50 per cent increase of carbon dioxide production in samples left at 4 C and a 15 per cent increase in samples at 16 C, compared to permafrost samples not mixed with seawater, simulating inshore conditions, explained George Tanski, a colleague of Lantuit’s and lead author of the study, in an email to The Narwhal.

Carbon dioxide produced by thawing coastal permafrost isn’t necessarily being emitted into the atmosphere, though. It could be absorbed by the water, and the study didn’t account for certain parameters that could disrupt the flow of carbon dioxide, such as the presence of algae blooms.

Ultimately, there is twice the amount of carbon in permafrost than currently in the atmosphere, Lantuit said.

“That’s why permafrost is making the headlines, because there’s a lot of carbon in there,” he said. “No scientist is going to tell you that all carbon is going to be released and turned into greenhouse gas emissions immediately. Some of it is refractory, but still, it’s there and it can be released.”

Herschel Island, or Qikiqtaruk, was turned into a territorial park in 1987, as a result of the Inuvialuit Final Agreement.

The island continues to be used for subsistence harvesting, though not to the degree it once was, as the area is getting harder to access, said Richard Gordon, senior park ranger at Qikiqtaruk Territorial Park. 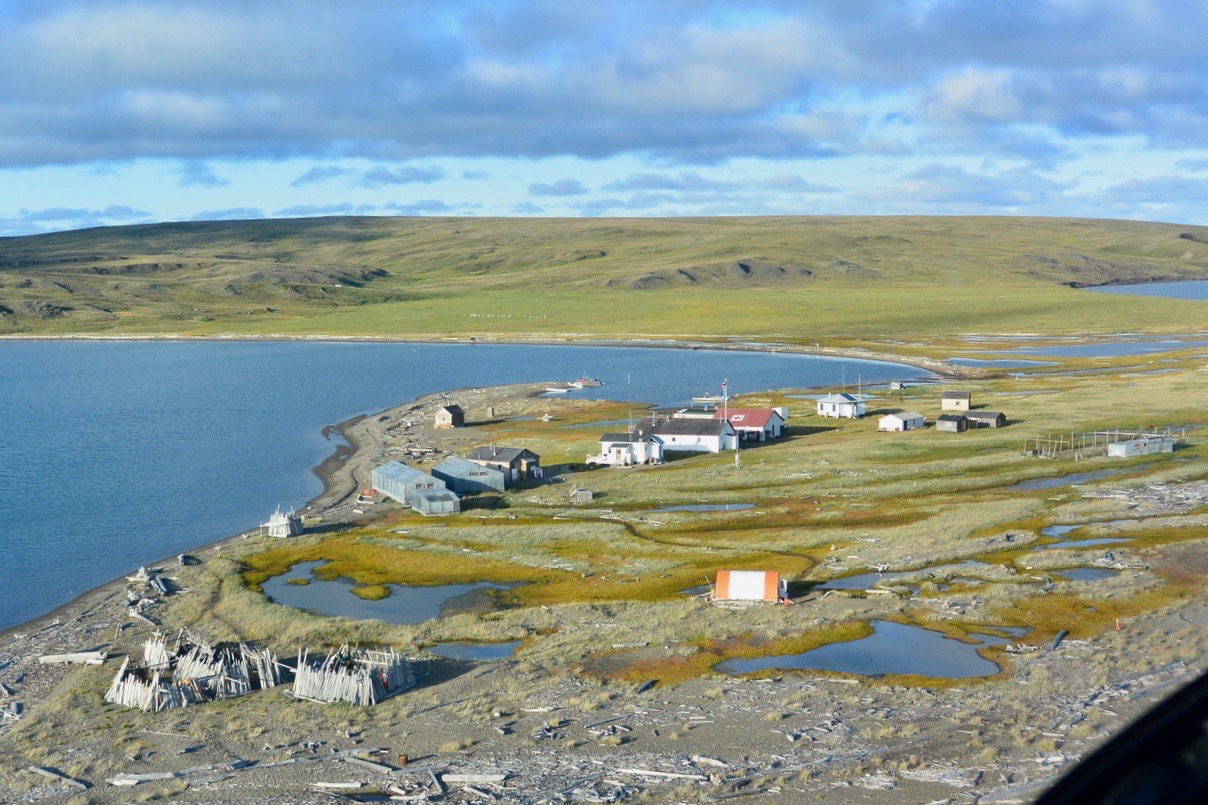 “There’s more rough water and the erosion that is happening is filling in the little bays that people used to use as safe havens. People are concerned about getting caught in storms and stuff like that. It really affects the travel and harvesting along the shoreline.”

Gordon is Inuvialuit, from Aklavik, Northwest Territories, just over the Yukon border.

“Erosion, climate change, is affecting the cultural subsistence harvesting of the Inuvialuit throughout the settlement region,” he said.

Herschel island was also a hub for European and American whalers in the late 19th century, who constructed 11 buildings at the island’s east end that now have heritage status. Three of these buildings had to be moved upward of 20 metres from the shore since 2005.

“A lot of the buildings at Pauline Cove were threatened by high water and storm surges,” Gordon said, adding that historical artifacts were getting washed away due to erosion.

Between 2000 and 2013 researchers have seen a “drastic increase” in erosion on Herschel Island, compared to the decades before, said Lantuit, who has been visiting the island every summer since 2003.

The average rate of coastal erosion in the Arctic is 0.5 metres per year, Lantuit said. And notably, 34 per cent of the earth’s coastlines are found in the Arctic.

“If it goes to one metre per year, which is now in the realm of real possibility for the Arctic, it sounds like little, but it’s going to be 100 per cent more carbon released into the ocean, mathematically,” Lantuit said. “The magnitude of change is enormous.”

The drivers behind erosion are many. There’s more open water now in the Arctic (as late as November), which allows more waves to lick the coastline, gradually diminishing it. The Arctic ocean is getting warmer, too, and storm surges that cause water levels to rise are becoming more frequent, Lantuit said.

“That’s what we’re moving towards.”

Just what this could ultimately mean for climate change, the report says, needs to be accounted for in climate models going forward. And Herschel Island, at least what’s left of it, could be a key to understanding this.

The battle for the ‘breathing lands’: Ontario’s Ring of Fire and the fate of its carbon-rich peatlands

Northern Pulp, the mill that turned an estuary into a series of polluted ponds, closed...