The Harper government has been using taxpayer money to sharpen its marketing toolkit in the debate over natural resource development. According to a recent report from Léger Marketing, Natural Resources Canada (NRCan) commissioned the company to perform pre- and post-testing of their $9 million Responsible Resource Development advertising campaign.

Aside from revealing the extraordinary cost the Harper government is willing to foot in order to assure that the country gets a sunny picture of its economic policies, the report provides a unique behind-the-curtain view of the mechanics involved in selling energy and resource development to Canadians.

The reasoning behind the move to hire a marketing firm seems relatively innocuous: “It will be important in this environment to encourage Canadians to become better informed about the development of Canada’s natural resources and the critical impact to Canada’s economy that contributes to our economic growth and jobs, and through generated tax revenues helps to maintain important social programs like health, education and pensions.”

However, the report reveals Léger used focus groups to test not only comprehension and recollection of the message in the ads, but also “the extent to which Canadians were impacted by the language, content and context of the advertising concepts.”

The first round of ads was tested on people who represented “a good mix of ethnic, educational and socio economic backgrounds” in Vancouver, Prince Rupert, Moncton, Mississauga, London and Quebec City in November 2012. In total, 2000 Canadians were interviewed.

The first two concepts entitled “Let’s do Both” and “Canada’s Moment” highlighted the ways in which Harper government’s Economic Action Plan (EAP) was balancing environmental impact and job creation.

This first round of commercials were said to leave subjects feeling confused. The images they saw didn’t give respondents an adequate idea of how they might personally benefit from resource development. Worst of all, they felt that they couldn’t see how the government would balance resource development with environmental protection. They believed “the concepts were missing hard facts or evidence regarding the claims presented.”

This prompted NRCan to request another $4 million for their advertising budget to produce a second round of ads. These three new ads offered a much more pleasant and focused picture of Canada’s natural resource policies, with heavy emphasis on oil extraction and transportation.

This time they got the desired result. Focus groups in Vancouver, London and Quebec City “readily understood the messages conveyed by the ad concepts and mostly viewed them as uplifting, many spontaneously saying that it made them proud to be Canadian.”

The third of the new ads, “Environment and Safety” even “reassured many people that the Canadian government was doing something to protect the environment for future generations.”

Without changing a single policy, the EAP went, in the eyes of focus groups, from hurting the country’s environment to saving it.

Never mind that several of the examples presented in the commercials—shipping safety along BC’s coast, oil pipelines in Ontario—refer to issues that are being hotly debated on ethical grounds. The stirring nationalistic tone banished any questions.

Using Canadian identity to sell environmentally questionable resource development is nothing new. Many are familiar with the advertisements from Cenovus that played before films at Cineplex movie theatres last year. Alongside stirring images of the Canadarm and the majestic peaks of the Rocky Mountains, it told us that the word Canada is “spelled with a can — not a can’t,” implying that if we don’t use all the technology available to extract and sell our oil, we've failed at being Canadian. 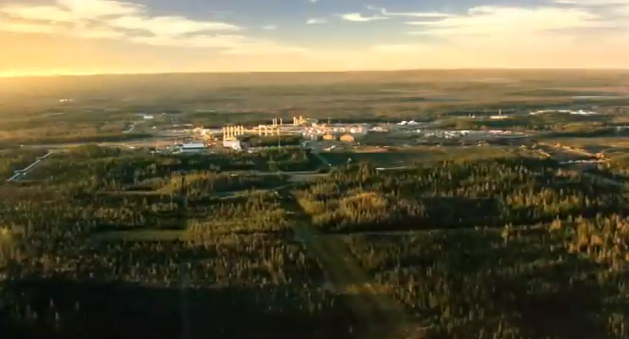 Vision of Alberta's tar sands, as artistically rendered by Cenovus.

NDP Treasury Board Critic Mathieu Ravignat told the Canadian Press the government ads are nearly indistinguishable from ads released by the Canadian Association of Petroleum Producers, Canada's largest and most powerful oil and gas lobby.

"If you put the ads next to each other — the government ads and the Canadian Association of Petroleum Producers ads — what's going on is damage control," Ravignat said.

"We've got an industry which doesn't have the best reputation, we've got a government helping part of the industry in order to sell itself as responsible."

The difference here is that our government is paying for the EAP advertisements with our taxes. Sure, it’s important for our government to keep us up to date but if, as the interviews uncovered, most Canadians already understand “the importance of natural resources for Canada’s economy and for job creation,” what is the function of this kind of advertising?

Is the Harper government using its advertising budget to inform us of neutral facts or to sell us on practices that it knows make us queasy?

As a freelance writer, Erika Thorkelson is dedicated to showcasing compelling stories that illuminate our world and how we live.…