First Nations women camping at the Rocky Mountain Fort site and opposing ongoing construction for the Site C Dam say they feel intimidated and harassed by male security guards and “investigators” with ties to BC Hydro.

Women at the encampment told DeSmog Canada small groups of men arrive on site at least twice a day to film the predominantly female campers and repetitively question them about their intentions.

“There would be three or four of them with cameras and all males,” says Helen Knott, a Treaty 8 member and Fort St. John social worker who has sometimes been alone in the bush when security guards and investigators suddenly appear. “It was intimidating…as a young indigenous women coming into daily contact with men with cameras in the middle of nowhere.”

Knott has been camping at the historic fort site since New Year’s Eve when she and other Treaty 8 members, along with Peace Valley farmers and business owners, set up a wilderness camp to maintain a presence in an old-growth forest on Crown land that is slated to be clear cut and flooded for the Site C dam.

One group of rotating campers keeps a fire burning throughout the day near the bridge over the Moberly River that was constructed by BC Hydro during the Christmas holidays in preparation for logging. The forest is prime habitat for the blue-listed fisher and migrating songbirds, and is used by Treaty 8 members and elders for spiritual purposes and to collect plants for traditional medicines. 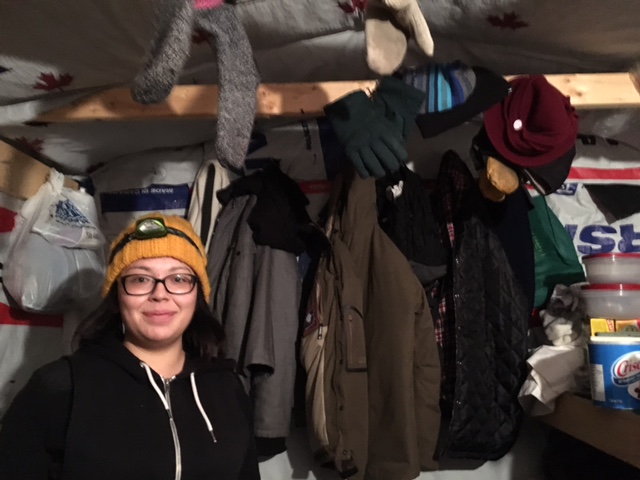 Another group remains at the camp a 20-minute walk away, at the site of the first European fort in mainland B.C., where the Beaver people came to trade furs with early explorers and voyageurs in the late 1700s and early 1800s. The fort site, along with 42 other heritage sites along 107 kilometres of the Peace River and its tributaries, would be flooded by the $8.8 billion Site C dam project.

Knott says she has experienced some uncomfortable moments during the twice-daily questioning, during which security “investigators” film the women without their permission and ask for the names of the people present, how long they will stay and if they intend to allow or prevent “timber harvesting” in the area.

No logging has taken place since January 7 when the campers, who call themselves the Treaty 8 “Stewards of the Land,” began to maintain a constant vigil from dawn until dark, in temperatures as low as minus 25 Celsius, after old-growth cottonwoods were logged that day when they briefly returned to the fort site to get food.

“The other day because I wasn’t giving him (the investigator) the answers that he wanted, his voice started getting a little bit louder and he was talking over me,” Knott said. “He said ‘you’re not answering my questions,’ because I answered his question with a question. I asked him, ‘Are you still going to infringe on my treaty rights?’ And he started talking over me and his face got red and finally he just calmed down and he just walked away…He was getting worked up.”

Knott says she and others have asked the security investigators many times not to come into the camp where women are sleeping, eating and using an outdoor toilet, but they continue to do so at least twice a day, filming the campers standing outside their tent and cooking and sleeping huts, and asking the same questions again and again. “That is . . .basically borderline harassment especially when we’ve asked [them not to]…And they say this is what we were instructed to do and we say ‘well, it’s not okay.’” 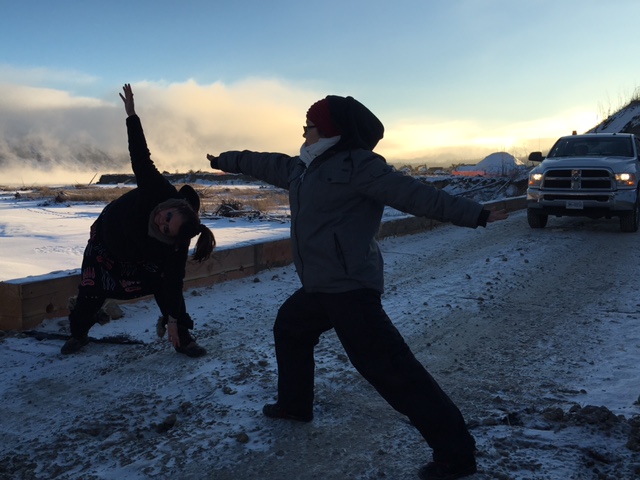 Helen Knott and Yvonne Tupper do sunrise yoga on the newly-constructed bridge over the Moberly River as security guards watch and film. Photo: Sarah Cox.

The security guards and investigators wear jackets emblazoned with “Saulteau Safety and Security.” The Saulteau First Nation belongs to B.C.’s Treaty 8 Tribal Association, and the Nation was once strongly opposed to the dam’s construction. But following a 2015 band council election the Nation’s new leadership has taken a different tack.

According to a BC Hydro information bulletin, in July 2015 the new Saulteau chief and councilors agreed to terms for a Site C impact benefits agreement. The agreement followed a controversial on-line vote by band members that saw 144 people cast ballots out of 711 eligible voters. Eighty-nine band members voted in favour of the agreement, which included lump sum payments, an annual payment stream and contracting opportunities. A logging company owned by a Saulteau band member was awarded the contract to clear the south banks of the Peace River, including the area around the historic fort.

Camper Yvonne Tupper, a Treaty 8 member from the Saulteau First Nation, says she does not recognize any of the nine different security guards and investigators she has encountered, all of them wearing “Saulteau Safety and Security” jackets. A second Saulteau woman at the Treaty 8 Stewards of the Land camp, who did not wish her name to be public, also said she did not recognize any of the security guards or investigators.

“When a single female is out here they ask more questions and they intimidate more and we have proof of that [because they are] being recorded,” says Tupper, a Chetwynd community health worker.” She says the campers film every interaction with security investigators and guards.

A company profile on the Work BC Employment Services Centre for Fort St. John describes Saulteau Safety and Security as a “partnership” between the Saulteau First Nations and the Vancouver-based company Securiguard Services Ltd. It says a joint venture agreement signed by the Saulteau chief and councilors provides “a significant opportunity to partner with the local first nations people and award them the right to protect their lands and represent their identity.” Securiguard is a Site C contractor, according to BC Hydro.

Huts airlifted into the encampment, which is four hours from Fort St. John by highway, backroad and snowmobile. Photo: Sarah Cox.

A December 11, 2015 job posting for Saulteau Safety and Security guards based in Fort St. John directs applicants to the Securiguard website. The job posting asks for candidates “who are able to effectively and positively communicate in a customer service oriented manner with a variety of people.” The jobs pay a starting wage of $16 to $19 an hour. Duties include welcoming people into the area, patrolling, crowd control, crime prevention and “providing excellent customer service.”

BC Hydro media relations spokesperson Dave Conway, responding to an emailed request for an interview with BC Hydro to discuss the Rocky Mountain Fort camp and Saulteau Safety and Security, emailed back what has become a scripted response about the camp which states that BC Hydro is “not moving equipment within the immediate proximity of individuals or the encampment itself.”

Conway did not respond to a second email with specific questions about Saulteau Safety and Security and the joint venture’s interactions with female campers.

Verena Hofmann, a Peace resident who is supporting Treaty 8 members at the camp, says she also feels intimidated by the security investigators and has told them so on camera. “This is repetitive,” she said on January 13 to two investigators from Saulteau Security who called themselves Glen and Sten, after they filmed her and asked the same questions for the second time in several hours. “To me that feels like pestering and harassment and it doesn’t feel like trying to find workable solutions as we’re hearing in the media quoted by BC Hydro.” 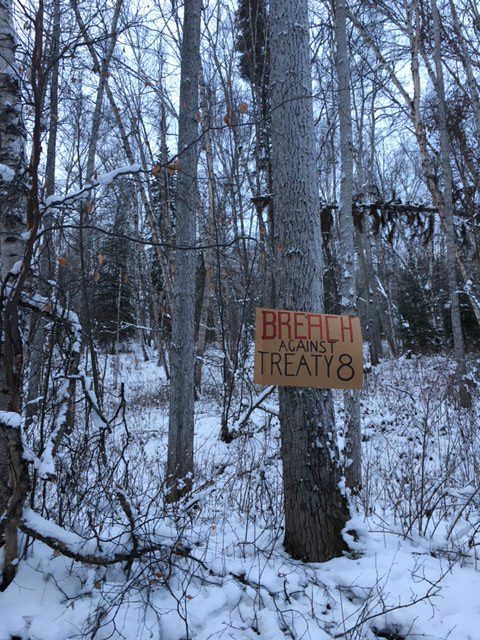 The area slated to be logged is the subject of an ongoing judicial review court case by the West Moberly and Prophet River First Nations, who say they were not adequately consulted regarding the permit process. These two First Nations have two additional court cases against Site C. Peace Valley landowners also have an appeal case against the dam that will be heard in early April.

A fifth on-going court case, launched by the Blueberry River First Nation, claims that the cumulative impact of Site C and other extensive industrial development in the Peace violates the band’s treaty rights.

Image: Yvonne Tupper points to trees cut on crown land that is the subject of the ongoing court case with the West Moberly and Prophet River First Nations. Photo: Sarah Cox.