This story is published courtesy of the Guardian as part of the ongoing series This Land is Your Land.

But for decades, residents have been unable to safely make use of it. Wary of crumbling infrastructure and waterborne illness, the community instead relies on shipments of bottled water. The community’s newly elected chief, aged 34, has lived her whole life without the guarantee of clean water flowing from the tap.

“The emotional and spiritual damage of not having clean water, having to look at all of the water surrounding us on a daily basis and unable to use it, is almost unquantifiable,” said Chief Emily Whetung.

Amid mounting frustration, Whetung and other Indigenous leaders have launched national class-action lawsuits against the federal government. Arguing the federal government failed to provide clean water and forced communities to live in a manner “consistent with life in developing countries” they are suing the government for $2.1 billion damages — the costs associated with years of bottled water trucked and a water treatment system for the whole community.

Despite being one of the most water-rich nations in the world, for generations Canada has been unwilling to guarantee access to clean water for Indigenous peoples. The water in dozens of communities has been considered unsafe to drink for at least a year — and the government admits it has failed. 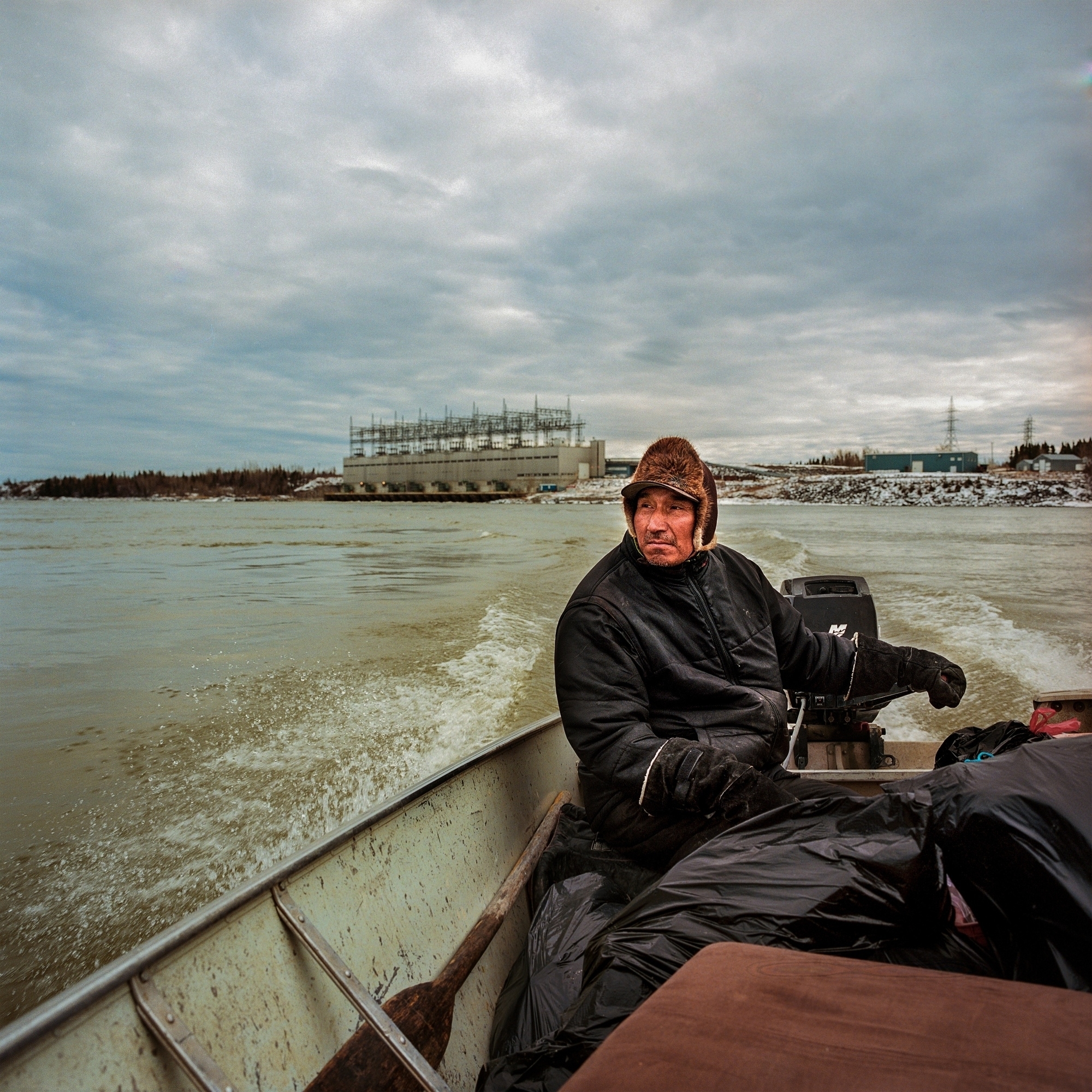 Able Flett, from the Tataskweyak Cree Nation, passes the Kelsey Dam on his return to the community after taking youth out on the land for a traditional knowledge program. The Tataskweyak nation, which has been severely impacted by hydro development on northern Manitoba’s rivers, is participating in the class-action lawsuit. Photo: Aaron Vincent Elkaim / The Narwhal

In 2015, Justin Trudeau, then campaigning for the country’s top job, made an ambitious promise to end the scourge of unsafe water in more than 100 First Nations communities across the country. But on April 30, the federal minister overseeing the issue acknowledges the government has missed its March deadline on its own five-year promise, and says he has “no credible excuse” for how communities that have gone decades without clean water still lack access.

“It’s unacceptable in a country that is financially one of the most wealthy in the world, and water rich, and the reality is that many communities don’t have access to clean water,” the federal Indigenous Services Minister, Marc Miller, told the Guardian in an interview.

Access to drinking water is something few Canadians ever have to think twice about. But the vast geography of Canada and the disparate locations of 630 First Nations communities — some accessible only by plane — makes setting up water treatment infrastructure a logistical challenge.

As a consequence of colonial-era laws, Indigenous communities have been barred from funding and managing their own water treatment systems, and the federal government bears responsibility for fixing problems. 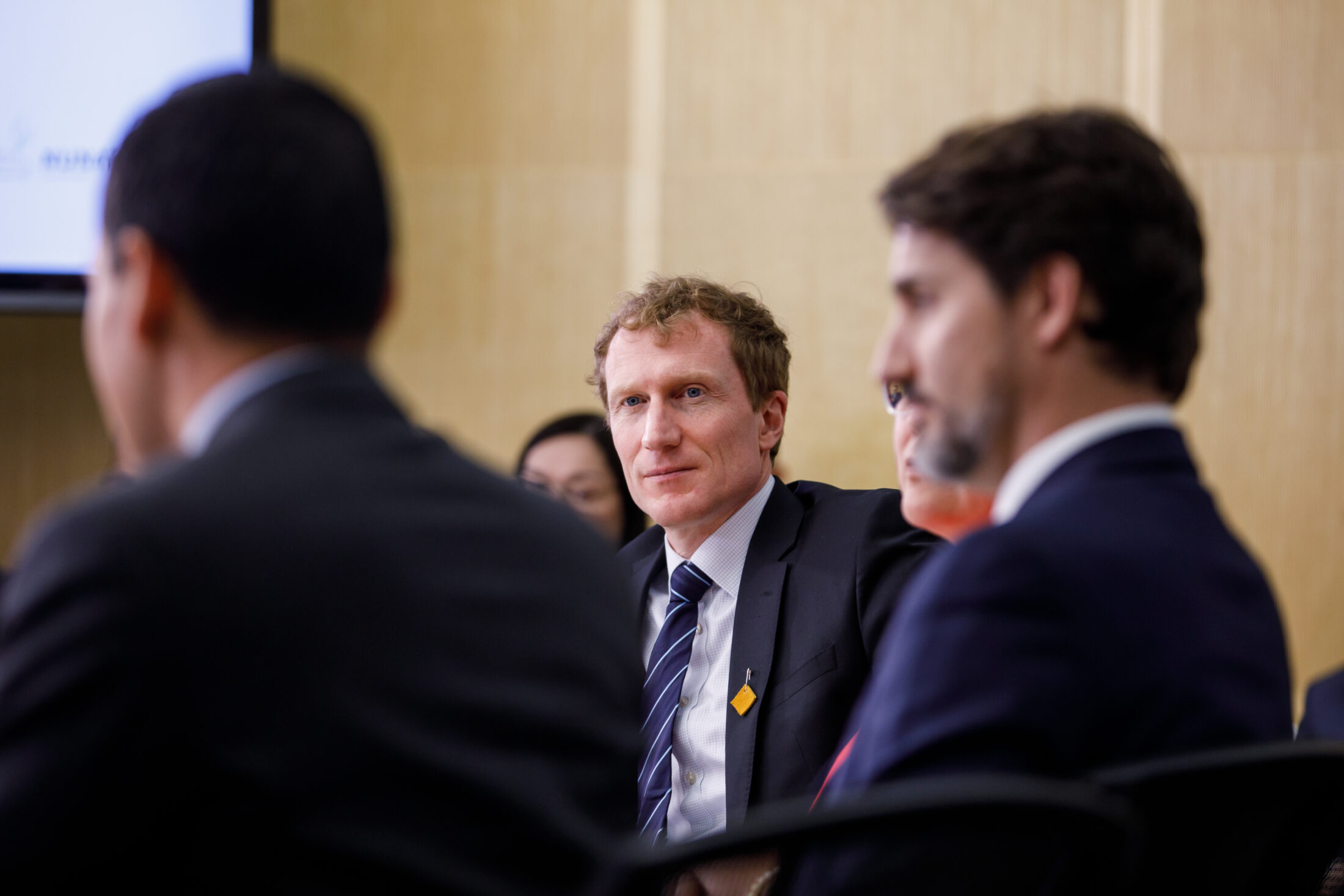 Certain communities, like Curve Lake, have issues with E coli in their water. Others, like Grassy Narrows, struggle with a legacy of toxic heavy metals, a remnant of negligent industry. In some cases, water is tainted by parasites and bacteria that occur naturally. In others, reactions between organic material and chemicals used to purify water can create unsafe water.

In consequence, the government issues advisories warning against using the water, and some have been in place for decades. The community of Neskantaga in northern Ontario, has been under a water advisory since 1995, researchers found, despite having a water treatment plant. In Manitoba, Shoal Lake 40’s water advisory has been in place since 1997. Plans for a water treatment plant were scrapped in 2011 after the federal government balked at the cost of the project.

In those communities, children have sores and skin diseases like eczema. Others struggle with gastrointestinal disorders.

For Whetung, Curve Lake’s battle to get clean water encapsulates the struggles of many First Nations communities.

When Curve Lake’s water treatment plant was built in 1983, it was intended to serve a population of only 56 and had a shelf life of 20 years. Despite quickly outgrowing the capacity of the plant, decades of bureaucracy have stalled the community’s ability to upgrade their infrastructure. As a result, the community has dealt with multiple drinking water advisories over the years, including a recent boil-water advisory that lasted nearly two years.

An inspection of the plant by Ontario’s ministry of environment found a filter that wasn’t removing pathogens and malfunctioning ultra-violet treatment. While the ministry determined the community was in urgent need of a new plant, there was nothing the province could do: the plant was the responsibility of the federal government, which deemed the risk to be lower. The federal government has approved design plans for a new facility, but construction is still years away. 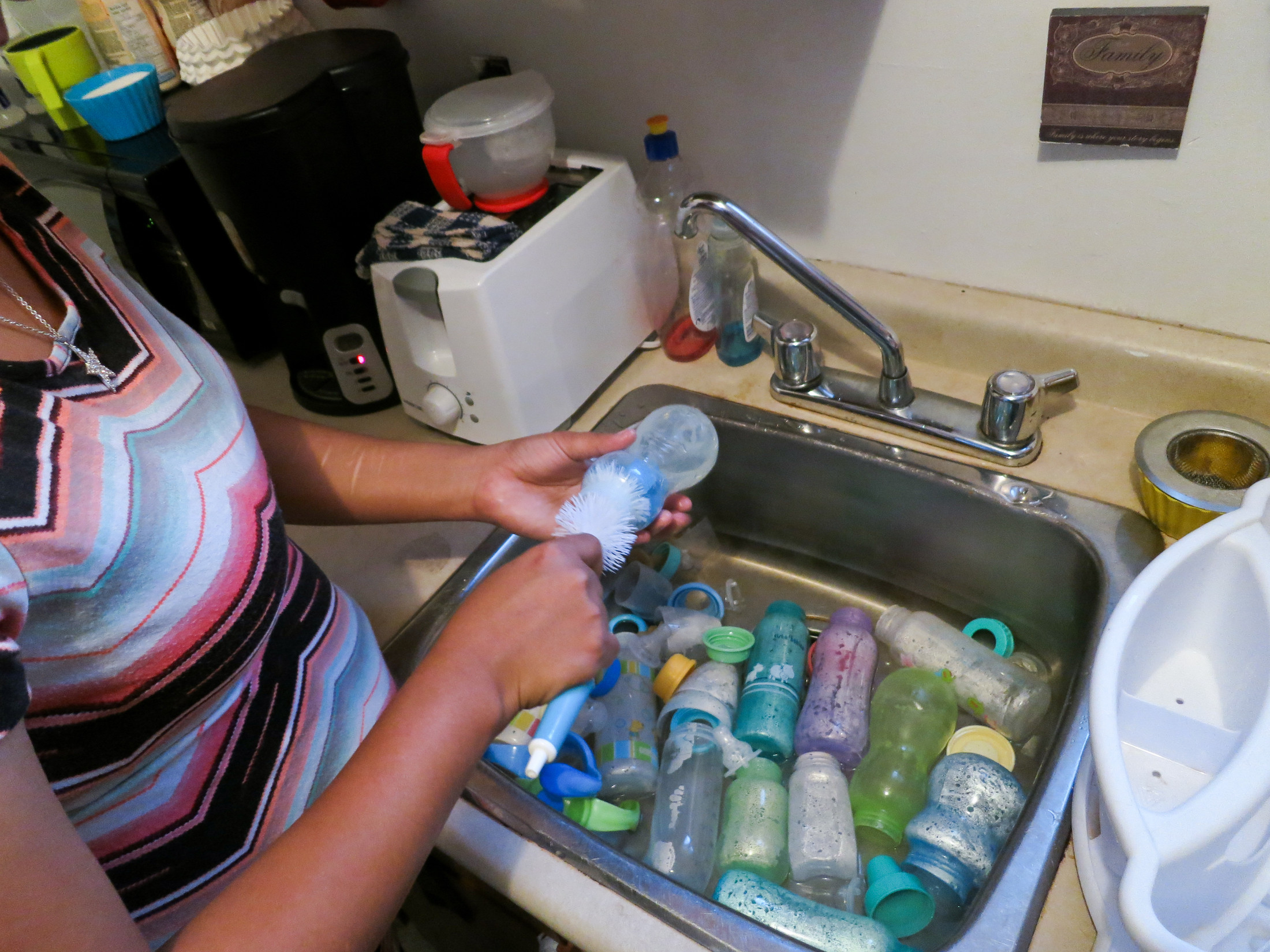 Until that plant is built, the shipments of bottled water will continue.

“Water is life,” said Whetung. “It’s what we grow our children in when they’re in the womb. And we can’t use any of what we have access to.”

Since he first took office, Trudeau’s government has made significant progress on the issue, investing more than $2 billion. In 2016, there were 105 communities with long-term drinking water advisories in place — meaning the water had been unsafe to use or consume for at least a year. As of late April, that number is down to 52 advisories in 33 communities.

The federal government says the figure remains high because of delays arising from the coronavirus pandemic, and it has pledged another $1.5 billion in funding.

But a scathing report from Canada’s auditor general at the end of February found that the federal government had failed to invest sufficient resources in the task and that much of the work was lagging even before the pandemic hit. 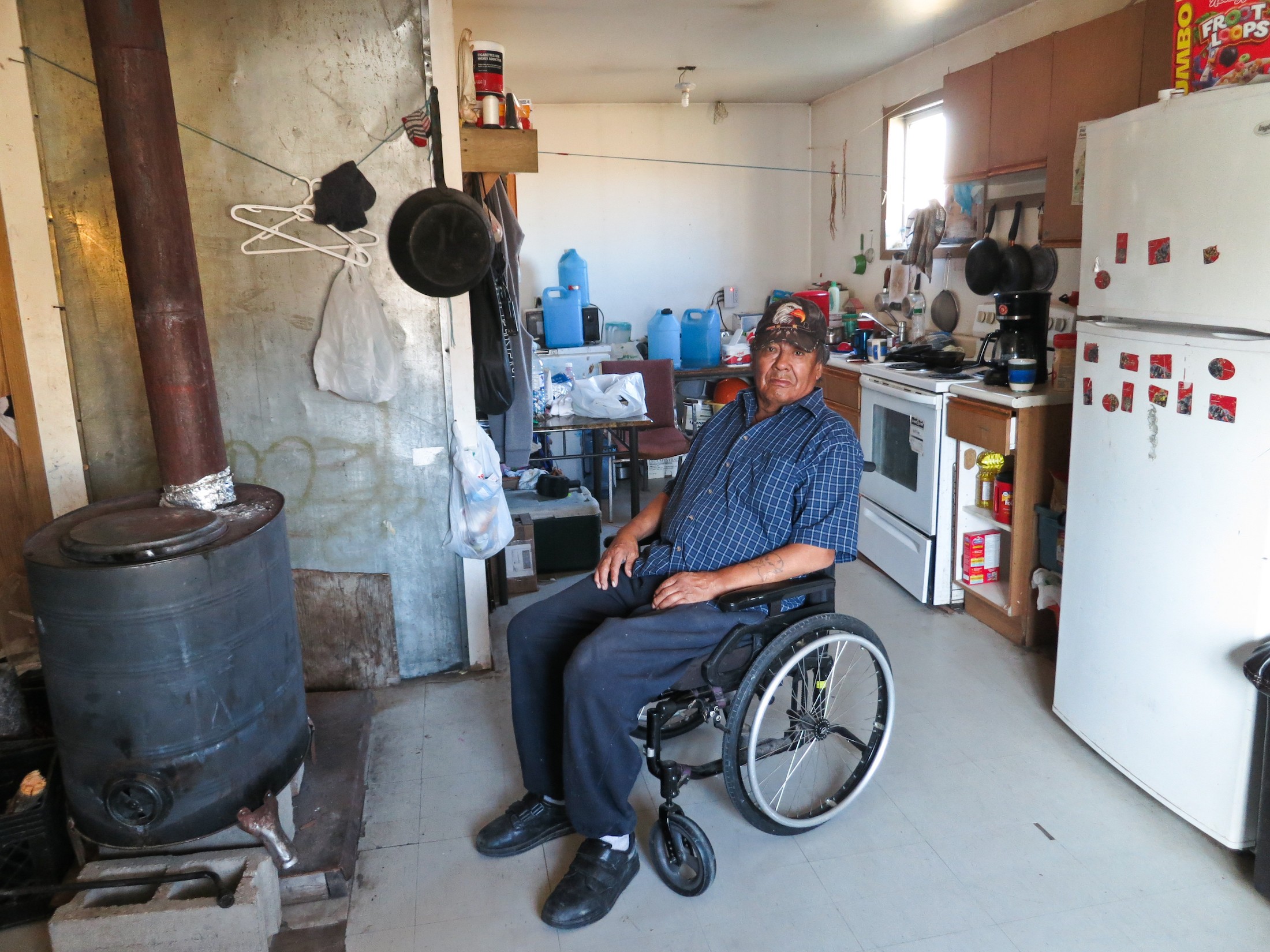 Walter Sakanee, an elder living in Neskantaga First Nation pictured here in 2015, has had difficulty fighting infections in his legs. He relies on his family members to collect safe drinking water for him in blue plastic jugs from a reverse osmosis machine located at the community’s water treatment plant. He is not able to access the plant on his own due to his physical disability. Photo: Samer Muscati / Human Rights Watch

“I am very concerned and honestly disheartened that this longstanding issue is still not resolved,” the auditor general, Karen Hogan, told reporters, warning it would be years before some communities have their advisories lifted. “Access to safe drinking water is a basic human necessity. I don’t believe anyone would say that this is in any way an acceptable situation in Canada in 2021.”

The auditor also found that a number of the drinking water advisories that the government lifted were the result of interim measures rather than long-term upgrades.

“It seems unbelievable that there are communities that have dealt with drinking water advisories for more than two decades,” said Charles Hume, an elder with the Champagne and Aishihik First Nations. “We’re not looked at the same … we’re actually the last on the totem pole.”

Not only are we filling a void in environment coverage, but we’re also telling stories differently — by centring Indigenous voices, by building community and by doing it all as a people-powered, non-profit outlet supported by more than 3,100 members.

Leyland Cecco
Leyland Cecco is a freelance journalist based in Toronto, Canada. His work has primarily been in the Middle East, South Asia and C...

Dave Salayka has been a professional forester and tree faller for most of his working life. He’s laid out cutblocks, worked in Alberta’s oilsands and...

Seeing the forest for the trees: searching for solutions in the Kispiox Valley

As the province reviews the timber supply in a northwest B.C. forest district, locals explore...

Canadian Natural Resources Limited — which has reported an average annual profit of $1.9 billion...

Proposed developments in Canmore, Alta., were set to double the population of the Rockies tourism...

We’re celebrating our award news with an exclusive, limited-time offer! Sign up as a monthly member of The Narwhal today and we’ll send you one of just 1,000 copies of our 2021 print edition.

Send me a magazine!
Help power our ad-free, non‑profit journalism
Join us