The nation hopes the plant, which has the potential to produce both electricity and direct heat, will inspire other northern communities to follow suit

A natural gas field nearing depletion in northeastern B.C. could see new life as a reliable source of renewable energy for remote communities that today depend on fossil fuels for heat and electricity.

Fort Nelson First Nation recently secured a key provincial permit for the geothermal rights to 6,800 hectares of land in the Clarke Lake gas field, setting the stage for a drilling program later this year to prove that a commercial-scale geothermal power plant is within reach for the area.

Geothermal energy could significantly reduce greenhouse gas emissions in the Fort Nelson region, where electricity is currently generated from natural gas or imported from Alberta, which is heavily reliant on fossil fuels for power. It could also provide access to great stores of heat that could be used by industry, for tourism, or to keep local homes toasty in the winter.

“Greenhouse production is an obvious opportunity to explore. Everyone is pretty excited about producing fresh food in our region in the middle of winter,” Fort Nelson First Nation Chief Sharleen Gale told The Narwhal in an email.

Geothermal energy is contained in hot rocks and water deep underground. Unlike renewables such as solar and wind, geothermal can provide a constant power stream, making it an attractive source of baseload energy.

The challenge is finding the right conditions for production.

Geothermal energy is taking off globally, so why not in Canada?

“It’s easy to figure out where it’s windy and sunny on the surface, but it’s kind of hard to figure out where there’s hot permeable rocks two kilometres underground,” explained Steve Grasby, a research scientist with the Geological Survey of Canada.

Typically, geothermal power not only requires heat, but also water, which absorbs heat by flowing through permeable rock. As long as the water, or in some cases steam, flows at a high enough rate, it can be drawn to the surface through a well where heat energy can be extracted and either transformed into electricity at a power plant or used as direct heat to warm greenhouses for food production or buildings during cold winter months, a common use in Iceland.

The geothermal greenhouses at Garðyrkjustöð Ingibjargar have been in operation since the 1930s. Photo: Carol Linnitt / The Narwhal

Researchers working on a project for Geoscience BC, an independent, non-profit research organization, have already been able to model the Clarke Lake reservoir and simulate the flow of hot water from the underground aquifer.

A subsequent “pre-feasibility” study determined there is potential to produce both heat and electricity from the geothermal resource in the Clarke Lake gas field. The study offered rough estimates, within 50 per cent accuracy, that a 15 megawatt project could cost between $139 million and $285 million and take 12 to 24 years to payback.

“We do see it as one of the higher potential parts of the country and I think well worth the exploration effort,” said Grasby. 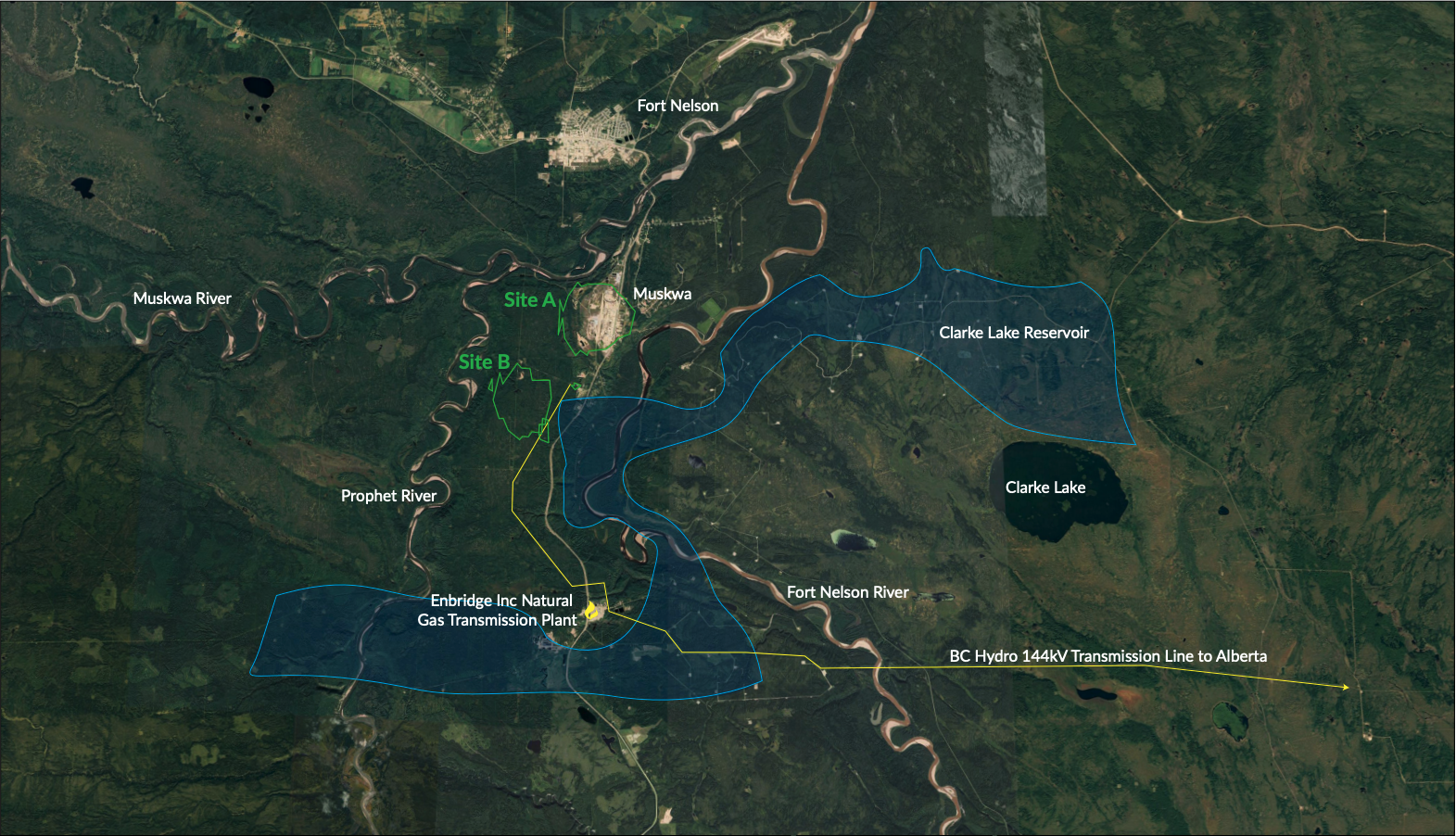 Map of the Clarke Lake geothermal study area. BC Hydro transmission lines are shown in yellow. Map: Geoscience BC

Geothermal exploration can carry significant economic risks: in a worst case, millions could be spent drilling a test well only to find high heat but no fluid to carry that energy to the surface.

In the Clarke Lake area, data collected from gas revealed high temperatures well below the surface, helping to bolster the odds of success. But the presence of high enough water flows can only be confirmed through drilling.

In a statement, Bruce Ralston, the minister of Energy, Mines and Petroleum Resources, said the recently issued provincial permit “gives the Fort Nelson First Nation the certainty it needs to attract investment and move forward with developing a geothermal energy project that will reduce climate pollution while creating new jobs and opportunities.”

Geothermal plant could be up and running by 2024

Alongside likely benefits for the climate and food security, the project’s economic opportunities are a welcome prospect for the Fort Nelson First Nation, which is partnering with the Saulteau First Nation to bring geothermal energy to the province’s northeast.

“Our region is economically depressed and our people are under employed. We need opportunities through project ownership,” said Gale. “We have seen what happens as a people with industrial development when we are not fully involved.”

Though a number of permits are still needed, Fort Nelson First Nation and its partner are planning to drill a test production well and injection well later this year.

“We know the geothermal resource exists through all the data that’s been collected but it has to be proven … so the development can be commercially financed,” said John Ebell, project manager of the Clarke Lake geothermal undertaking and a founder and owner of the Barkley Project Group.

The test production well, which will be some 2,500 metres deep and about 13 inches wide at the bottom, will run for two weeks to a month, enough time to prove the project is viable, said Ebell.

If all goes according to plan, a geothermal plant could be running by 2024.

“I have a lot of confidence in the Clarke Lake project so I have no doubt we’re going to make it across the finish line,” Ebell said.

Gale hopes it can serve as an example for other communities, as well.

“Geothermal energy is available in other northern Indigenous communities. Fort Nelson First Nation and our partner Saulteau First Nation hope that what we accomplish will be an inspiration to other communities,” she said.

‘You have to risk money to drill holes’

There are a number of areas with geothermal potential in B.C. — from the hot sedimentary basin in the northeast to the volcanic belt in the southwest — and some other communities are already actively exploring the possibility of capturing that energy from deep within the earth.

Projects are underway south of Terrace, where the Kitselas First Nation has partnered with the Borealis GeoPower on the Lakelse project, and south of Valemount, where the same company is working with the Valemount Geothermal Society on the Canoe Reach project.

Drilling that deep comes with its challenges but Canada is well positioned given the drilling expertise that already exists as part of the oil and gas industry and could be applied to geothermal.

The Achilles’ heel of geothermal is the financial risk of exploration. Just one test well for the Clarke Lake project is expected to cost around $12 million. While Natural Resources Canada gave Fort Nelson First Nation $1 million to assess the Clarke Lake resource last year, Ebell expects to face some funding challenges since the geothermal resource is not yet proven.

“You have to risk money to drill holes and if you don’t find a good resource you’ve lost all that,” said Grasby, who’s hoping his team’s research in the Garibaldi Volcanic Belt will help reduce the risks of exploration.

The goal is to find new ways to better predict the location of those sought-after hot, permeable aquifers and in doing so encourage more industry investment in exploration.

“Geothermal won’t work everywhere, there are parts of Canada that we know are very low temperature and the thermal resources aren’t there, but in places that we do have the right temperatures, it could be a very good source of energy,” said Grasby — even if it’s just for the heat.

Banner: The winding Muskwa River cuts through boreal forest near Fort Nelson and Clarke Lake, where the Fort Nelson First Nation hopes to build an electricity and heat-generating geothermal energy plant. Photo: Garth Lenz / The Narwhal
We hear it time and time again:
“These are the stories that need to be told and you are some of the only ones telling them,” John, a new member of The Narwhal, wrote in to say.