The B.C. government has refused to exercise its authority to order a provincial environmental assessment of the Kinder Morgan Trans Mountain pipeline and tanker project, instead opting to rely on a report produced by the federal National Energy Board (NEB) that recommended approval of the project.

This means the province’s decision on the project — which would triple the amount of oil shipped through Vancouver — will be made using a Harper-era assessment heavily criticized for having no cross-examination of evidence and failing to assess cumulative effects, marine oil spills and greenhouse gas emissions.

The federal government has to decide whether to approve the project by Dec. 19 — but the province also has to make its own decision on whether to grant an environmental assessment certificate.

In May, B.C. Environment Minister Mary Polak said that even if the company met the conditions the National Energy Board placed on the project, the project would still fall short of the five requirements B.C. put in place for its approval of any pipeline project.

“We still have a long way to go with respect to marine spill preparedness and response,” Polak said. “There is obviously significant work that needs to be done with First Nations.”

Which is why it’s so puzzling that, when given the opportunity to conduct its own environmental assessment of the project, the province opted to go with a federal process that’s widely viewed as deficient.

Supreme Court Ruled B.C. Has to Make Its Own Decisions

The province first tried to hand over responsibility for the environmental assessment in June 2010, when it signed an “equivalency agreement” with the National Energy Board.

That meant the province would accept federal environmental assessment reports as its own for five major projects, including the Enbridge Northern Gateway pipeline and the Kinder Morgan Trans Mountain pipeline.

It was that abdication of responsibility that resulted in a decision by the B.C. Supreme Court in January, which found the B.C. government “breached the honour of the Crown by failing to consult” with Coastal First Nations for Enbridge Northern Gateway.

Essentially the ruling found that the province could not hand off its responsibility for environmental assessment.

“The decision of the Supreme Court is very clear that the province should stand on guard for the interests of the province in the federal review process and that it failed to do that in Northern Gateway,” said Chris Tollefson, executive director of the Pacific Centre for Environmental Law & Litigation.

In order to comply with the court ruling, B.C.’s Environmental Assessment Office had to make an explicit decision of whether to do its own assessment or to accept the National Energy Board assessment as sufficient for Kinder Morgan’s oil export proposal to Vancouver.

In a letter sent to Kinder Morgan on March 17, Kevin Jardine, the executive director of the Environmental Assessment Office, noted it would “accept the NEB report as the assessment report,” only conducting further discussions with First Nations to fulfill duties to consult and accommodate.

That letter was sent only two months after the province reiterated its opposition to the Trans Mountain pipeline project in its final argument to the National Energy Board, mostly due to the proponent’s failure to submit a detailed oil spill prevention and response strategy.

The province’s final argument reiterated the province’s “five requirements” for heavy oil pipelines, the first of which is “successful completion of the environmental review process.” 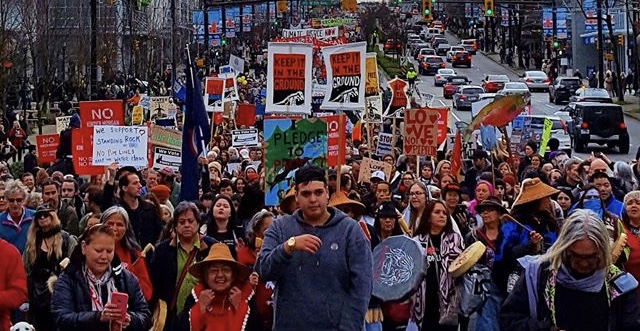 Tollefson said he was “expecting and hoping” the province would embark on a proper consultation and assessment of its own.

“The province could certainly identify areas where the proposal is deficient and where steps need to be taken to fix problems,” he said. “It could certainly quite legitimately under its constitutional powers insist on those issues being addressed.”

To be sure, the province wouldn’t be able to simply veto the project even if its Environmental Assessment Office produced a report that advised not issuing a project certificate.

But the province has a variety of constitutionally recognized interests at stake, Tollefson says.

The judge in the Coastal First Nations case noted it's important for the province to balance economic and environmental interests, and that it “would be best served by a process that provided it with the tools to complete a thorough evaluation and review it before making the decision that will impact the province.”

Kai Nagata, communications director at democracy group Dogwood, suspects that the province’s consultation process is providing Premier Christy Clark a “political buffer” between the federal approval — required on or before Dec. 19 — and the provincial election on May 9, 2017.

“Dropping a pipeline approval … into the provincial election campaign would destabilize the picture politically,” he says.

“This review would give the provincial government political cover so they don’t have to take a position on the project and can simply say ‘let’s wait for the review to do its work and take its course and we will evaluate our five conditions based on all the evidence on the table so far after the election.’ ”

The first is to maintain the current strategy, which relies on the federal assessment of the project.

Even that won’t likely help the Trans Mountain pipeline get built, according to Tollefson, who predicts that if approved under the current rules, the pipeline will be held up in litigation for a “long period of time” and the proposal will never earn the social licence it would require.

The other option is for the provincial government to order a robust review that considers the science and is co-led by First Nations.

Nagata says such an assessment must also offer the avenue to say ‘no,’ something that hasn’t seriously been an option for pipeline proposals up until this point.