Sharks, sea turtles, corals, wolffish — the 1,200 kilometre Laurentian Channel off the southwest coast of Newfoundland is home to tremendous biodiversity.

There’s just one catch: draft regulations for the proposed 11,619 square-kilometre protected area allow oil and gas exploration and drilling for much of the year. In addition, the government has reduced the size of the protected area by more than one-third from what was originally planned.

Documents obtained by The Narwhal paint a picture of a disturbingly close relationship between the Department of Fisheries and Oceans (DFO) and the Canadian Association of Petroleum Producers (CAPP) and provides clues of how a “marine protected area” ended up allowing offshore oil drilling.

Canada is in a hurry to classify more marine areas as “protected” to meet an international target to protect 10 per cent of its oceans by  2020. Whether an area that allows offshore drilling will even qualify as protected is the subject of heated international debate.

ICYMI: Is Canada Fudging the Numbers on its Marine Protection Progress?

But “high confidence estimates” of up to 257 million barrels of oil and four trillion cubic feet of natural gas put the Laurentian Channel in the crosshairs of conservation and resource extraction.

The documents — obtained by The Narwhal via access to information legislation — reveal that lobbying meetings took place between government and industry without being recorded properly in the federal registry and that the Department of Fisheries and Oceans provided the oil industry lobby group with an advance copy of a presentation.

The Department of Fisheries and Oceans conducted more than 30 consultations since mid-2014, when a proposed regulatory framework for the the Laurentian Channel was first distributed.

Stakeholders included the fishing industry, oil and gas players, the Shipping Federation of Canada, environmental organizations, academics, Indigenous groups and various governments. The last consultation of this kind occured on October 28, 2016, with the Canada-Newfoundland and Labrador Committee on Oceans Management.

But on the morning of the second meeting, Stephen Snow — DFO’s manager of oceans for Newfoundland and Labrador — sent an intriguing e-mail to Jennifer Matthews, a policy analyst at CAPP.

Both parties indicated that a call occured on Oct. 19 between Snow and CAPP, with the DFO manager beginning his Oct. 20 e-mail as “a follow-up from our discussion yesterday.” Then, Snow explained that he was attaching a draft presentation about marine conservation targets that he would be presenting that afternoon.

“As we have now concluded consultations with all stakeholders, we have not been giving out the presentation as it contains sensitive information from a DFO perspective that needs to be accompanied with the ‘Presenter,’ ” Snow wrote.  Following that, he specifically requested that CAPP “not share or distribute the power point and delete it as we agreed.” 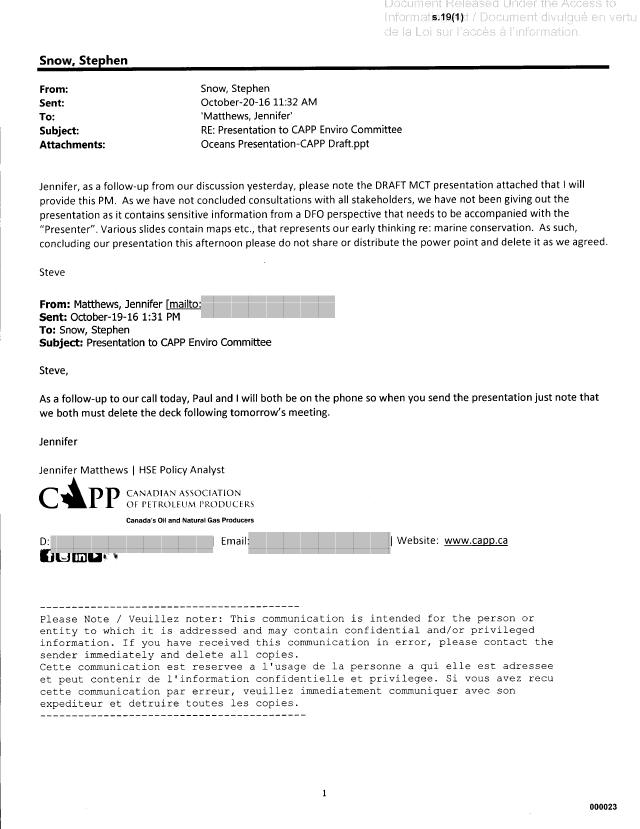 Excerpt from documents released to The Narwhal via Freedom of Information Legislation. The e-mail exchange shows Stephen Snow, DFO’s manager of oceans for Newfoundland and Labrador, requesting CAPP review, then delete, a presentation regarding marine conservation targets.

“It seems like there’s some advanced notice and even some discussions that are happening alluded to in the e-mail that would make you think there’s a little bit too much collaboration going on,” Fitzgerald told The Narwhal.

“It’s just worrying when you see people getting documents in advance of what’s supposed to be a public multi-stakeholder consultation, and being given more opportunity to prepare and an inside-track on these consultations that are supposed to put everybody on an equal footing.”

Stella Ruddock, communications officer for DFO, said in an interview with The Narhwhal that the presentation was sent out early as CAPP had employees in Halifax as well as on the ground in Newfoundland, where the meeting was held, and that it was an attempt to “try to speed up the process of getting the meeting going on time.”

Ruddock couldn’t comment on which specific maps were considered sensitive, or if it’s standard practice for DFO to send out a draft presentation to stakeholders prior to a consultation.

On June 27, 2017 — only three days after the draft regulations for the marine protected area were published in the Canada Gazette — CAPP and at least six other industry heavyweights met with DFO for 45 minutes.

That list included senior representatives from BP, Shell Canada, ExxonMobil, Nexen, Suncor and Statoil. However, e-mails from both CAPP and DFO made reference to “10 CAPP members,” suggesting more may have been present in the room.

Only CAPP and ExxonMobil actually registered the communication in the federal lobbying registry.

All companies should have registered the meeting, regardless of it being organized by CAPP, said Duff Conacher, founder of Democracy Watch.

“My opinion is that the companies violated the Lobbying Act by failing to register the meeting in the monthly communications registry,” Conacher said.

BP wasn’t even registered to lobby the federal government (and hadn’t been since 2014).

DFO wanted voluntary commitment not to drill in conservation area

A scenario note prepared for DFO’s senior assistant deputy minister of ecosystems and fisheries management Kevin Stringer noted that CAPP members “will likely raise questions on the intention of the government to prohibit or limit current or future oil and gas activities in MPAs in general, but more specifically in the proposed Laurentian Channel Oceans Act MPA.”

It also noted that DFO’s main objective for the meeting was to ascertain if CAPP would be willing to “demonstrate its marine stewardship commitment” by supporting a statement that “no calls for bid on leases in the Laurentian Channel will ever be issued in support of the long-term conservation of the area.”

It appears DFO did not meet that goal.

A summary of the meeting e-mailed out on July 10, 2017, stated that “there was some discussion about Laurentian Channel but not in detail or in any conclusive way; there was agreement to have an ongoing dialogue.”

Fitzgerald of Sierra Club said in an interview with The Narwhal that it was “quite startling” to see the number of senior representatives who met with DFO on June 27.

“I actually didn’t realize they were so interested in this piece of marine seascape,” she said. “But I think to them, it’s about their right to all the oceans on the East Coast of Canada. That’s the only reason they would assemble such a cast of characters.”

Following the publication of the draft regulations on June, there was a 30-day window for public comment.

On July 21, three days before the window closed, CAPP sent its final comments to DFO. Signed by Paul Barnes — the director of the Atlantic Canada and Arctic regions for the association — the letter outlines CAPP’s argument for why it thinks that seismic and drilling activity in the region wouldn’t be seriously harmful to species and ecosystems.

Specifically, CAPP emphasized there have been no documented marine mammal injuries or deaths as a result of seismic surveys. In addition, it noted that impacts of drilling and production at two large offshore sites in Atlantic Canada have had negligible impacts on sediment and water quality monitoring.

Rodolphe Devillers, geography professor at Memorial University of Newfoundland and lead researcher at the Marine Geomatics Research Lab, reviewed CAPP’s final submission and said in an interview with The Narwhal that the facts presented appear accurate. However, he added the caveat:  “It’s just always a question of what facts they select in their letters and not others.”

For example, it’s true that there haven’t been any documented marine mammal mortalities as a consequence of seismic surveys, as it’s very difficult to relate deaths to specific sources.

It’s also consistent with the conservation objectives listed in the federal government’s draft regulations, with a particular focus on preventing “human-induced mortality.”

But as noted by Devillers, the overarching objective of the MPA is to “conserve biodiversity through the protection of key species and their habitats, ecosystem structure and function, and through scientific research.”

To him, and many other ocean scientists, that overarching objective requires the prevention of a wide range of disturbance and harms, not just deaths — something largely unknown due to a lack of scientific studies in the region.

“We do know as scientists that seismic activities do have a number of impacts, which can be loss of hearing, challenges to feed and communicate … Those affect the primary objective of the MPA.”

A 2013 report by Dalhousie University biologist Lindy Weilgart concluded that at least 37 marine species have been shown to be impacted by seismic testing, and that airgun noise “must be considered a serious marine environmental pollutant.”

On June 22, 2017 — incidentally, a single day before the government released its draft regulations — an article was published in Nature Ecology & Evolution that concluded seismic surveys can double or triple the death rates of zooplankton within a 1.2 kilometre radius. The authors wrote: “Significant impacts on plankton by anthropogenic sources have enormous implications for ocean ecosystem structure and health.”

In the final submission, CAPP said that no drill waste or petrogenic hydrocarbons have ever been detected “outside the 500 metre safety zone during drilling or operations phases” of nearby offshore projects. But Devillers noted that “even if it’s within 100 metres, it’s an impact on the ecosystem.”

“Sometimes things go wrong,” he said. “How willing are we to accept that things can go wrong? Even if it’s one chance in 50 years or something, that’s not acceptable. And they cannot guarantee that this will not happen.”

A simple solution to all of this would be to amend the Oceans Act to prohibit all extractive activities in Marine Protected Areas, said Linda Nowlan, staff lawyer with West Coast Environmental Law.

Nowlan suggested the federal government should take advantage of its ongoing amendments to the Oceans Act to prohibit all “harmful activities,” including oil, gas and mineral exploration and development.

“It sets the bar from the start so industries can’t go into negotiations and whittle down protection, which is what seems to have happened in Laurentian Channel,” Nowlan said.

The government is expected to release the final regulations this year.

James Wilt is a freelance journalist based in Winnipeg, Manitoba. He holds a journalism degree from Mount Royal University in…