How scientists are giving Fraser River salmon a fresh chance

A subtle transformation to a century-old jetty is giving new hope to recovery efforts for the fish and their No. 1 predator, the endangered southern resident killer whale

The sight of dozens of tiny chum and chinook salmon funnelled into a trap by special nets sent biologists from Raincoast Conservation Foundation into an excited frenzy of high-fives as they squelched through the muddy waters of the Lower Fraser tidal marsh.

“We were in our waders, waving our nets and jumping up and down in the estuary,” said Misty MacDuffee, Raincoast’s wild salmon program director.

As the group was setting the nets in March, weeks after knocking holes in the Steveston jetty, it was difficult to see the fish because of cloudy water, but then it became apparent that juvenile salmon were moving through the newly created passages into the relative safety of the marsh, said Dave Scott, Raincoast’s Lower Fraser salmon program coordinator.

“We were ecstatic to see it was working. Seeing those fish made us realize that what we were doing was really necessary,” he said. 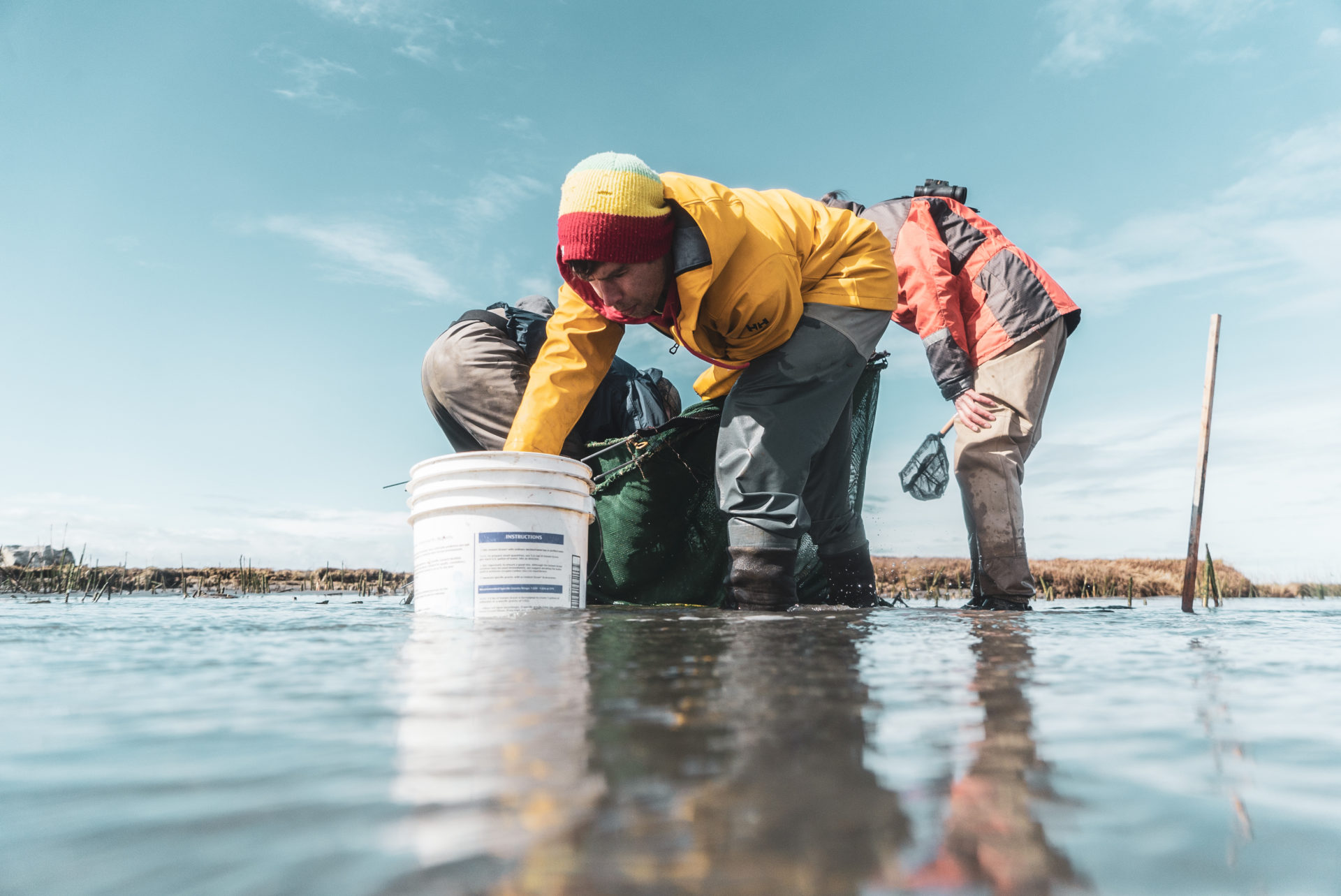 The importance of estuaries

It is rare for a habitat restoration project to show such instant signs of success, but creating breaches in the eight-kilometre Steveston jetty, which controls the main arm of the Fraser River as it enters the estuary, offered an almost immediate payoff.

The jetty, constructed from rock rubble between 1911 and 1933, means juvenile salmon leaving their freshwater birthplaces are blocked from the calm side channels of the estuary. So, instead of spending time growing and feeding in the brackish marshes of Sturgeon Bank, they are likely to be whooshed out into the Strait of Georgia before they adjust to salt water living.

The fish, which are less than five centimetres long at that stage in their lives, must go through physiological changes before they head out to sea. 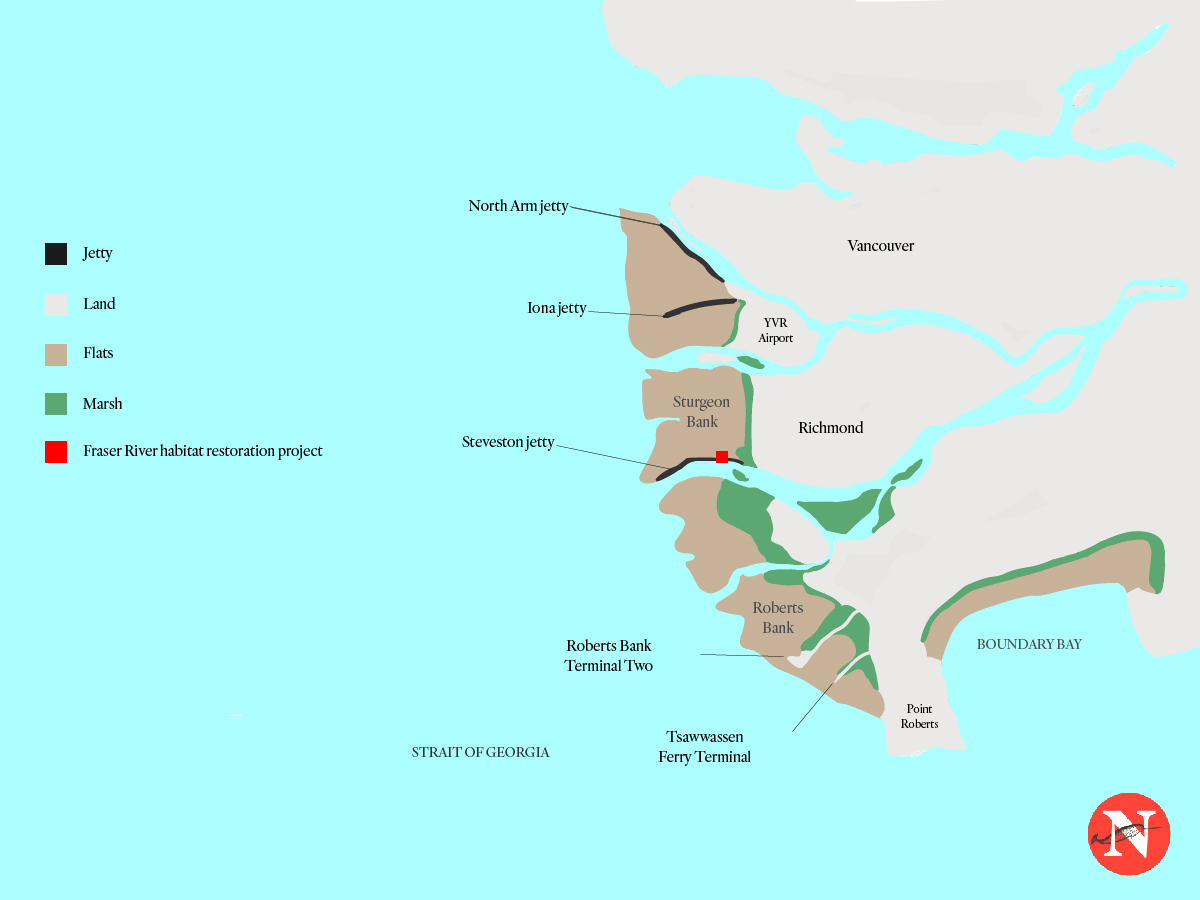 The lower Fraser River. The Steveston jetty prevents juvenile salmon from accessing the estuary zone in Sturgeon Bank. A habitat connectivity project managed by the Raincoast Conservation Project is changing that. Map: Carol Linnitt / The Narwhal

As salmon move from freshwater, where they have been incubated as eggs, they are transformed through a smoltification process before they hit salt water, said Murray Manson, restoration biologist with Fisheries and Oceans Canada, which is funding the project through the federal government’s coastal restoration fund.

But that is not easy for small fish in the Fraser where jetties and dredging in the main channel are designed to move water to the ocean as fast as possible. The original aim was to help ships navigate their way quickly into the Strait of Georgia and stop sediment gathering in the main shipping channel.

There is one opportunity for the fish to make an exit and get into the marsh in front of Sturgeon Bank and, if they miss it, they are pushed out into the Salish Sea, MacDuffee said.

“If you are a tiny little fish who wants to stay in shallow, fresh protected water, Georgia Strait is not where you want to end up,” she said. 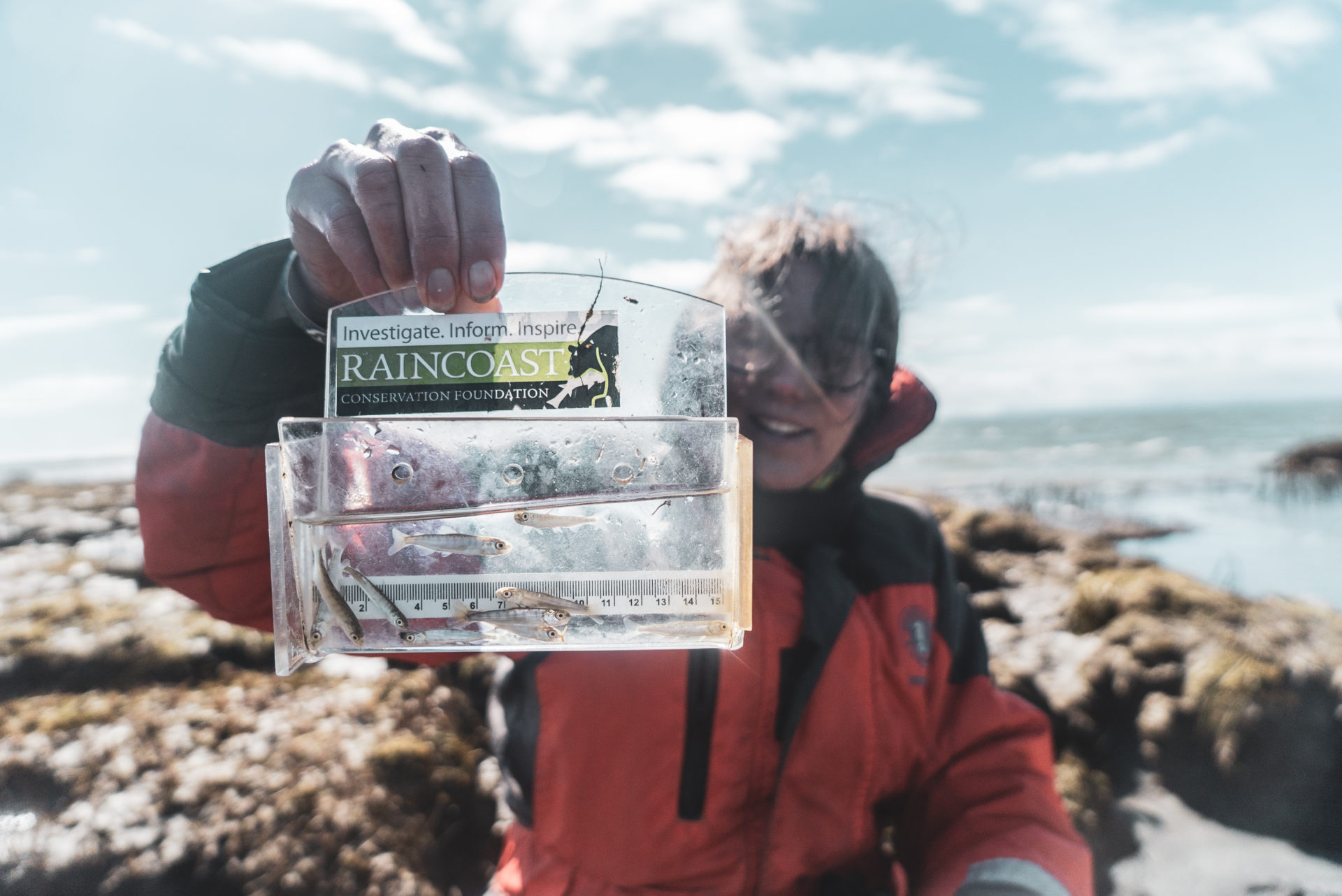 “They don’t want to go out there until they have been able to spend time acclimatizing and going through this physiological transformation. They are moving from freshwater, where they are always trying to keep their mineral balance and their salts held in, to going into salt water where they are always trying to keep salt from getting into their bodies. Everything has to reverse for them,” she said.

So, at a time when the Committee on the Status of Endangered Wildlife in Canada (COSEWIC) is reporting that eight of B.C.’s chinook populations are endangered, four are threatened and one is considered of special concern, the sight of the young chinook and chum using breaches in the jetty to get to safer waters was inspiring.

“There they were, just moving through all the channels that had just been created. One of our engineers said that, if we just get all the rock and hard material that forms the jetty out of the way, nature will do the rest. Nature will carve the path through the marsh, behind the breaches,” MacDuffee said.

The initial work, researched by Raincoast biologists, saw a clamshell dredger chomping lumps out of the jetty and it is expected that when the Fraser is running high it will scour out the breaches, naturally helping the process. 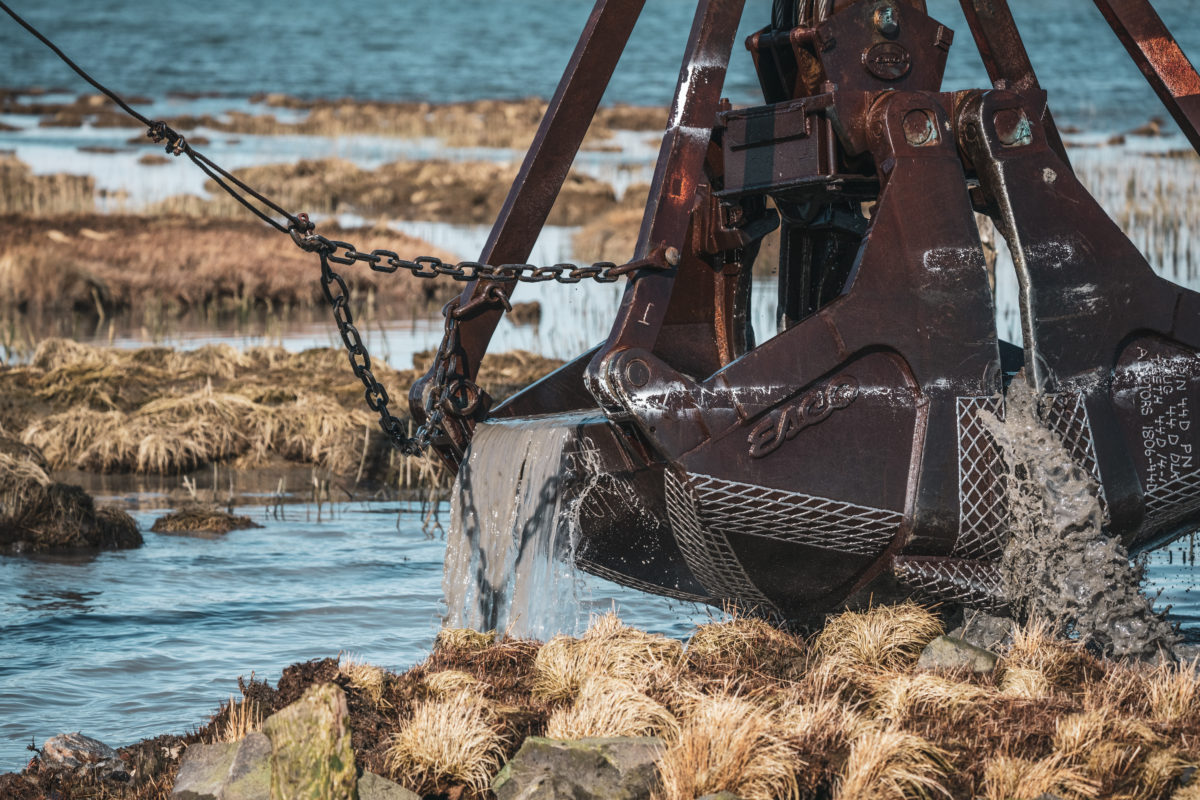 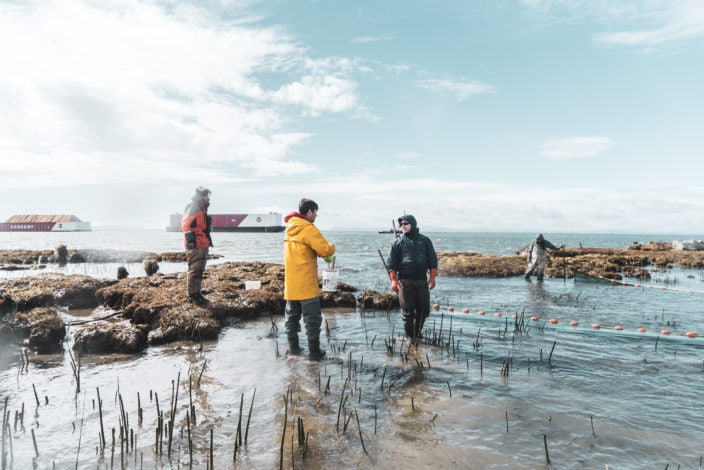 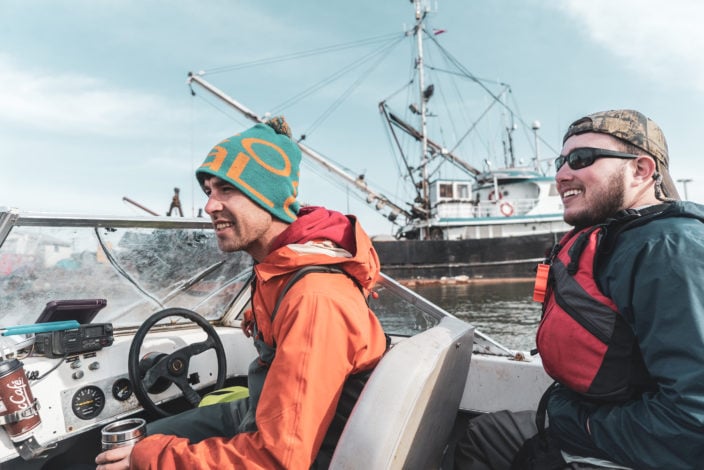 Provided ongoing monitoring shows the plan is continuing to work, the 50-metre wide breaches will be deepened next year.

“The breaches are being cut in two phases. We will see how they behave over the next couple of months and then we will hopefully cut down a little deeper so (the jetty) is open over a broader range of tide cycles,” Manson said.

“Sometimes people aren’t even aware that large areas of land used either for terminals or even neighbourhoods are built on infilled marshland that used to be tidal and used to have small channels that the juvenile chinook would move into,” he said.

“You couldn’t really plan out out a better way to try and remove a species.”

The breaches, while are unlikely to affect shipping, are likely to provide side benefits to areas such as Delta and Richmond as the changes are expected to improve the Sturgeon Bank ecosystem by washing fine sediment into the marsh instead of powering it out to sea.

“The area we are connecting the river to is really being starved of that sediment. It is being forced out into the middle of the Strait instead of helping build a healthy delta and a healthy marsh. We are hoping and expecting that by providing more fine sediment along Sturgeon Bank it will help the delta grow and the delta is the City of Richmond’s primary defence against sea-level rise,” Scott said. 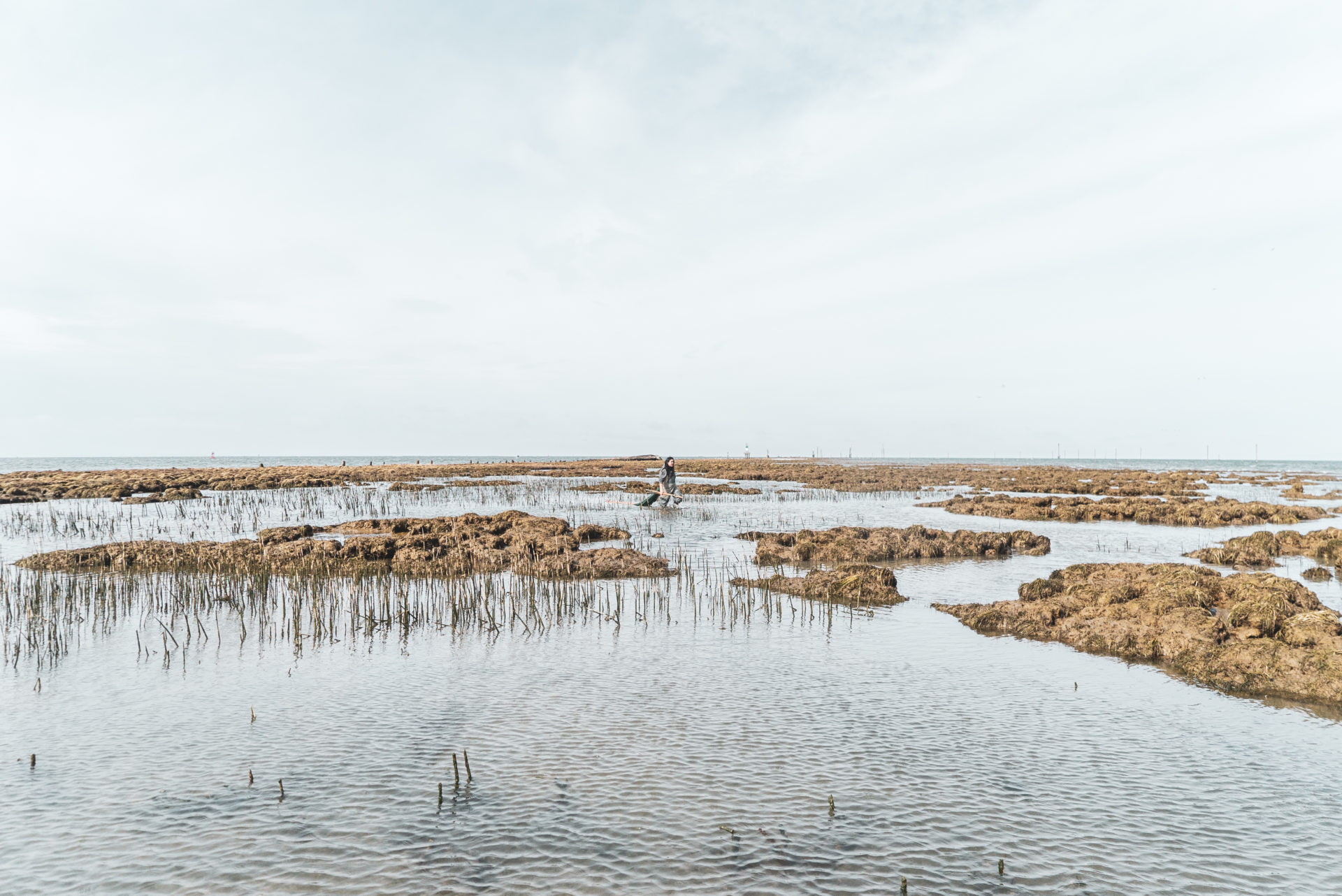 Hopes are running high that restoring parts of the Lower Fraser habitat to help struggling chinook populations will also provide more food for the dwindling population of southern resident killer whales, whose primary source of food is chinook.

“The best investment both for chinook salmon and for southern resident killer whales is in restoring wild salmon populations — getting away from hatcheries — and getting the habitat back so the salmon can come and spawn in the places they have spawned for thousands and thousands of years,” MacDuffee said.

“The recovery of wild salmon is the best hope for the southern resident killer whales.”

The three southern resident killer whale pods have been reduced to 74 animals and studies have established that the greatest threats faced by the whales are lack of prey, contaminants and noise disturbance. The whales will face additional threats from increased oil tanker traffic if the Trans Mountain pipeline expansion is approved by the federal government in June.

“When we thought about priorities for the (coastal restoration) fund, right at the forefront was trying to get chinook populations in better shape, not only for the chinook, but for the species that rely on them like southern resident killer whales,” Manson said.

The initial success of the project shows that small-scale habitat restoration projects can make a significant difference, Scott said.

While big dams on rivers such as the Snake in Washington State, which block adult spawners, are an obvious impediment to salmon population recovery, smaller scale projects can have a noticeable impact, he said.

“They may not be as obvious as those really big pieces of infrastructure but these smaller ones can be really important,” Scott said.

The aim of the $75-million coastal restoration fund — part of the federal five-year, $1.5-billion oceans protection plan — is to restore vulnerable coastline areas and protect marine life and ecosystems.

In addition to the five-year Raincoast project, which is receiving $2.7 million, other projects on the Lower Fraser include a similar effort by Ducks Unlimited Canada and a project in partnership with the Fraser Valley Watersheds Coalition, to reclaim a gravel pit near Hope that has become a killing ground for young salmon.

The Tom Berry Gravel Pit, which was used during construction of the Coquihalla Highway in the 1980s, is beside the Fraser River and floods every year during the spring freshet, trapping young salmon, which are then stranded when the water recedes.

The project is returning the gravel pit to natural floodplain habitat, so small fish will be able to return to the river instead of dying in the pit.

But more needs to be done, MacDuffee emphasized.

“The most important thing is we have to stop destroying what’s left of the habitat in the Lower Fraser. There are a lot of proposals in the works right now that would erode and degrade those remaining stretches of habitat that still function,” she said pointing to LNG storage and export proposals and the Terminal Two plan, now under review, to expand cargo handling capacity at Roberts Bank.

“We have got to stop making the mistakes of the past and making decisions to facilitate industry … At a time when we need to be going in the other direction and restoring lost habitat, we are still undercutting and undermining the habitat that we have,” she said.

Banner: Misty MacDuffee, Raincoast's wild salmon program director, drags a net in the Lower Fraser River along the Steveston jetty. Photo: Alex Harris / Raincoast Conservation Foundation
We hear it time and time again:
“These are the stories that need to be told and you are some of the only ones telling them,” John, a new member of The Narwhal, wrote in to say.

The Chiefs of Ontario are calling on the Ford government to repeal the More Homes...

In a letter obtained by The Narwhal, a lobby group for builders and developers expresses...

B.C. vows to reverse ‘short-term thinking’ with pledge to protect 30% of province by 2030

Advocates say Premier David Eby’s conservation mandate is an ‘important step’ in the fight against...