Police made arrests Monday on the Morice River bridge, the sole entrance point to the Unist'ot'en land-based healing centre
By Amber Bracken
Share
Freda Huson, Unist'ot'en spokesperson and founder of the Unist'ot'en healing centre, sings in ceremony as RCMP approach to arrest her during their enforcement of a Coastal GasLink court-ordered injunction against those blocking work on a gas pipeline on Monday, Feb. 10, 2020. Photo: Amber Bracken / The Narwhal

Members of the RCMP arrested seven individuals outside the Unist’ot’en healing centre Monday during the fifth day of enforcing a court-ordered injunction against members of the Wet’suwe’ten and their supporters blocking access to work sites for the Coastal GasLink pipeline.

The arrests were made at the 66-kilometre mark of the Morice River Forest Service Road at a bridge crossing a river along the 670-kilometre pipeline’s route.

Around 80 individuals have been arrested at Wet’suwet’en camps along the road and at solidarity actions taking place across the country.

Coastal GasLink was granted an injunction originally in December 2018 and the court order was renewed December 2019. Although the pipeline received approval from elected band members, hereditary chiefs of the Wet’suwet’en nation, representing five clans, have rejected the pipeline and asserted sovereignty over the nation’s traditional territory.

An RMCP helicopter takes off after Unist’ot’en spokesperson and founder, Freda Huson, refused to negotiate surrender with the police on Feb. 8. Photo: Amber Bracken / The Narwhal

A woman is arrested as police enforce the injunction at the Unist’ot’en camp on Monday Feb. 10. Coastal GasLink, a subsidiary of TC Energy (formerly TransCanada Corp.), is building a 670-kilometre pipeline to supply fracked gas to the LNG Canada facility in Kitimat. The $6.6 billion pipeline, which will start near Dawson Creek, will have a lifespan of 30 years, according to TC Energy. Photo: Amber Bracken / The Narwhal

Karla Tait, director of clinical services at the Unist’ot’en healing centre, makes an offering to the river on Feb. 8. Part of the pipeline travels through the traditional territory of the Wet’suwet’en nation in B.C.’s interior. Hereditary chiefs from all five of the nation’s clans are opposed to the project and, since 2009, they and their supporters have re-occupied land along the pipeline route. In a 1997 court ruling known as the Delgamuukw decision Supreme Court justices declared that nations like the Wet’suwet’en, who had never signed treaties, still hold unceded rights to their lands. Photo: Amber Bracken / The Narwhal 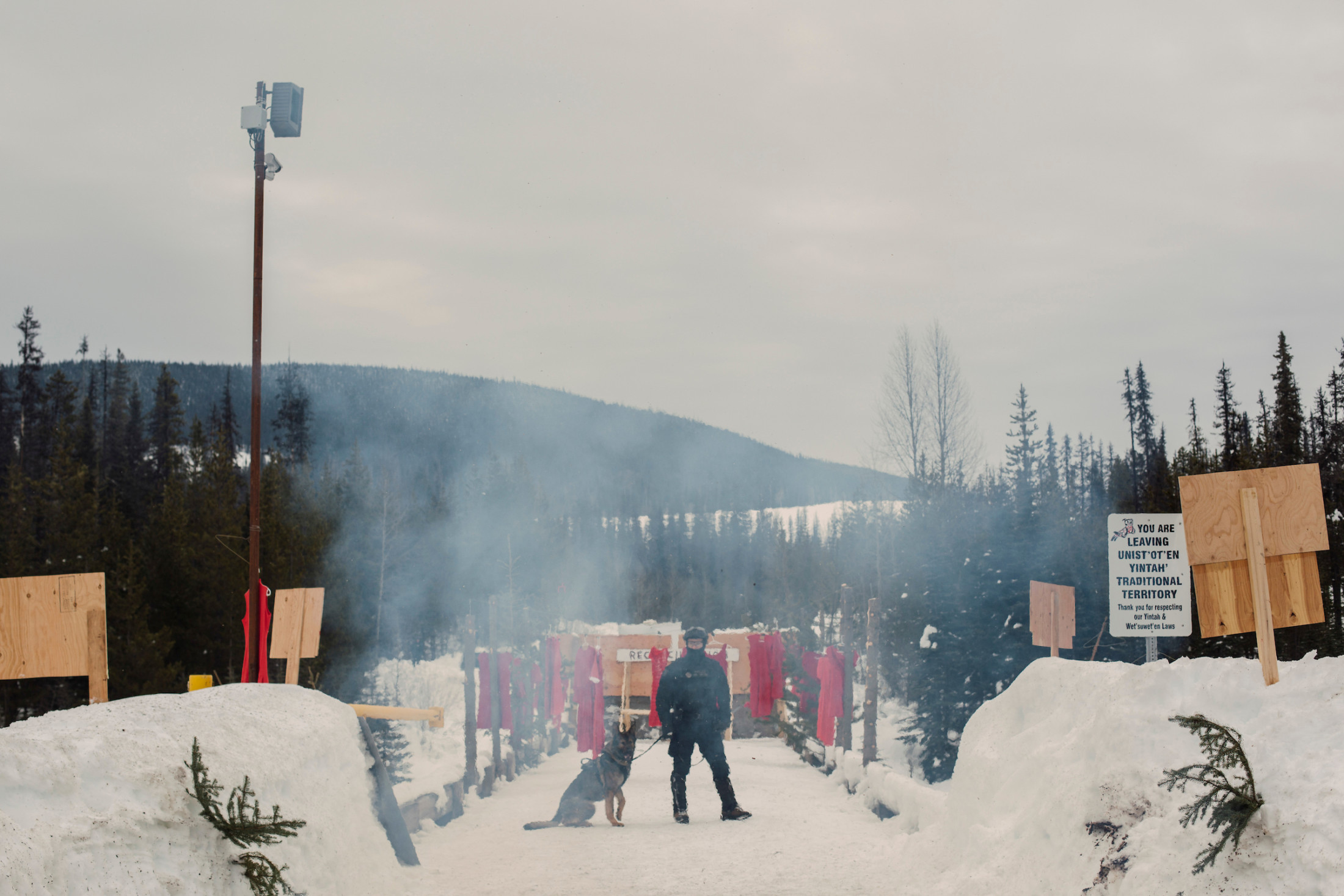 An RCMP officer stands near the Morice River bridge, the only entrance point to the Unist’ot’en healing centre and sole access road to Coastal GasLink work sites. A barrier built across the bridge bears a sign saying “Reconciliation,” which was disassembled by workers in yellow vests. Photo: Amber Bracken / The Narwhal

A Nlaka’pamux supporter brushes snow off of a red dress, as she waits for police on Feb. 8. Photo: Amber Bracken / The Narwhal

Work camps for large resource projects like the Coastal GasLink pipeline bring an influx of transient workers. The final report for the National Inquiry into Missing and Murdered Indigenous Women described the connection between transient workers and higher rates of sexual harassment and assault, women entering the sex trade and sexually transmitted diseases. More than 1,700 Indigenous women and girls have gone missing in Canada, according to the national inquiry. Photo: Amber Bracken / The Narwhal

Karla Tait, psychologist and Unist’ot’en house member, is arrested Feb. 10. Tait, who is the Unist’ot’en healing centre’s clinical services director, says the purpose of the centre is under threat from pipeline construction activities. Photo: Amber Bracken / The Narwhal

A supporter waits for police to enforce Coastal GasLink’s injunction on Saturday Feb. 8. The RCMP moved in to make arrests on Feb. 6 even though Coastal GasLink does not have authorization to proceed with construction in the area where the hereditary chiefs, other Wet’suwet’en members and their supporters were staying. The B.C. environment ministry confirmed on January 29 that one condition of Coastal GasLink’s environmental assessment certificate, issued in 2014, has not been met. Photo Amber Bracken / The Narwhal

Camp supporters watch a video of the early morning arrests at supporter camp located at the 39-kilometre mark on the Morice River Service Forest Road on Feb 6. Photo: Amber Bracken / The Narwhal

A supporter waits for police to arrive at the Unist’ot’en camp on Feb. 6. At the centre of the dispute over pipeline construction is a $2 million Unist’ot’en healing centre, which has received $400,000 from B.C.’s First Nations Health Authority to run land-based trauma and addictions treatment programs. The healing centre is several hundred metres from a former, dead-end logging road along which hundreds of workers will travel to a nearby work camp. Photo: Amber Bracken / The Narwhal

Freda Huson, left, looks at pictures of the early morning arrests at a supporter camp at the 39-kilometre mark of the forest road, with her sister Brenda Michell, centre, and niece, Karla Tait on Feb. 6. As the RCMP removed journalists and photographers from the scene, the B.C. Civil Liberties Association issued a press release saying it had received disturbing information about reporters being “detained, threatened with arrest, and given instructions from RCMP about what they can photograph, including instructions not to photograph tactical gear.” Freedom of the press, the civil liberties association noted, is enshrined in the Canadian Charter of Rights and Freedoms. Photo: Amber Bracken / The Narwhal

Coastal GasLink workers take down an installation of red dresses, hung to signify Missing and Murdered Indigenous Women. “We put a call out for red dresses to be sent here, inviting anyone to send red dresses in honour of any missing and murdered Indigenous women in their lives and to help us raise awareness and visibility as Coastal GasLink workers were traveling into our territory and doing pre-construction work,” Karla Tait, who is a Unist’ot’en house member, told The Narwhal. Photo: Amber Bracken / The Narwhal

Unist’ot’en camp founder and spokesperson, Freda Huson, said the Unist’ot’en camp is located 66 kilometres from the infamous Highway of Tears, notorious for its connection to the disappearance and murder of Indigenous women in B.C., many of whom she knew personally.
“Some of them are family, extended family, cousins and children. The latest one was our cousin’s daughter-in-law, left a one-year-old baby behind,” Huson told The Narwhal. Photo: Amber Bracken / The Narwhal

An RCMP helicopter circles a ceremonial fire while police enforce Coastal GasLink’s injunction. The Union of B.C. Indian Chiefs called the raids “senseless violence.” UBCIC president Grand Chief Stewart Phillip said, “we are in absolute outrage and a state of painful anguish as we witness the Wet’suwet’en people having their title and rights brutally trampled on and their right to self-determination denied.” Photo: Amber Bracken / The Narwhal 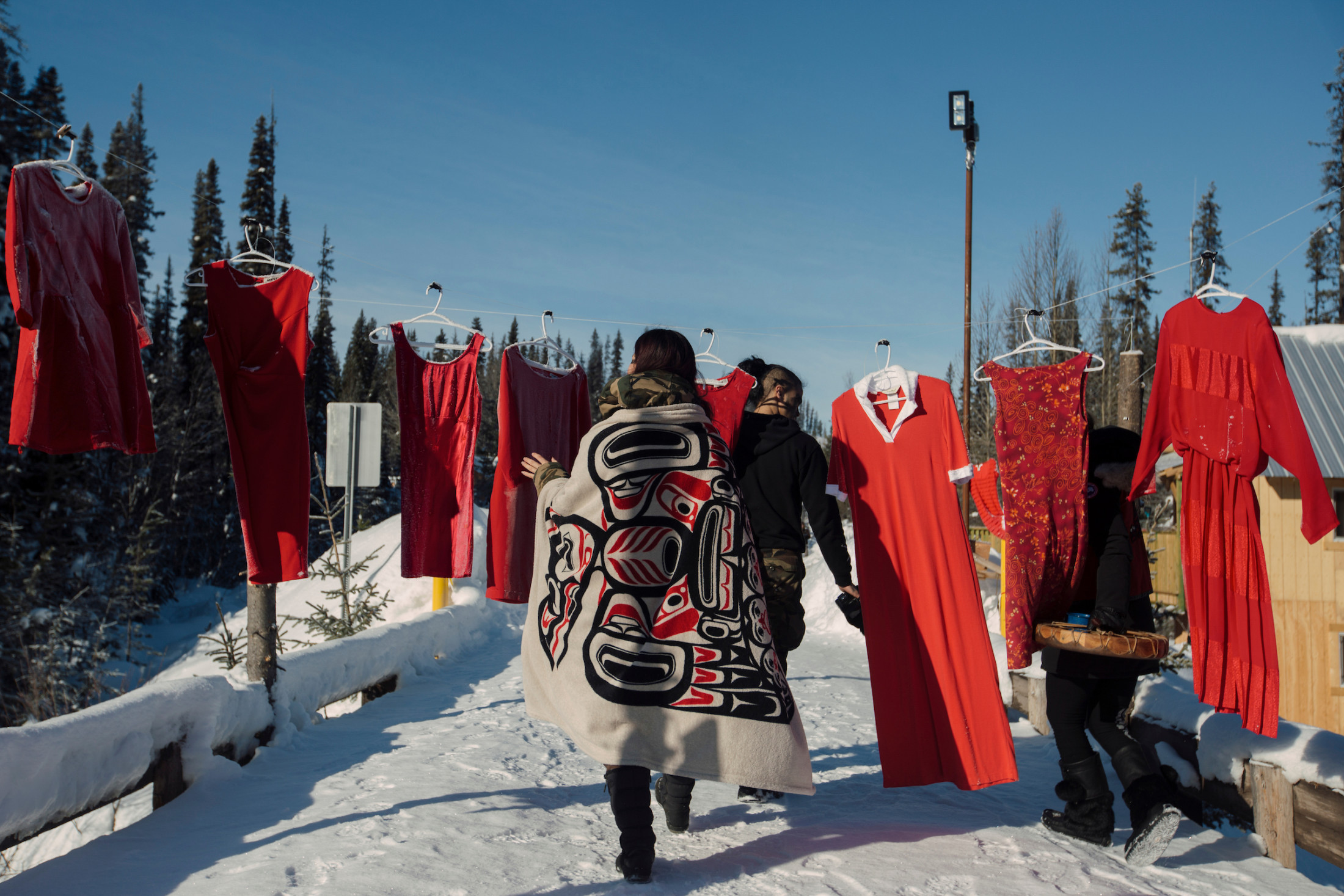 Supporters walk past red dresses as they wait for police on Feb. 8. Photo: Amber Bracken / The Narwhal

— With files from Sarah Cox and Carol Linnitt.

Banner: Freda Huson, Unist'ot'en spokesperson and founder of the Unist'ot'en healing centre, sings in ceremony as RCMP approach to arrest her during their enforcement of a Coastal GasLink court-ordered injunction against those blocking work on a gas pipeline on Monday, Feb. 10, 2020. Photo: Amber Bracken / The Narwhal

Amber Bracken
Based in Edmonton, Amber Bracken is a lifelong Albertan and covers assignments across the province and farther from home. After ge...