Derek Michel lights up a cigarette near his tent on a small island on Christie Bay in the East Arm of Great Slave Lake. “I know every nook and cranny around here,” he says, taking a drag. “You do this as long as I have and the lake becomes your home.”

A fishing guide from the nearby community of Lutsel K’e, Michel is one resident hoping that the proposed Thaidene Nene National Park comes to fruition. It would be the first federally proposed park in the Northwest Territories to be co-managed by Parks Canada and a First Nation.

“To have tourists come here and have local people be the guides and monitors [for the park] only makes sense,” he says. “This is our home, so of course we should be the stewards of it.”

In the last federal budget, $25 million in funding was set aside for the Indigenous Guardians Program. Programs like these help Indigenous communities become stewards of their ancestral lands, as land/water monitors, park rangers and environmental advisors in addition to building capacity for community-led initiatives.

Dehcho First Nations Chief Herb Norwegian refers to these programs as putting “moccasins on the ground,” where community-driven conservation initiatives are built by the communities themselves, using traditional knowledge and science to protect their homelands.

In small, remote Northwest Territories communities like Kakisa, Lutselk’e, Jean Marie River and Fort Good Hope, people are getting back to the land as a way to create jobs, bridge the gap between elders and youth and cope with intergenerational trauma wrought by residential schools and other manifestations of colonialism.

Frank Hope, a Dene counsellor and motivational speaker, says that being on the land is a spiritual experience.

“This is a continual renewal and relearning to be like our ancestors who were resilient in surviving — and thriving — on the land,” he says.

Since the fall of 2015, I’ve been working with various NGOs and First Nations in the Northwest Territories to photograph Indigenous-led conservation programs, elder and youth camps and tourism initiatives in small, remote communities.

Through these images and stories, my hope is to show how people are reconnecting with their ancestral homelands and how crucial it is for the land and water to be protected so those who live here can sustain their culture, food sources and livelihoods.

Billy Norwegian points to an incoming storm as a group of elders land on the shore of Ekali Lake, N.W.T. Programs on the land encourage youth and elders to come together and learn long-held traditions, as well as newer technologies.

Percy Simba sits by a fire at a fall hunting camp at Tathlina Lake, N.W.T. For the previous three years, residents from the community of Kakisa were unable to attend the annual fall harvest due to wildfires. Now, the community returns to share in food, culture and simply reconnect as a community on their traditional territory.

Gabe Chicot pulls a pot of coffee from the fire at a camp at Tathlina Lake, N.W.T.

Joanne Minoza and Sahtle Tsetso keep an eye on the storm clouds overhead while boating back to camp on Ekali Lake, N.W.T.

Presley Simba-Canadien comes face to face with the realities of life, death and food. It’s important for families to expose children to harvesting.

Lloyd Chicot, Chief of the Kakisa Dene First Nation, scouts for moose and beaver along the shoreline of a river. “You can’t go far without seeing a seismic line or some sign of resource development,” he says.

The traditional home of the Kakisa Dene First Nation is at the tributaries of Tathlina Lake.

A collection of fish and hides is smoked inside of a tipi at a camp near Lutsel Ke, N.W.T.

Families watch a group of men and boys play traditional handgames at a camp near Lutsel Ke, N.W.T.

Ron Desjarlais chucks a whitefish into a bucket near Lutsel K’e, N.W.T.

A group of women swim in the Mackenzie River during a trip with the Dehcho First Nations to learn about the river and the communities it passes. Photo: Pat Kane

Alina Enggist, Itoah Scott-Enns and Kite Ellis take an evening ride in a jet boat along the Mackenzie River.

Murray McNeely and Naomi Gully idle on a snowmobile at the Ramparts River, N.W.T., and look for moose through the thick morning fog.

Floyd Kakfwi chips ice from a river so he can lay fish nets underneath.

Floyd Kakfwi seasons fish and steaks on a campfire. After a long day of hunting, dinner is finally prepared. 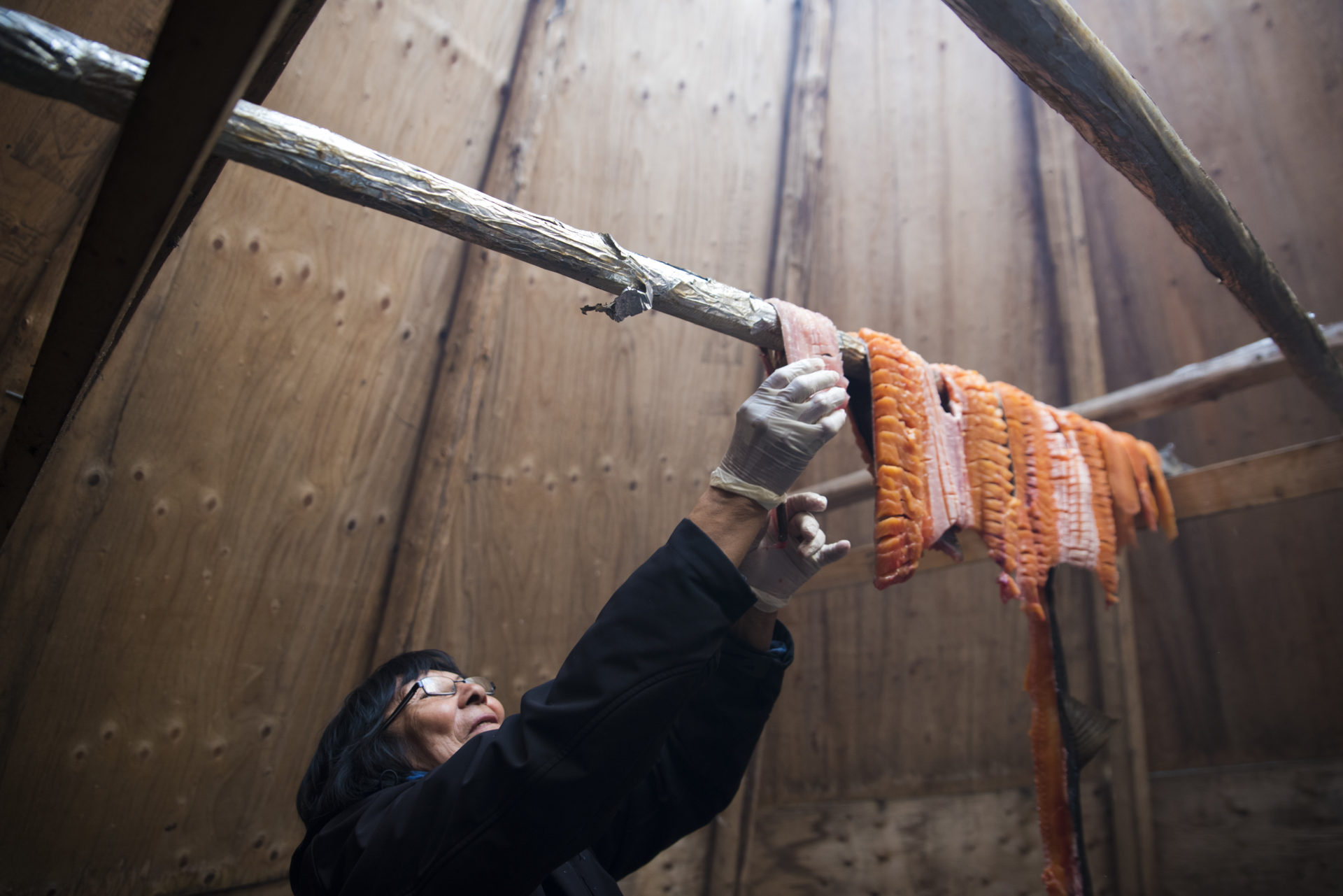 Dora Blondin hangs trout from Great Bear Lake in a tipi. The area near the lake and the community of Deline was recently named a UNESCO biosphere reserve, and the residents of the community are the stewards.

Elizabeth Arrowmaker watches an old DVD of a drum dance in her living room. The community of Wekweeti, N.W.T., is beginning to invest in tourism and hopes to draw visitors to their community.

Derek Michel relaxes by his tent on Barren Island after a long day of guiding around Christie Bay, site of the proposed Thaidene Nene National Park.

Brian Sanderson and his children in Lutsel Ke, N.W.T.

Residents of Behchoko, N.W.T, makes their way to Whitebeach Point, an area where mining companies want to develop silica for use in fracking. Photo: Pat Kane

Kids play in the water at Whitebeach Point, N.W.T. Resource companies want to mine the sand for silica, which is used in hydraulic fracturing.

Former Deline chief, George Cleary, wears a jacket made of caribou and looks out over the community while standing against a drying moose hide. Cleary remains a popular figure in the community, as a respected educator and leader.

Andrew Sewi and Jonathan Tetso cut wood near the shore of Deline.

Friends play on the swings at one of Deline’s playgrounds.

Banner: Tania Larsson stands watch on the shore of Great Slave Lake. She's a member of Dene Nahjo, an organization of young leaders looking to advance social and environmental rights for Indigenous people in the NWT. Their motto is “Land, Language and Culture Forever.” Photo: Pat Kane
We hear it time and time again:
“These are the stories that need to be told and you are some of the only ones telling them,” John, a new member of The Narwhal, wrote in to say.

Pat Kane
Pat is a photographer in Yellowknife covering people, life and culture in Canada's North. He works closely with First Nations and ...