Some teachers are reinventing the way students are educated about climate change, but it’s far from the norm — and with a looming UCP curriculum overhaul, students and teachers are left worrying about what’s next
Sarah Lawrynuik
Jul 10, 2019
10 min read

Alberta’s curriculum currently calls for students to be taught the basics of climate change. But young people studying in Alberta high schools have found those lessons vary from classroom to classroom — and from teacher to teacher.

Some students say a climate change education is missing altogether.

For example, the Grade 10 science curriculum includes in its “key concepts,” both “social and environmental contexts for investigating climate change” as well as “human activity and climate change.” An aim of social studies classes is to “assess the impact of human activities on the land and the environment.”

Students say that’s one thing in theory and another in practice.

Faline Darling, 18, is about to graduate from a high school in Calgary, Alta. “None of my courses have ever taught me anything about climate change,” she said.

“I remember in middle school it was something we briefly touched on but at that point in time it was still, ‘Do you believe in climate change?’ And that was the question that was being posed.”

Kiera Williams, 16, shared a similar experience with The Narwhal. “We mentioned [climate change] briefly in science, and the teacher — she’s really funny — she was like, ‘OK and that just sucks.’ And then we just moved on.”

Is the curriculum the problem?

Alberta’s curriculum is in the process of a complete overhaul initiated by the previous NDP government before being handed off to the United Conservative Party when it won the spring election.

Given the past comments of Alberta’s Premier Jason Kenney it seems unlikely that a new curriculum will have an increased focus on climate change.

In 2017, Kenney attacked the proposed curriculum review that was going to add focus on climate change and Indigenous history. At the time, he said the NDP was engaging in “social engineering” in order to impose “political correctness” on students.

Kenney has said he believes man-made climate change is real, but he also supports MLAs who have a “spectrum of views” on the topic — views that often stand in contradiction to the available scientific evidence.

How these views will impact a curriculum update remains to be seen.

This comes at a time when youth climate strikes — inspired by 16-year-old Swedish climate activist Greta Thunberg — have become increasingly commonplace. Under the Fridays for Futures banner, students have been walking out of classes to advocate for meaningful action to address the climate crisis in more than 130 countries across the globe — including a march last month at the Alberta legislature.

The office of Alberta’s Minister of Education Adriana LaGrange told The Narwhal by email that she is “being briefed on a number of priorities, including the curriculum review. More information is anticipated in the coming weeks and months.”

In the meantime, The Narwhal took a trip to Calgary’s Central Memorial High School to get a sense of how some teachers are turning things around and engaging students on climate change.

Walking into the energy and environmental innovations class is a bit of a shock to the senses — a stark contrast to the bustle of teenage life outside its doors.

There’s the gentle sound of the trickling water flowing through the plant wall and into the tank of tilapia. On the far side of the workshop, several students cut and sand wood into rustic, live-edge benches and tables — using only recycled or upcycled wood, of course.

Then off to the side, a door leads to a regular classroom where a handful of students sit with their teacher, Mr. Robb, writing a presentation that will be given to partners at one of Seattle’s biggest green-architecture firms on the next class field trip.

This unusual and specialized class is run and developed by Adam Robb, who won Canada’s environmental educator award this year, and represents his effort to engage students with the environment and science education through hands-on, self-driven learning.

In Alberta, this sort of environmental education is fairly unique, and Robb is motivated by memories of his own education, which he often felt was lacking.

“I think I was doing dioramas and bristol board presentations,” Robb said. “I remember sitting in class feeling like I had all this energy to give, I was very conscious of it, and being very frustrated that all we are doing that day was copying down notes, or reading out of the textbook and filling in fill-in-the-blanks.”

“The real learning I’ve done in my life is when I’ve needed to learn something and I want to present students with those opportunities.” 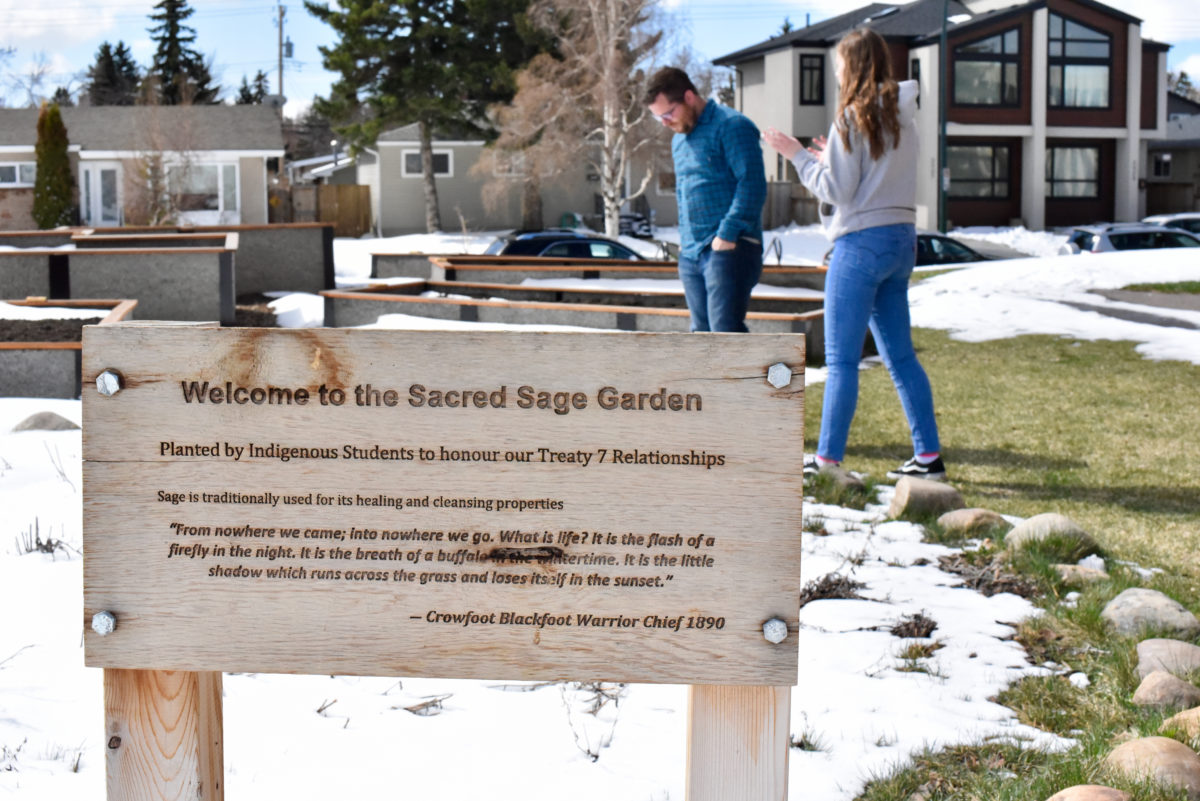 Kiera Williams, 16, stands with her teacher Adam Robb in a new community garden as they plan out where to put benches (made by the class) to encourage locals to come and spend time in the garden. Photo: Sarah Lawrynuik/The Narwhal

‘We go out and stand on the glacier’

The energy and environmental innovations class differs in its approach in that it puts climate change front and centre — something not all teachers are willing, or able, to do in Alberta.

The class has offered students the opportunity to join in on myriad projects, all sharing the common thread of understanding the impacts of climate change‚ both globally and locally. Over the course of nearly four years, students have negotiated approval from the City of Calgary as well as the Calgary Board of Education to commandeer a jointly owned segment of land to convert into a community garden that opened this spring.

Other students have participated in policy-heavy initiatives, like being a part of the Intergovernmental Panel on Climate Change meetings in 2018 in Edmonton. One created a youth advisory committee to work with Parks Canada on sustainability initiatives. Another of the proposals resulted in the former provincial NDP government committing $9 million to installing solar panels on school roofs.

When asked how much knowledge students generally have about climate change when walking into his class, Robb laughs. “One in 20 students will be a diehard advocate on climate change, environmentalism — the type of kid you would assume would choose to take an energy and environment course,” he said.

“The other 19 have zero concept of climate change. We’re starting from square one and the basic science of the greenhouse effect.

“We learn it in a way that’s not, ‘Here’s the worksheet on what climate change is about.’ We learn it by looking at water temperature in rivers. We look at the amount that the Athabasca Glacier has receded. We go out and stand on the glacier. We talk about pine beetles.

“We talk about all these real tangible things that students can experience and feel for themselves.”

All of this, Robb says, empowers students to take action on climate change.

But the class is the exception to the rule. 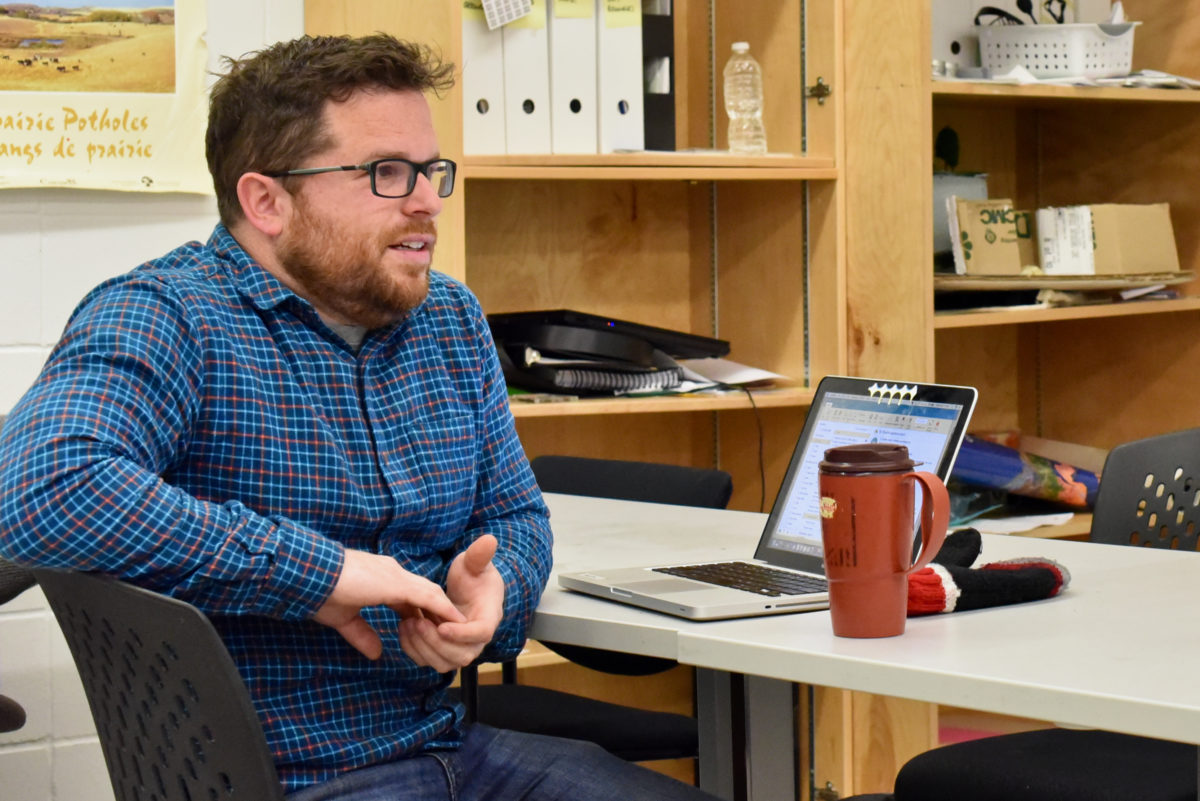 Neither the Calgary Board of Education nor the Alberta Teachers Association has prepared any additional resources to help teachers when it comes to climate change education, so the Alberta Council for Environmental Education has stepped up to try and fill that void.

The council offers suggestions for peer-reviewed research to read, potential field trips and resources that can be used in classrooms like YouTube videos, podcasts and books.

Thomson explains there are a number of reasons for why the energy and environmental innovations class is the exception to the rule, and it’s a lot more complicated than what is or isn’t in the curriculum.

“If you do a scan of all of the Word documents of all of the programs of study in all of the Alberta curriculum, yeah the word ‘climate’ pops up here and there, a couple of times,” he said.

But he suggests a bigger problem is that most teachers have no background in the topic, so being able to confidently teach about climate change in a polarized, petroleum-producing province is challenging. Thomson advocates focusing on or incorporating solutions to climate change issues into their lessons.

Thomson also says he’d like to see school boards across the province step up and make this a priority, not only in science and social science, but by incorporating an appreciation of sustainability and the environment into all subjects.

“Teachers are very good at finding opportunities to help deliver the education that they know their students are hungry for, in a way that they think will work best with her the student group,” Thomson said.

Coming back to the students and what this all means for them, Williams — the student who told The Narwhal her teacher told her class that climate change “sucks” — says the lack of education on climate change is evident when she talks to her peers that aren’t in her environmental innovations class.

She says many of her peers are already convinced climate change is overblown and exaggerated, which puts her in an awkward spot because she shies away from confrontation, but still feels compelled to educate them herself.

Abby Storrow, 16, says she didn’t know anything about climate change when she walked into this class for the first time. She says what she’s learned will change how she plots her future after graduation.

“Lots of my peers don’t know about it at all,” she added. “And when I’m talking about it they almost think of it as a joke because they’ve never learned about it and it’s not the curriculum so [they figure] it shouldn’t matter.” 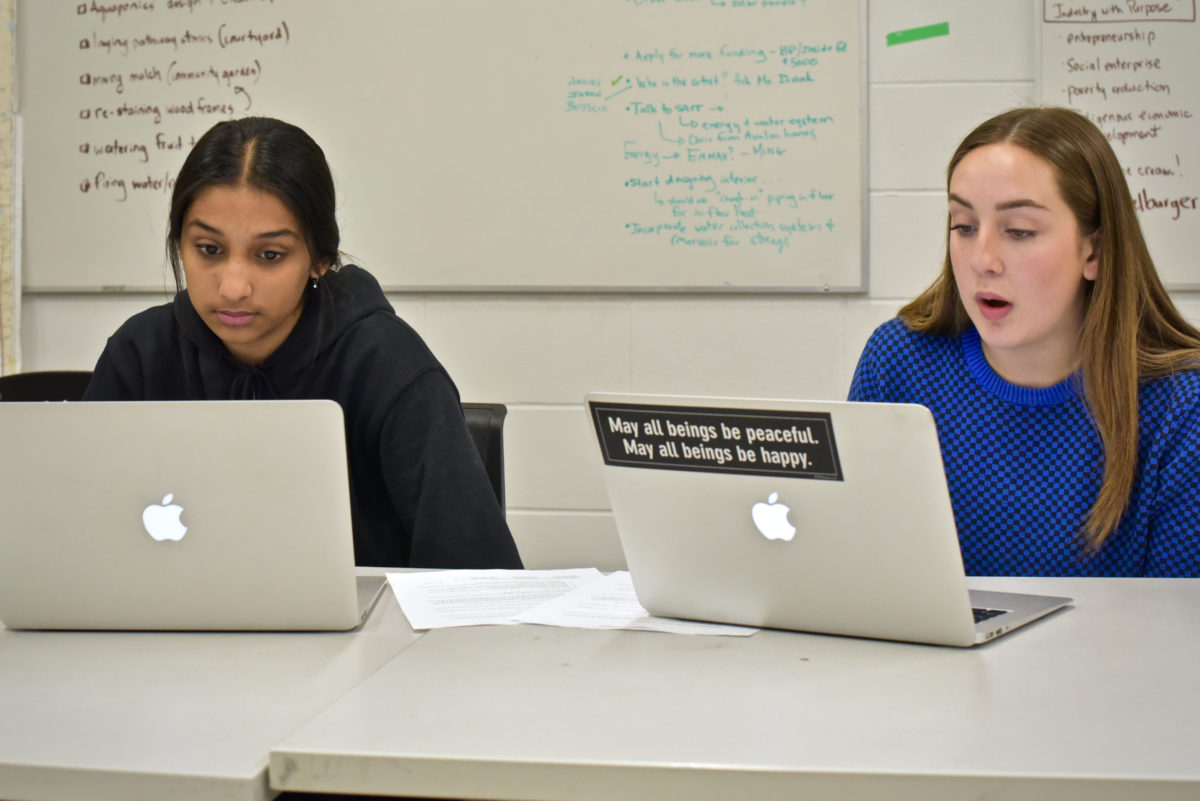 ‘Our education system is preparing us more so for the past’

Darling, as she heads for the convocation stage, is completing the second iteration of the environmental innovations course and for her final project she is determined to find out why there aren’t more classes like this one being offered in Alberta. Darling has set out to interview teachers and members of the administration and so far the answers she’s come back with aren’t encouraging.

“No one has been able to give me a clear answer,” she told The Narwhal. “From the research I’ve done, the best answer I can give is there’s not enough funding available for it.”

Neha Patter, a 16-year-old who hopes to become a doctor, feels that generally her education isn’t properly preparing her or her peers to make a difference in the future.

“I feel like our education system is preparing us more so for the past than the future.”

Sarah is a climate change reporter with the Winnipeg Free Press, formerly a freelance journalist based in Calgary. She reports…