The spectre of a massive, floating LNG plant in environmentally fragile Saanich Inlet may seem unlikely to gain environmental approval, but the proposal must be defeated before liquefied natural gas prices increase to the point that the project becomes too tempting, worried southern Vancouver Island residents are being warned.

“It is best not to let your guard down and say the economy is not good right now,” said Eoin Finn, founder of My Sea to Sky and a retired partner in KPMG, who holds a PhD in physical chemistry.

Proposals by Steelhead LNG Corp. for a floating plant anchored adjacent to Malahat First Nation land at Bamberton, fed by gas pipelines criss-crossing the Salish Sea and then snaking across Vancouver Island to Sarita Bay near Bamfield, where the company wants to build a larger LNG plant on Huu-ay-aht First Nation land, were initially greeted with incredulity.

There are currently 20 proposed LNG projects in B.C. although none have received final investment decisions. Three projects, including LNG Canada in Kitimat, Pacific Northwest LNG near Prince Rupert and Woodfibre LNG near Squamish, have advanced beyond the proposal stage but a combination of low prices, First Nations opposition and federal permitting have prevented the industry from gaining a major foothold in the province.

“The NEB seems to hand out export permits like confetti at a wedding,” Finn told capacity crowds at meetings in Esquimalt and Mill Bay.

It is not only the Steelhead plant itself — which would be the first floating LNG terminal in the world — that should worry southern Vancouver Island residents, they should also consider the massive ships, about the length of three football fields, that would pick up LNG, Finn said.

The ships suck in vast amounts of seawater to cool the frozen gas, which means phytoplankton and small fish are also sucked in, making “the biggest bouillabaisse engine of all time,” Finn said.

“Then they blow it out again and, because they don’t want anything fouling the pipes of their very expensive ship they add a little biocide into it,” he said.

“That means 50,000 tonnes of hypochlorited hot water poured into the Inlet every year, making it into a marine desert.”

Or, think about the greenhouse gas emissions, Finn suggested.

Saanich Inlet, a glacially-carved fjord with deep water that is oxygen-depleted for much of the year, has been studied by scientists for 80 years because of the rare ecosystem that produces phytoplankton blooms. It is home to shellfish, herring, salmon and many other species and currently houses the Ocean Networks Canada VENUS (Victoria Experimental Network Under the Sea) cabled undersea laboratory. 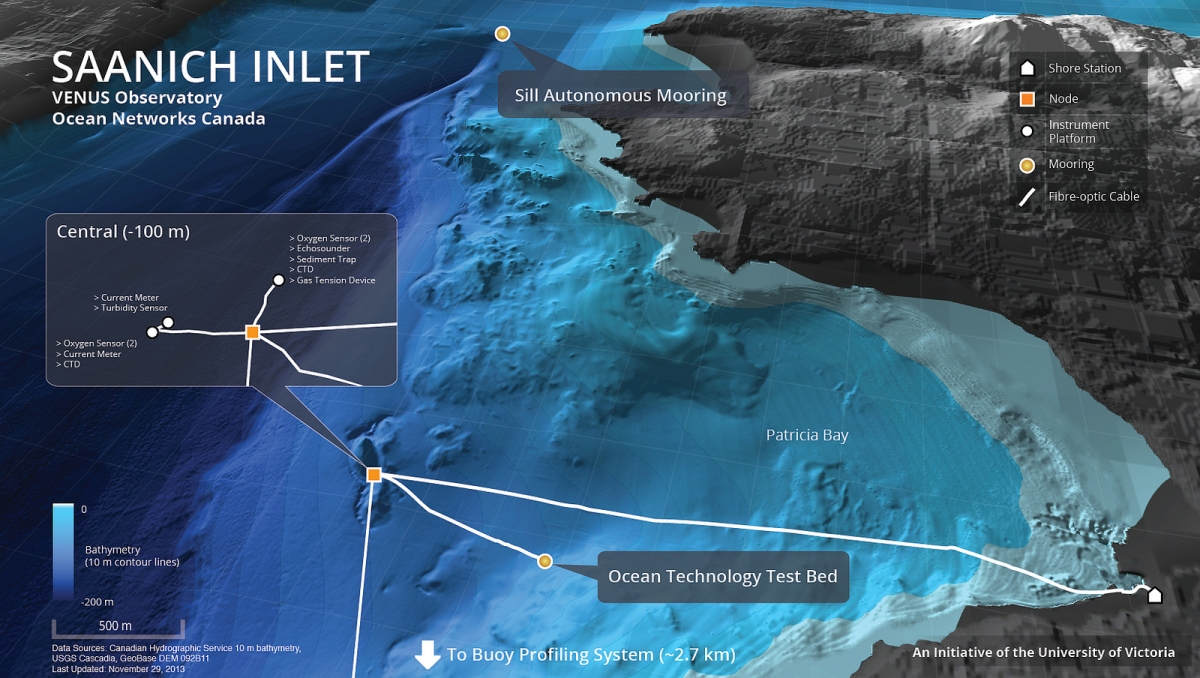 It is flanked on one side by the winding Malahat highway, dotted with numerous small communities, and on the other side by Saanich Peninsula, with villages such as Brentwood Bay, tourist attractions such as Butchart Gardens and Victoria International Airport. At the tip of Saanich Peninsula is the busy Swartz Bay Ferry Terminal.

Steelhead CEO Nigel Kuzemko said one of his priorities is ensuring that there will be no detrimental effects on Saanich Inlet, so the company has commissioned a study that will model the effect of one LNG ship a week picking up gas from the floating plant.

Using seawater for cooling the giant LNG thermos tanks is more efficient than air and will produce less greenhouse gas emissions, he said.

“But the water comes out warmer which is what we are concerned about and we want to know what the effect will be on Saanich Inlet,” Kuzemko said.

A chemical will be used to stop bacteria growing in the pipes, he said.

“We are looking at different ones, but they will all be biodegradable so they don’t have any long-term impact,” he said.

Saanich Inlet is a unique area, but has had its share of industrial activity over the last 100 years, Kuzemko said, pointing out that the area where the plant would be situated is beside the old Bamberton concrete plant, where the bottom of the Inlet is covered in concrete dust.

Information compiled in the study would be needed for the environmental assessment process, but Steelhead wanted to get out in front and ensure all the questions were answered and that the community had been consulted from the start, Kuzemko said.

“We hope to do it the right way, but, some people think any energy project is wrong,” he said.

“What we are trying to do is something that we think is great for the world. There’s no reason industry and Saanich Inlet can’t co-exist.”

The aim of reducing the environmental footprint is the reason Steelhead has chosen to use existing pipeline routes, meaning the route wends from B.C., across the Strait of Georgia to Washington and then back to Saanich Inlet, rather than cutting across an untouched landscape over the Coast Range mountains, Kuzemko said.

Adam Olsen, B.C. Green Party deputy leader, who lives 100 metres from Saanich Inlet and grew up on Saanich Peninsula, fears that the belief such a proposal will automatically be rejected is resulting in apathy, which could allow Steelhead to slip through the approval process.

Even though the project is unlikely to be viable at the current price of LNG, many options open up once the company is given a certificate, he said.

It could be sold or put on stand-by for the future, so the focus has to be stopping it at this stage, said Olsen, who believes the provincial government is likely to be in favour.

“This government has basically bet everything they have on LNG and they are also the regulator,” he said.

“I don’t think we can have any confidence that, just because the project appears to be outrageous, that this government won’t look at it seriously.”

Olsen is a member of Saanich Inlet Network, a group formed to fight the LNG proposal, which, during the last week, has collected almost 500 signatures on a petition asking provincial Environment Minister Mary Polak and federal Minister of Natural Resources Jim Carr to reject the Malahat proposal.

Investigative energy reporter and author Andrew Nikiforuk, who has written extensively on LNG, worries that, if Steelhead builds the plants, there will be a push to extract methane from the many coal seams around Vancouver Island.

“A company which has spent billions on LNG terminals will want to keep those facilities full and there’s a lot of methane in old coal seams on the Island,” he said.

“It could mean fracking in watersheds full of salmon.”

However, Finn believes that using methane from coal seams would not be tolerated even if the company is given approval for the plants.

“The coal seams are very close to the surface and any government that gave a company the right to frack so close to people’s drinking water would be hung, drawn and probably quartered,” he said.

It is not yet known whether the 300-member Malahat First Nation will continue to support the project following the election of a new chief and dismissal of three top economic development officials as part of a review initiated by new Chief Caroline Harry.

The agreement-in-principle was signed while former chief Michael Harry was in power and has raised the ire of some of the other four First Nations with land surrounding Saanich Inlet, who say they were not consulted.

Caroline Harry, who could not be reached before publication, said shortly after her election in November that she would reach out to Tsartlip, Tseycum, Pauquachin and Tsawout. Without Malahat support it is doubtful whether the project could proceed.

Steelhead has been talking to Malahat First Nation for 18 months, said Kuzemko, who does not believe there is any reason to think the relationship has changed with the election of a new chief and council.

“It’s going great actually. There are different concerns and a different environment with a new chief and council, but we will work with them,” he said.

Steelhead’s timeline calls for a final investment decision to be made in 2018 and, as with other companies looking at investing in LNG export plants in B.C., economics are likely to be a major factor.

Currently the LNG Asian spot price per million British thermal units is $5.72 and studies indicate that LNG prices are likely to remain low into the 2020s.

That means building LNG plants in B.C. makes no sense as the cost of fracking, transportation, capital costs, liquefying the gas and then shipping it to Asia would be about $12 per million British thermal units, Finn concluded after crunching the numbers.

However, Natural Gas Development Minister Rich Coleman said studies being used by the B.C government show that there will be a worldwide shortage of LNG within four or five years and, as it takes about four years to build an LNG plant, B.C. is well-positioned for developing a thriving LNG industry.

“If the demand is larger than the supply, the price will start to creep back to an economic level,” he said.

Kuzemko knows there are many hurdles before the project can start.

“B.C. is the most arduous location in the world to get approval,” he said.

“We know this project has to be community-based from the start. We are trying to do things in a different way.”