Hundreds, perhaps thousands of people from across Canada and the US will walk into the heart of tar sands country to be part of a spiritual gathering called the Tar Sands Healing Walk on July 5th-6th.

They will come face-to-face with the environmental destruction caused by the tar sands industry. Open pit mines, tailings ponds, industrial facilities and more dominate the landscape of the walk near Fort McMurray, Alberta.

The fourteen-kilometre Healing Walk is neither a rally or a protest. Organizers describe the event as a spiritual gathering focused on healing the land, air, water and all living things harmed by the relentless expansion of the tar sands industry.

“Protests, rallies, marches are all good and necessary, but we felt like people needed something more spiritual. Something to create or strengthen a connection to the land,” says Jesse Cardinal, co-organizer of the Healing Walk.

As the international movement to stop the tar sands has grown, the Healing Walk has also grown since its birth four years ago. In its inaugural year the Healing Walk was a one-day event with one hundred participants. Hundreds and very possibly thousands will come to this year's two-day event that includes workshops, ceremonies, internationally-renowned guest speakers and the walk.

Organizers anticipate the 4th Tar Sands Healing Walk to be the largest event yet.

“First-time participants of the Healing Walk need to prepare themselves for an emotional journey,” Cardinal told DeSmog Canada.

Invitations have been extended to Alberta premier Allison Redford and federal Natural Resources Minister Joe Oliver to attend. Thus far neither have accepted the invitation.

“We want people to have an understanding of the scale and size of the tar sands industry, but we also want people to leave with a sense of hope for renewal,” says Cardinal.

The Healing Walk will begin with a pipe ceremony at Crane Lake, north of Fort McMurray. First Nations elders and ceremony people will lead participants on the 14-kilometre journey through existing tar sands operations, and tailings ponds. The Athabasca River is less than ten kilometres from these industrial sites that spew toxins into its waters. Prayers for the land will be made along the way. 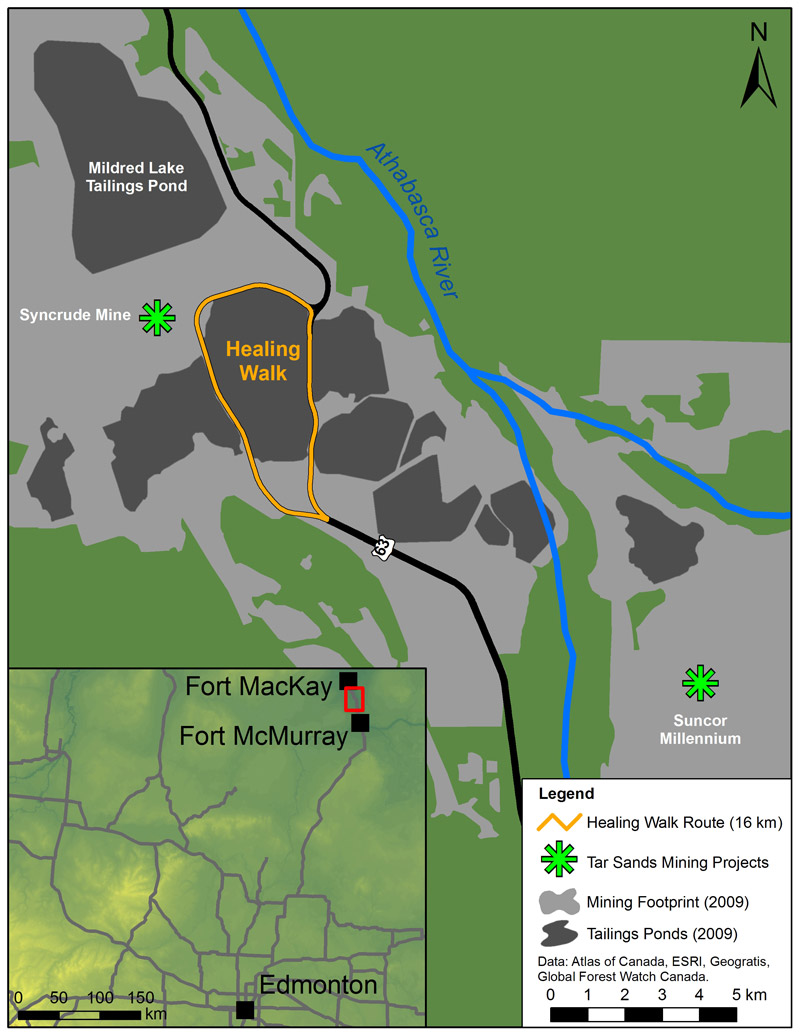 First Nations tar sands campaigner Clayton Thomas Muller in a recent article recalled being struck by scenes of vast deserts of wet and dry tailings ponds and industrial facilities that could have been straight out of a science fiction novel on his first Healing Walk.

A campsite is available for participants planning on staying over night and some catering will be provided by the organizers. Meet and greets as well as workshops on pipelines, First Nations cultures and tar sands impacts will take place the day before the Healing Walk. A feast and closing ceremony will conclude the event.

The Significance of the Fourth Healing Walk

Four is a significant number in many indigenous cultures. There are four seasons. Four directions. Four parts to life (mental, spiritual, emotional and physical).

“The fourth Healing Walk is significant because it indicates the ending of one cycle and the beginning of another,” explains Cardinal, who is Metis and a member of the Kikino Metis Settlement in northeastern Alberta.

Coincidentally, four organized cross-country treks will arrive in Fort McMurray to participate in the Healing Walk. Two groups are travelling from the US. A third group is coming from British Columbia.

The fourth and longest trek will be made by Dion Tootoosis who left traditional Mi'kmaq lands in Nova Scotia on June 12th and will bicycle over 5000 kilometres to reach Fort McMurray in time for the Healing Walk.

Tootoosis, from the Poundmaker Cree Nation of Saskatchewan, says he wants his journey to inspire conversations about natural resource extraction in Canada, particularly the tar sands, and stimulate discussions about solutions.

“I believe that the answer to the Alberta tar sands, and other locations across Canada where natural resources are being exploited, lies within the people of this country. Only a people know what is best for their community,” says Tootoosis in a statement.

As the project’s budget continues to grow, so too do questions about whether the dam...