In the North, where food prices are notoriously high, beluga whales are a staple community resource

John Noksana, Jr., learned the many skills of harvesting beluga whales in his teens. He’s spent the intervening decades perfecting them.

“I can proudly say I can go capture a whale, butcher a whale — do everything from start to finish,” he says. Rendering the fat into oil, he says, is the most time-consuming. In bad weather it can take two weeks or more.

It’s part of a set of practices passed down by Inuvialuit for millennia, just one of the many skills needed to thrive on the Arctic coast.

The whale hunt is also a central social event.

“The first few whales anyway — probably the first three, four, five whales — everybody knows,” he says. Once word gets out on Facebook, the whole community of 900 people will take a trip down to the dock to help themselves to a share of the catch.

In a place where food prices are famously obscene, beluga meat provides a sustainable source of nutrition to the community.

But lately, questions have been raised about the health of the belugas, from the presence of persistent organic pollutants (POPs) to mercury.

A paper published this week in the journal Marine Pollution Bulletin found yet another cause for concern: tiny fibres and fragments of plastics inside the stomachs and intestines of the Arctic whales.

“We found microplastics in every individual that we sampled,” says Rhiannon Moore, the paper’s primary author. 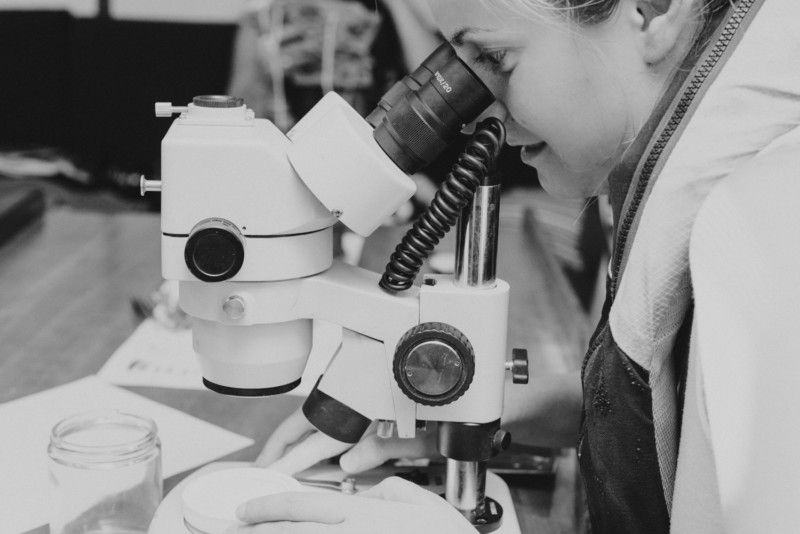 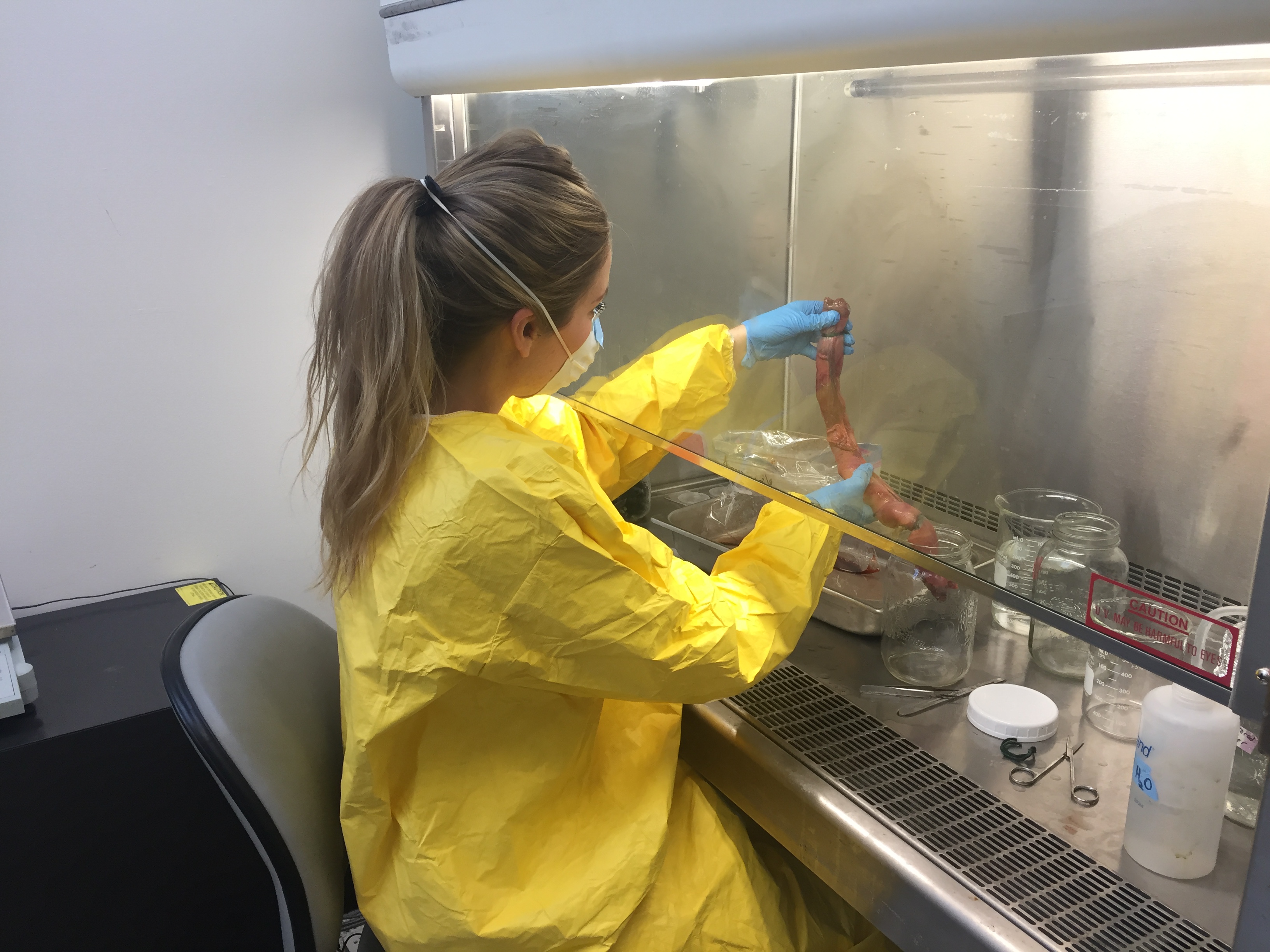 Rhiannon Moore extracts the contents of a beluga intestine, in order to test it for microplastics. Photo: Rhiannon Moore

In partnership with hunters like Noksana from the community of Tuktoyaktuk, and the Department of Fisheries and Oceans, the scientist from the Ocean Wise Conservation Association dug into seven whale stomachs and intestines. Three hundred and fifty bits of plastic in all were found inside the whales, most of which were less than two millimetres in size (about the thickness of a loonie). That small size suggests that the plastics may have come from prey eaten by the whales, or at least that they have travelled a long way.

Unlike most studies of this type, in which samples come from whales that have washed up or been stranded, the whales were healthy adults who were harvested for food.

“That means that it’s not necessarily biased toward animals that are sick or injured, or washing up because they’ve ingested plastic,” Moore says.

There is no direct evidence so far that suggests this plastic is bad for the whales’ health — let alone the health of the hunters and community members who eat them. But “it might just be one on top of like 16 other changes this whale is experiencing,” explains Lisa Loseto, an author of the paper and scientist with Fisheries and Oceans Canada who has been working with the Inuvialuit to study the whales for decades.

Loseto’s earlier work has focused on other toxic chemicals in the whales, but a direct transfer of chemicals through the whales and into humans may not be the only way the plastics can harm the people who rely on them.

“The wellbeing of our animals is everything,” Noksana says. 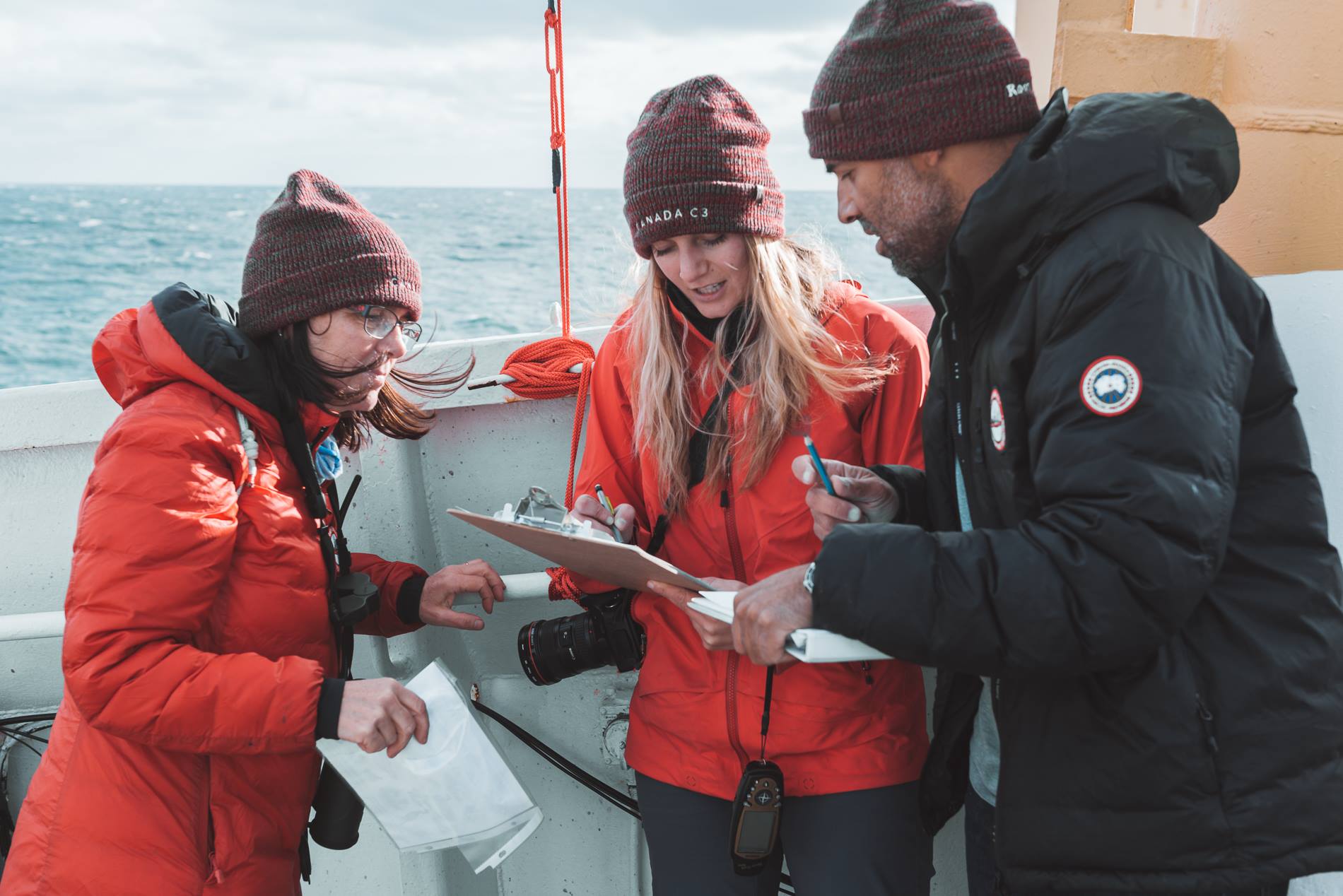 All across the Arctic, a single stunning result has been repeated again and again: there is plastic everywhere. It’s in birds. It’s in shellfish. It’s in sea ice. Thousands of kilometres from the nearest city, there it is.

Yet all the efforts to study the spread of plastic throughout the Arctic are happening in isolation.

“There’s no plan, there’s no coordination, there’s no monitoring framework,” explains Jennifer Provencher, a scientist with Environment and Climate Change Canada. Provencher has been named to an Arctic Council panel creating a monitoring program to bring this research together and generate Arctic-wide data.

Provencher’s own studies of seabirds involve the communities of the central Arctic. That work has shown that, like the belugas of the western Arctic, the vast majority of northern fulmars have plastic in their bodies.

“There is no population of fulmars anywhere that we’ve looked at that has zero plastics,” she says.

Like the work Loseto and Moore have done in the western Arctic, Provencher’s work has depended on the communities nearby.

On that point, Noksana is particularly proud. About as long as he has been hunting whales, the community of Tuktoyaktuk has been working with researchers to understand them better — both through their own lens and that of the scientists.

“The guy in the community has a PhD on the land,” he says.

And it’s their own questions that guide the research.

“80 per cent of the studies that are done in our region, they come from the people,” he says. Years ago, overhunting and waste led to a strict self-imposed bylaw that forced hunters to harpoon whales before shooting them, preventing lost catches. Losses are now near zero, he says.

The need to monitor the environment has taken on a darker timbre in recent years, however, as climate change has accelerated and begun manifesting in destructive ways for the coastal community.

Now he frets about establishing baselines before it’s too late.

Not that the belugas are yet lost. Far from it, in fact; the local population number was healthy at last count and a new count is on its way. The plastics may be alarming but the community is determined to seek further answers.