Mining Company Gets Federal Approval to Use B.C. Fish-Bearing Streams to Dump Tailings

Two fish-bearing creeks will be used for 2.3 billion tonnes of toxic tailings from the proposed Kerr-Sulphurets-Mitchell (KSM) mine in northwest B.C., wiping out habitat for several populations of small Dolly Varden fish.

Seabridge Gold Inc. has been given federal government approval to use upper tributaries of the North Treaty and South Teigen Creeks, which flow into the Nass and Bell-Irving rivers, for tailings from the planned gold, copper and molybdenum mine 65 kilometres northwest of Stewart and 30 kilometres from the Alaska border.

Once in operation, KSM is set to become the largest open pit mine in North America. Construction is set to begin in 2017.

While the company has pledged to compensate for the loss with development of additional fish habitat in nearby streams and will relocate about 30,000 fish from the affected creeks, Alaskans say they were not consulted, despite a recently-signed Memorandum of Understanding between B.C. and Alaska.

There are also growing concerns on the Alaskan side of the border that Canada is making a habit of allowing fish-bearing streams to be used for tailings.

“This just underscores our frustration about really being shut out of the process,” said Heather Hardcastle of Juneau-based Salmon Beyond Borders, pointing out that fish do not abide by national boundaries.

Seabridge plans to build 23-kilometre tunnels to take the mining waste to the approved watersheds on the Canadian side of the border but the closest watershed is the Unuk River, one of Alaska’s premier salmon rivers. 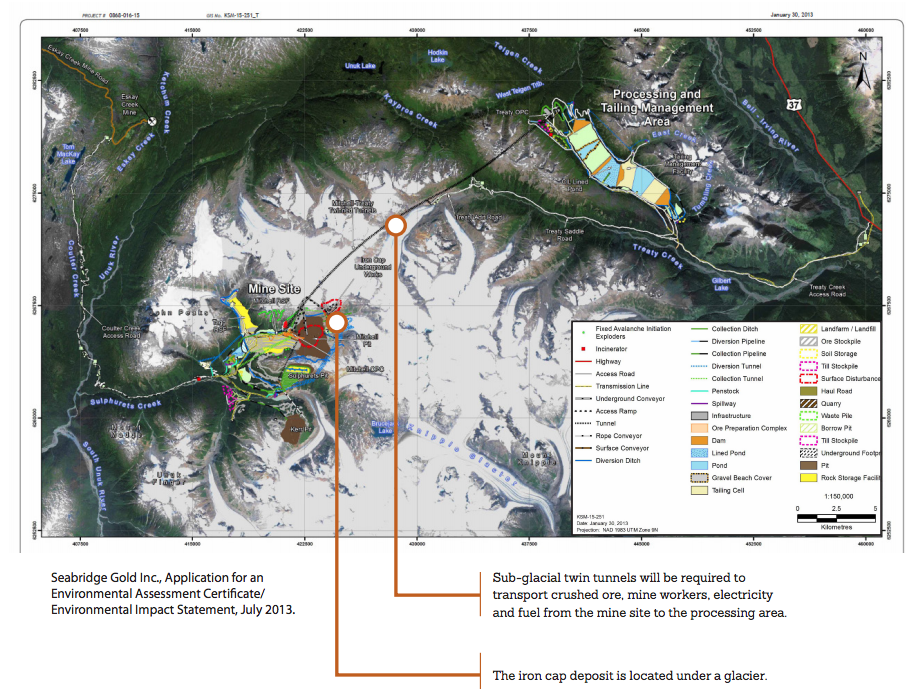 Rendering of the KSM mine showing the tailings management area. Image: Rivers Without Borders

Chris Zimmer of Rivers Without Borders emphasized that what happens to salmon and steelhead trout in the Bell-Irving and Nass rivers affects Alaska fishermen.

“Tailings are the most toxic of materials and they would be draining into world-class salmon and steelhead rivers,” he said.

Hardcastle and Zimmer question why the Canadian government is handing out amendments to the Metal Mining Effluent Regulations (MMER) to allow fish habitat to be used for tailings.

“These MMER amendments have become almost a de facto process. The extraordinary has become the normal way of doing business,” Zimmer said.

“It seems like this is becoming the standard in Canada and B.C., to authorise the filling-in of fish-bearing water bodies with toxic tailings in perpetuity. We saw the same authority granted at Red Chris last year.”

Red Chris, another B.C. mine close to the Alaska border, is owned by Imperial Metals, the same company that owns the Mount Polley mine, where the tailings dam collapsed in 2014 sending 25 million cubic metres of sludge and tailings flooding into the Quesnel watershed.

After the Mount Polley disaster an expert engineering panel recommended that B.C. move to dry stack tailings, a system of pressing about 85 per cent of the moisture from tailings and then stacking them in a pile.

However, companies say it is too expensive to move to dry stacking and the KSM mine will have a 239-metre earthen dam — one of the highest tailings pond dams in the world — holding back two billion tonnes of tailings.

“Just the fact that they are able to build these massive tailings facilities is really maddening,” Hardcastle said.

Toxic tailings must be treated forever and that is a long time, Zimmer said.

“It’s not as if acid mine drainage stops in 200 years. It’s not as if it becomes magically non-toxic and what bank account is then going to exist to deal with the problems? It’s almost like having radioactive waste dumps,” he said.

Environment and Climate Change Canada media spokesman Mark Johnson said in an emailed response to questions from DeSmog Canada that depositing of “deleterious substances in waters frequented by fish” requires the proponent to come up with a fish habitat compensation plan.

“Seabridge has developed a fish salvage strategy to ensure that the fish are relocated to suitable water bodies within the Teigen and Treaty creeks watersheds as well as other mitigation measures to monitor the plan,” Johnson wrote.

Mine owners must test the run-off as it is required “that mine effluent not be acutely lethal to fish,” he said.

Since the regulations came into force in 2002, permission has been given for 27 bodies of fish-bearing water, associated with 12 mines, to be used to store tailings, Johnson said.

“The KSM project will be the 13th mine to have an authorized tailings impoundment area in a fish-frequented water body,” he said.

Seabridge looked at 14 alternatives for managing the tailings of which four were potentially feasible, and the creek plan was assessed as the best, Johnson wrote.

Brent Murphy, Seabridge vice-president of environmental affairs, said there will be no significant downstream effects from using the creeks for tailings.

“And there will absolutely not be any effect on the Nass,” he said.

In addition to the assessment by the federal government there has been a public comment period and extensive consultation with indigenous groups and the Department of Fisheries and Oceans, Murphy said.

“It’s a very rigorous, step-by-step process. These things are not decided willy-nilly,” he said.

However, others, such as Fred Olsen Jr. of the United Tribal Transboundary Working Group, believe that poisoning lakes and rivers for the sake of the mining industry shows remarkable cynicism.

“This is not the world I was promised,” he said.

Image: Location of the KSM mine. Photo: Mike Kay | Rivers Without Borders

Alberta and the federal government knew Biden's cancellation was coming and could have planned for...