The effects of climate change can be complex and unpredictable. For one species of Arctic duck, the result is a tense standoff between population growth and decline.

Eiders are a species best known for their light, fluffy down. Each spring the birds return to their coastal tundra colonies and build nests on the ground, protected only by a low profile.

A new study has shown the warming Arctic and earlier spring melt is in one way a boon to the birds: it gives them access to their underwater feeding grounds sooner. That means more females can fatten up, and possibly lay more eggs as well.

Once ashore, a few bears can devastate an entire colony, eating all of its eggs in a matter of days.

The product has the eider population sitting on a knife’s edge.

“Those two effects — the more females breeding and larger clutch size — actually almost perfectly cancel out in our models the effect of polar bears eating more of their eggs,” explained Cody Dey, a researcher at the University of Windsor.

This effect has shown up since the early 1990s, when researchers on the Nunavut island surveyed by Dey and his colleagues rarely spotted bears ashore.

“Now we’re seeing pretty much 90 per cent of nests have been depredated by polar bears,” said Dey.

“This is probably the largest eider colony in the world and it’s having pretty much no reproductive output at all.”

Studies of how well this strategy works for the polar bears have suggested it isn’t a viable way for the large carnivores, which depend on fatty seals for nutrition, to make up the difference and survive long-term.

The effect on the nests, meanwhile, is devastating. In one field season, researchers watched as every nest but one was raided by polar bears; the sole remaining nest was inside the field camp’s electric fence.

The scientists’ models showed that the balance should remain in place for the first half of the century, but Dey admits that unexpected factors — for example, faster spread of diseases — could “throw the models out the window.”

Eiders are not the only species held in the balance as climate change alters the world around them. A 2014 paper published in the journal Climate Change Responses showed that in studies of insect-plant relationships, a third showed a relationship like that between the eiders and polar bears: climate change was helping one while also helping another that hindered it. 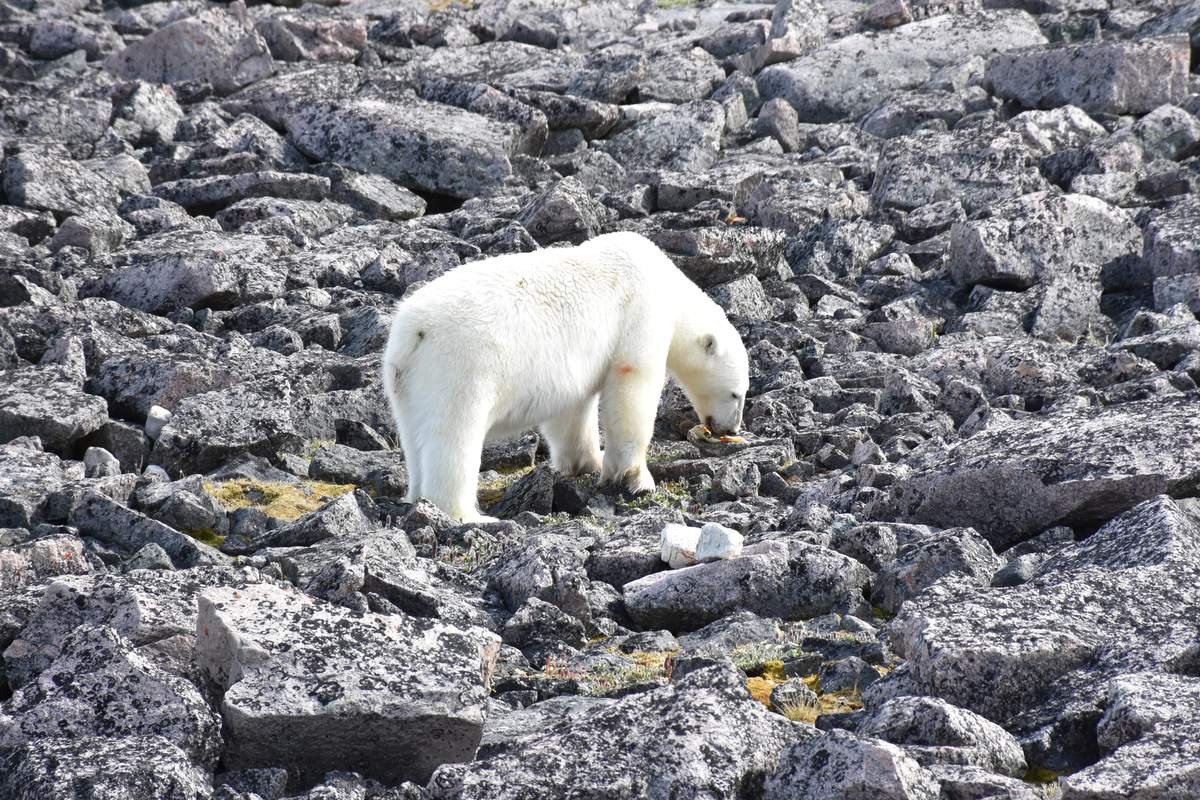 In some parts of the Arctic, polar bears have been increasingly relying on bird eggs for nutrition. Studies have shown that that may not be enough to make up for a loss up seal blubber in their diets. Photo via Evan Richardson.

The duck study began when multiple communities in Hudson Strait in eastern Nunavut told researchers they had started to notice polar bears increasingly coming into bird colonies in the area.

Dey’s supervisor Grant Gilchrist had built strong connections within the communities, and those relationships guided the research.

The scientists have also kept the communities involved in the research process, employing guides, boat drivers and research assistants in fieldwork. When the study is finished, Dey says the results will be shared with community members as well.

“That’s really where the power from research comes from, is knowing the results,” he said.

Dey and his colleagues in the Liber Eros fellowship recently wrote an op-ed in the magazine Policy Options calling on the federal government to formally include Indigenous traditional knowledge and partnerships with northern communities in its upcoming Arctic Policy Framework.

“This is the approach to Arctic research that we need to support: research shaped by northerners that addresses the needs of northern communities,” the authors wrote.

The op-ed also called on the federal government to build more infrastructure in the North, such as enhancing internet connectivity in a place where just 27 per cent of households have access.

“Combined with few roads and the high cost of air travel, these communication barriers limit the exchange of information and exclude ideas that could improve policy and practice,” they wrote.

As the eider study and its surprising result shows, that exchange of ideas can bear unexpected fruit, for both researchers and communities.