By Sharon J. Riley
Share
Alberta reporter Sharon J. Riley has been nominated for an award for her investigation into oversight of oil and gas drilling. Photo: Chris Pawluk / Flickr

Information obtained by The Narwhal reveals that oil and gas companies owe the Alberta government more than $20 million in unpaid land rents accumulated since 2010 — and annual payments by government on behalf of delinquent companies have increased 840 per cent between 2010 and 2017.

When oil and gas companies drill wells on private property, they enter into a contract with landowners to pay an annual fee — rent for the land.

However, when companies don’t pay, landowners can apply to a government tribunal — called the Surface Rights Board — that steps in and pays the rent using taxpayer money. The government is supposed to recoup that money from the companies, so taxpayers aren’t footing the bill.

“The vast majority of operators [whose rents are being paid by taxpayers] are in bankruptcy proceedings, receivership or insolvent,” Mike Hartfield, spokesperson for the Surface Rights Board, told The Narwhal.

The Narwhal reported in January that Alberta recouped less than two per cent of all money paid on behalf of delinquent oil and gas companies in 2017 .

The new data obtained through a freedom of information request spans eight years and shows that not only is this practice the norm, but the problem is getting steadily worse.

A bombshell of a piece from @sharonjriley. “If people are worried about 3,000 [current orphan wells] then they won’t know what hit them with 80,000 coming.” https://t.co/btj8RU1Sca #ableg #abpoli #cdnpoli #oilandgas

Rent recovery applications up 580 per cent

The government documents reveal that of the money paid on behalf of delinquent oil and gas companies, less than two per cent has been recouped during the past decade.

The number of applications from landowners for what’s known as rent recovery has increased 580 per cent since 2010.

In total, oil and gas companies currently owe the Alberta government more than $20 million in unpaid land rents accumulated since 2010. 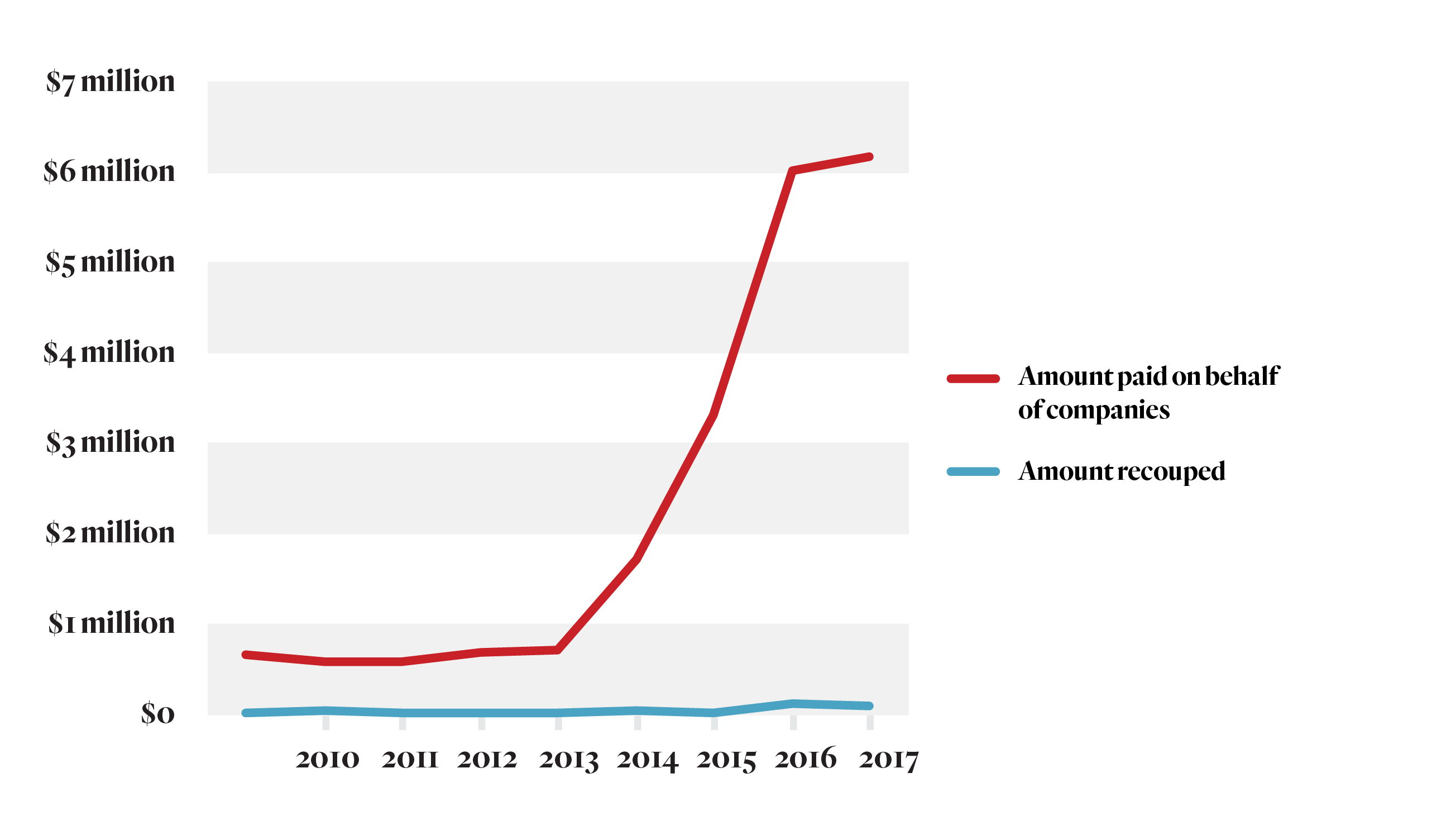 The amount the Alberta government has paid in land rents on behalf of delinquent oil and gas companies has been steadily on the rise in recent years, with more than $20 million paid since 2010. Less than two per cent of that money has been recouped from companies.

The wells in question are not orphans. These are wells owned by companies that are still in operation — but are just (way) behind on their bills. In these case, landowners apply to Alberta’s Surface Rights Board to be compensated for the rent they’re owed by delinquent companies.

Orphan wells are different. They’re wells left behind when a company formally declares bankruptcy, and are taken over by the Orphan Well Association.

Lars De Pauw, executive director of the Orphan Well Association, talked to The Narwhal about the influx of new orphan wells added to the association’s inventory.

“We are well funded,” he said in an interview in November, noting that the association is primarily funded by industry. “Industry to date has contributed over $314 million.”

“This is a substantial amount that companies have paid for other company’s missteps.”

Companies pay into the orphan fund based on a formula set by the Alberta Energy Regulator that’s based on their share of the estimated total cost of clean up in the province.

But it isn’t technically just industry funding the Orphan Well Association. The Alberta government has given the association at least $30 million in grants since 2009, and announced that it planned to loan the organization $235 million in 2017. Last year, the federal government also said it would allocate $30 million to the cause.

The association’s inventory currently includes more than 3,000 wells that need to be properly sealed and another 1,500 that are sealed but still need more reclamation work. The inventory doubled between 2015 and 2018, according to its annual report.

Many of the wells the Alberta government has been picking up the tab for aren’t orphans yet, but given that companies are defaulting on payments, they soon could be.

‘They won’t know what hit them’

Many of the wells the Alberta government is picking up the tab for are inactive — no longer producing any oil or gas.

“You hear newspaper articles with the alarm that we have 3,000 orphan wells and how this is such a big number,” Lucija Muehlenbachs, an associate professor of economics at the University of Calgary, told The Narwhal. “And of course it’s scary that it’s growing at a fast rate.”

“But in comparison to the number of inactive wells, this is, like, peanuts,” she said.

In a 2017 paper, Muehlenbachs reported there were 80,000 inactive wells in the province — wells that her research found were very unlikely to ever produce again, even if prices increased.

In its most recent annual report, the Orphan Well Association reported “the increase in orphan properties is expected to continue,” noting that dozens of companies in Alberta were insolvent at the time.

“If people are worried about 3,000 [current orphan wells],” Muehlenbachs added, “Then they won’t know what hit them with 80,000 coming,” noting that not all inactive wells will necessarily become orphans.

“If people are worried about 3,000 [current orphan wells] then they won’t know what hit them with 80,000 coming.” — Lucija Muehlenbachs, economics professor

If companies are struggling to pay the rent owed to landowners, there are valid questions about whether they can stay afloat — and pay for their environmental liabilities — in the long run.

And if they can’t, they’ll end up on the ever-growing list of the Orphan Well Association. In the meantime, the Alberta taxpayer foots their land rent bills.

“It speaks to how much liability is being accumulated in Alberta,” Muehlenbachs said.

More costs could ‘fall to the public or to the landowners’

Questions remain about whether the Orphan Well Association can handle any more increases in its inventory.

“We do know there is a potential for the fund to be depleted or underfunded and those costs… [could fall] to the public or to the landowners,” Lewis Manning, a lawyer for the Canadian Association of Petroleum Producers told the Supreme Court of Canada last year.

(De Pauw of the Orphan Well Association told The Narwhal he was optimistic the association is finding new ways to minimize costs and increase efficiencies, a sentiment the organization echoed in a recent press release).

Manning was in court as part of the Redwater case — which recently resulted in the decision that paying reclamation costs takes priority over repaying creditors.

The ruling applies only to companies that have declared bankruptcy — and only helps if the company has any assets left over.

The government data The Narwhal obtained shows that Alberta’s environmental liability problem is not limited to already bankrupt companies. Many more companies are apparently already in such a precarious financial situation that they aren’t paying even the most basic of expenses — including the compensation owed to landowners.

As Muehlenbachs noted, many people assume that the Orphan Well Association is paying the expenses of wells when companies can’t or won’t.

But, she added, “this is a clear case where Albertans at large are paying.”

Banner: Alberta reporter Sharon J. Riley has been nominated for an award for her investigation into oversight of oil and gas drilling. Photo: Chris Pawluk / Flickr