Postmedia Gets Away With Running Unmarked Oil Advertorials

Paid advertisements for the oil industry have run unlabelled as editorial content on the websites of the Vancouver Sun and Regina Leader-Post — yet Canada’s ad regulator has decided not to rule against Postmedia, the company that owns the papers.

DeSmog Canada filed a complaint with Advertising Standards Canada on March 4, regarding a story published on the Vancouver Sun’s website on Dec. 4, 2013, with the headline “Born to the Challenge: Janet Holder’s B.C. roots make her the perfect lead on Northern Gateway.”

The article told the tale of how Holder came to be Enbridge’s VP of Western Access, responsible for pushing the Northern Gateway oil tanker and pipeline project. Holder recited the economic claim that Canada is losing $50-million a day due to limited export markets

Economist Robyn Allan read the article and took issue with that economic claim. When she submitted an opinion piece in response, she was informed it couldn’t be run because the article she was responding to was actually a paid advertisement.

“It was clear that the page was set up to look like arms length reporting — even more so on the web than in the printed version of the paper,” Allan told DeSmog Canada. “I had prepared my opinion piece from the web ‘article’ and when I saw the printed version, I became confused—was it reporting or paid-for propaganda? The Sun editorial staff confirmed the page was paid content.”

DeSmog Canada’s complaint with the ad standards agency cited Clause 2 “Disguised Advertising Techniques,” which states: “No advertisement shall be presented in a format or style that conceals its commercial intent.”

After two months, Advertising Standards Canada sent a written reply to DeSmog Canada indicating that it had decided not to issue a ruling against Postmedia.

Since the complaint was filed, the article has been removed from the Vancouver Sun’s website. 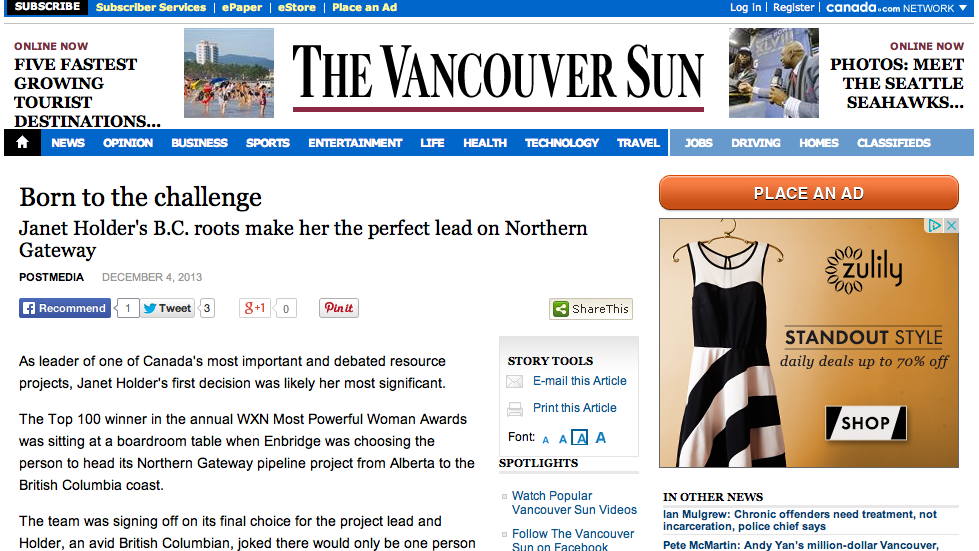 A screen grab of the paid article on the Vancouver Sun website, before it was removed.

However, on March 7, the same thing happened again, this time with a paid advertisement from the Canadian Association of Petroleum Producers (CAPP).

When the ad ran online in the National Post, it was clearly labelled with this disclaimer: “This content was developed by Postmedia’s advertising department in collaboration with a client. Though it does not mention the client’s products or services, the client was involved in the creative direction of the content and reviewed it before publication.” 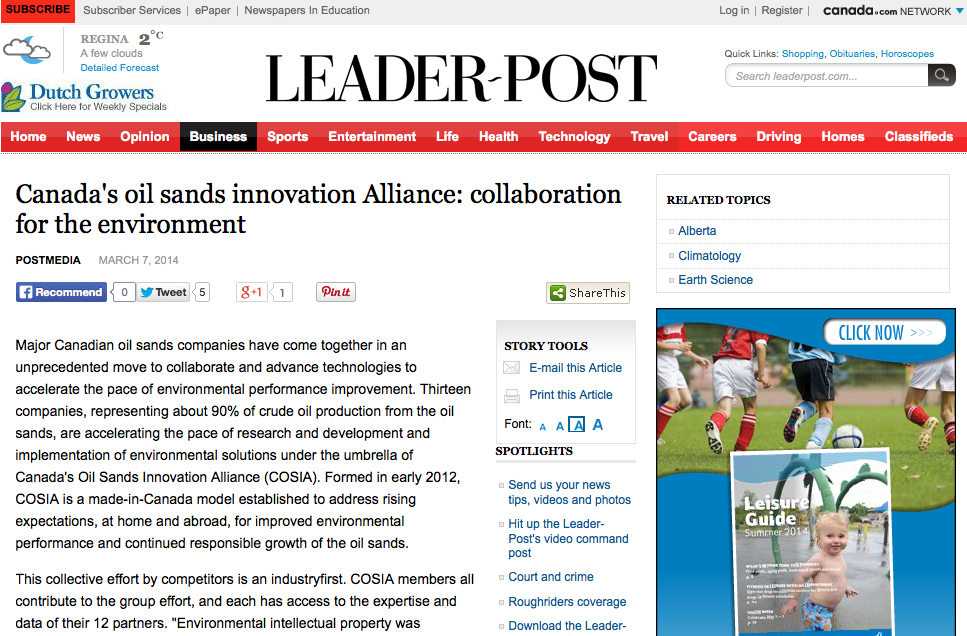 The unmarked, paid story begins: “Major Canadian oil sands companies have come together in an unprecedented move to collaborate and advance technologies to accelerate the pace of environmental performance improvement.”

Postmedia owns nearly every broadsheet daily in the country, including the Vancouver Sun, The Province, the Calgary Herald, the Edmonton Journal, the Regina Leader-Post, the Saskatoon Star-Phoenix, the Ottawa Citizen, the Montreal Gazette and the National Post.

Sean Holman, founder of Public Eye and a journalism professor at Mount Royal University in Calgary, says media organizations undermine their own value by undertaking such ventures without ensuring content is clearly labeled.

“What I do find tragic is, as we go down this route that we seem to headed down, it is eroding the societal and political value of the content that media institutions are supposed to be producing,” Holman told DeSmog Canada. “I’m not sure the media has thought through the ramifications of that.”

Postmedia, like most newspaper publishers, is in serious financial trouble — laying off staff, shutting down presses and losing tens of millions of dollars.

“Media organizations are trying to do the best job they can to figure out how to make money in this new environment. But I think some of these ventures go down the wrong path,” Holman said. “We enjoy the access that we do because we are supposed to be serving not an advertising purpose, but a political purpose, not a business purpose, but a societal purpose.”

At the same time, Holman asks how news organizations are supposed to make money in a society that does not value journalism in the way it once did.

Postmedia to work with CAPP to amplify “energy mandate”

Earlier this year, the Vancouver Observer reported on a Postmedia presentation that outlined a content strategy that includes several Financial Post “Special Report” sections, with topics to be arranged by Postmedia and the Canadian Association of Petroleum Producers.

The partnership also includes 12 single-page “joint venture” features in newspapers across the country. Those are different from “special reports” in that CAPP fully directs the topics and Postmedia writers just pen them.

If the features were properly marked as paid content, that would be one thing — but at least two paid articles appear to have slipped between the cracks.

Add to that the tone of the leaked Postmedia presentation, which is graphically designed to follow the route of a cartoon pipeline (snazzy!) and includes this note from Douglas Kelly, the publisher of the National Post:

“From its inception, the National Post has been one of the country’s leading voices on the importance of energy to Canada’s business competitiveness internationally and our economic well being in general. We will work with CAPP to amplify our energy mandate and to be part of the solution to keep Canada competitive in the global marketplace. The National Post will undertake to leverage all means editorially, technically and creatively to further this critical conversation.”

Huh. You almost get the impression that Postmedia sees itself as being on the same team as CAPP — which is rather disconcerting.

Let’s say a Postmedia reporter ran across a contrary piece of information, like the fact the oilsands industry only actually accounts for about two per cent of Canada’s GDP, a quarter of the contribution of the charitable and non-profit sector? How would that fit into Postmedia’s “energy mandate” to keep “Canada competitive in the global marketplace?”

To be fair, the presentation to CAPP was meant to cajole an advertiser to spend big bucks, not for public eyes. Even the unlabelled articles online could very well have been left unlabelled by error.

But the fact is, it doesn’t look good. Readers expect news organizations to maintain their first loyalty to citizens. As outlined in the Pew Reseach Centre’s nine core principles of journalism:

While news organizations answer to many constituencies, including advertisers and shareholders, the journalists in those organizations must maintain allegiance to citizens and the larger public interest above any other if they are to provide the news without fear or favor. This commitment to citizens first is the basis of a news organization’s credibility, the implied covenant that tells the audience the coverage is not slanted for friends or advertisers.

When media companies appear to lose track of that commitment to the public interest, they lose the trust of their readers — which undermines their own business. But more than that, it casts a pall over the good work of their journalists who continue to serve the public interest even as the traditional media industry crumbles around them — and that’s likely the biggest tragedy of all.

—With files from Emma Gilchrist.

Hospital vs. headwaters: Ontario’s Durham Region battles over the future of Carruthers Creek

Pickering wants to build a hospital that could increase flood risk downstream in Ajax, on...