The Psyche Behind Canada’s Environmental Apathy

Recent Environment Canada reports show that the Harper administration does not have the policies in place necessary to meet Canada’s existing environmental commitments, which have already been criticised as being the feeblest in the industrialised world. For instance, Canada was the only country to weaken its climate target under the Copenhagen Accord, and has since become the only country to formally withdrawal from the Kyoto Protocol.

Even more concerning, according to the 2013 Climate Change Performance Index—a look at emissions levels, emissions trends, energy efficiency, efforts at renewable energy, and government climate policies of the world’s 61 highest CO2 emitting nations administered by the Climate Action Network—Canada ranked a dismal 58th, trailed only by Kazakhstan, Iran and Saudi Arabia, it was worst performance of any developed country by a long shot.

“At a time when institutions such as the World Bank and the International Energy Agency are calling for more climate action it is disappointing to have so many countries still being reluctant to move forward,” said Wendel Trio, Director of the European-based Climate Action Network and lead investigator for the 2013 Climate Change Performance Index, “Canada is a strong example of this lack of willingness to improve climate policies.”


“Canada has become the poster child for climate inaction, which represents a really long fall from where we were less than a decade ago,” added Patrick Bonin, Lead Climate-Energy and Arctic Campaigner at Greenpeace Canada. “It has been hard to watch the unraveling of a rational and reasonable approach to science, while at the same time seeing more devastating extreme weather impacts all around us, it just makes you wonder what it is going to take for this government to get it.”

“The world has had enough of Canada’s inaction on climate change," concluded Steven Guilbeault, Co-Founder and Senior Director of the Montreal-based NGO Equiterre, “It is clear that this government’s reckless fixation on the tar sands is going to cost us not only a safe and healthy future and economy for our children, but also our international credibility.”

Take a minute to digest what the above experts are saying. Canada’s environmental actions, or lack thereof, are becoming so egregious that we are being left on the sidelines of global climate progress. What’s more, the only environmental achievement Canada can boast is winning the satirical “Colossal Fossil” award a record 5-times in a row—an "award" given to the country that contributes the most per-capita to global warming over the previous year.
Of course the obvious question here is why all the environmental apathy? We know climate change has the potential to be absolutely catastrophic for our species, so why, with all the resources at a country like Canada’s disposal, do developed governments—and by extension the populations who elected them—choose to largely ignore the realities of climate change? 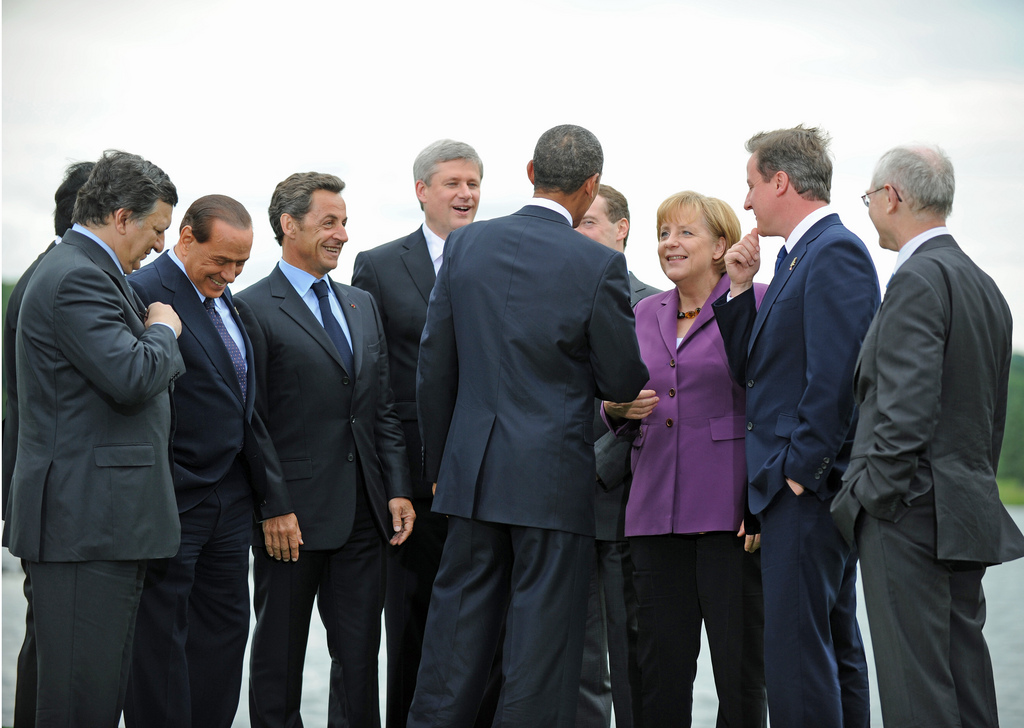 The inner circle of environmental apathy. Image Credit: The Prime Minister's Office/Flickr
Is it misinformation? Indifference? Ignorance? These play a part for sure, but more and more research is coming to light which posits that the major reason capable, industrialised governments such as Canada’s are unable to realise any serious commitments to combating climate change has to do with something psychologists refer to as hyperbolic discounting.
Also known as current moment bias, hyperbolic discounting is a cognitive bias in which people, given two similar rewards, will show a preference for one arriving sooner rather than later. Translation—we have a really hard time imagining ourselves in the future and altering our behaviours and expectations accordingly. As such, most people usually opt for gratification now, while leaving discomfort for later—a serious psychological deficiency when considering the environmental consequences of such a short-term way of thinking.
“Now or Never: Environmental Protection Under Hyperbolic Discounting,” a working paper by Dr. Ralph Winkler of the Swiss Federal Institute of Technology, builds on the correlation between hyperbolic discounting and administrative environmental apathy by arguing that the main reason developed governments struggle to implement stringent forward-thinking environmental policies is because both presidential and parliamentary democratic systems are by their very nature, set up to reward short-sighted and current-moment policymaking.
Think about it. In most countries—Canada included due to the Harper administration’s passing of Bill C-16 in late 2006—elections are set on a maximum 4-year cycle. So while regular elections are obviously important in a democratic society, in order to have the best chance at re-election, the party in power has to trade smarter, more progressive long-term solutions that require some immediate sacrifices, for instantly gratifying short-term gains.
Time and again when leaders institute forward-thinking policies requiring voters to give up something relatively minor in the short-term, current moment bias-suffering voters prefer to reward them with a drop in the opinion polls. So instead of a 20-year strategy to reduce Canada’s reliance on fossil fuels—a proposal that might require increased investment via taxation at the outset—we get a commercially flashy yet insignificant economic action plan. 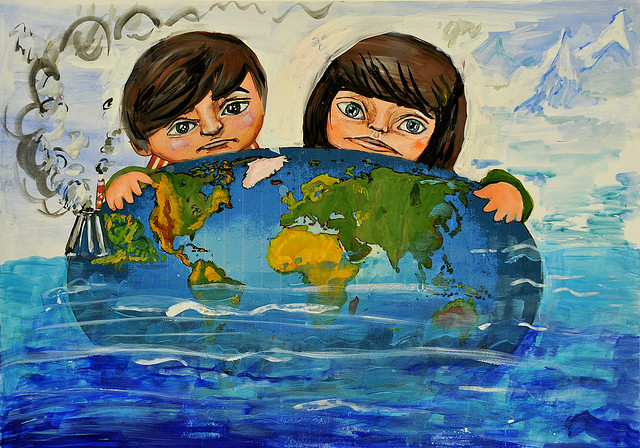 The future victims of our shortsightedness. Image Credit: UNDP in Europe and Central Asia/Flickr
Instead of a government securing both Canada’s and our planet’s sustainability by investing long-term in renewable resources, alternative energies, and information technologies, we get shortcuts, quick returns, and policies meant to make our country look good 10 months from now, as opposed to 10 years from now. Yet look where all this short-term thinking has gotten us—stalled growth, rising debt, a shrinking middle class, an expanding disparity gap, and the most embarrassing scientific and environmental records of all developed countries.
The good news is that the best way to resist falling into the current moment bias trap is to be aware of our cognitive shortcomings. Context is key, this means reminding ourselves—and by extension our politicians—that political and geological time are different. Short-term sacrifices today can yield more returns in the long-run, but only if progressive policies take precedent over the relative triviality of temporary things like re-election campaigns.
We’ve got much work to do. The majority of policymakers agree that highly industrialised and over-consumptive developed countries are the ones largely responsible for climate change—Canadians for example, produce more garbage per capita than any other nation on Earth—and as such, developed countries are also responsible for mitigating its impact.
It all starts with the average voter realising that a democracy is a reflection of the wills of its people. If an electorate are selfish and shortsighted, the country’s policies will reflect as much. For all our sakes, let’s hope that if we start asking for some more long-term thinking from our government, that policy-reflecting-people trend can work the other way as well.
Image Credit: beelaineo/Flickr
We hear it time and time again:
“These are the stories that need to be told and you are some of the only ones telling them,” John, a new member of The Narwhal, wrote in to say.

Adam Kingsmith
Adam is a PhD student in political science at York University in Toronto, where his research explores the nexus of technology and ...