When the B.C. Ministry of Environment approved Rio Tinto Alcan’s application to modernize its aluminum smelter in Kitimat, B.C., local resident Emily Toews assumed that would mean an improvement in the plant’s emissions.

But the modernization project, which will increase the plant’s production, will raise sulphur dioxide (SO2) emissions by 56 per cent from 27 to 42 tonnes per day.

Toews, who suffers from asthma, told a tribunal in Kitimat Monday she decided to remain in Kitimat in 2010, rather than move to West Kelowna with her husband, because she had “previous knowledge that the modernization project would reduce emissions.”

The tribunal, hosted by the B.C. Environmental Appeals Board, is entering its third week in Kitimat after two weeks in Victoria. The board began investigating the government's approval of the Rio Tinto Alcan modernization project after Toews and fellow Kitimat resident Lis Stannus asked it to overturn the decision, saying increased sulphur dioxide emissions endangered their community's health.

The project, granted approval from the B.C. government in 2013, will reduce greenhouse gas emissions from the smelter, but not sulphur dioxide emissions because Rio Tinto Alcan was not required to introduce scrubbers, commonly used in smelters to remove the pollutant from airborne emissions.

Toews, who has a 10-month old child and is a kindergarten teacher, said she’s worried about the impact the increased pollution will have on the community’s children.

She told the tribunal that several children in the Kitimat school where she teaches suffer from asthma.

“Working at an elementary school there are a lot of illnesses going around,” she said. “During allergy season I often have to help kids, or help administer their medication before they go outdoors.”

”I’m concerned for other people in the community,“ she said. 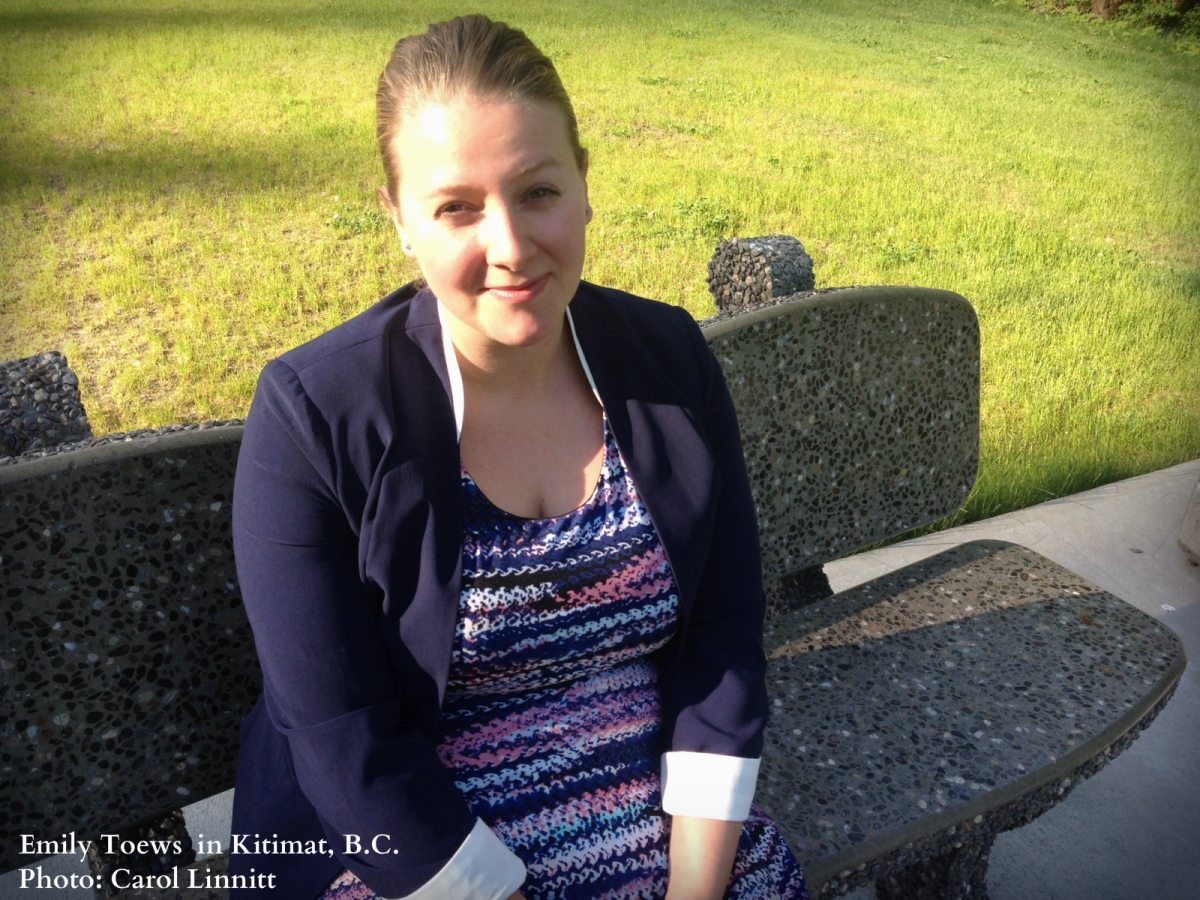 Toews questioned why, if solutions like scrubbers are a possibility, the province didn’t require them when approving the smelter modernization project.

Scrubbers, which can either create dry sulphur waste or can use seawater which converts SO2 to sulfates for a benign release into the ocean, are commonly used in European smelters.

Toews told the panel she cannot see why the province wouldn’t require Rio Tinto Alcan to employ scrubbers to eliminate the SO2 emissions problem in Kitimat.

An expert witness who previously gave testimony during the hearings told the panel Rio Tinto Alcan was avoiding paying for the installment of scrubbers and thereby externalizing the costs of SO2 emissions onto the health of local households.

Chris Tollefson, a lawyer representing Toews’ co-apellant Lis Stannus, said the company is primed to install scrubbers in a “plug and play” manner.

“There’s no dispute on the evidence that these scrubbers can be installed with relative ease,” he told the panel. “In fact, the [Kitimat modernization project] has been designed and built with an onsite area specifically set aside for scrubbers to be retrofitted…on what the experts describe is a ‘plug and play’ basis.”

Tollefson said the company’s issue with scrubbers is cost — an estimated $100 to $200 million for installment, not including operating costs. The company estimated the modernization project would cost $3.3 billion but overruns have the project nearing $5 billion last summer.

Rio Tinto Alcan has “made this very clear to the provincial government…that they simply do not want to spend the money.” Government officials from the B.C. Ministry of Environment were also too concerned with Rio Tinto’s interests, Tollefson previously argued, alleging the project’s approval without scrubbers at the provincial level is the result of regulatory capture.

Tollefson said he is asking the panel to “weigh the financial benefit to Rio Tinto Alcan of not being held to a rigorous environmental standard against the cost to the environment and human health of allowing Rio Tinto Alcan to increase its SO2 emissions by 56 per cent.”

The hearings, conducted by the B.C. Environmental Appeals Board, are currently underway in Kitimat.

In the first analysis of its kind, a national report shows how all provinces and...